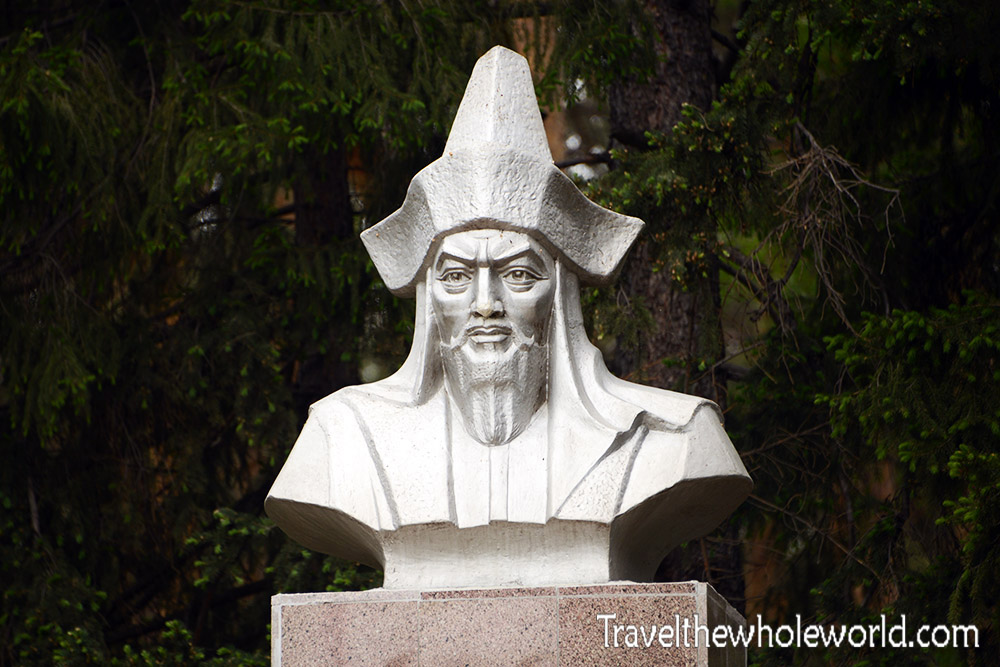 At the extreme norther borders of Kazakhstan you’ll find Burabay National Park. The park isn’t too well known outside of the country, so I showed up not knowing what to expect. Right at the park entrance is this bust of someone who I couldn’t identify, but assume it’s some historic person from the area or even someone who conquered the region long ago. For all I know the park is named after him! Deeper in the Burabay I also came across this stele photographed below. The problem with traveling solo and not speaking the local language means that most of these things I come across will never be known. 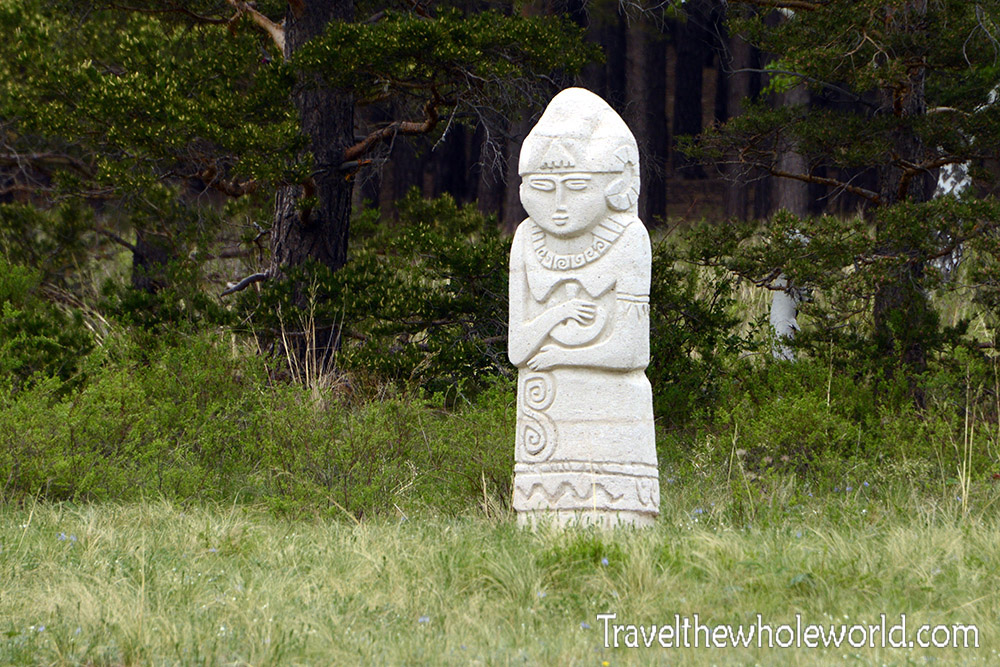 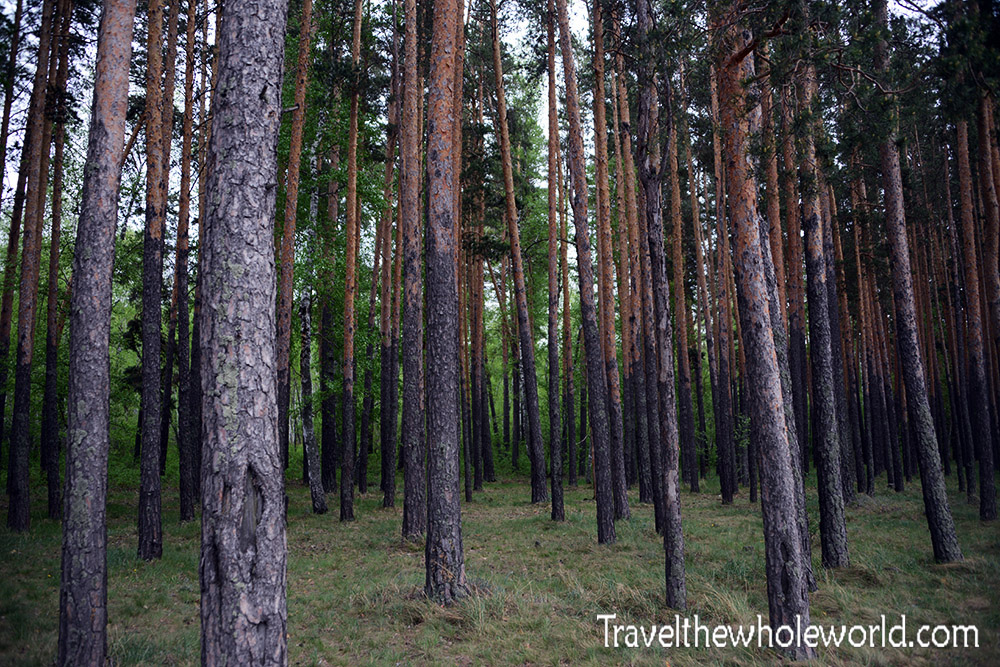 About 250 kilometers north of Kazakhstan’s capital of Astana, you’ll find Burabay national park. Officially, most sources consider Siberia to be only within Russia’s borders, while others also consider north central Kazakhstan to be Siberia as well. The latitude here is much farther north than other parts of Russia’s Siberia, and the ecosystem and terrain is also the same. Seeing all of the evergreens and mountains was a much different experience from what I saw in Kazakhstan’s empty plains further south. Here are two photos of the forests that I came across while hiking. The first photo seemed to be regrowth, because I saw these trees mostly along the roads. The photo below was taken deeper along a trail with a larger variety of plants. Like a hike I did in Alaska, the mosquitoes here were horrible! 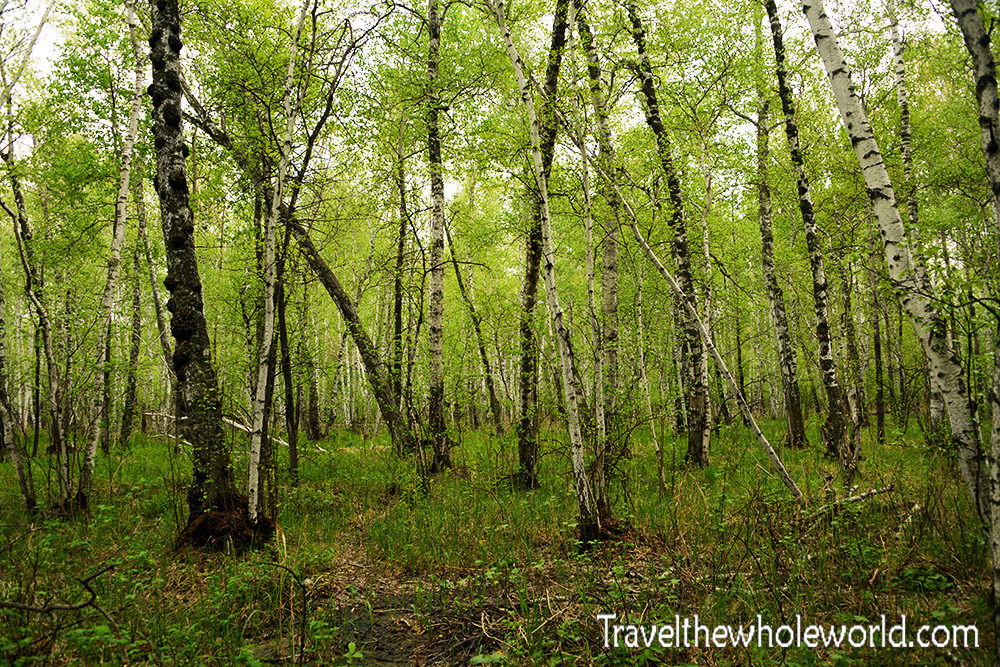 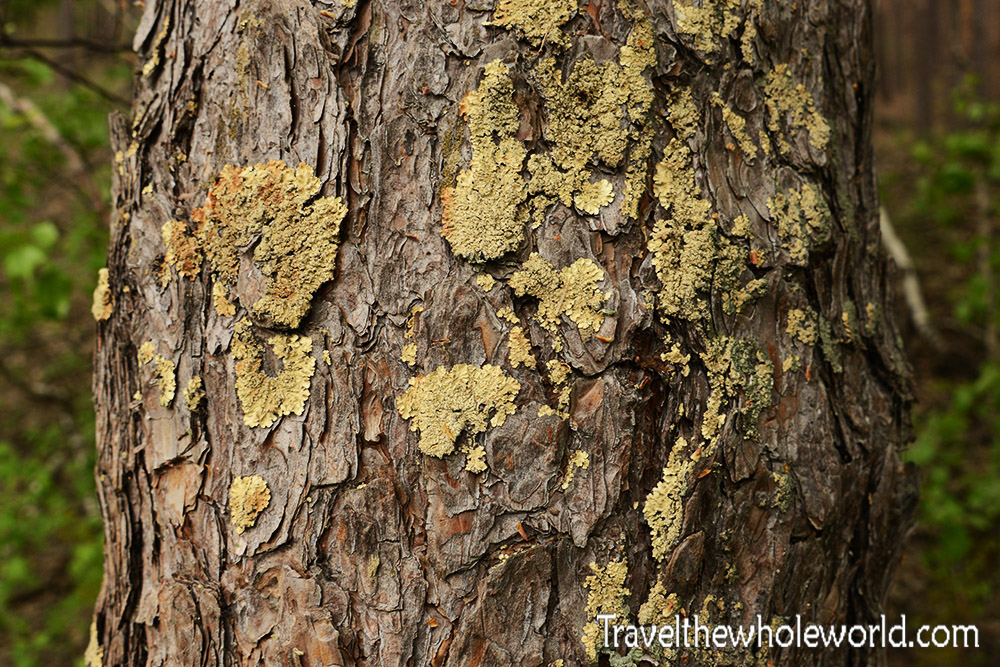 Burabay Park also had these white barked trees that are popular in northern climates in places like Minnesota and Michigan continuing all the way north through Alaska and Canada. I actually didn’t really realize how far north I was until I later looked up Burabay on a map. If I was at the same longitude in North America, I’d be about 700 miles north of the city of Toronto Canada! 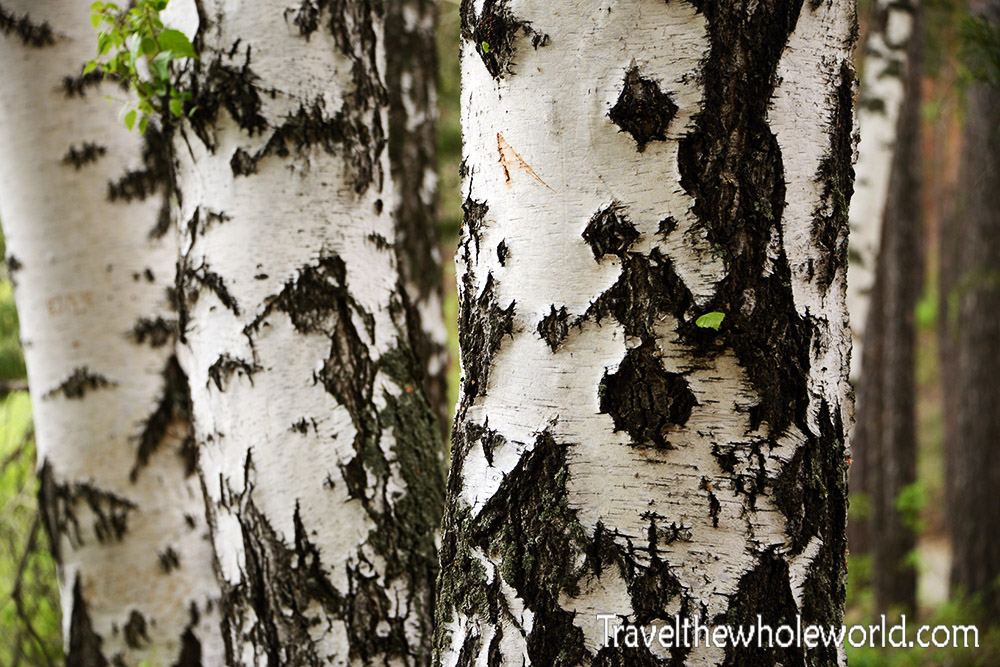 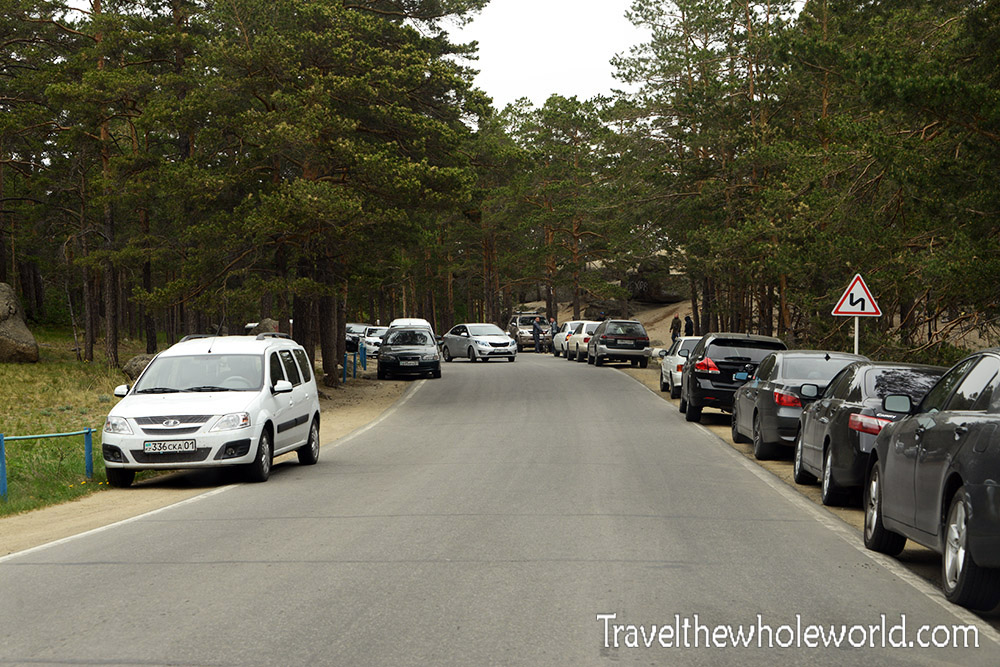 To be honest, I figured I’d be a rare visitor to Burabay and have the entire place to myself. The park was surprisingly crowded at certain parts. Most of the scenic areas of the lake had dozens of cars parked long the side of the road. Further into Burabay there is a large open field and a few stands selling food and ice cream. There were lots of families here going on picnics, playing sports and just enjoying the cool spring day. 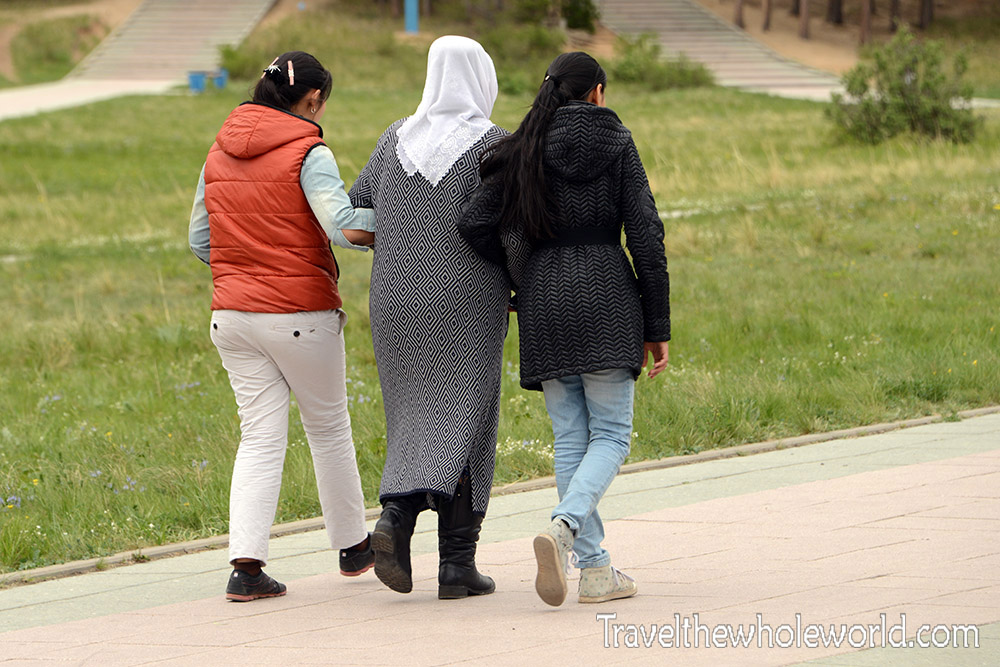 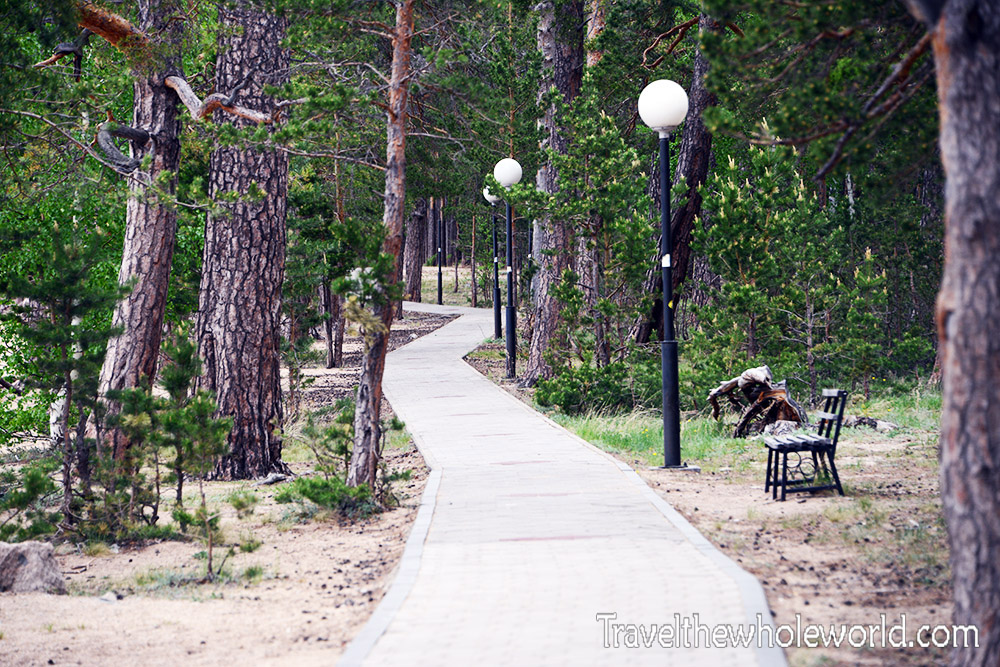 The park is pretty well maintained, with several hiking trails in the woods and some more casual walks like these along the lake. There were lots of large groups of Kazakhs along the trails that seemed like they were school field trips or organized tours. 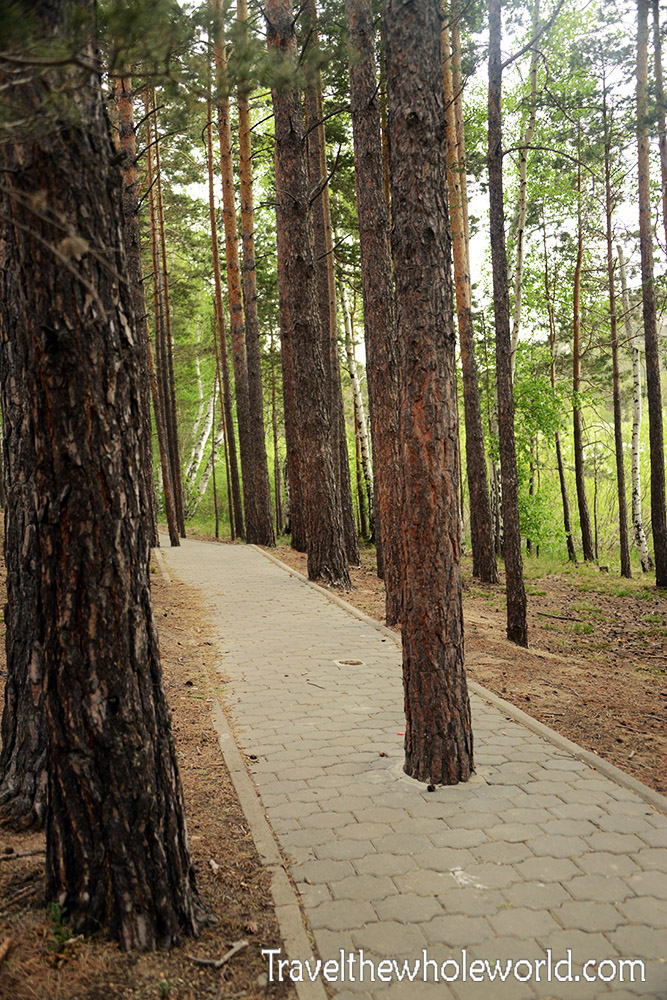 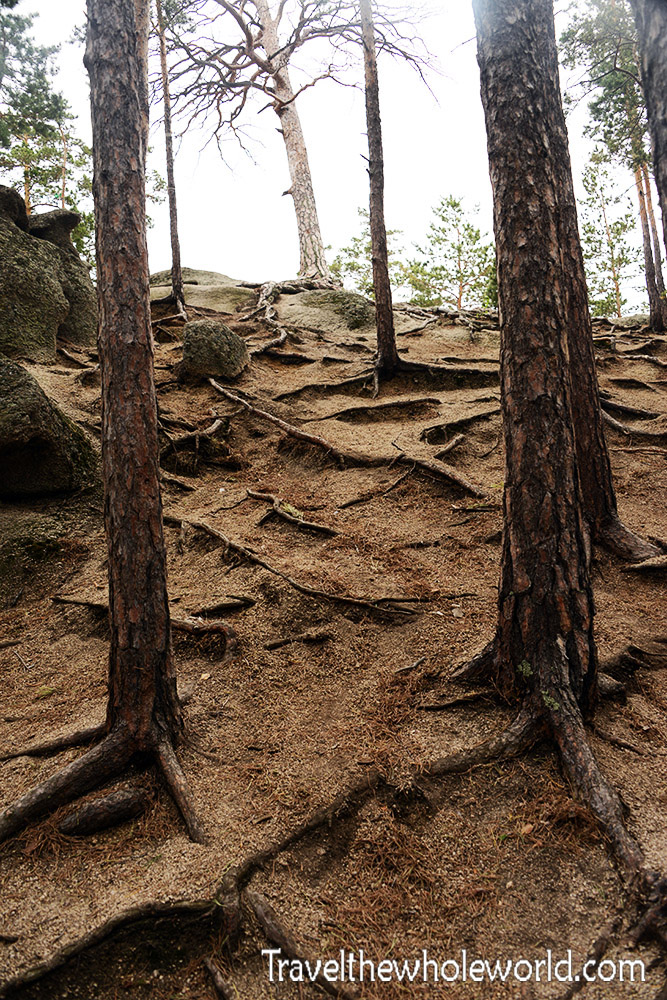 Most of the terrain off the trails is very rocky and steep in Burabay. The roots above are exposed due to water run off from the steep hill they are on. Hiking off trail would definitely be a major challenge here. I’m really curious about what this place might look like in the winter time! 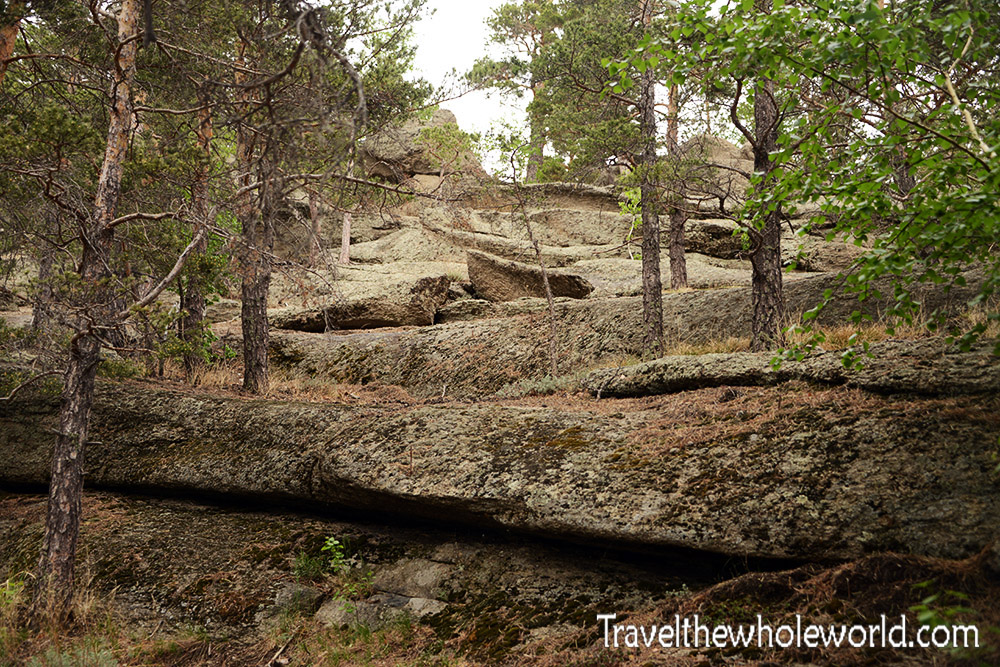 There are also some great scrambling routes here and I’m sure there would be some excellent rock climbing routes too. Had I brought my climbing harness I would have loved to scale some of the rocky walls I came across. I’m sure in time that will probably be developed out here as well! 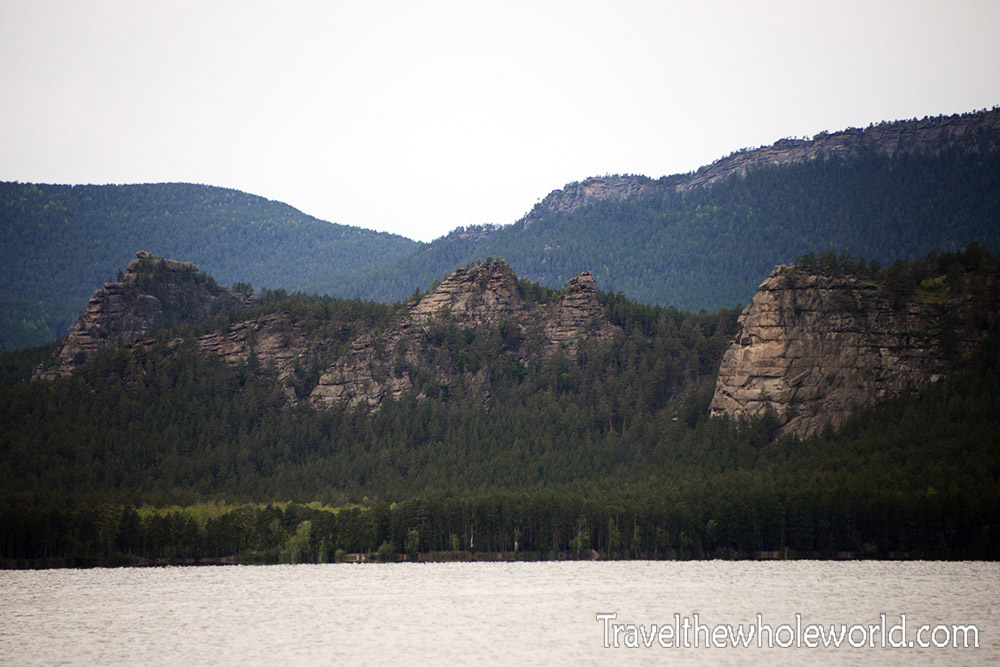 I visited the forest in May when the temperatures where in the 50s or about 10C. At night it actually went down to freezing! The colder weather and overcast skies removed some of the beauty from the scenery, but that’s Siberia for you. These photos above show the lake photographed from the south side. It was strange to be so far north and away from the ocean and come across a small sandy beach shown below. 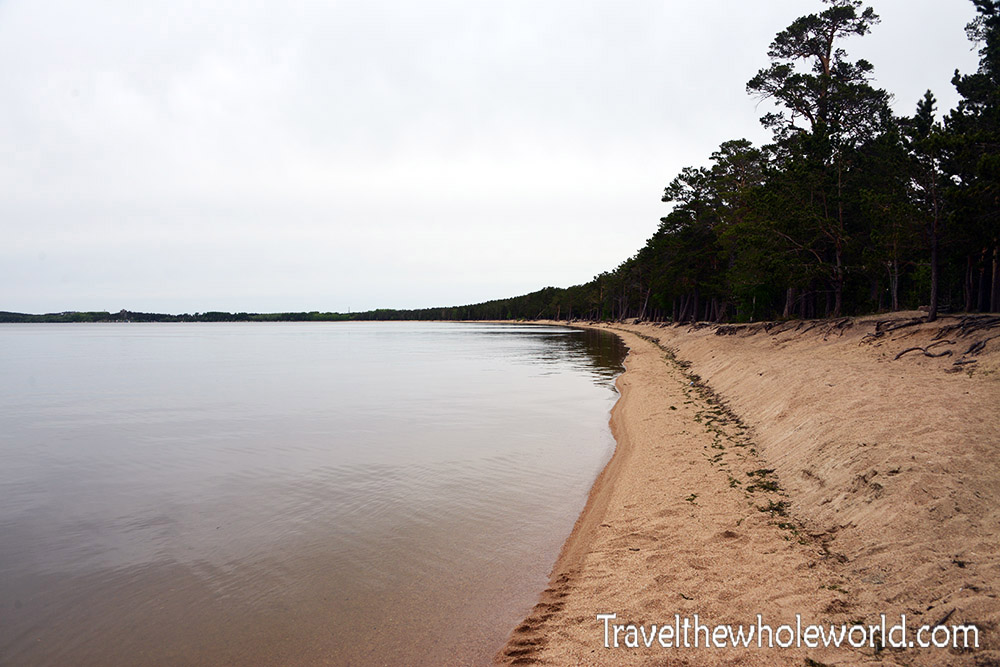 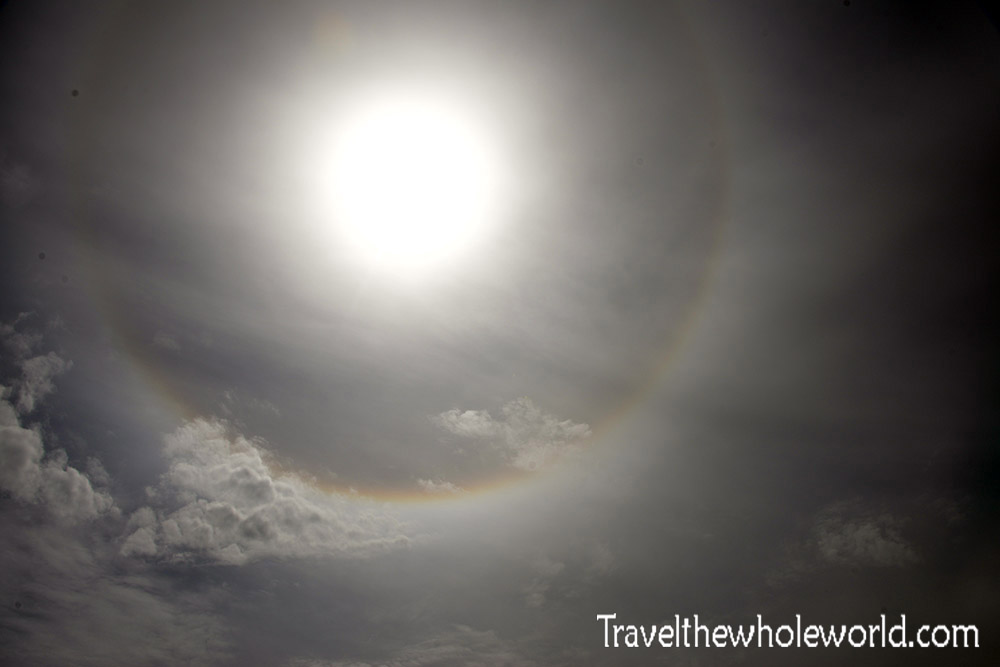 There are lots of islands in the lake, but the sky itself held largest sun halo I had ever seen in my life! Below is one of the smaller rocky islands located in one of the bays. You can rent boats and several families pulled up to the island and climbed to the top. 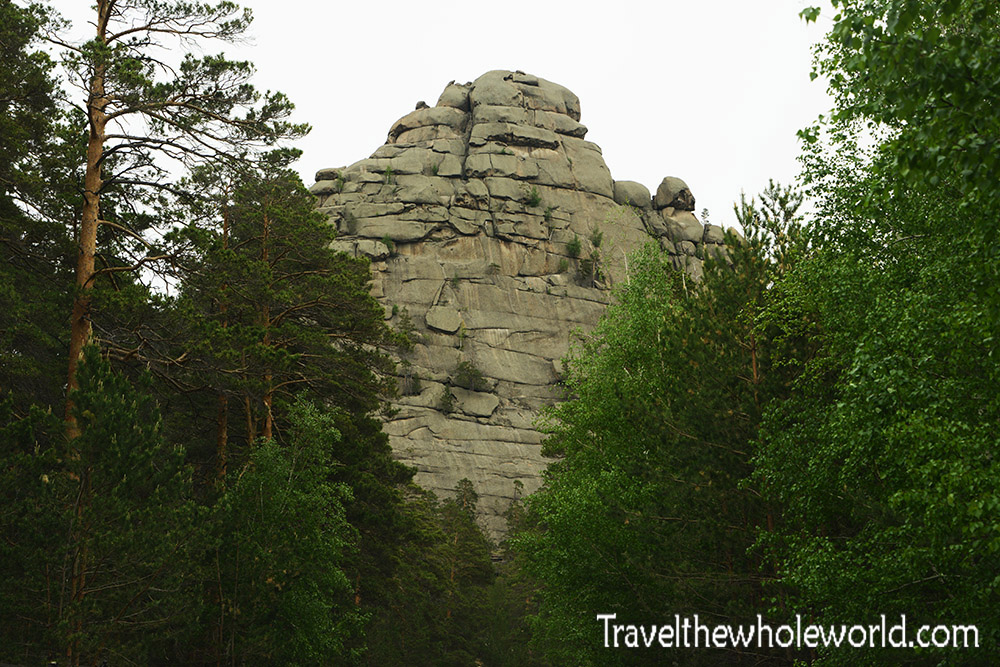 These surrounding photos are the most scenic parts of the park that I came across. I imagine this place is exceptionally beautiful in the winter when everything is covered in deep snow and the lake is frozen solid. The photo below is the most famous sight in the park, this unique pyramid shaped mountain. When I first saw it from a distance, I seriously thought this was the remains of an ancient castle. From far away it looked more like a stoned wall created by people than a natural phenomenon. I’ve even heard some call this area the Switzerland of Kazakhstan, which would be a major overstatement as the highest mountain here is less than 1,000 feet (300 meters)! 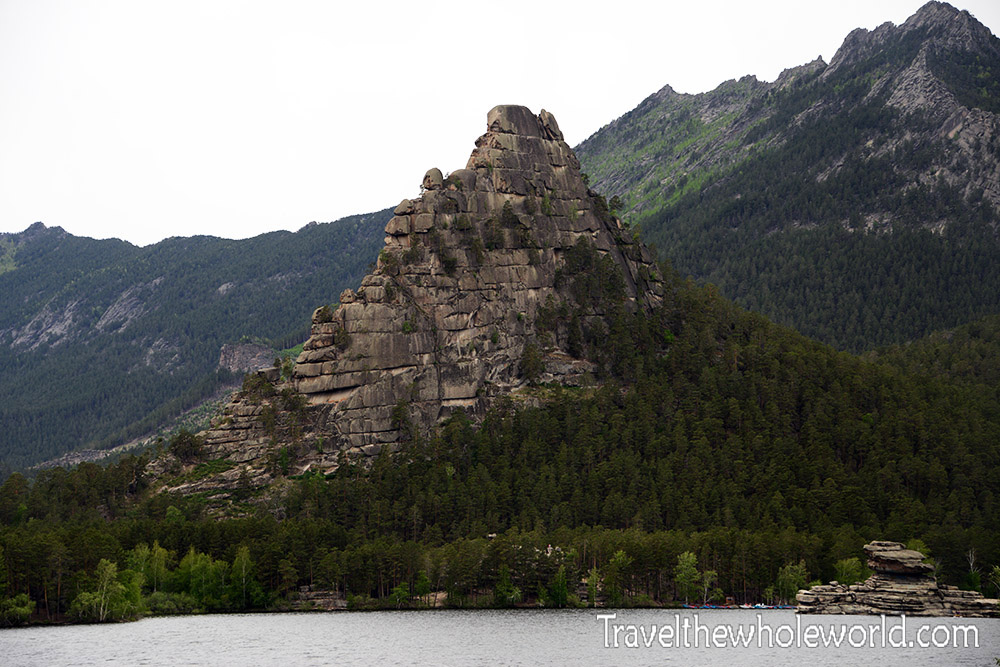