Despite being surrounded by some crazy neighbors. Jordan is one of the most peaceful and stable countries in the Middle East. Also known as the Hashemite Kingdom, Jordan is ruled by King Abdullah II and Queen Rania. Most travelers don’t see Jordan as a travel destination, and they are certainly missing out! Jordan’s highlight is one of the Seven Wonders of the World; the ancient city of Petra. As amazing as Petra is, you can still find countless other interesting places and activities, such as the capital of Amman, the Dead Sea where Jesus was baptized, the traditional desert life in Wadi Rum, and even scuba diving in the Red Sea! 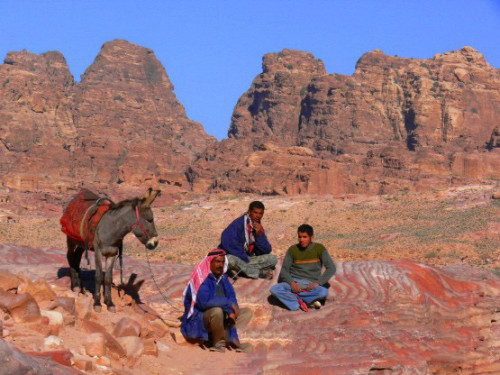 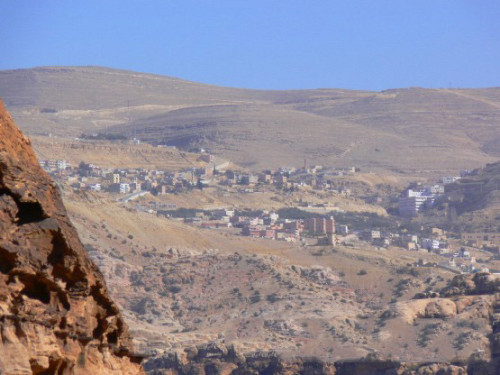 My visit to Jordan actually wasn’t planned. I had been in Egypt and when I found out there was a ferry available to take me across the Red Sea, I couldn’t resist the chance to see Petra. The boat ride wasn’t very long, although it was a bit chaotic. Once in Jordan I headed out to a small desert town where I spent the night. Above is a photo of some Jordanians taking a break in the mountains along with their donkey. I hadn’t though Jordan of being mountainous, but they certainly have some beautiful terrain! 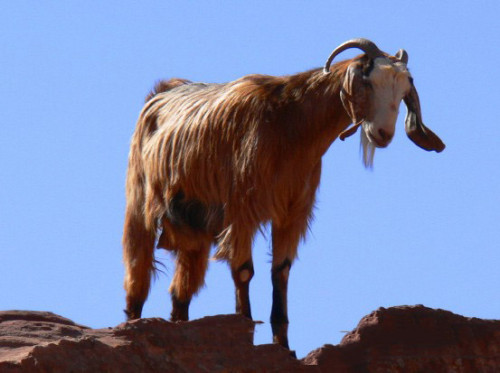 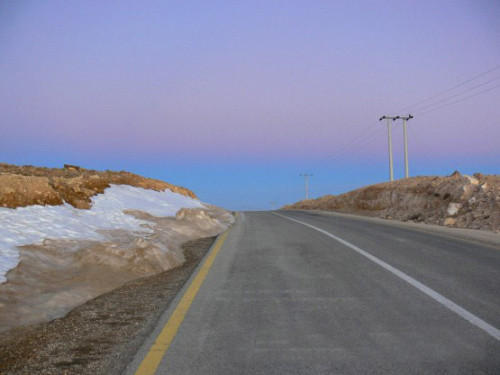 Seeing Jordan’s beautiful mountains wasn’t expected but still not much of a surprise. Driving higher up in the mountains and starting to see snow was definitely a different story! Since Jordan is in the middle east it has the typical animals like goats, donkeys and camels. On the left is a goat I saw up in the mountains. On the right is a lot of snow and ice on the side of the highway. I was told that 3 weeks earlier they had a huge snow storm that closed the road for 6 days. 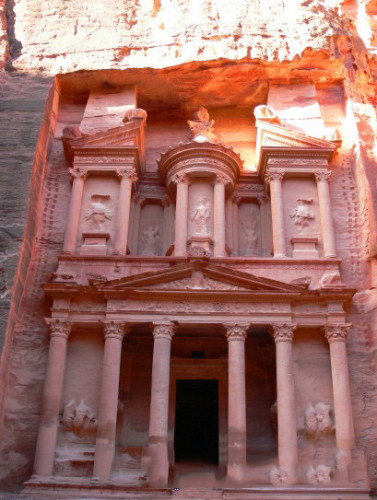 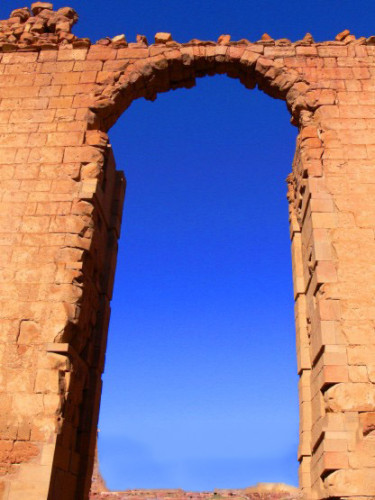 Petra is the ancient capital of the Nabataeans. They were an Arabic group of traders who were able to build a successful city in the desert by controlling the water flow during flash floods and rare rainstorms. Their country continued to other areas such as the northern part of Saudi Arabia. The photo on the upper left is the most famous building in Petra. It is called the Treasury building, and it’s the very first one you’ll encounter if you hike the trail through the city. On the right is a huge arch made in a building. The building itself was pretty much destroyed, but somehow the arch has survived centuries. 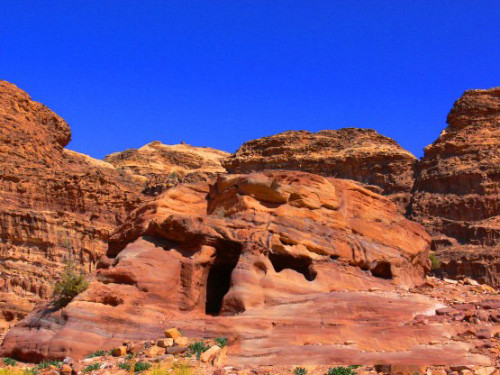 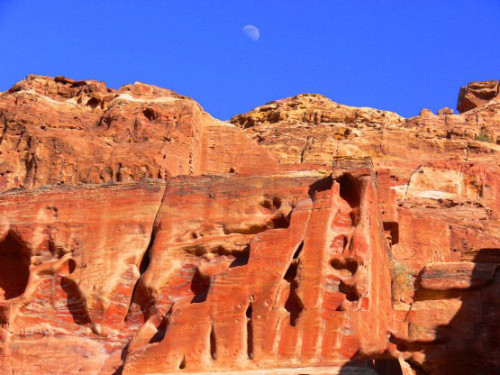 Above you can see an old home carved out of rock in the mountains of Petra. On the right is another small building that I’m not sure what was used for. The step design you is common in Nabataean architecture. 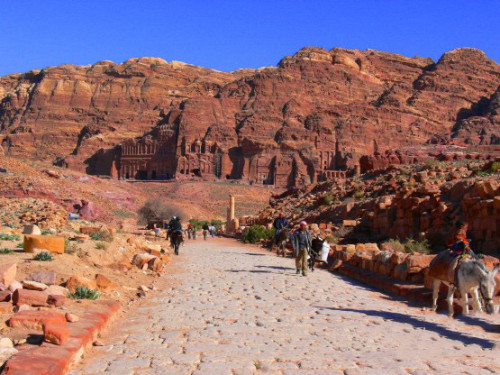 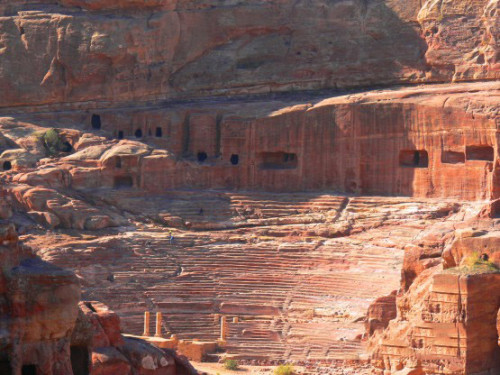 Before I made it to Petra I didn’t know much about it. I had seen the treasury building many times, and honestly I thought that was all there was to this city. The road in Petra goes for miles and miles, and the old buildings and temples don’t die off. On the left is a paved part of the road with many impressive buildings in the background. On the right is a giant theater that was built hundreds of years ago. 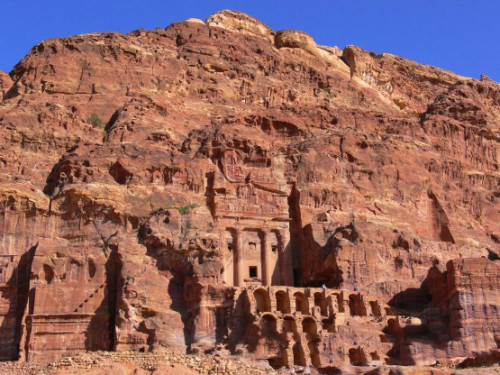 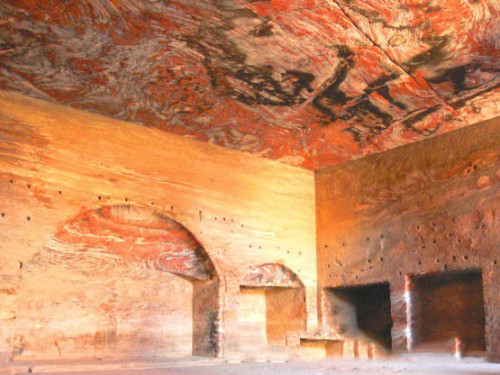 On the left is another large building in Petra. The photo on the right is the inside of the building. The ceiling is naturally colored by the rock of Petra, earning the place the name of the red rose city. 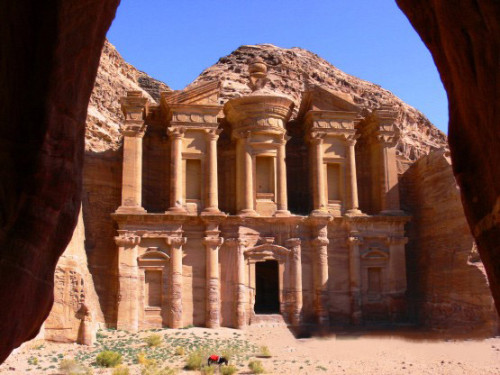 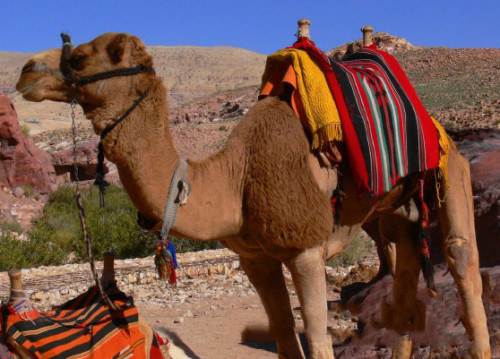 The upper left photo is the chapel in Petra, located up in the mountains at the very end of the path in Petra. The hike itself takes a few hours, so if you’re feeling a little lazy you can ride a camel much of the way there. The path gets a little steep so if you want to ride all the way you’ll need a donkey, which you’ll be offered dozens of times anyway. 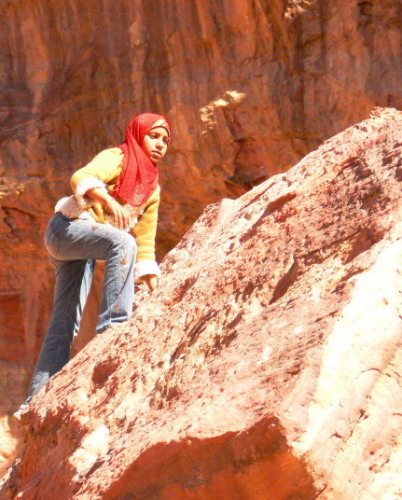 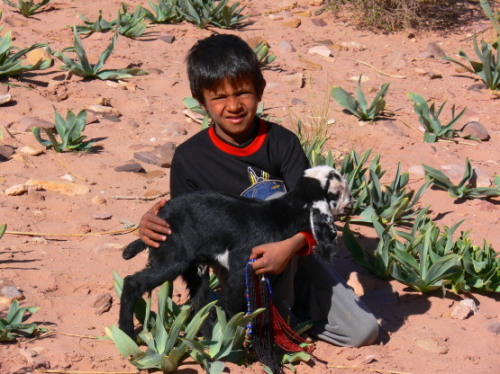 The boy with the lamb is a local who lives in the area, trying to make money off of passing tourists. On the right is a Jordanian girl trying some rock climbing for a better view of Petra. 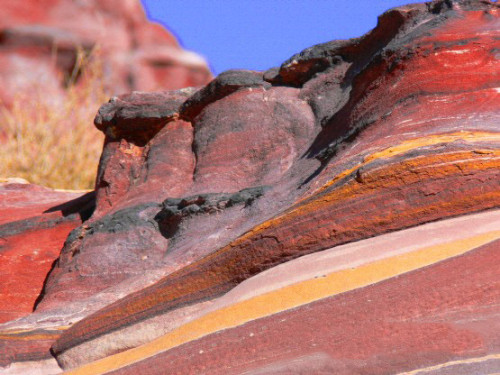 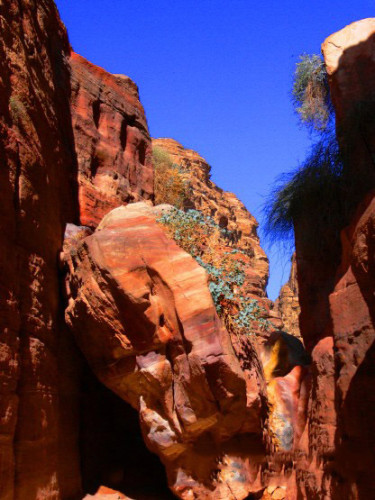 What I liked most about the canyons in Jordan was their colorful rocks. Above is a natural pattern of different shades of yellow to red and brown to black. On the right is a large rock that seems to have fallen into the canyon and has some nice colored plants growing over it. Below is a lizard I saw relaxing on a rock. On the bottom right is a small but very green plant growing between some rocks. 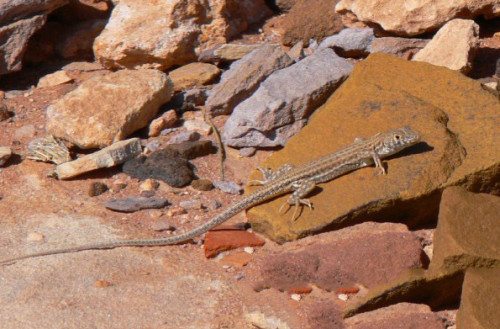 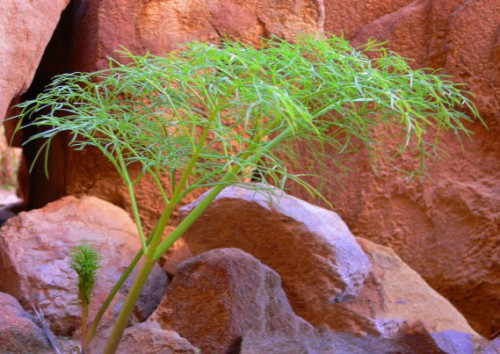 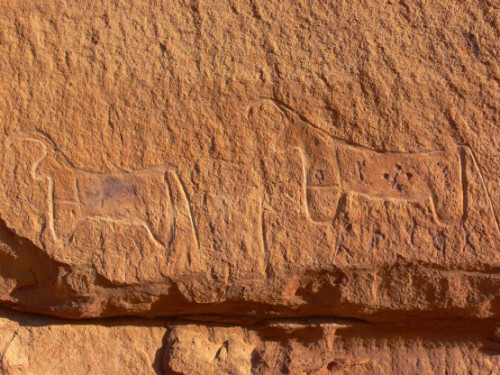 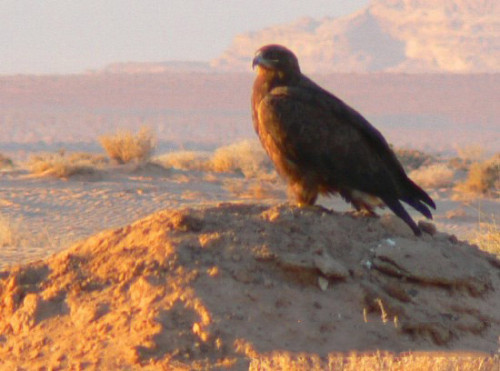 After Petra my next favorite place in Jordan is the desert called Wadi Rum located in the south eastern parts of the country bordering Saudi Arabia. On the right is a large hawk that seemed to be popular throughout Jordan. Jordan – Rock Formations In Wadi Rum Jordan – Mountains In Wadi Rum Wadi Rum has some amazing rock formations. There are many natural bridges as well. The two photos above were taken at different locations inside the desert. Wadi Rum is a good place for hiking and camping. There are many tours that allow you to make camp and get a chance to experience the desert life. 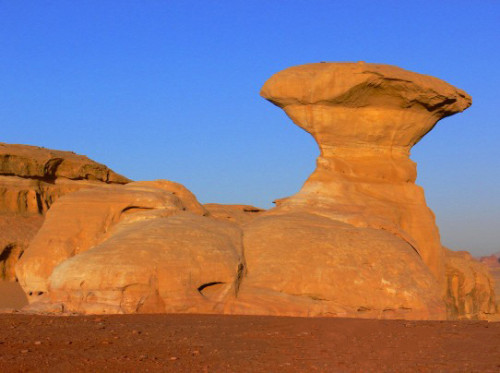 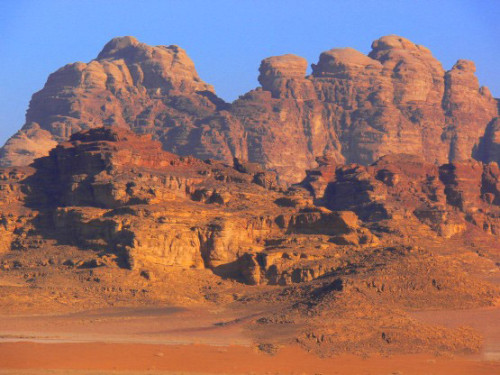 Wadi Rum has some amazing rock formations. There are many natural bridges as well. The two photos above were taken at different locations inside the desert. Wadi Rum is a good place for hiking and camping. There are many tours that allow you to make camp and get a chance to experience the desert life. 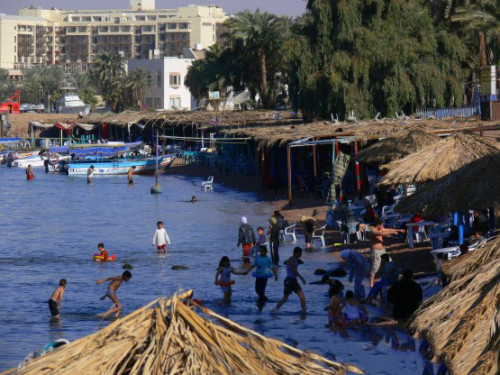 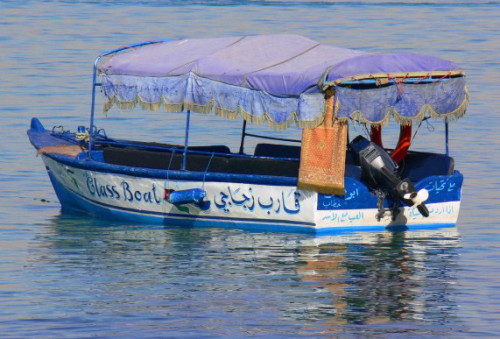 It’s hard to imagine Jordan having access to the world’s oceans because its coastline is so small, but they do in fact have just enough room to build their port city of Aqaba. This was actually my point of entry into Jordan from Egypt. My focus was in visiting Petra, so I didn’t do as much in Aqaba sadly. I do know that the entire city is duty free, so it’s an unexpected great place to do some shopping. Aside from that, there are lots of nice restaurants and night life, and plenty of ocean activities as well. The tropical fish in the Red Sea can be visited on a glass bottom boat tour such as the one photographed above. If you have your license, you can even go scuba diving here!