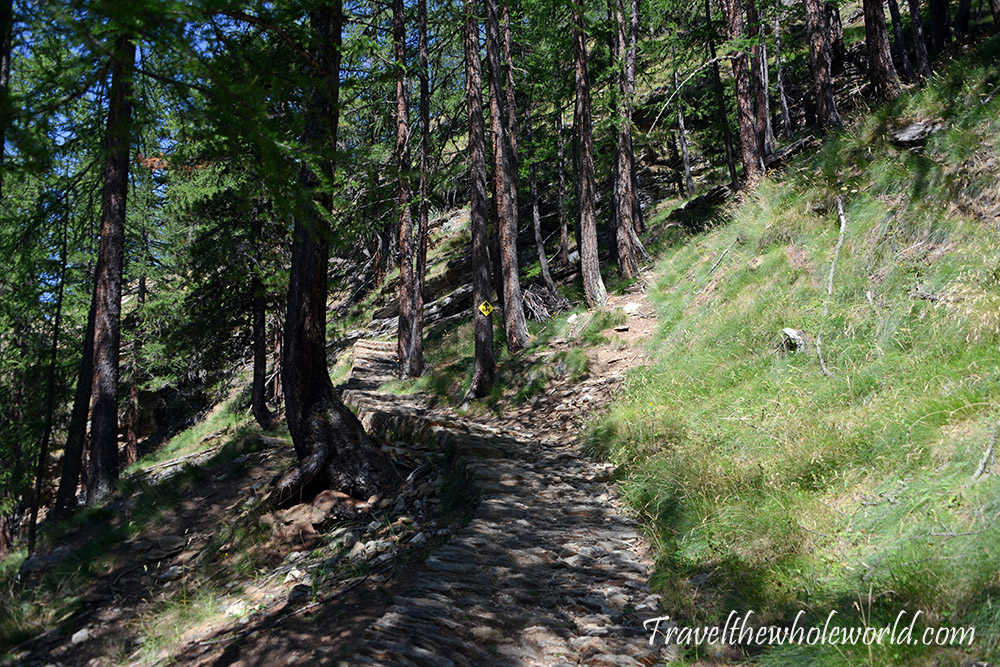 My first climb in Italy! My friend had picked this climb as a warm up for other peaks, and to be honest I didn’t bother reaching much about it before hand. I figured Gran Paradiso was a walk up but the mountain turned out to be more of a legitimate climb than I had thought! There are two main routes up Gran Paradiso which both have their own lodge. The ascent we choose went up the Chabod route which is the less traveled of the two. The climb starts at 6,100 feet (1,850 meters) in pine forest and ascends a steep trail. Even though we went during the middle of the week there were a number of hikers and climbers on the trail. Within an hour we had left the forest and were in the grassy alpine zone, where we could get our first views of the surrounding mountains. 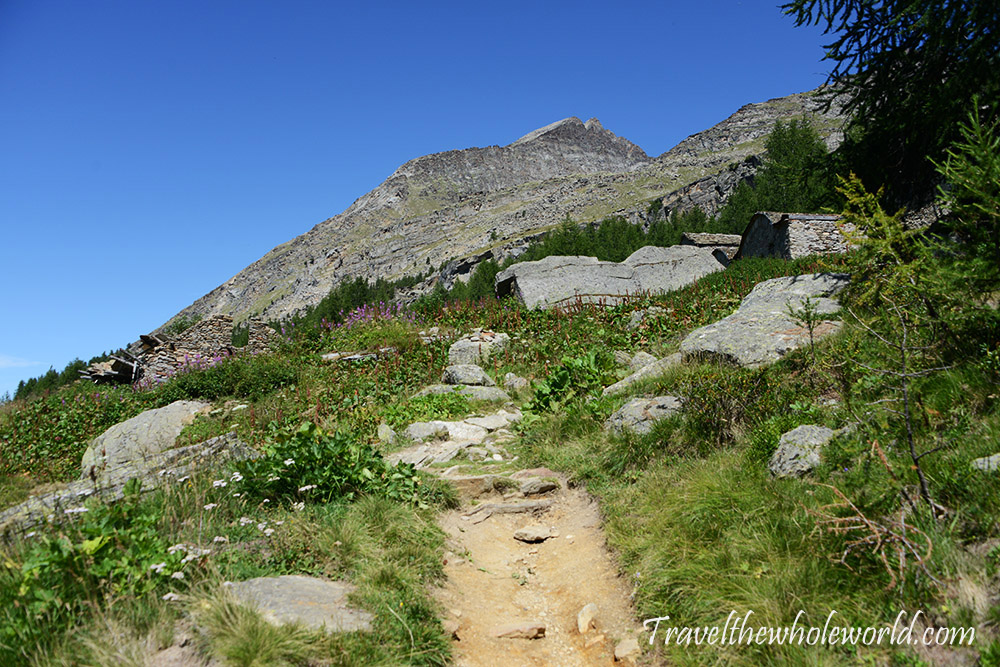 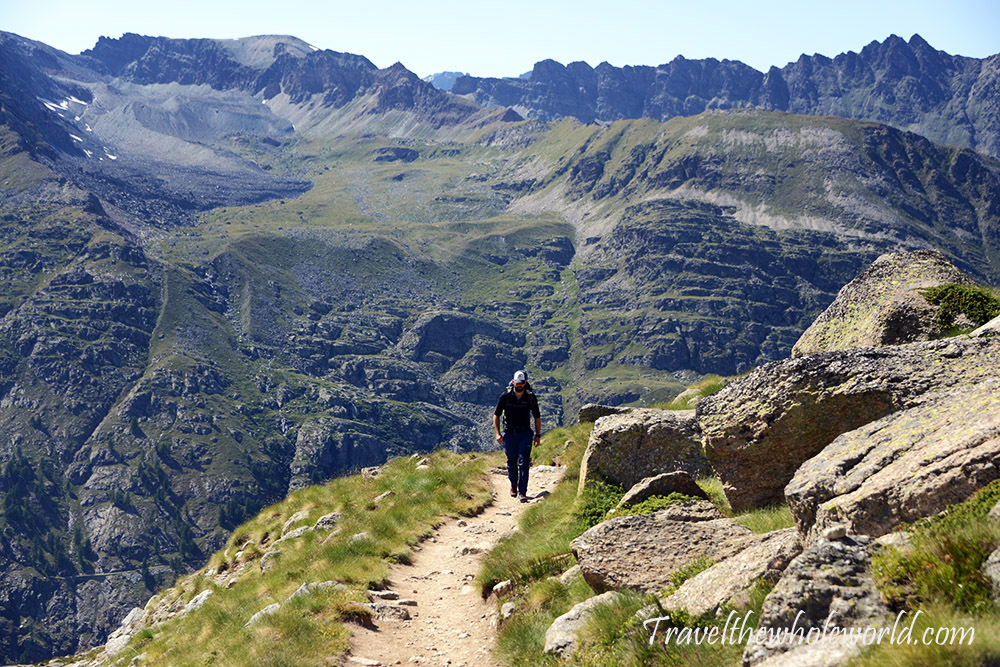 We hiked at a fast pace, and climbed almost 3,000 feet (900 meters) to the lodge in about two hours. My friend is in the photo above, who I’ve now climbed with on three continents. Below is a photo of me on the approach, with Gran Paradiso in the upper right. 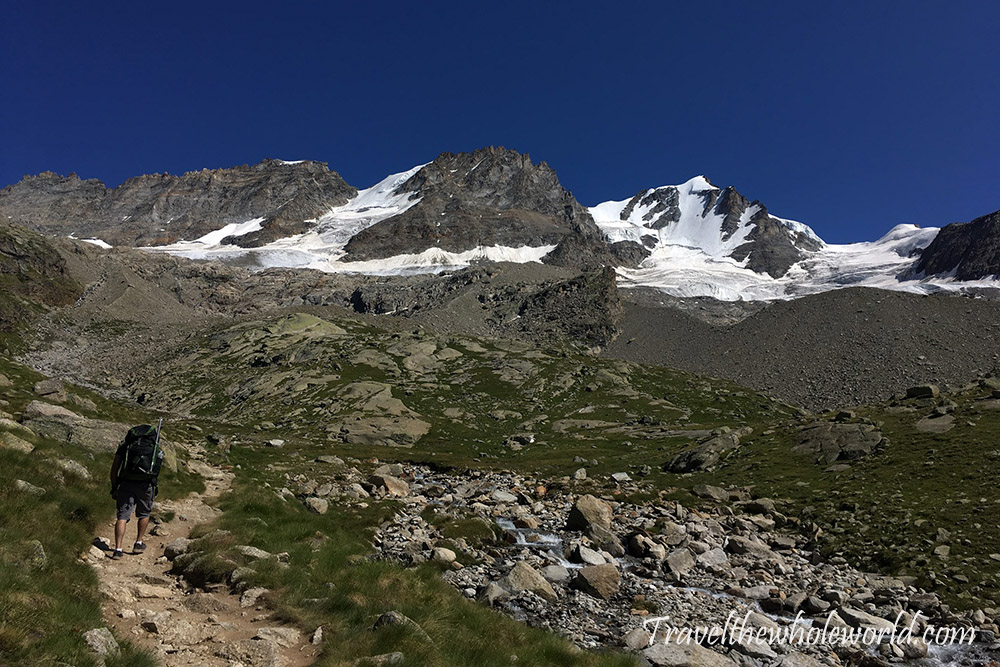 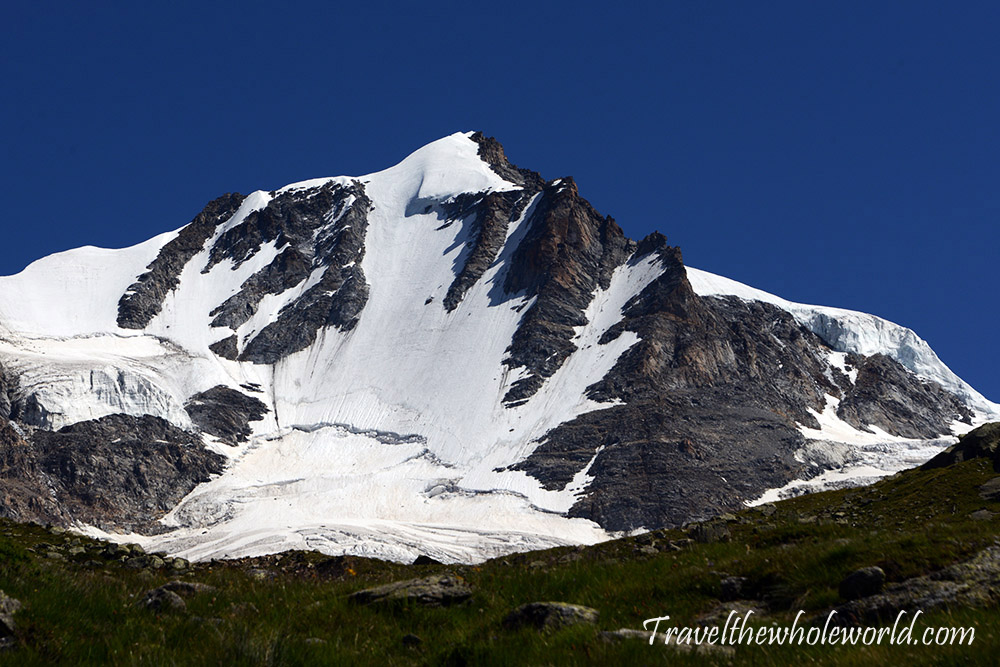 I regretfully didn’t take any photos of the lodge, but it was a reasonable place to stay. The rooms, showers, and WCs were all pretty nice. The food also was excellent and reasonably priced for a mountain hut. Best of all you get excellent views of Gran Paradiso here. While we rested in the lodge it came obvious to me that the mountain was probably a bit more than simple hiking to the summit! 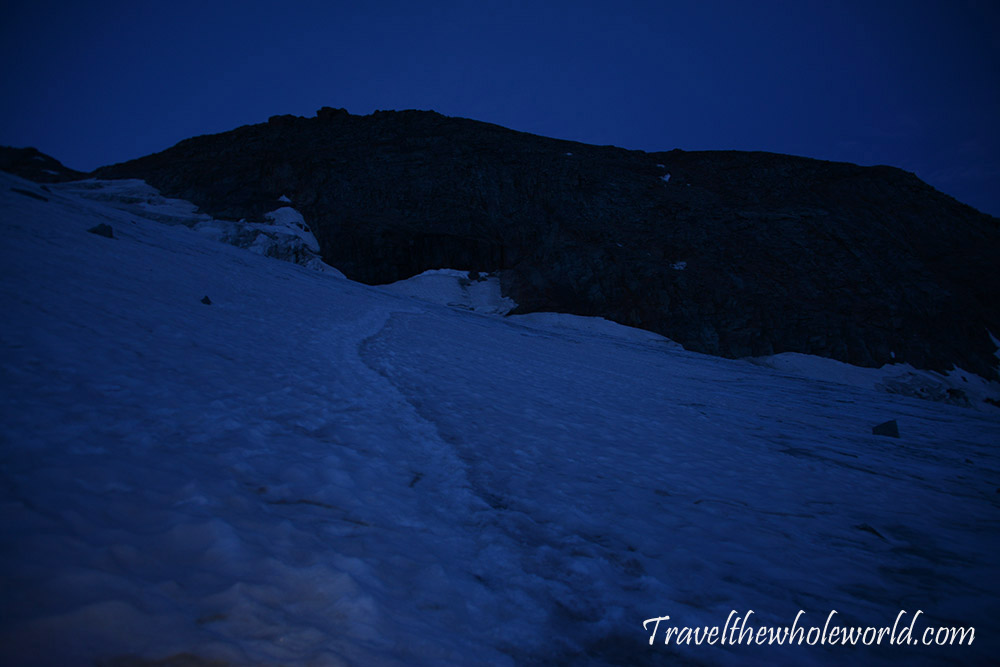 Breakfast is served by the lodge at 4am, so we woke up in darkness, got some calories in us and started for the summit. Initially the trail was the same as the approach the day before, but it didn’t take but 15 minutes for it to get much steeper and have a bit of scree on it. We cross a snow short snow slope and returned to some rocky terrain. In the darkness there was a little bit of route finding to stay on the actual trail, but for the most part it seemed as long as you went the general direction you’d be fine. The early morning meant that lots of the run off had frozen to ice and the ground was a bit slippery. Just below 10,000 feet (3,000 meters), we stopped to put on our crampons as dawn broke. 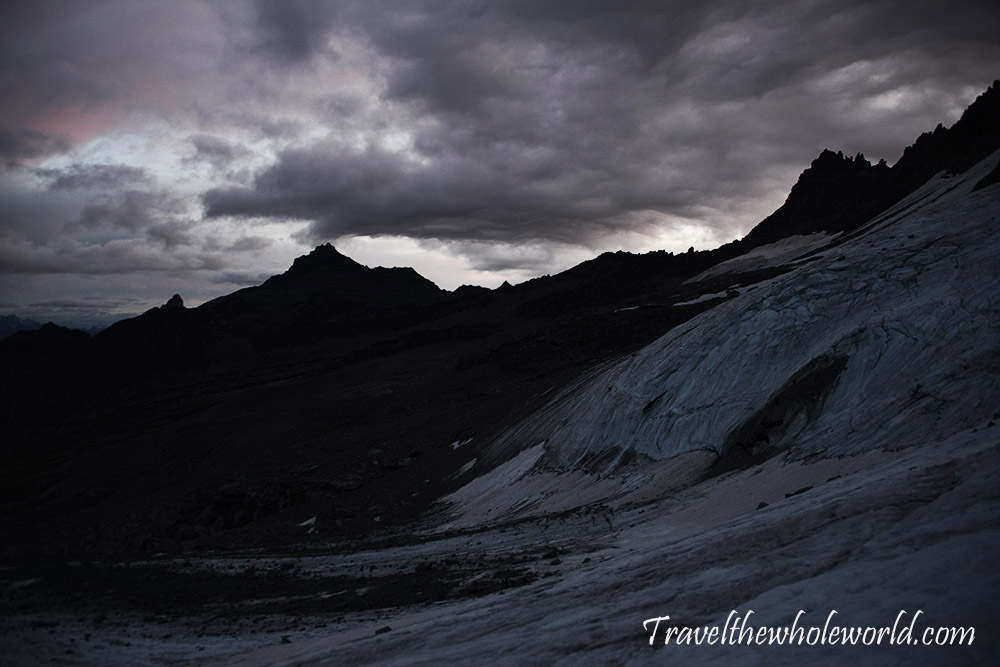 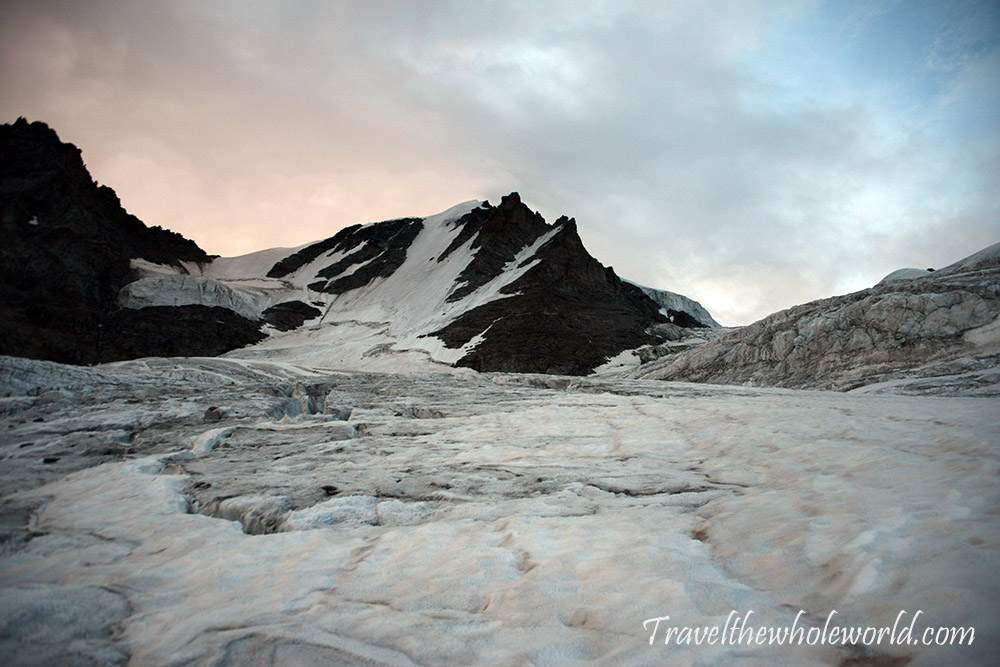 The closer we got to Gran Paradiso the less intimidating it looked. I’d say the mountain is essentially a snow walk up, but the biggest risk is the crevasse field you have to cross. As the sun rose and we could see further out, you could see the treacherous terrain at the base of the mountain. 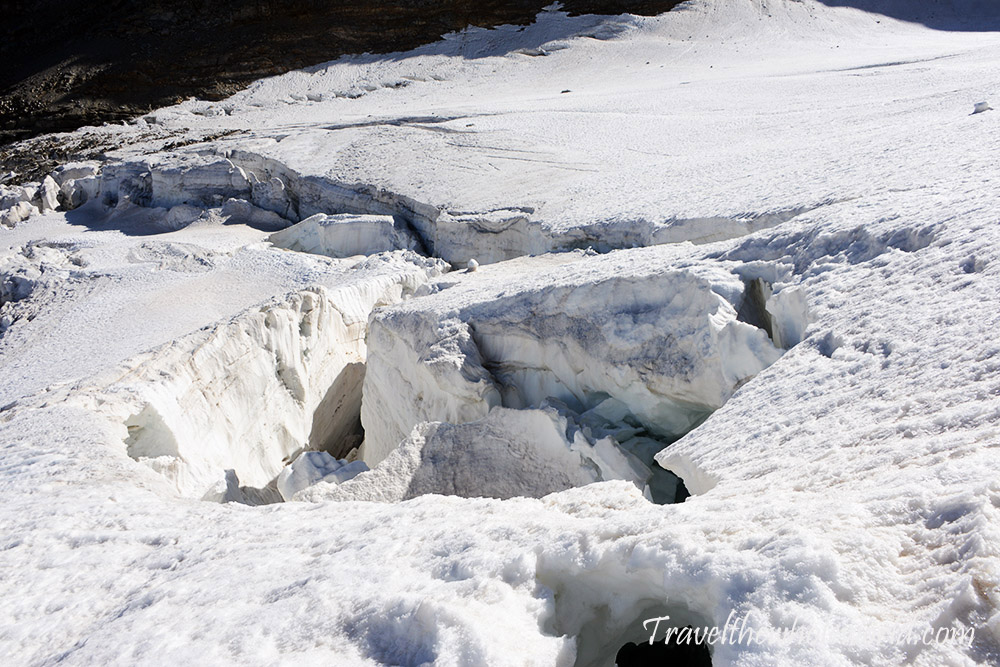 Although the crevasse field is relatively short, there were a couple nasty ones here that I’d not like to fall in. There’s enough people on the route so it’s easy to follow, and for the most part the main crevasses also seemed to be opened up. I think falling in would probably require a mistake on the climber’s part rather than the mountain’s fault. It’s hard to get perspective but this one that I photographed below looked to be almost 30 feet (10 meters) deep! 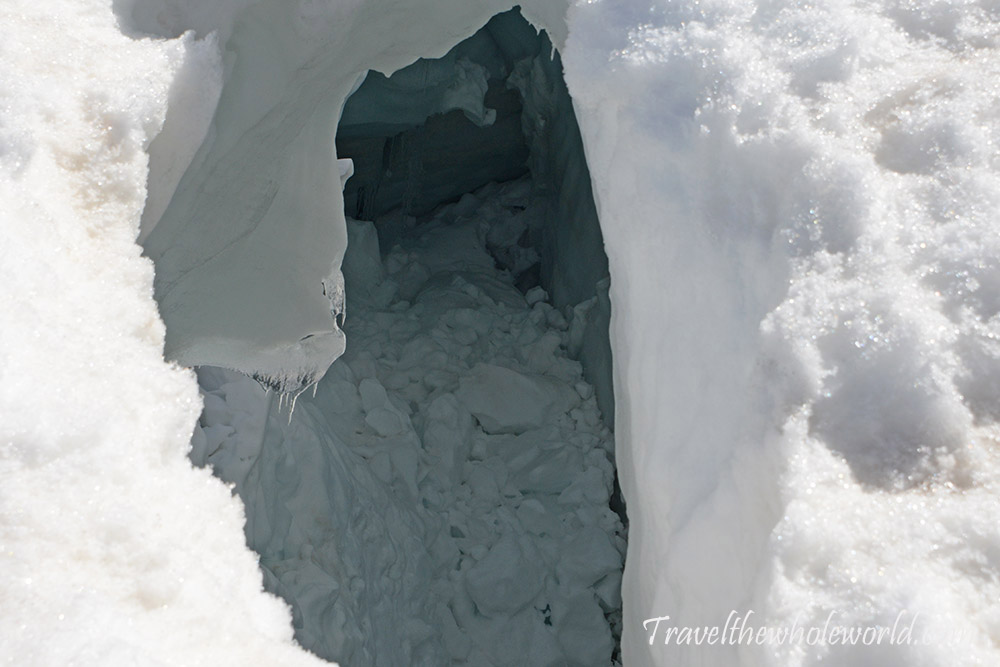 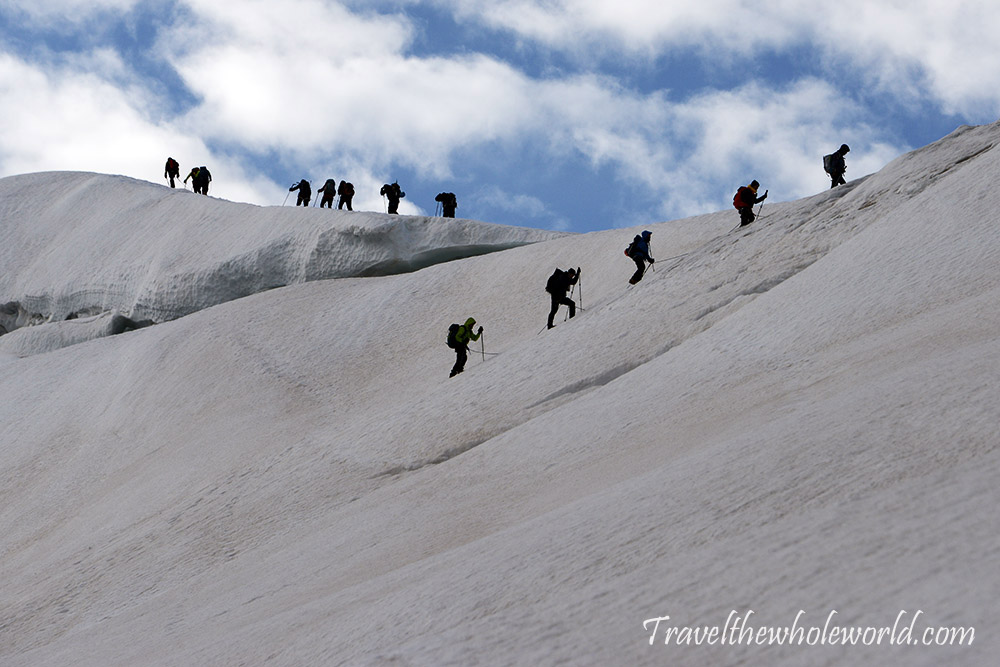 After crossing the crevasse field you’ll ascend a snow slope to a saddle where this route meets the normal route. The snow had melted and refroze overnight making it feel like we were on rock. This part of the ascent was otherwise straight forward and the grade wasn’t steep. As a matter of fact I think I was the only one with an ice ax, and everyone else had trekking poles. 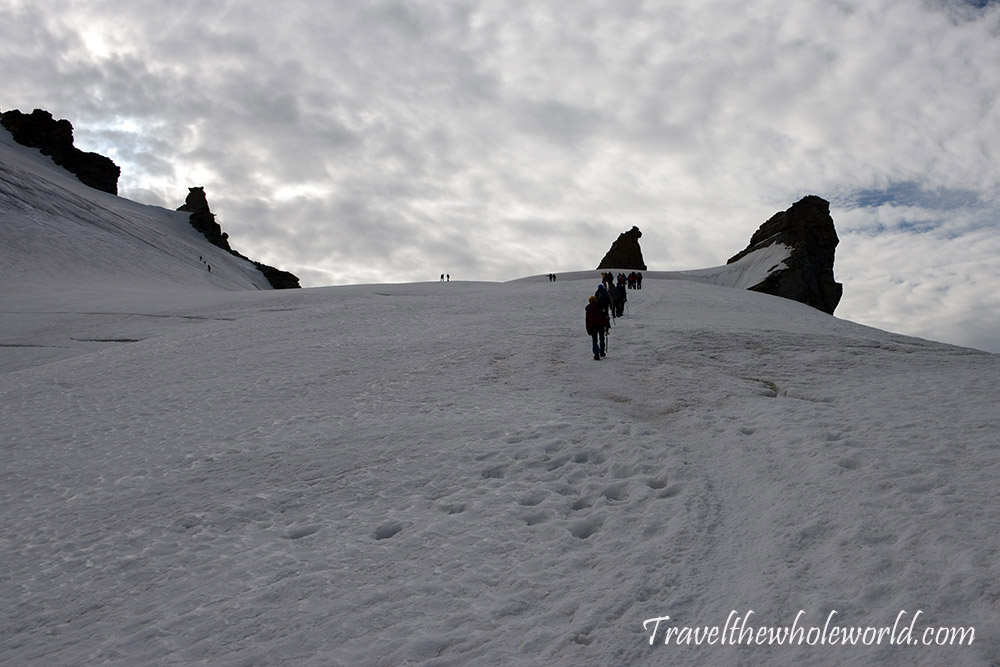 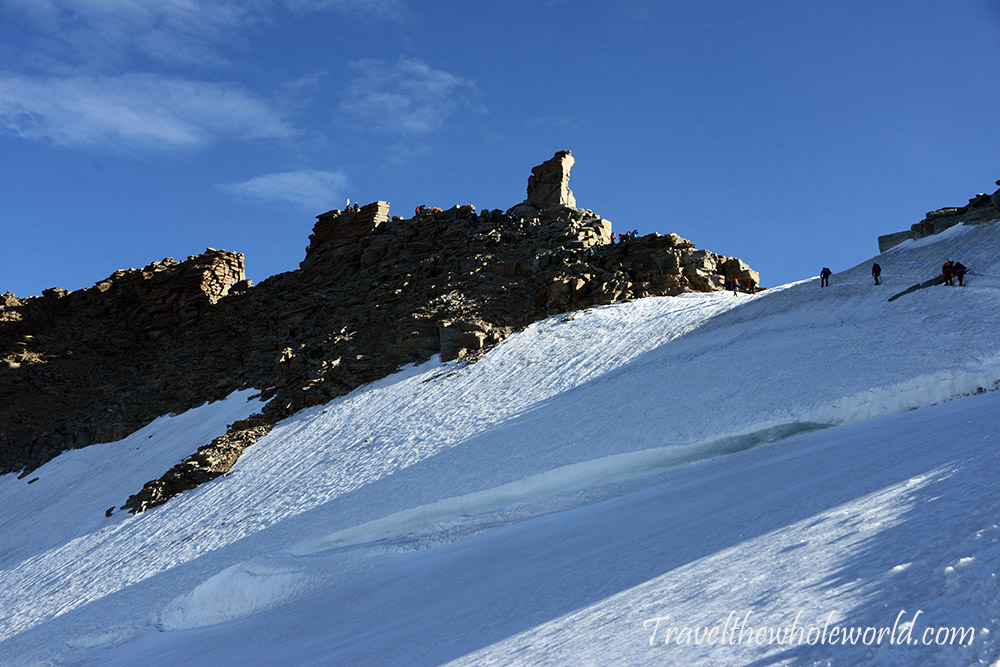 From the saddle, you’ve got a short distance left to the top of Gran Paradiso. There is another snow climb followed by the rocky summit block. I had thought the summit block was a long rocky ridge, but it’s actually short and only takes a few minutes. Later I found out some people had described it as a difficult exposed scramble, but in all honesty I didn’t think there was much to it. The photo below was taken while I was on the summit block, but the area in front of me is not the summit and is just a bit lower. 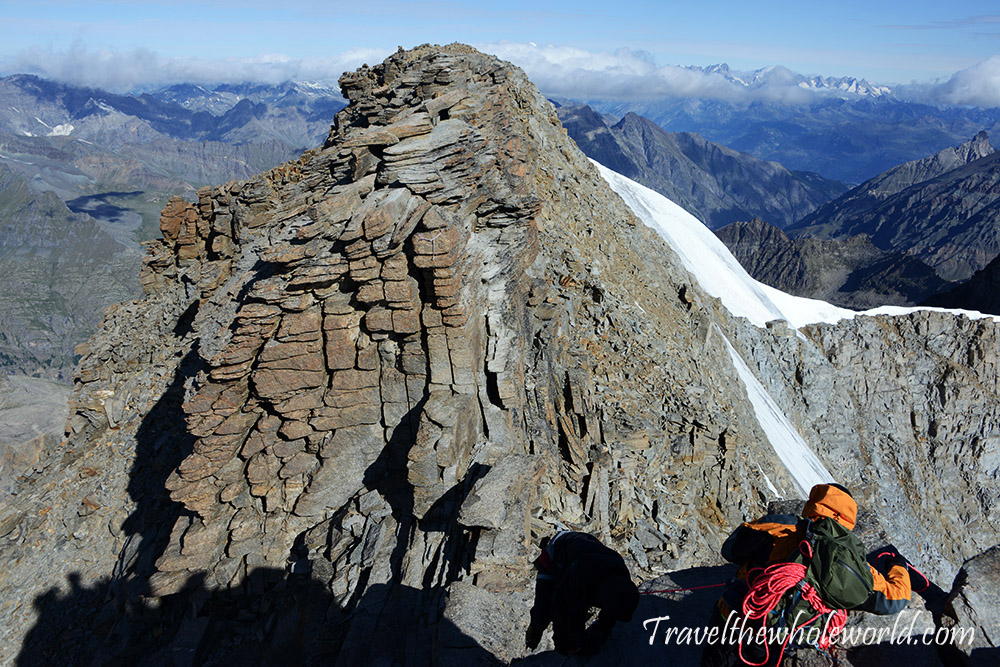 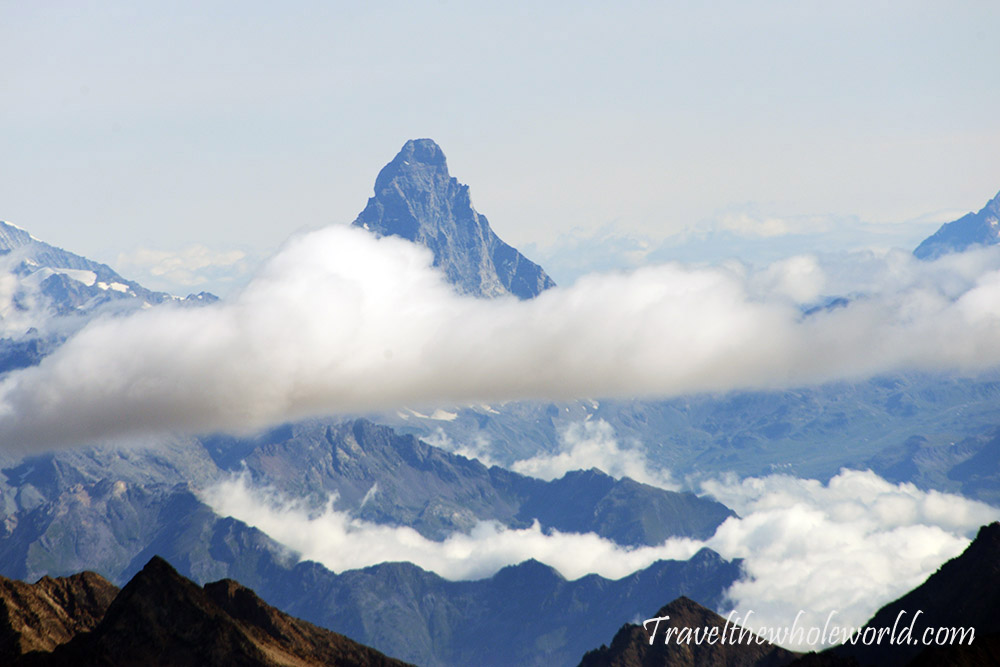 Our acclimatization had been in order to climb the Matterhorn, which I unexpectedly could see from the top of Gran Paradiso! The mountain known as Cervino in Italy has long been on my list. Unfortunately this time we didn’t get a chance to attempt it, so I will most definitely have to return again. 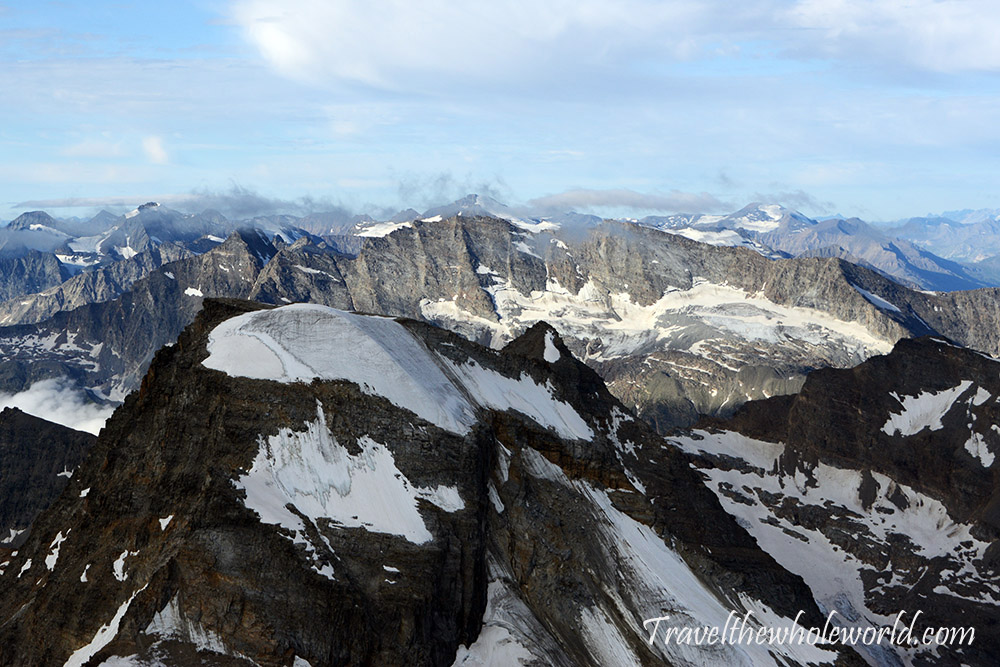 It took us less than five hours to reach the summit of Gran Paradiso which stands at 13,323 feet or 4,0601 meters. My friend had just come from sea level two days before so had to be much more cautious in ascending than I did, otherwise we easily could have done it in less than four hours. Despite being only a half day climb, Gran Paradiso ended up being a wonderful surprise. There was a nice mix of challenges and the views from the summit were most rewarding. The surrounding alps and even Gran Paradiso’s own summit towers were really impressive. Next time we’ve spoken of trying Monte Rosa, the Matterhorn, and Mt. Blanc. 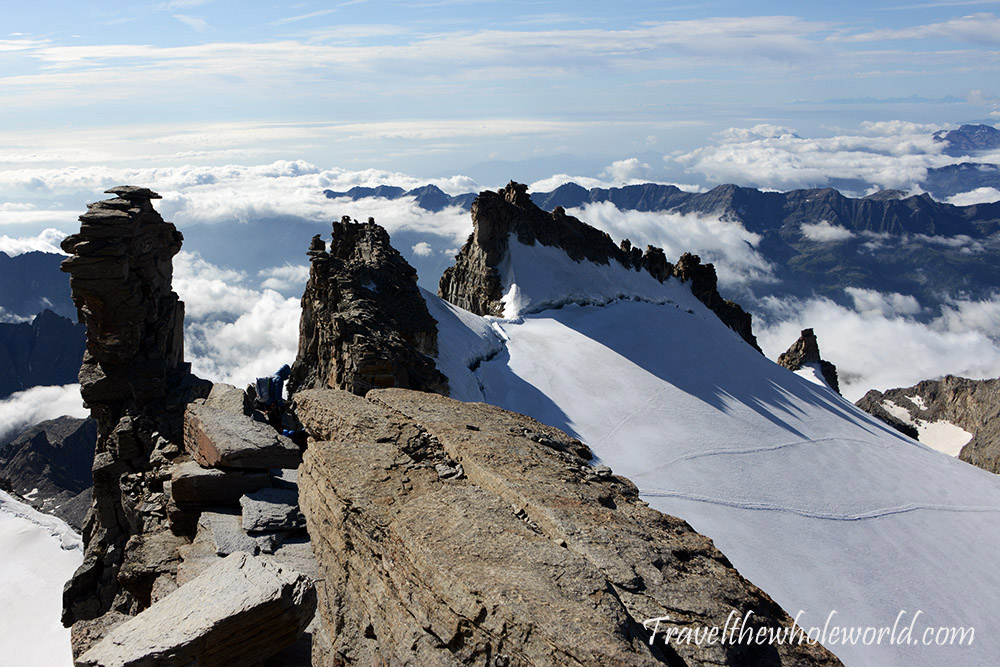