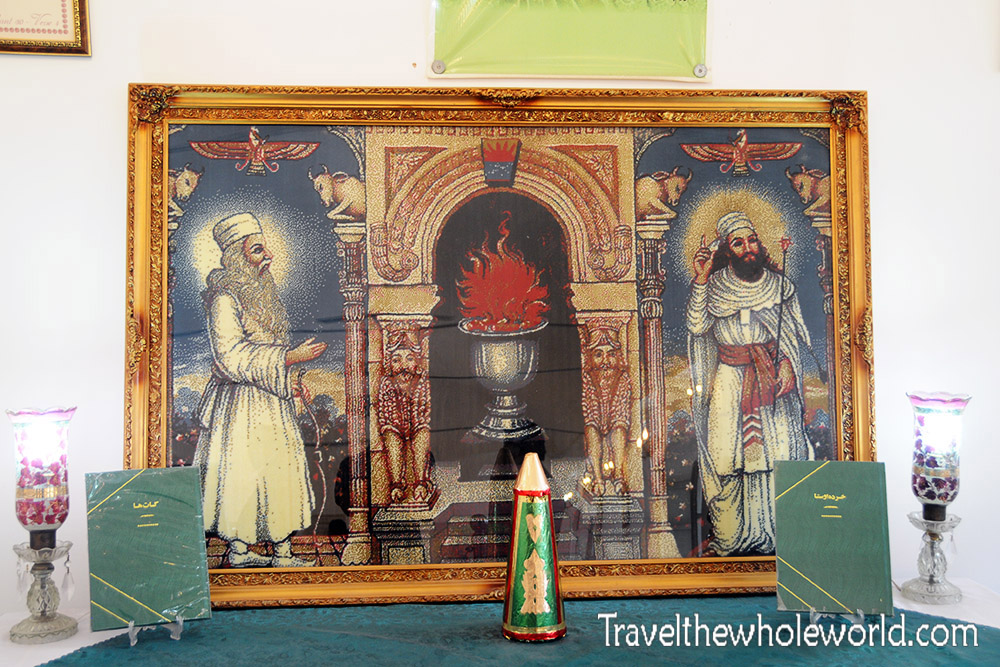 It’s hard to call any single city the cultural capital of Iran, but I think it’d be fair to call Yazd the capital of Persian culture. Millenniums ago and long before Islam, ancient Persia practiced the religion of Zoroastrianism. It is widely believed to be the first major monotheist religion the world has ever seen, and some say it later influenced Judaism, Christianity and Islam. Today Iran is over 90% Shiite, but a small population of Zoroastrians still exist, especially within the ancient city of Yazd. Above is a photo that shows a painting of some early Zoroastrians. Below is a photo of a portrait that shows the founder of the religion. 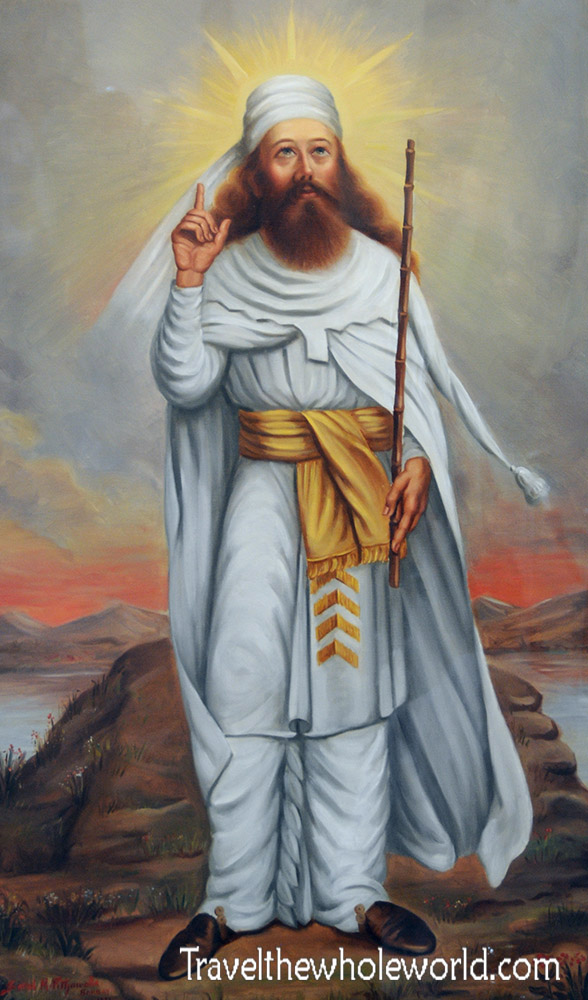 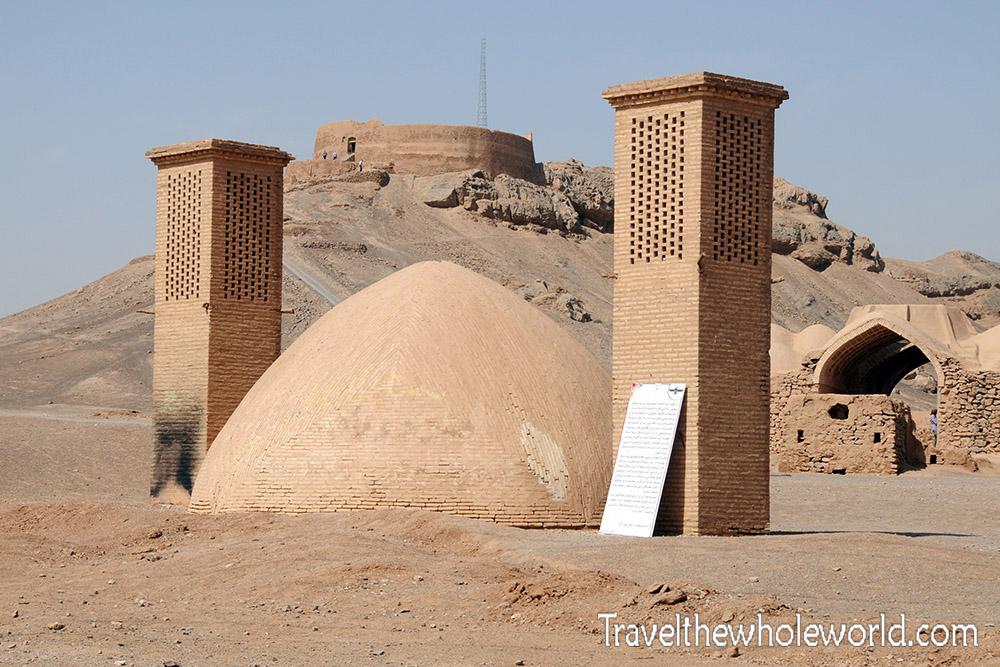 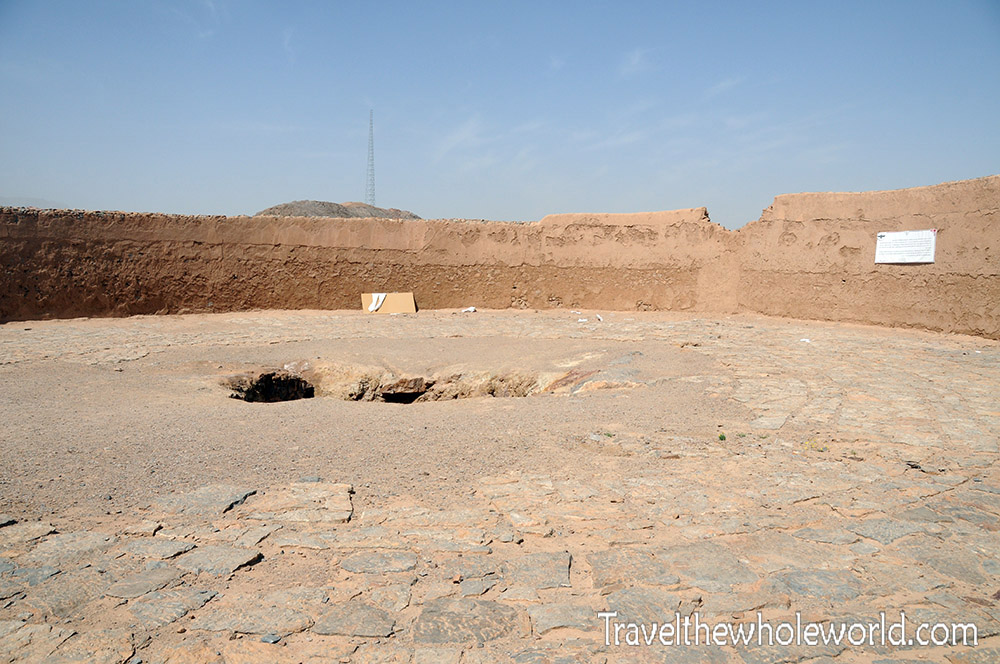 Zoroastrians are also known for their unique ceremonies for their dead. They had great respect for nature and the four elements of earth, air, water, and fire. They believed that burning a body would pollute fire and air, and that burying a body in the sea or land would pollute the ground and rivers. Large temples were built on top of mountains where dead bodies were placed and allowed to be eaten by vultures. Only the bones would remain which would then be placed into a special acid bath to completely dissolve the remains. On the left is a large water reservoir where dead bodies were washed before being placed on the the temple rooftops. You can see one of the temples in the background on the left photo. On the right is a photo on the rooftop. The hole in the center is where the acid bath was once located. This ceremony was banned by the Iranian government in the mid 20th century citing health reasons. 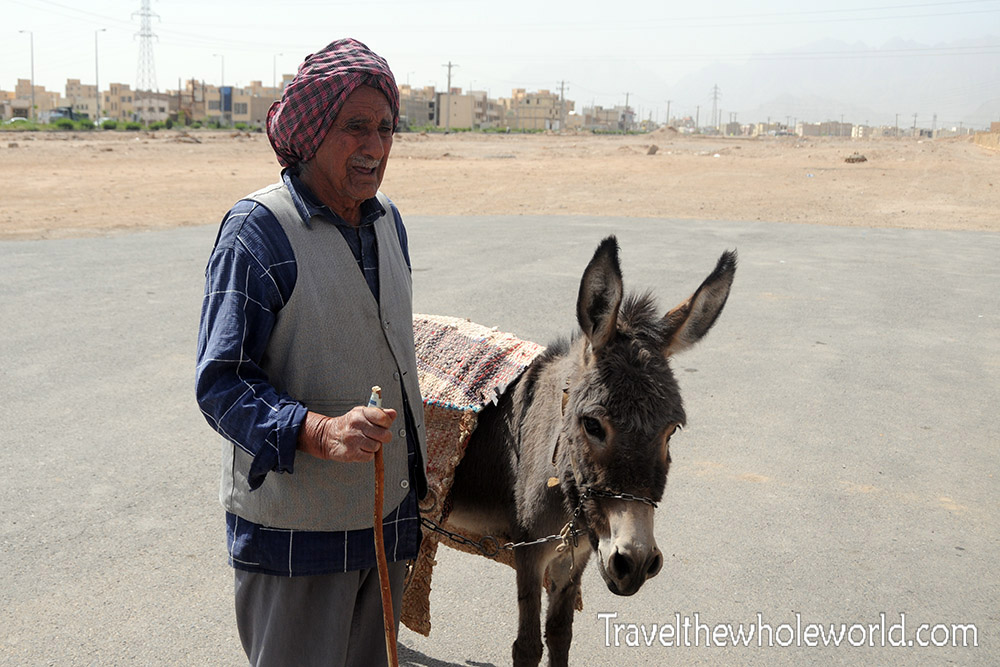 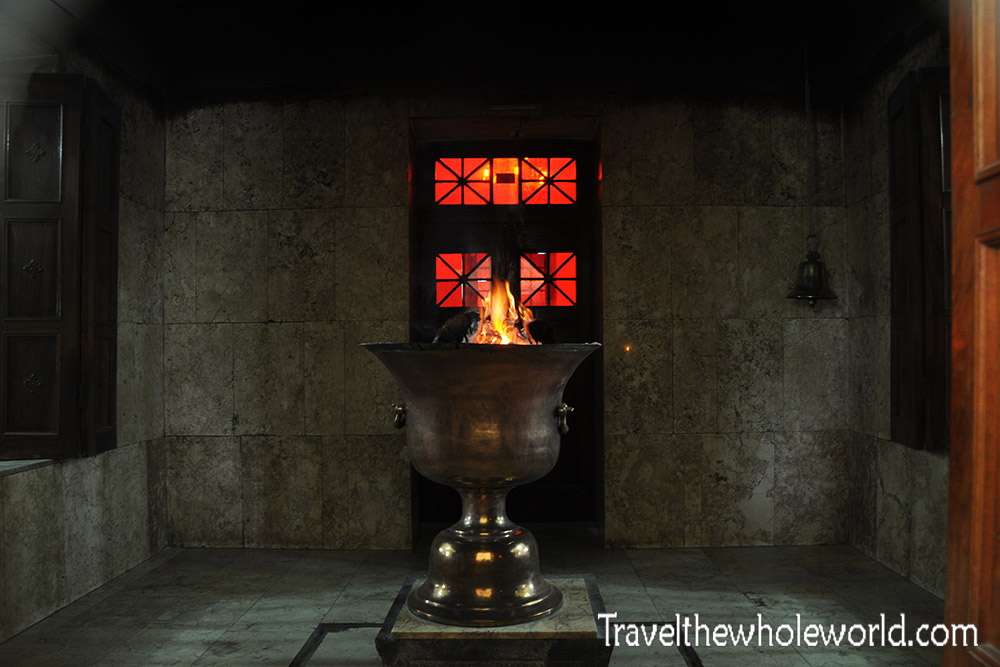 Zoroastrians went from being a large majority of Iranians to just a tiny percent that exist today. On the left is one of the last Zoroastrians still practicing in Iran. The photo on the right is from the Fire Temple, the eternal flame has been burning for thousands of years. I visited a Zoroastrian temple in Azerbaijan that also had an eternal flame fueled by a natural gas leak. The eternal flame here is actually even more impressive since it is wood burning and required non stop attention over the past millenniums! 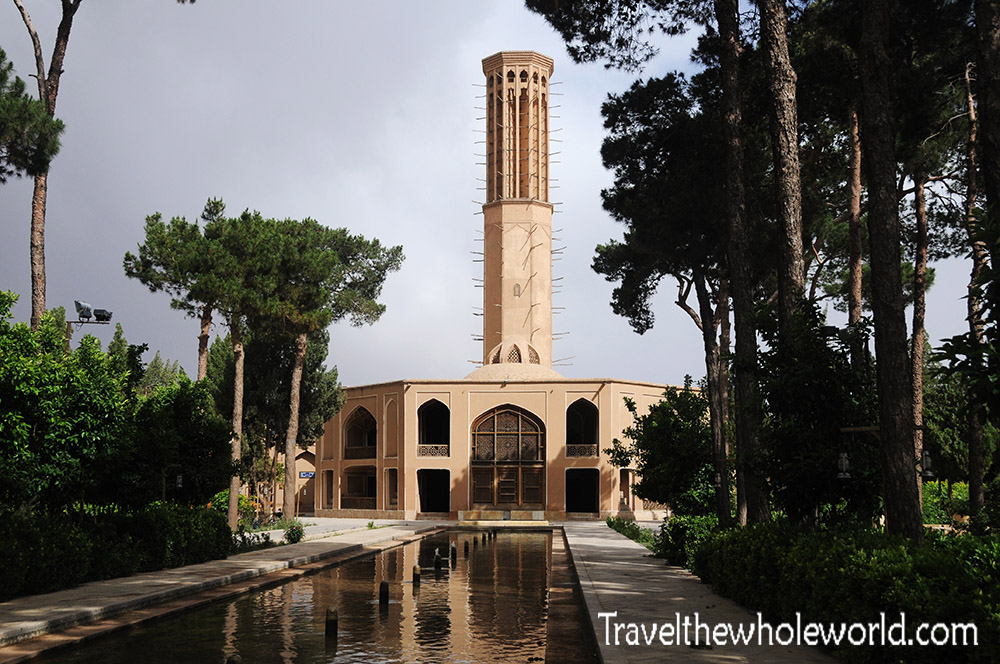 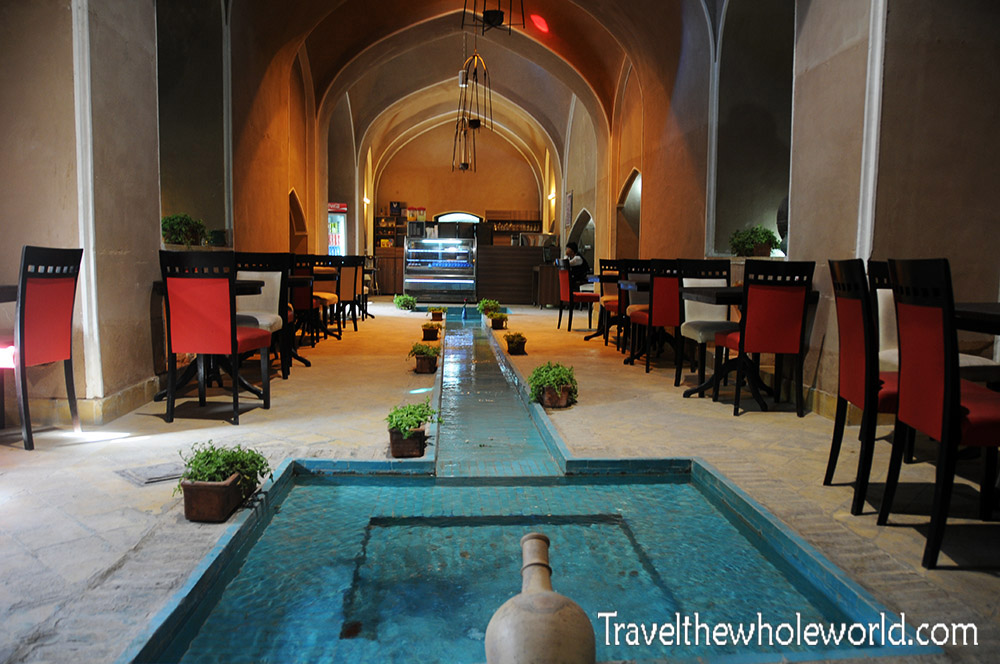 I had gone to so many gardens in Iran that to be honest I almost wanted to skip this one I went to in Yazd. I was very glad I didn’t, since it was home to a beautiful building that is cooled by the world’s largest wind tower! I had already come across a few wind towers in various parts of Iran, but nothing compared to the size of this one. The concept is to construct a large ventilated tower that forces wind downward bringing a nice breeze during the warmest months. Of course the garden here also had another great coffee shop! 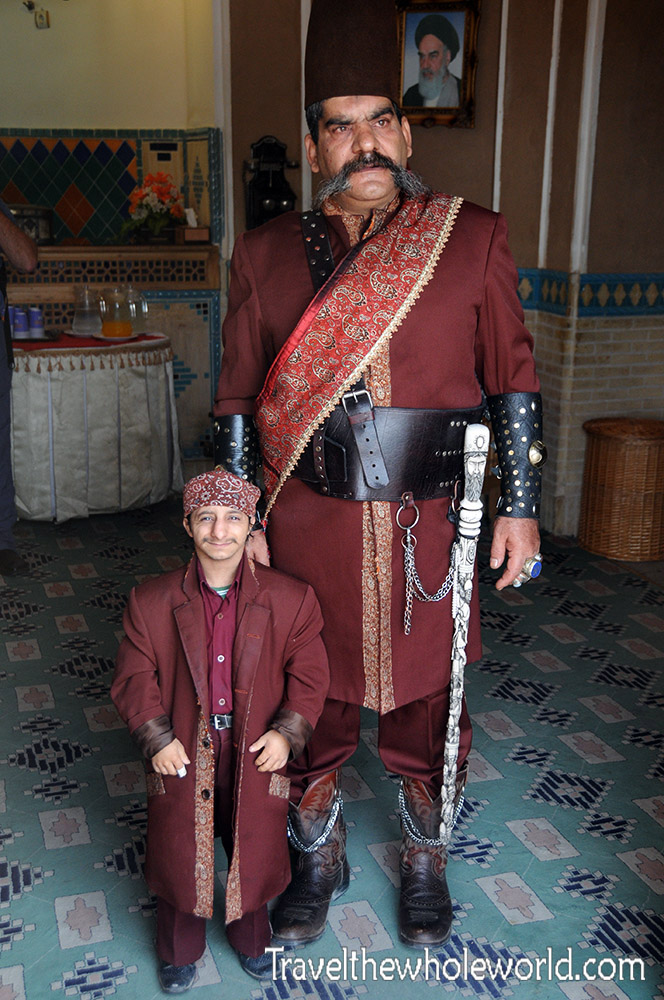 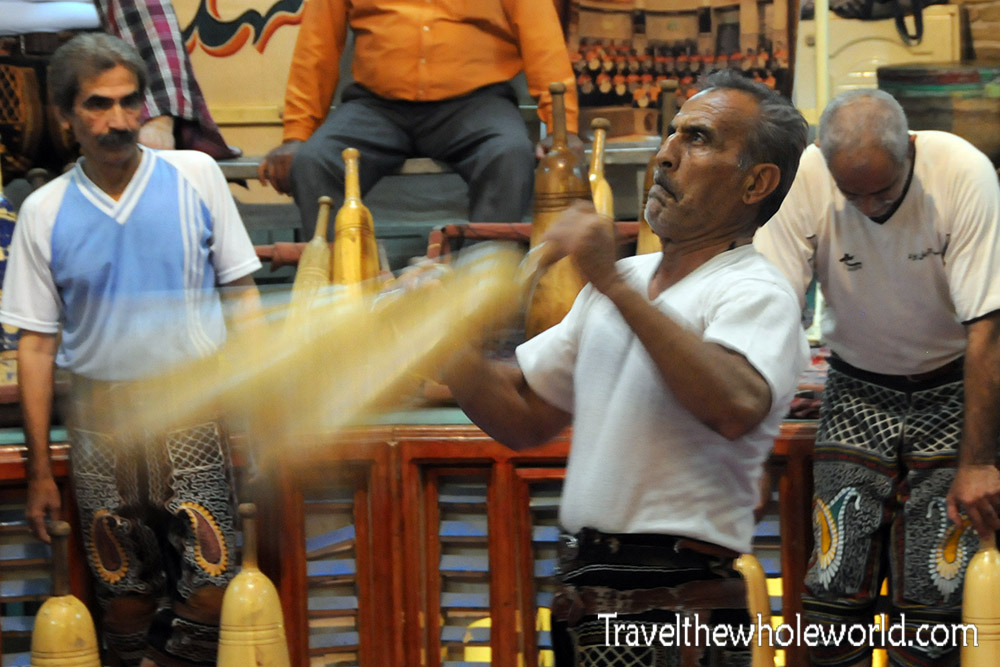 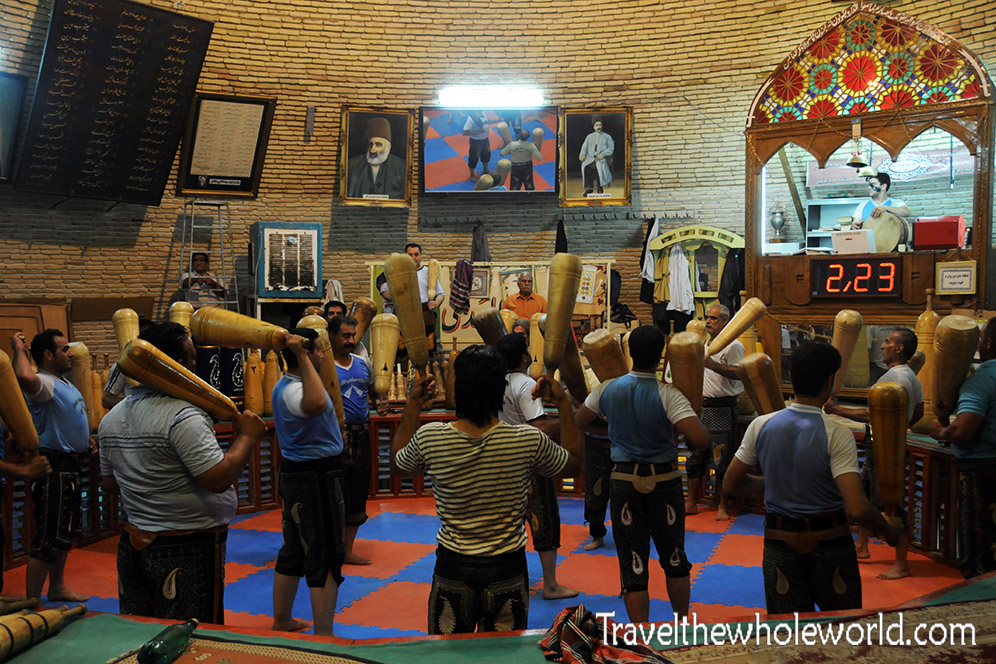 Yazd without any question, had the most traditional atmosphere than any other city I visited while in Iran. Of course each city has something special to offer, but I felt in Yazd I got the best understanding of what it might have been like in Persia hundreds or even thousands of years ago. On the left are two locals wearing traditional Persian attire. As Persia was invaded by many other empires as well as doing its own invading, the troops kept in shape by training with heavy weights that resembled over-sized clubs, metal arches, and other tools. In Yazd there is sort of an open gym that people attend each night to train just like their ancestors did. This isn’t a show put on for people, but rather an open house where anyone is free to come participate or watch if they’d like. For about an hour a small group of people from all ages and levels of fitness participated doing a variety of traditional exercises. Something I see in every country regardless of religion or race, is kids being kids. These guys below were getting their work out from soccer and seemed to be having a passionate soccer match. 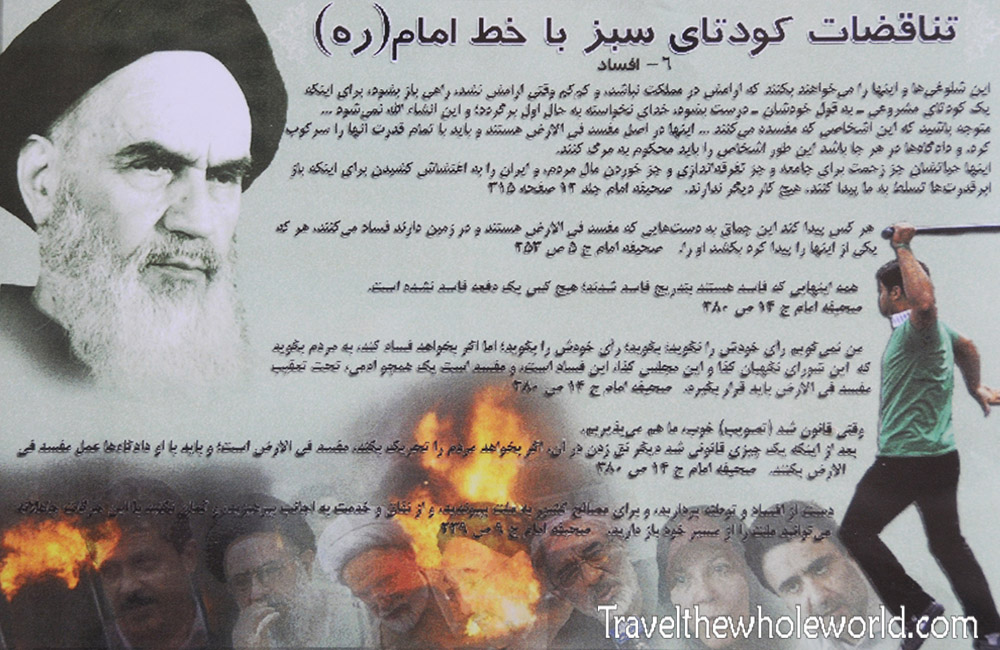 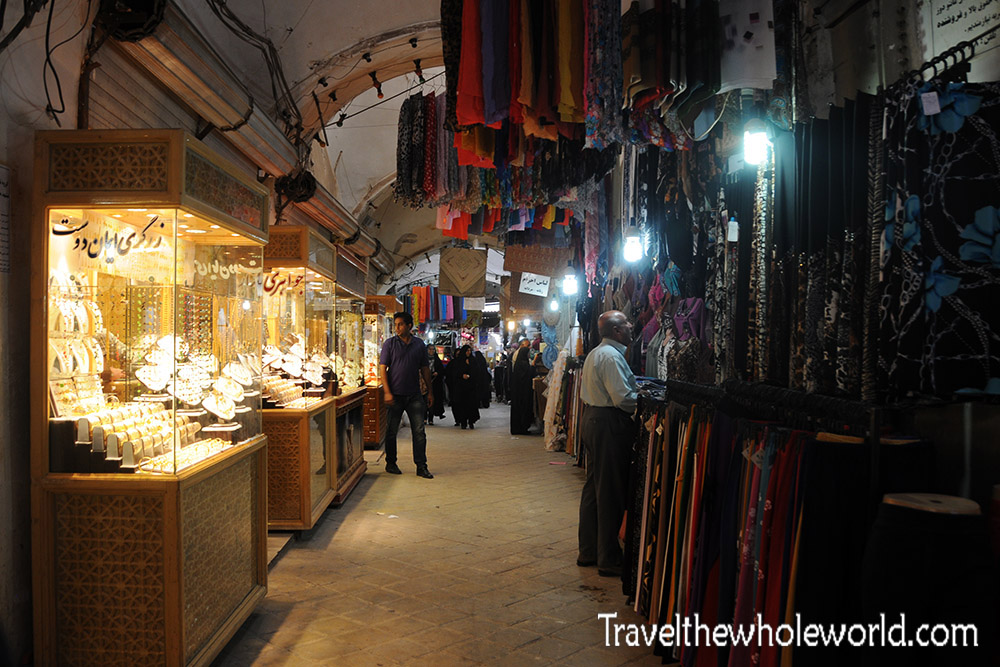 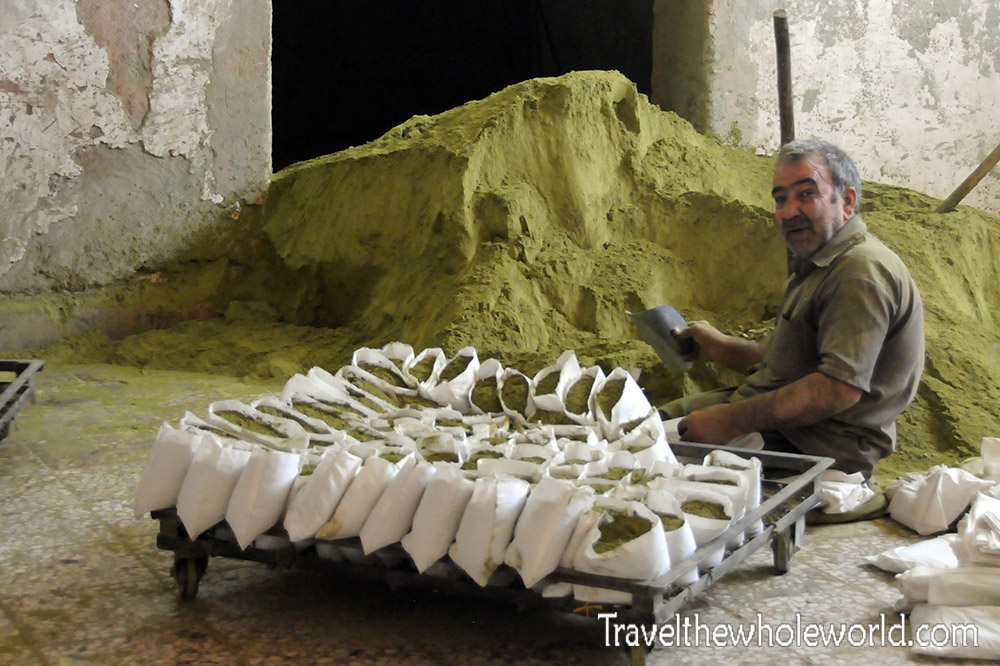 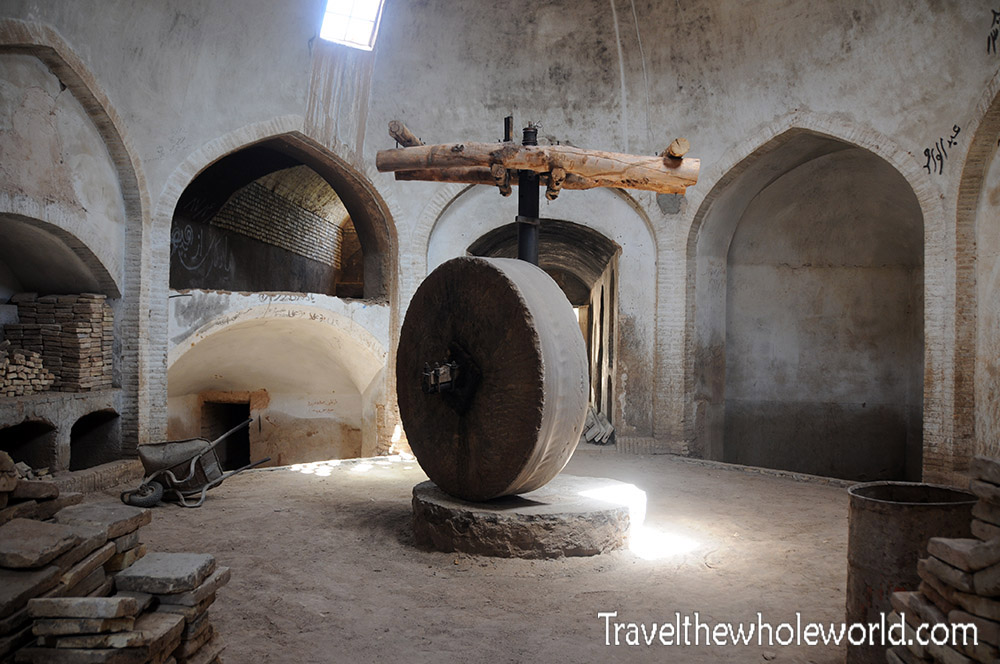 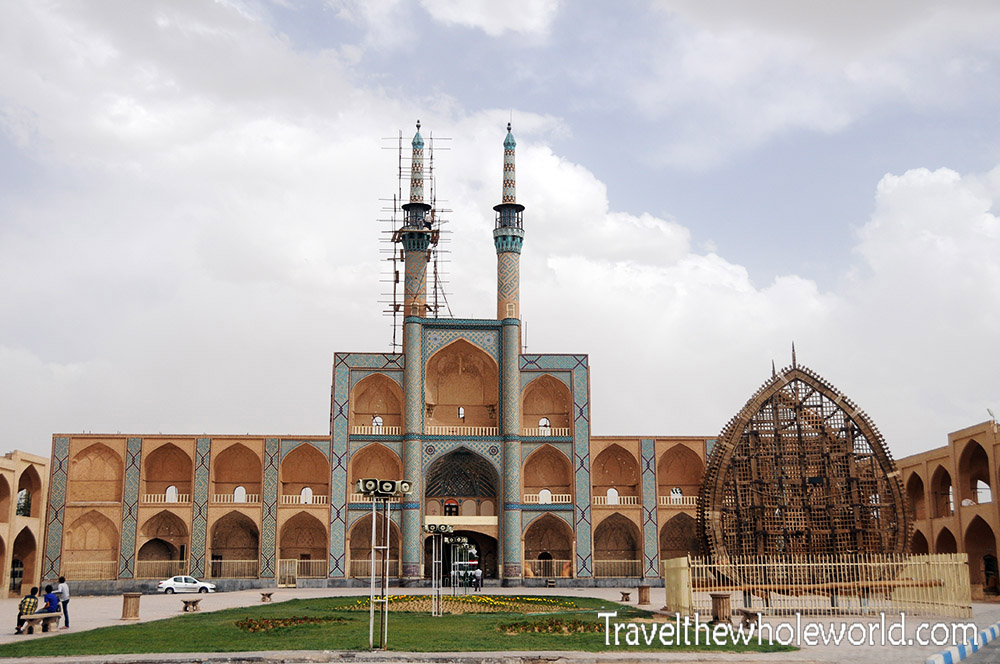 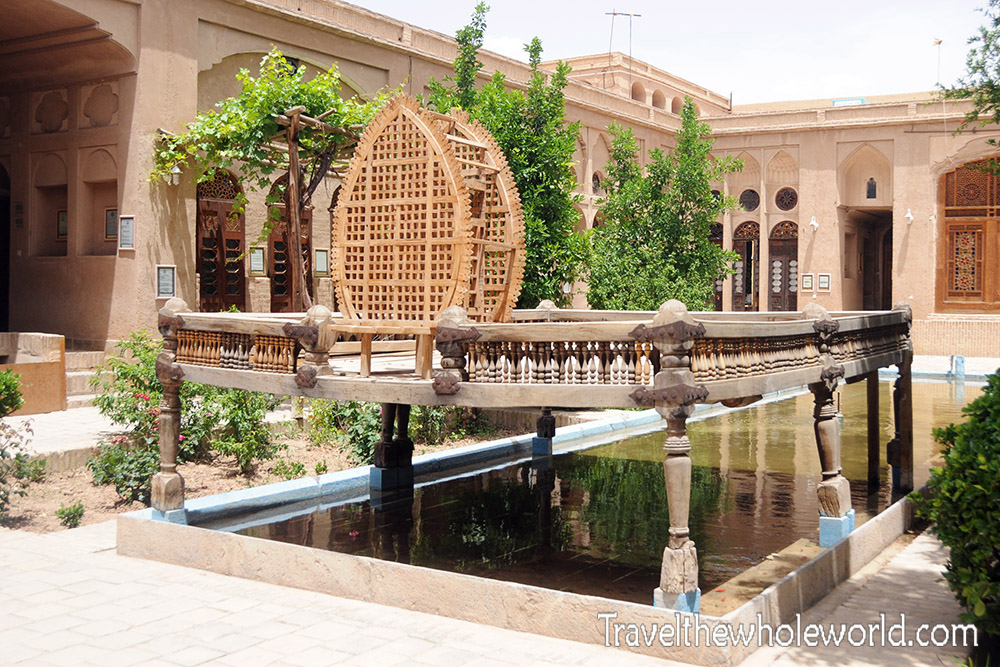 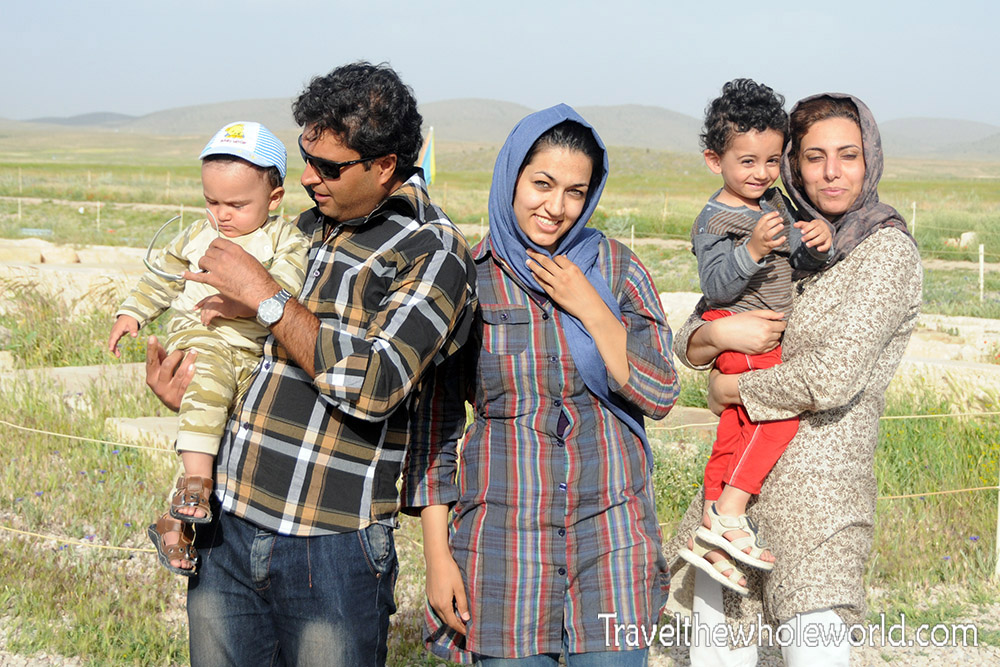