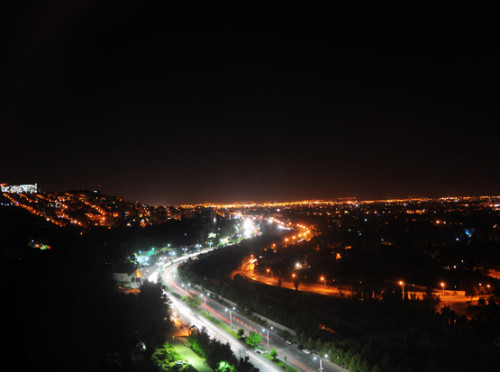 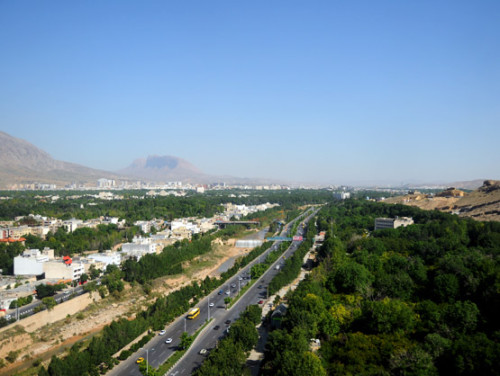 After visiting Tehran, I took a flight to the city of Shiraz located in the southern parts of the country. I expected the city to be much hotter than Tehran, but it wasn’t much different. Since I visited in May, I’m sure that would change in the middle of the summer! Above are two photos of Shiraz that I took from my hotel; a day and night shot. Shiraz is famous in Iran for its people who are said to have a lazy lifestyle and a love of poetry. 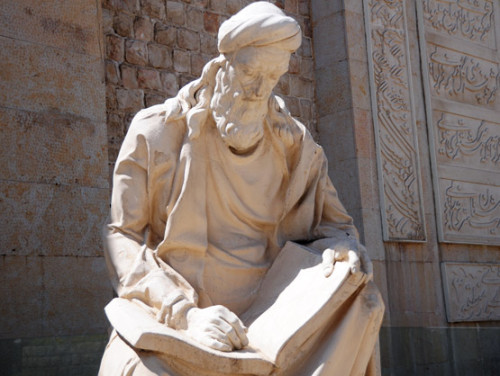 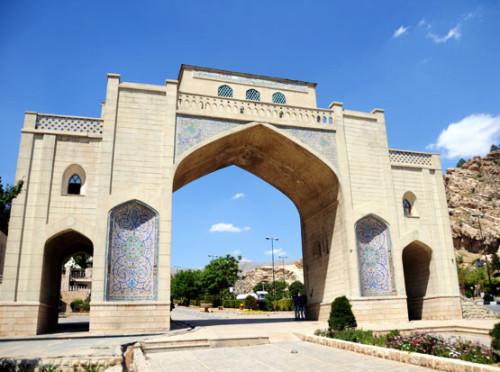 On the left is a statue of the famous 13th century poet by the name of Hafez. 800 years later, his poetry remains very popular in Iran with many locals displaying some of his most famous work in their homes and memorizing them by heart. The statue of Hafez is located right next to the Quran gate seen on the right. This is the entrance to the city and the gate has been here since the 1500’s. Long ago when people did dangerous journeys between cities through the scorching desert, many believed in saying a prayer and holding the Quran over your head for good luck.

As I mentioned citizens of Shiraz have a reputation in the country for being lazy. Instead of doing the prayers and holding the Quran over your head every time you leave the city, someone hundreds of years ago figured it would be much easier to put a Quran in the city’s gate. This way all traveler’s going underneath the gate on their way out of Shiraz would automatically be blessed before their journey. Because of this, the gate is famously known as the Quran Gate. 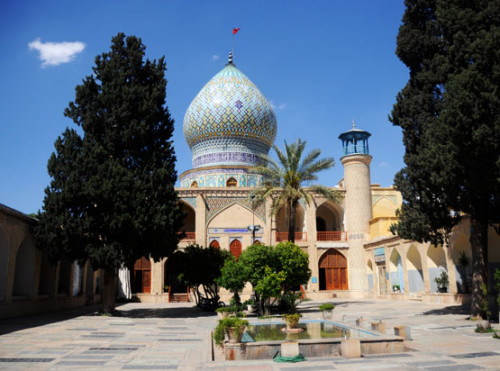 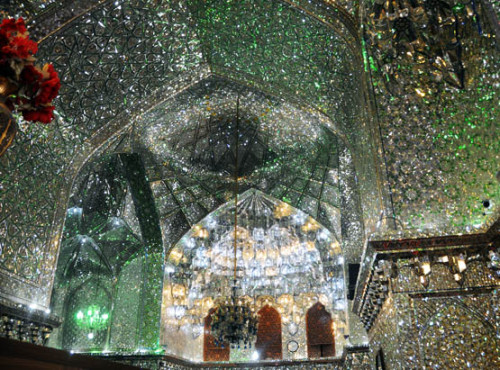 A popular place to visit in Shiraz is the Shah Cheragh Mosque. The mosque is known for containing the tomb of two famous brothers who were fleeing persecution of Shiites back in the 14th century. I didn’t take a photo of the tomb itself, but it is nearly identical to ones I have seen in Herat, Afghanistan that I have photographed. Many of the palaces in Tehran did not allow photography once inside. This was a shame to me because the interior decorations were amazing. Fortunately the Shah Cheragh Mosque allowed photography and had the same style decorations, so you can get an idea of how some of the palaces in Tehran were decorated. Inside the mosque I talked with some people about Islam and their own personal beliefs. I still found it amazing how many Iranians were so open and not only willing to speak to foreigners but would actually go out of their way to try. 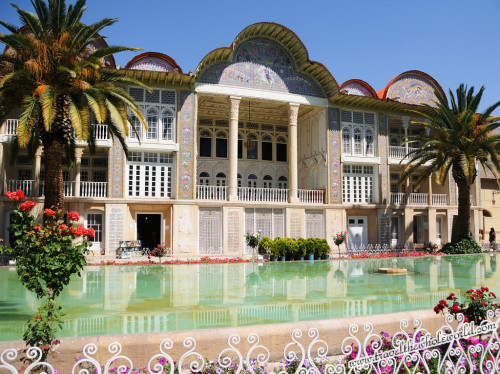 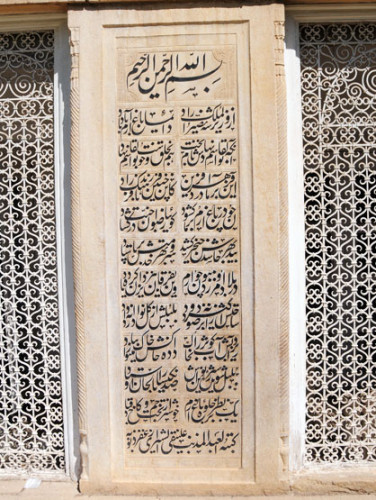 Within Shiraz is Eram Gardens, probably the most beautiful gardens in all Iran. This historic garden comes from the Arabic word Iram which translates as heaven. The gardens were created in the 19th century and show Persian’s love of flowers and reflection pools. They have certainly mastered creating an oasis of flowers and green in an otherwise mostly dry country. On the left is the Qavam House, with the slabs below the palace columns filled with poetry from Hafez. Below are two photos I also took from within the gardens.
Like the photo on the Qavam House? It’s for sale here! 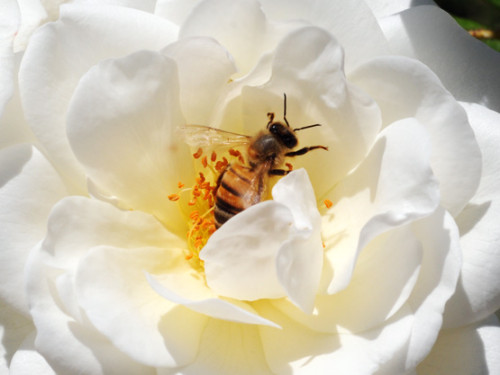 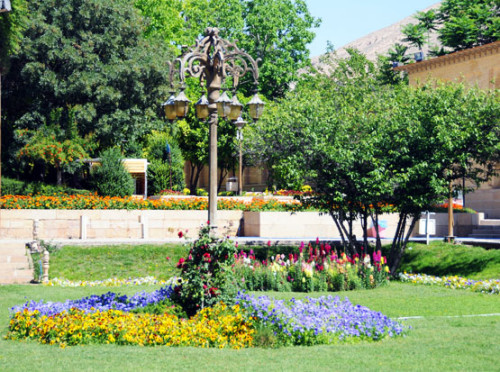 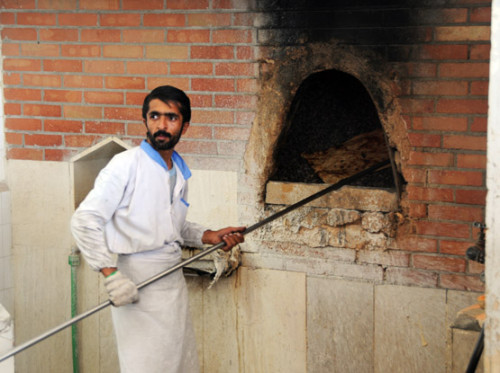 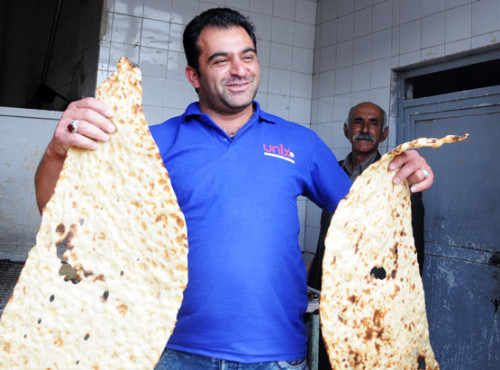 In Iran, like most other countries in the greater middle east, bread is usually served with meals. In Shiraz I was able to try some bread right out of the oven. The guys working here were more than happy to have their photos taken and show how they bake their bread in a traditional oven. 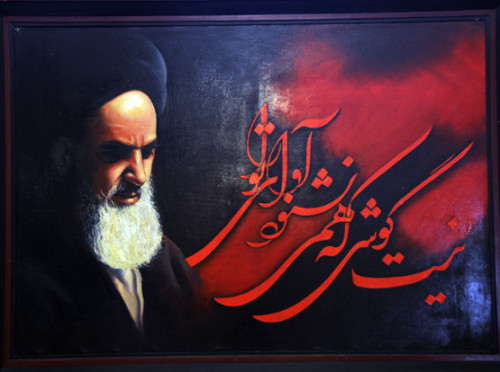 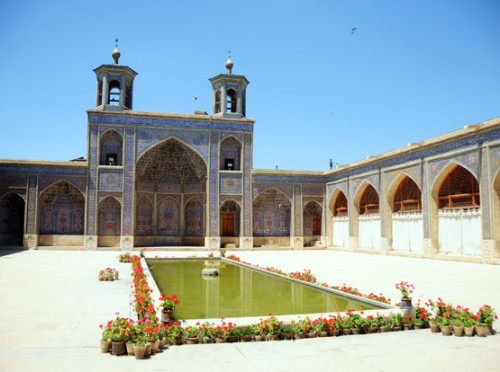 The Nasir Al Mulk mosque in Shiraz has some of the most beautiful interior decorations I have seen. Inside the mosque was a portrait that I photographed of the leader of the Islamic Revolution, Ayatollah Khomeni. The calligraphy by his name says something to the effect that no corner or space remains hidden from me and I see everything. On the right is the courtyard of the mosque itself. 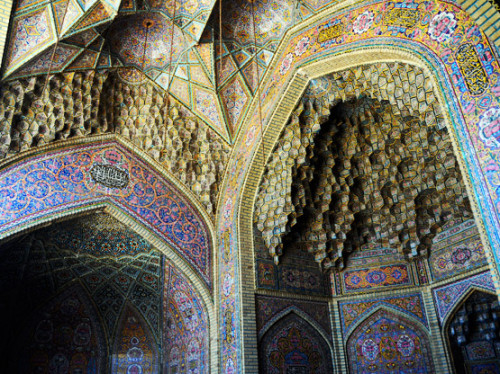 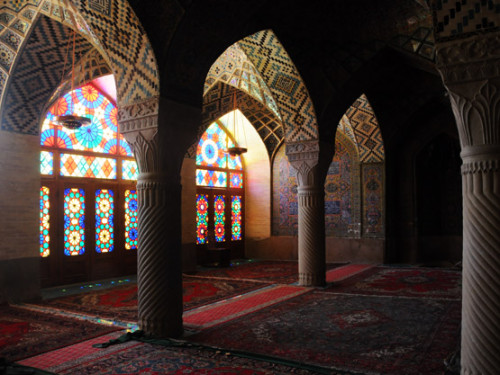 The interior architecture of the mosque was absolutely amazing. Instead of smooth rounded corners the ceiling were made of hundreds of cornered edges and arches, each carefully decorated with verses from the Quran or flowers. On the right is the prayer area of the Nasir Al Muk Mosque. It was here that I learned a major difference between how Shiites and Sunnis pray. Shiites relate the earth to clay, and believe your body will one day return to earth when you pass away. When Shiites pray they often use a small circular clay tablet that they place on the floor and touch their head to it. Sunnis however disagree with this practice, and Shiites traveling to Mecca would be criticized for doing this. 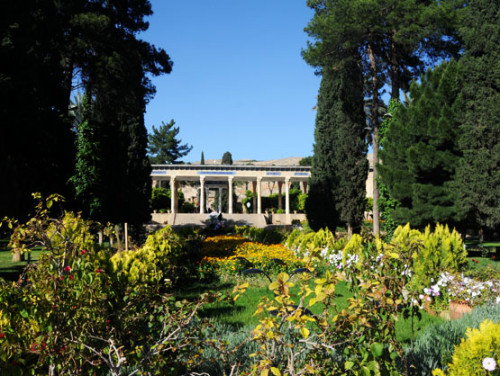 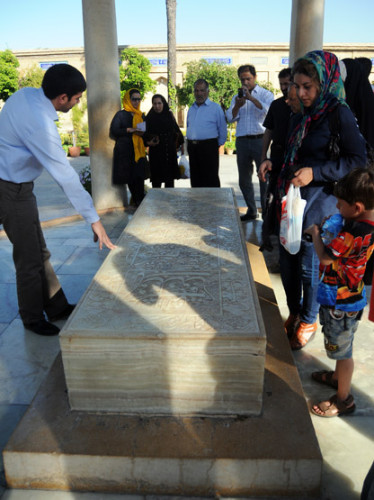 Within Shiraz is a beautiful garden that is home to the tomb of Muhammad Hafez himself. Hafez lived for about 65 years until he passed away about 600 years ago in 1390. Above are the gardens and people visiting the Hafez’s sarcophagus. 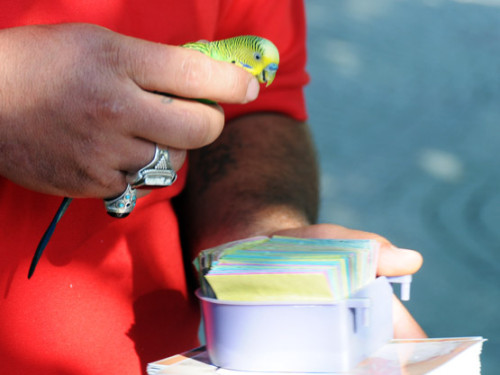 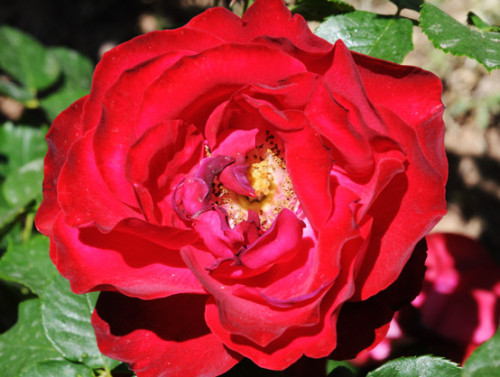 Shiraz is definitely all about gardens, roses and poetry. I should mention that along the streets there are people who sell fortune cards written in Persian poetry which is followed by a more formal explanation at the bottom. I was told that some of them aren’t always positive and can be brutally harsh! I decided to try one and left my fate up to the parakeet who picked the card for me. The poem was quite long but basically suggested I was at some major crossroads in my life and to focus on myself rather than worry about external things. I suppose that could be true since I had just quit my job of 8 years two weeks prior to going to Shiraz and had a lot of life changes coming up!