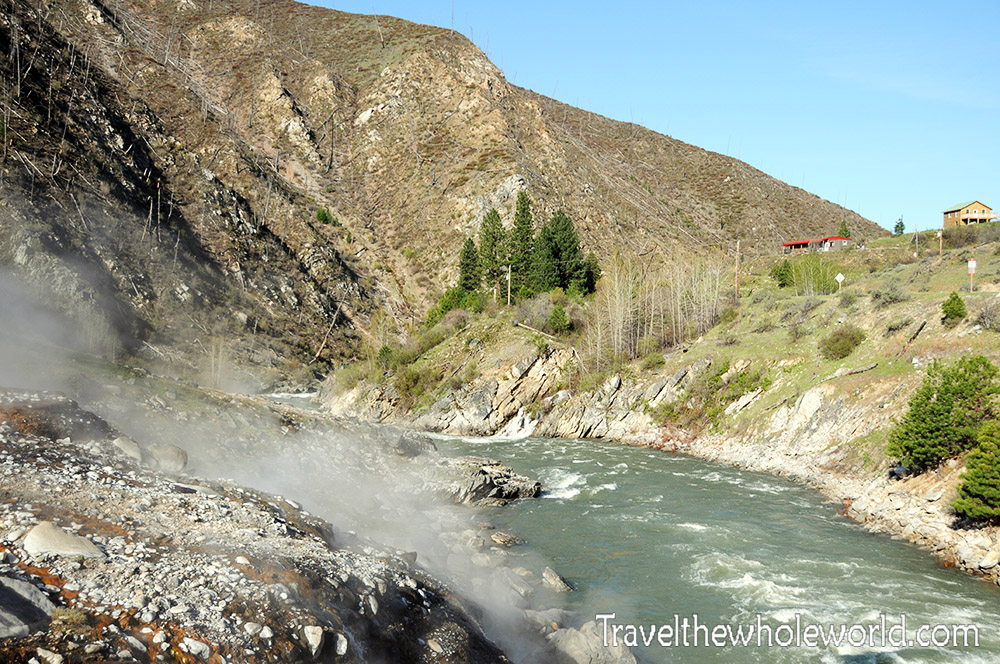 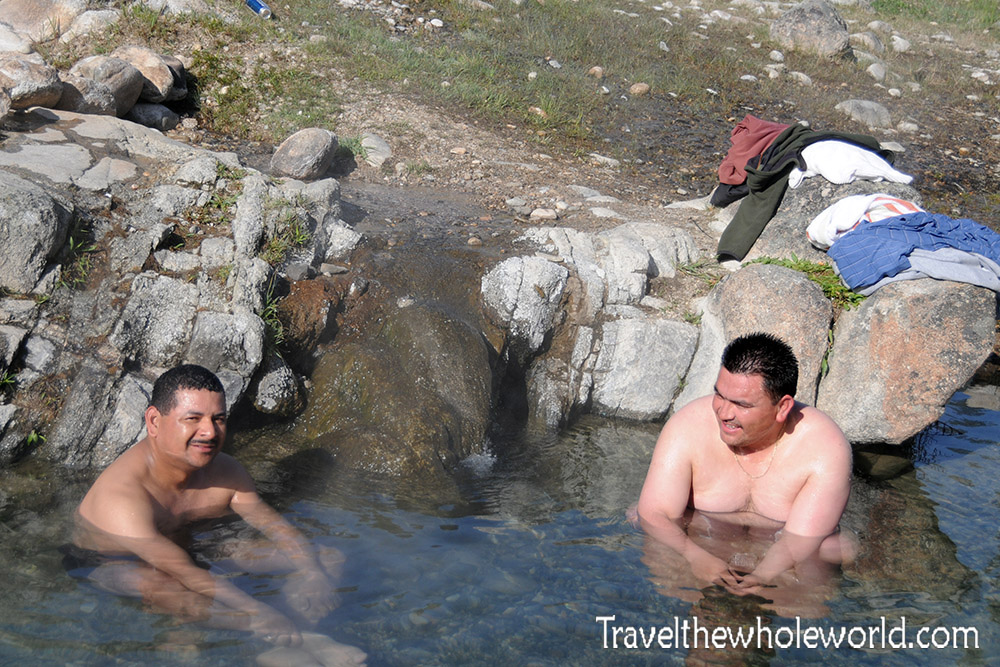 My first real trip to Idaho’s outdoors took me a couple hours north to a small town named Lowman located in the Sawtooth Wilderness. Lowman is famous for its hot springs which are so abundant they are impossible to miss. These hot springs above were steaming heavily in the morning just off the highway so I took a jump in with my girlfriend. The water was extremely hot directly below the runoff,, almost too hot to touch, but I found the center of the pool was much more reasonable. I spent the night here in Lowman and my humble cabin even had its own backyard with a small hot tub fed by natural hot springs. The owner of the cabin and nearby land seemed a bit too serious and disgruntled. My girlfriend asked him if he owned the horses which were kept in a nearby stable out back at which he replied, “My wife feeds the horses and I get to shovel the shit”. 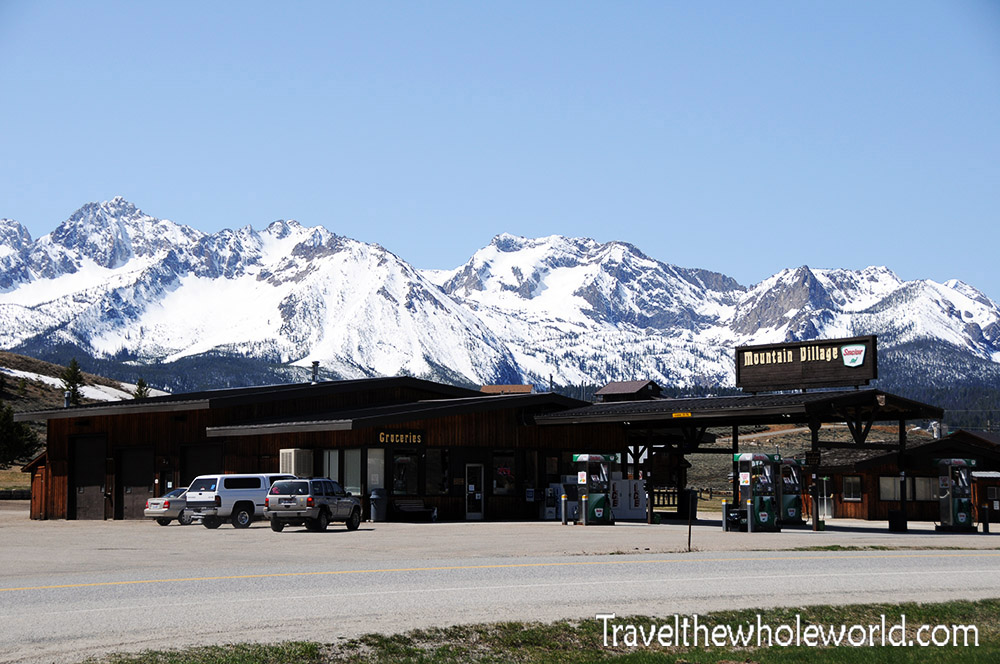 After enjoying the hot springs I made a trip to Stanley which is known for being a gateway for Idaho’s wilderness, and from here many people begin their camping or hunting trips. Stanley itself has a few lodging options despite being a town of only about 60 people. Above on the left is a house built along the Salmon River. On the right is a small grocery store and gas station with the sawtooth mountains in the background. These two photos above were taken in late May, but my understanding is that snow lasts year around at the higher elevations of the Sawtooths. 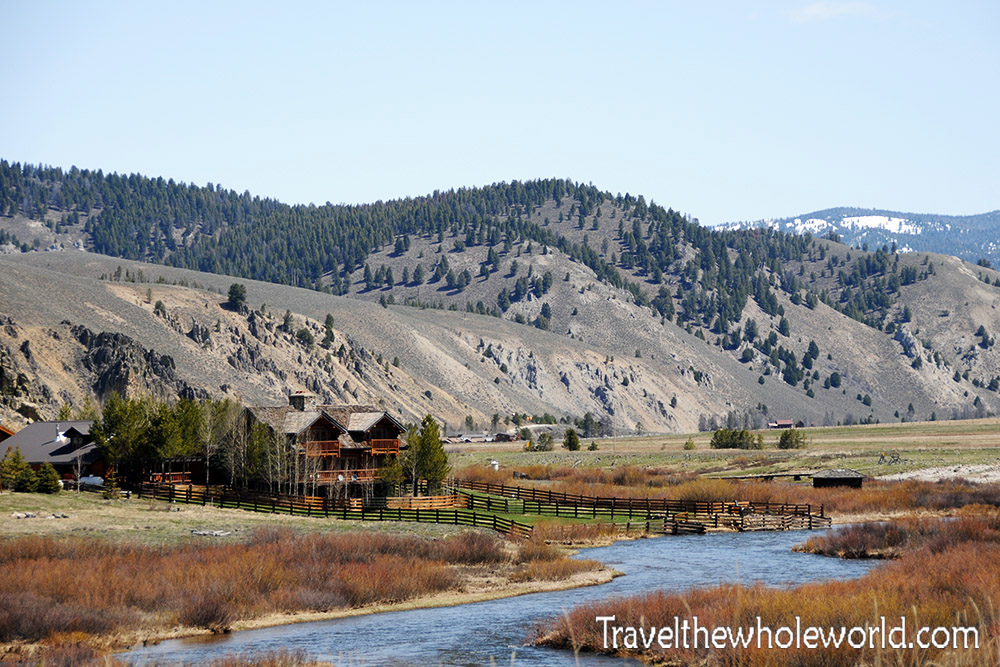 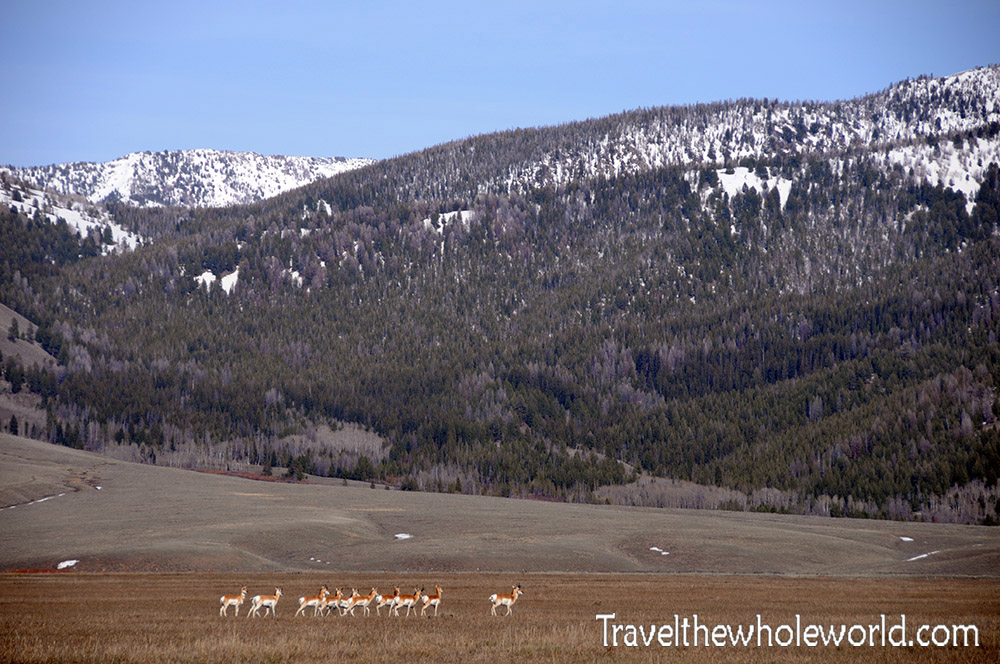 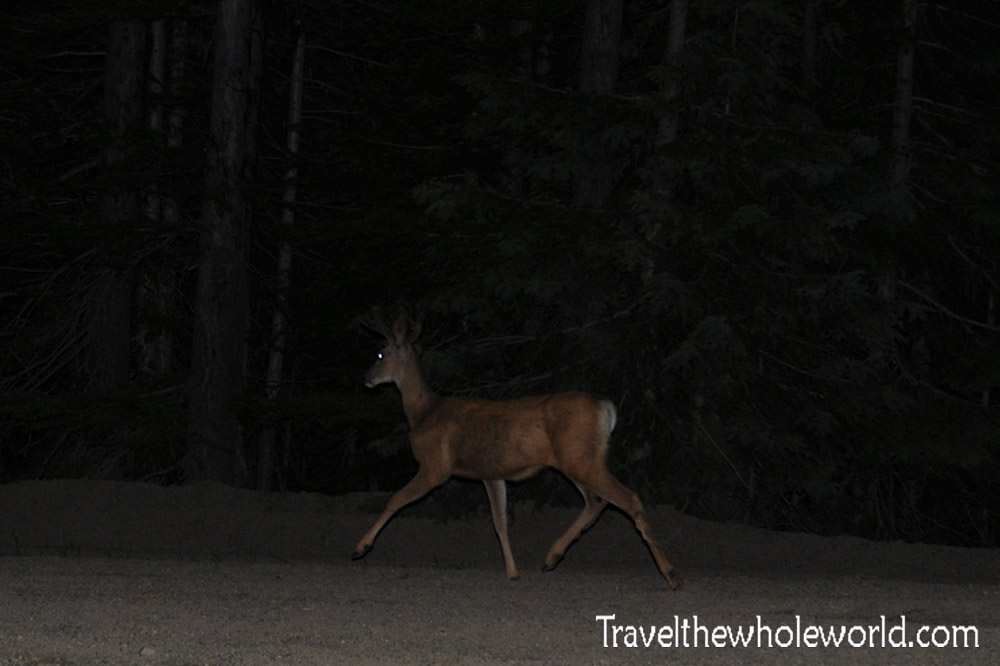 While passing through the Sawtooth Wilderness it was impossible not to miss the herds of pronghorn roaming the Sawtooth Valleys. Most locals here referred to the pronghorn as Antelope, although there are no true antelope species in the western hemisphere these guys are essentially the same thing. On the left is a small herd of pronghorns being led by its fearless leader across the Sawtooth Valley. The pronghorn to me looked like a decent size, I’d guess they were easily over 200lbs but things I read online suggest they only get up to 150lbs. On the upper right was a night shot I took of a white tailed deer that was right outside my lodge. 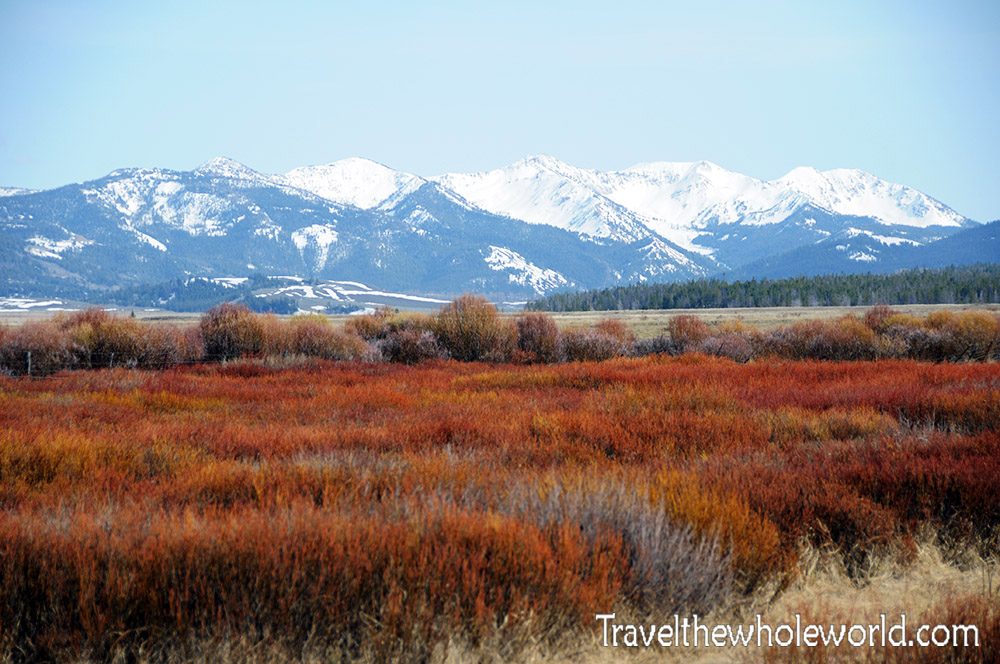 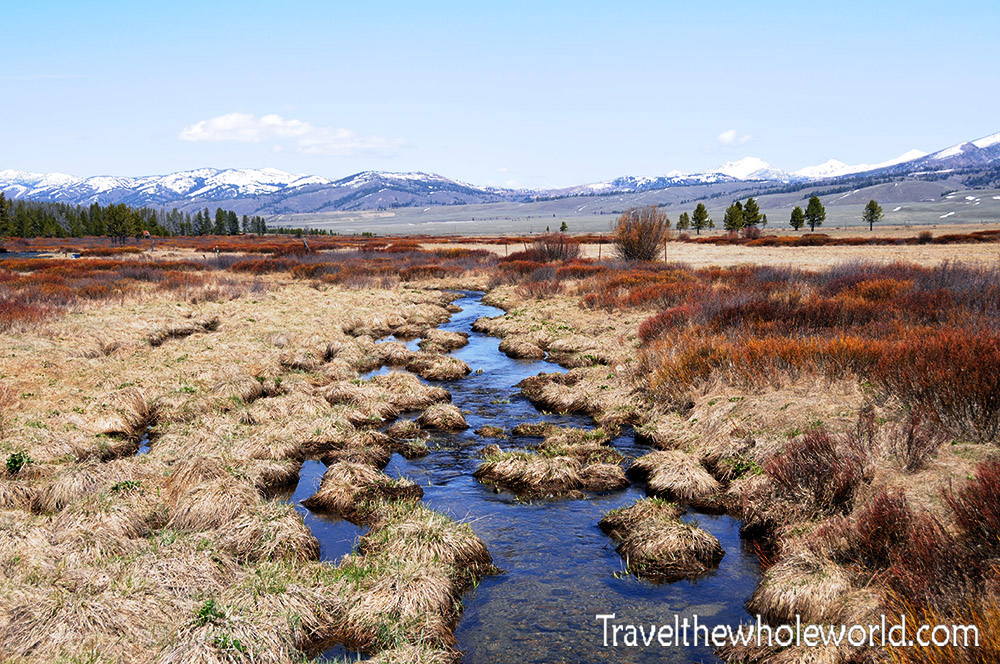 Central Idaho has some amazing scenery. When I visited in late April, the weather was cool and colors were beginning to return to the plains. On the left is a photo of a small creek passing through a large meadow, while on the right you can see some of the color returning to the grass. 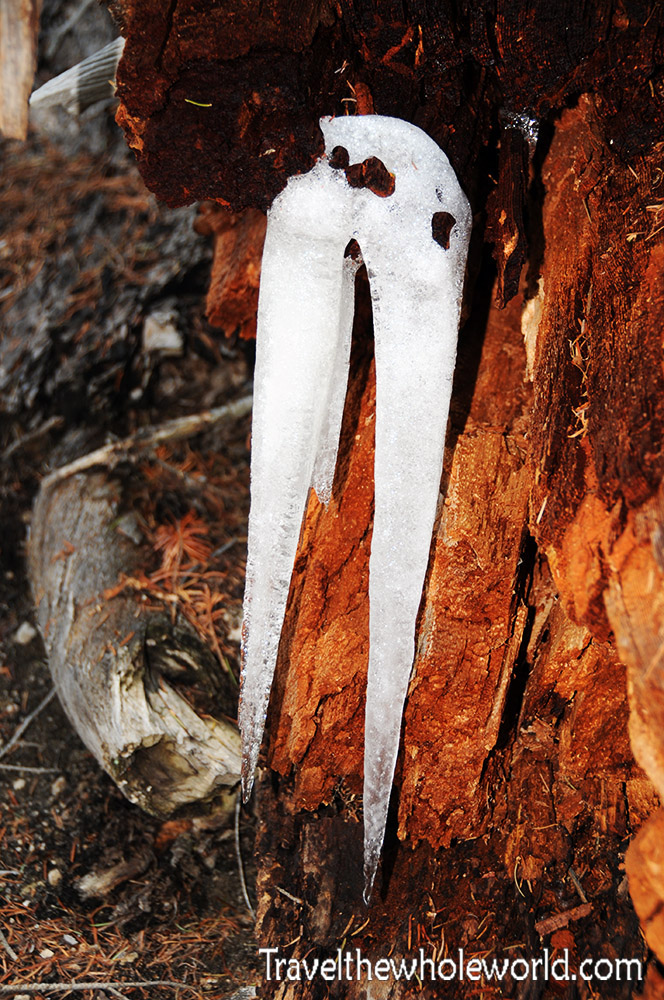 From Stanley I attempted to do a 10 mile round trip hike up to a lake resting at 8,500 feet. I had done my best to research the area and found that there was no snow at the starting point which was 7,000 feet. Unfortunately the road leading to the beginning of the hike was still closed, so I had to park two miles away which turned this into a 14 mile hike. As I began my trek I came across a lot of different terrain and plants that I normally don’t see back home in Virginia. For the most part, evergreen trees seemed to completely dominate the forests of the Sawtooth mountains. I didn’t see a single deciduous tree in these mountains, and figure they are unable to withstand the higher altitude and cold winters. On the left is an icicle that I thought kind of looked like a walrus. On the right is the remains of a pine tree looking up from its base. 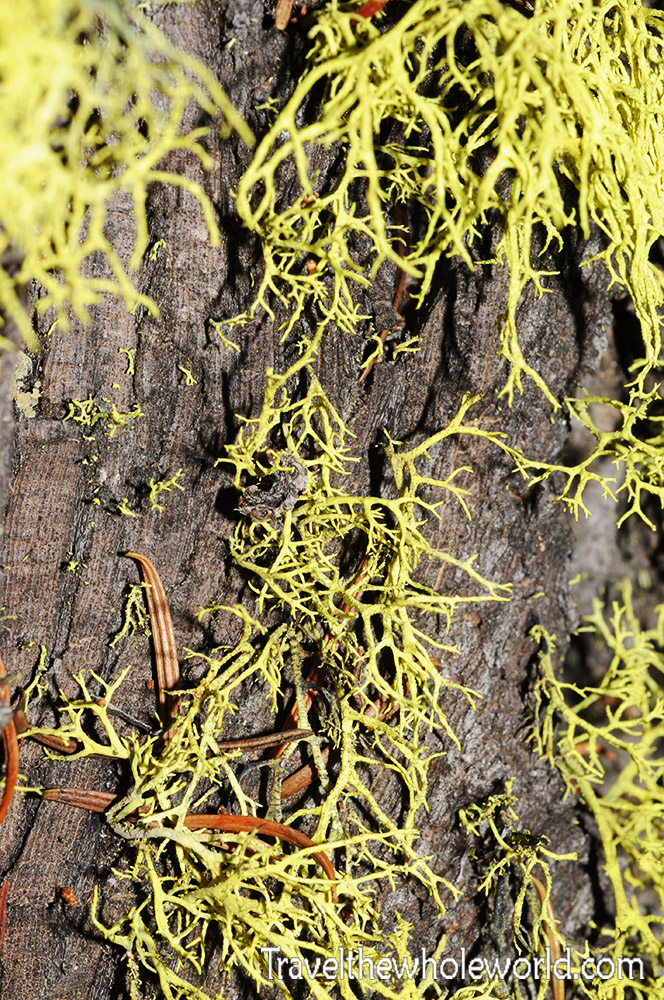 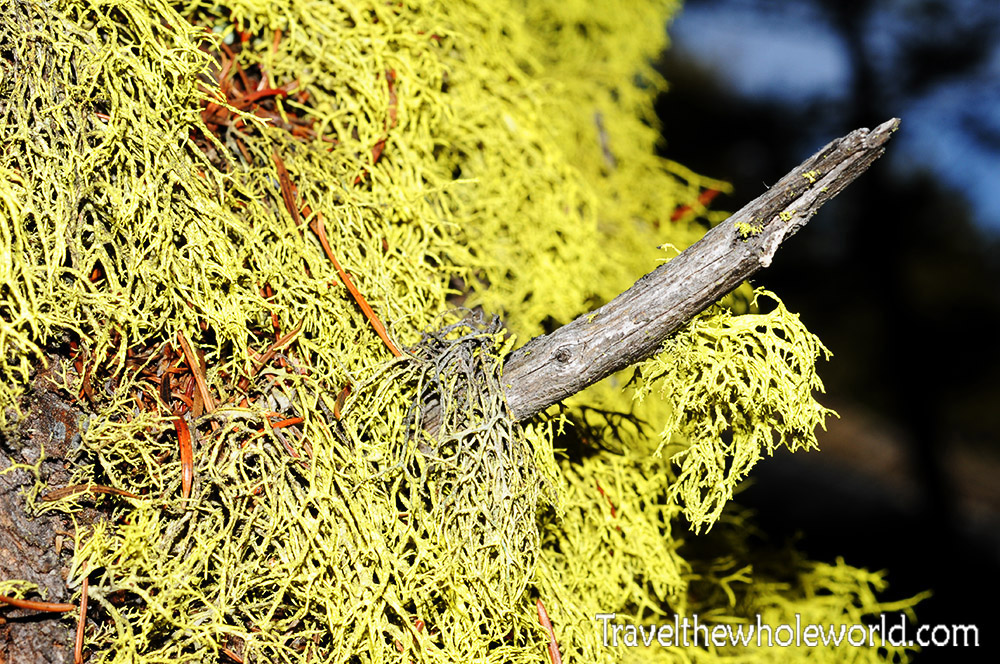 While the pine trees dominate the Sawtooth Wilderness, some of the pine trees themselves were dominated by thick bright green moss. I’ve never seen moss with such strong colors like this before, it almost appeared as neon. I’m also surprised that it can survive the subzero temperatures that are common in the high altitude forests of the Rocky Mountains during their long winters. Normally I associate bright colors with tropical rainforests and warmer climates, so that’s why I wasn’t expecting such colorful moss in the rocky mountains. 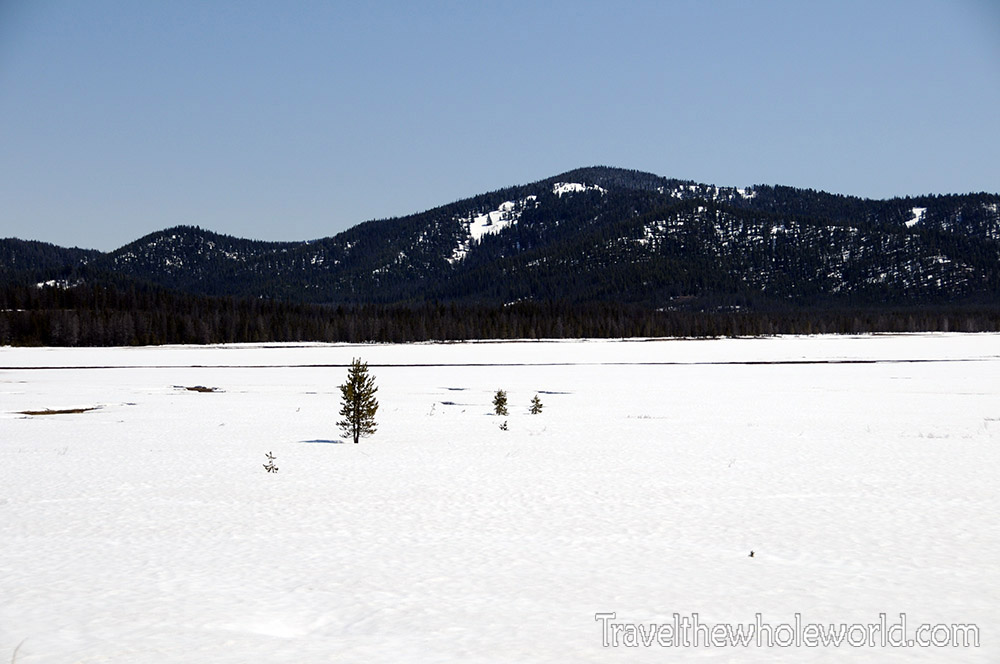 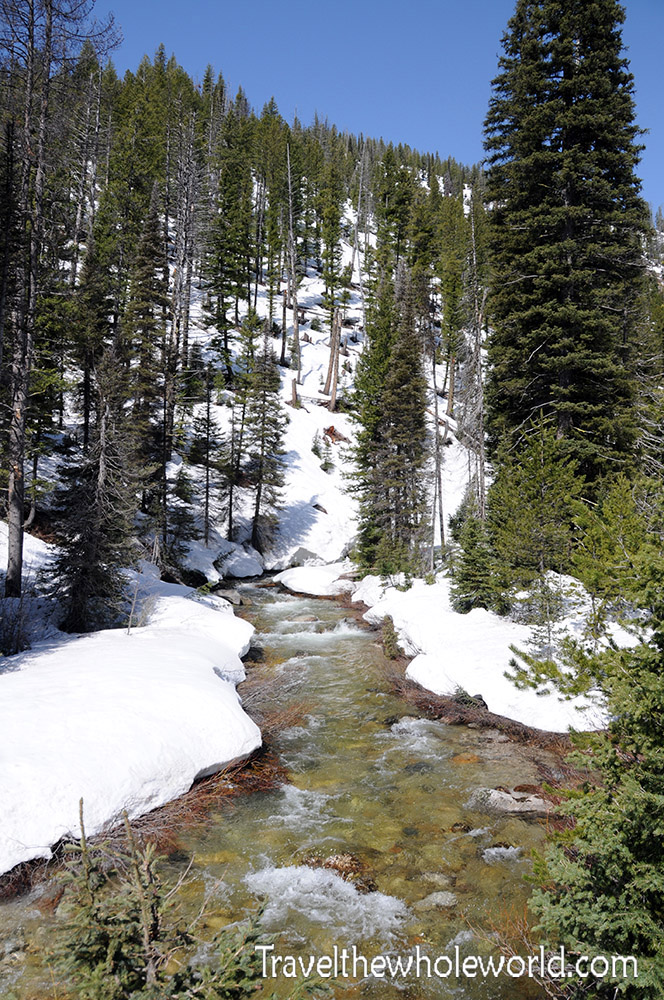 As the elevation got higher snow started to appear in small patches then seemed to immediately turn into deep with occasional spots that were over two feet deep. These two photos were actually taken outside the hiking area I was in but were about the same elevation. In 2012 we had a very warm winter in Springfield, Virginia, and I didn’t get to see any snow at all the entire year. By late March when temperatures were starting to hit close to 80F I accepted I would have to wait another year to see snow. Imagine my surprise when a full month later I was passing by huge deep snow fields like this one above. Despite being April and everything covered with snow it’s still considered spring here, and one of the most obvious signs is the creeks thawing out and sending crystal clear water rushing down the mountains to the colorful meadows below. 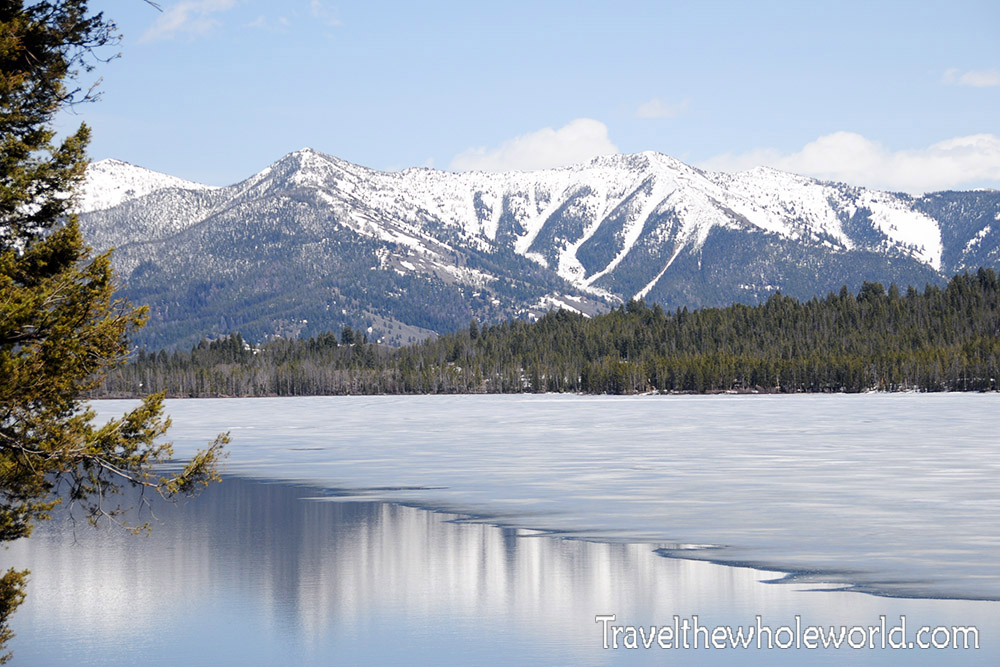 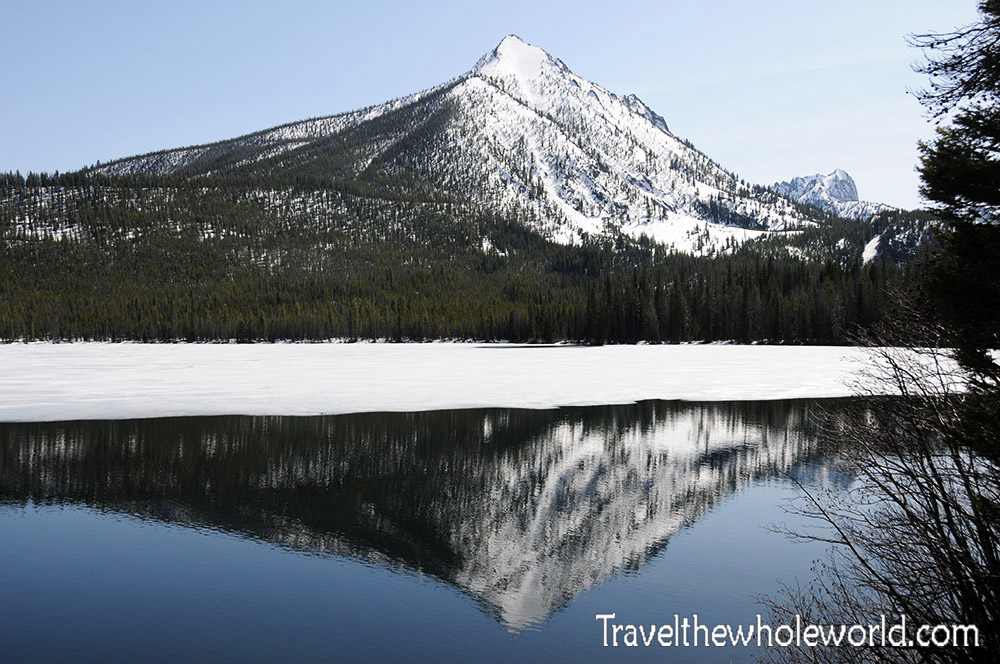 I continued my hike towards 8,500 feet, but by the time I was close to 7,500 the snow was getting way to deep. Each step I took sent me falling into snow that went almost up to my knees and put a lot of wet snow into my boots. If I had snow shoes I could have easily continued on, but at the pace I was traveling at I knew I wouldn’t be reaching Alice lake within a reasonable time. Perhaps I can return when most of the snow has melted away. Fortunately at the beginning of the hike I did pass by another beautiful lake called Pettit Lake. This lake at 7,000 feet had plenty of ice in it, so I imagine Alice lake at 8,500 feet may have still been frozen solid at this time. 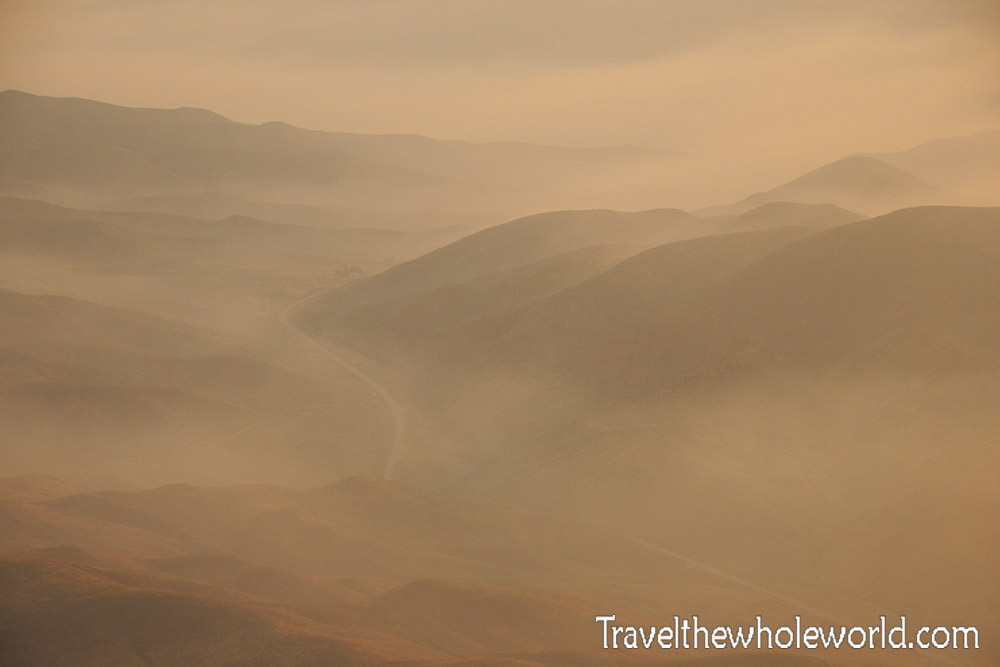 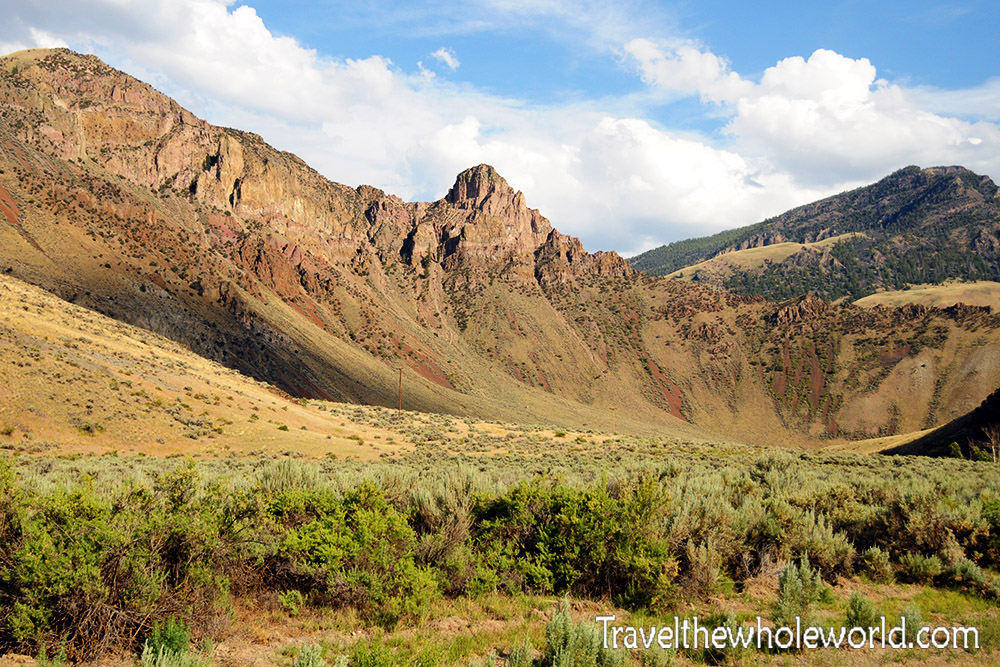 The winter in the Sawtooth Wilderness is definitely spectacular. I was able to see both winter and summer here. The photo on the upper left was taken of some mountains in the southwestern part of the state. Outside it smelled like a chimney due to a large forest fire. The photo was taken early in the morning and I think the mountains are foggy in the bottom with the sky filled with smoke. The mountain on the right was taken in north eastern Idaho, one of the most beautiful mountains I have seen in the state!