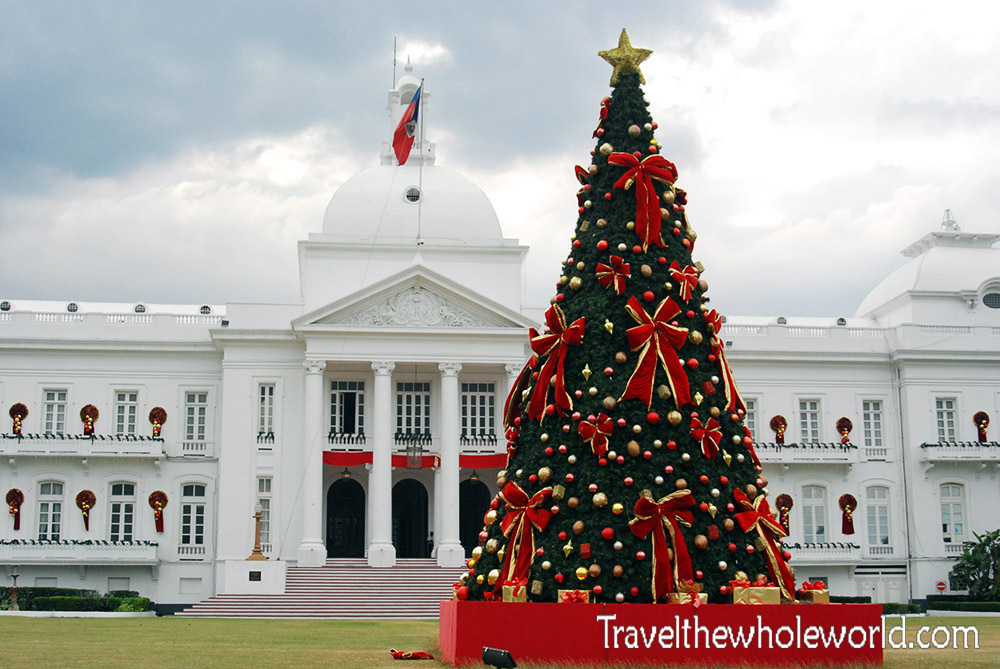 My trip to Haiti started in Port Au Prince in late December. I visited exactly a year before the devastating earthquake that rocked the nation. The country’s infrastructure was heavily damaged by the earthquake, and I was lucky to see parts of the country before this tragedy occurred. Above is the beautiful Presidential Palace before it was completely destroyed a year later. 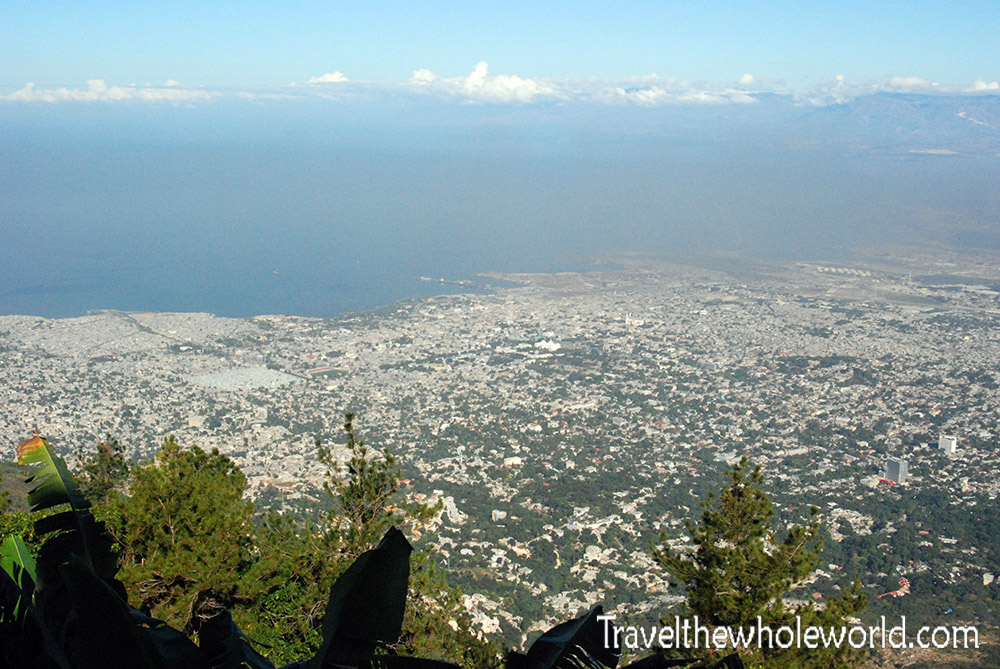 Haiti is a very mountainous country, but the capital Port Au Prince was built on a flat piece of land next to the sea. The city itself has over a million people with another 1.5 million in the surrounding suburbs. At all times of the day and night, you’ll see large numbers of people on the streets. From high above, Port Au Prince looks like a large suburb instead of the dense and busy city that it is. This photo was taken from a short drive from the capital where you can get great views in all directions. Since there seemed to be virtually no tourism in Haiti I was surprised to find several pushy people selling souvenirs. It seemed like the next traveler might not come out here for months so I felt obligated to support the locals! I ended up buying a few traditional hand carved items that were hand painted blue and red; Haiti’s national colors. Below is another photograph I took from here on full zoom of the Presidential Palace. 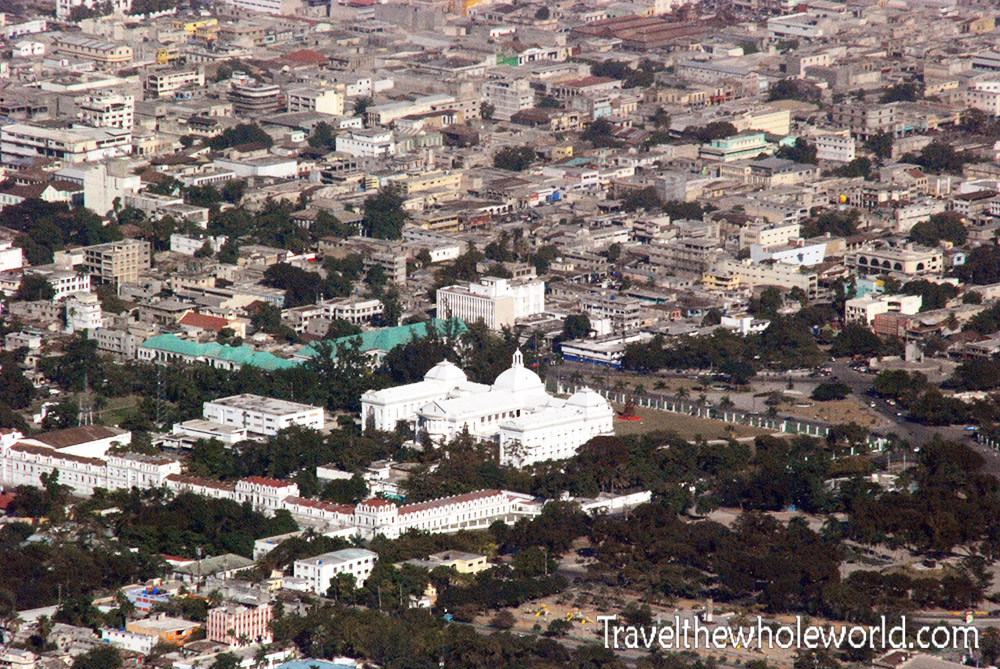 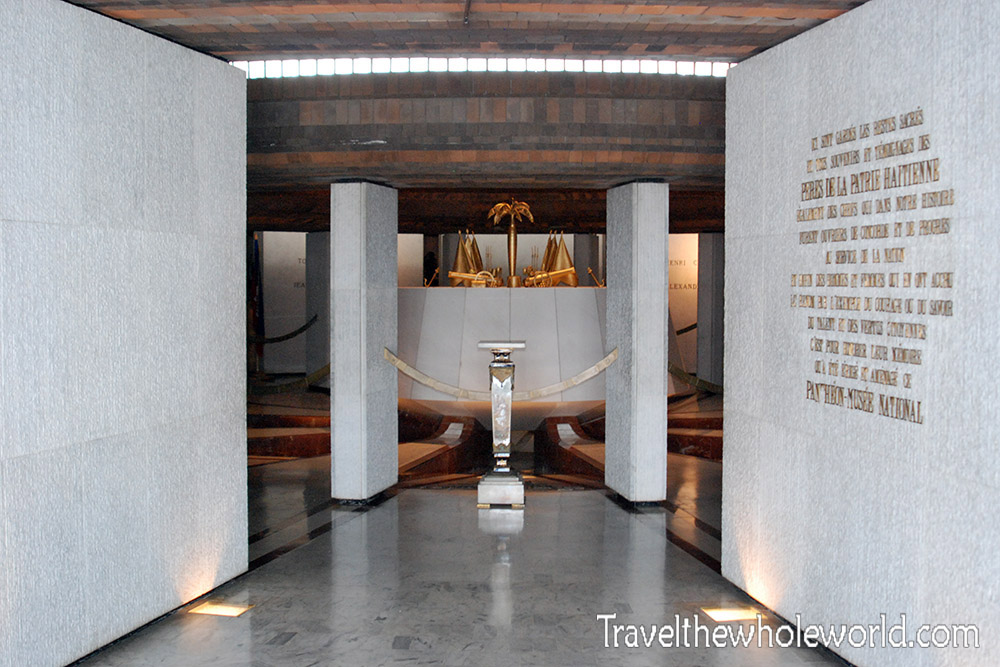 One of the best places to start your travels in Port Au Prince is the National Museum of history in the city center. The museum is relatively small and to the point, but it’s a great way to catch up on Haiti’s history. It has lots of interesting artifacts and information on the island before the arrival of Europeans. Probably the most interesting artifact in the museum is the anchor from Christopher Columbus’s ship the Santa Maria, which crashed here on Christmas of 1492. No photos are allowed once inside the museum, but I didn’t realize it until after I took this one at the entrance! This is a tomb of four Haitian rebel leaders, who are considered to be the first national heroes. 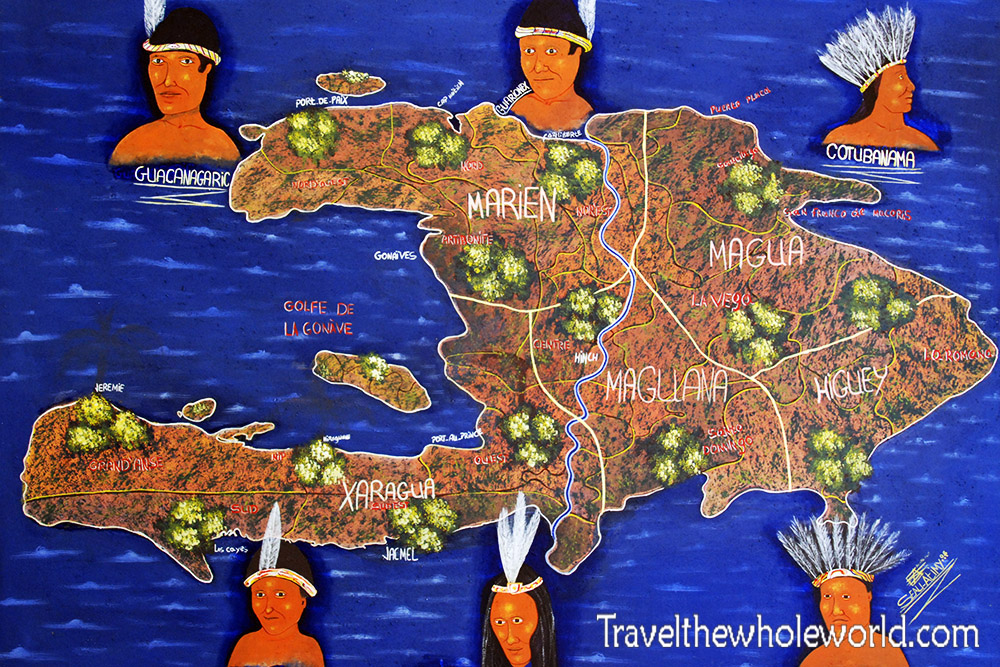 In the museum I was able to learn just about everything about the nation. In a few hundred years the island of Hispaniola changed drastically. Originally this island was home to several native American tribes, mostly Taino and Arawak Indians. Things didn’t work out so well for them after Christopher Columbus discovered the new world when he landed on Hispaniola in October of 1492. This later led to both the Spanish and French colonization of the island, and within a century the natives were all but extinct. In order to provide the man power for the development and farming both the French and Spanish made use of slaves. The only other photo I could get was this of the map above that shows some of the tribal people before the European arrivals. The photo below was part of the museum on the outside, where I could take all the photos I wanted. 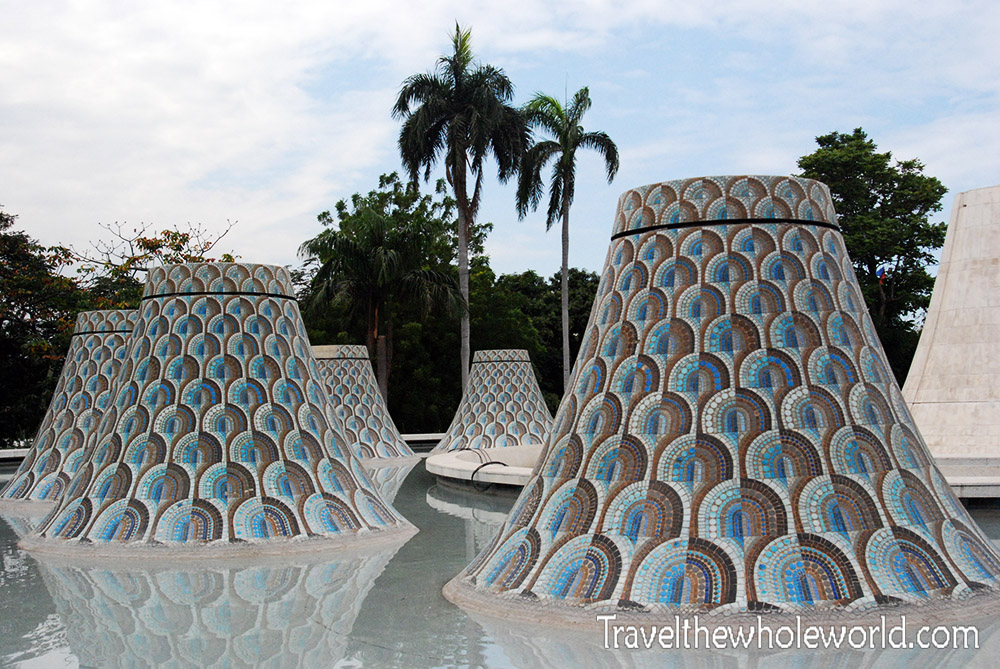 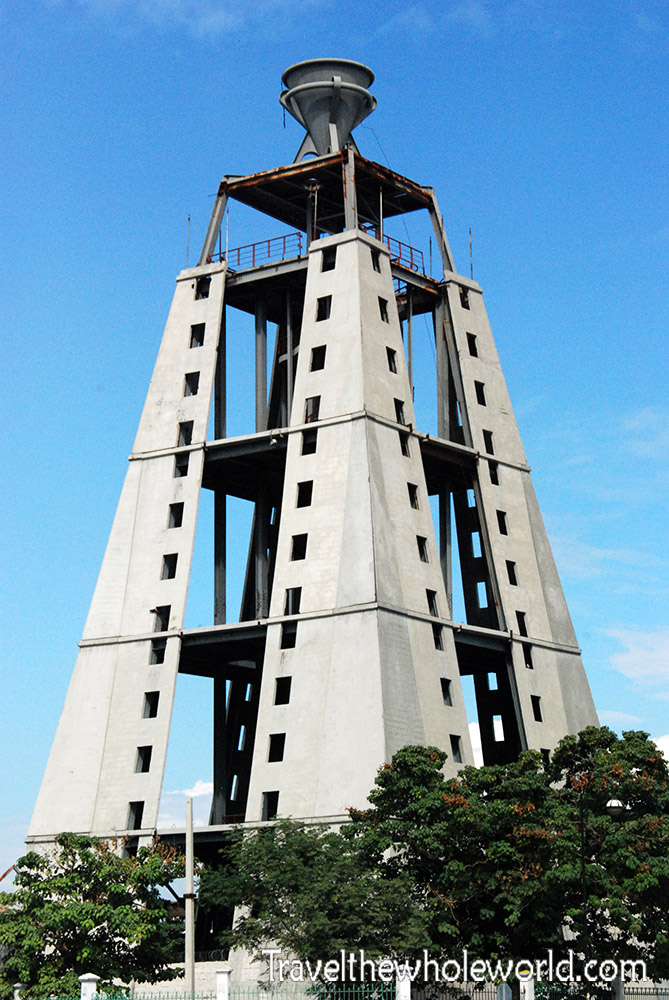 With France and Spain splitting the island, the two nations had their share of territory disputes until the Treaty of Ryswick was signed in 1697. This gave the French the western third of the island and while the Spanish kept the majority of Hispanola. In 1804, Haiti became an independent nation aver a successful slave rebellion, while the other half of the island became the Dominican Republic. It’s not easy for Haitians to travel to the Dominican Republic, so there is little influence between the two countries despite them sharing a small island. I’ve been told by locals who made the six hour journey that going from Haiti’s capital to the Dominican Republic’s capital is like visiting another continent. Just outside the national history museum is the bicentennial monument; celebrating Haiti’s 200th year of independence in 2004. 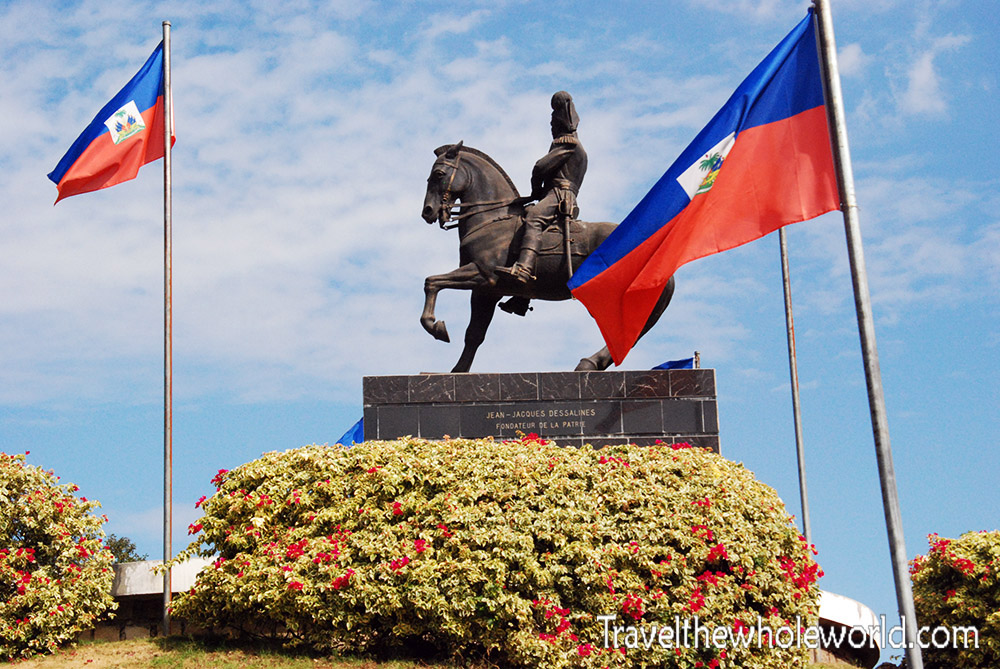 Around the museum is where you’ll find several small parks, monuments and statues. Above is a statue of Jean-Jacques, one of the founding fathers of Haiti who helped lead the successful rebellion against the French. After the revolution, Jean-Jacques declared himself Emperor of Haiti in 1804 and was the nation’s first official ruler. 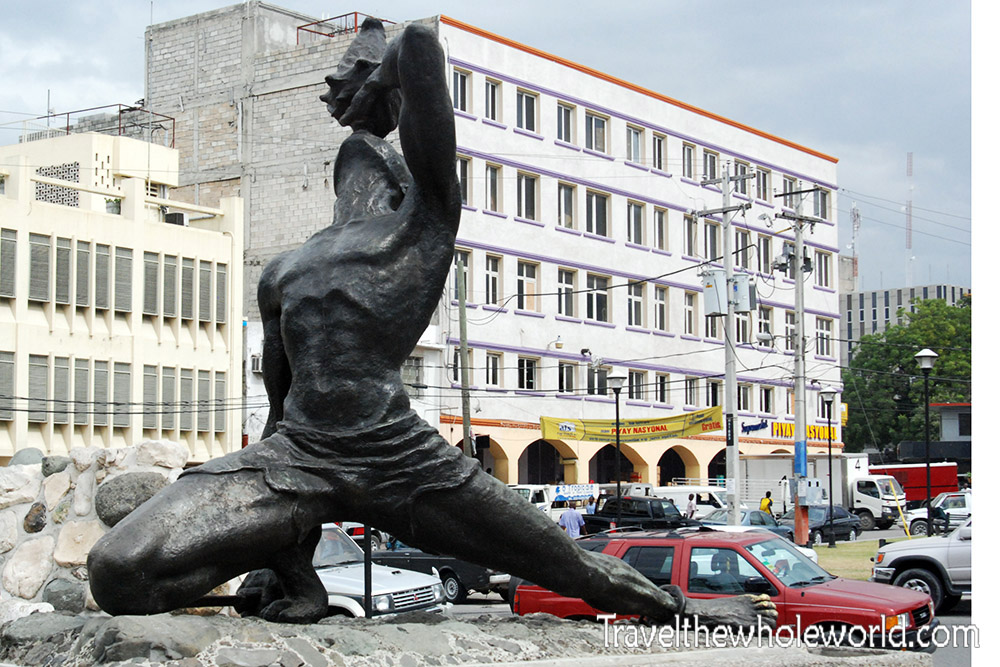 While I was taking this picture of the slave memorial a local Haitian came up to me and offered to take my photo. I politely declined but he kept insisting that he should take my picture because he was a professional photographer. I am willing to bet he would also have proved to be a professional athlete had I given him my camera. 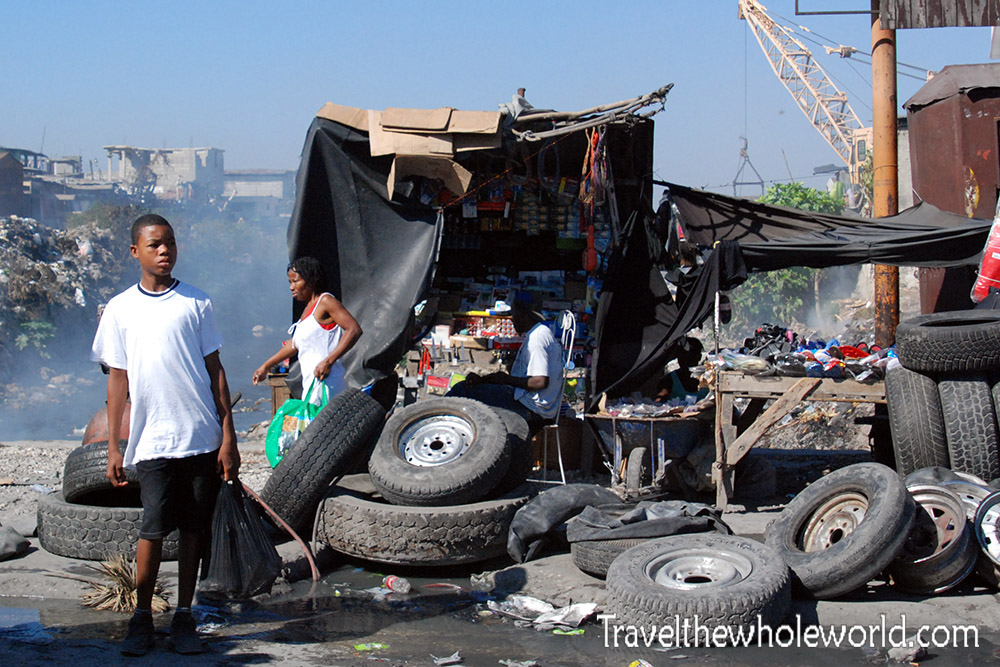 The downtown area of Port Au Prince next to the museum and government buildings are some of the few parts of the capital that are in decent shape. Honestly some other parts of the capital can be pretty scary. One neighborhood Cite Soleil has an especially dangerous reputation. Port Au Prince is one of the poorest capitals in the world, and I honestly thought many parts of Kabul, Afghanistan were in better condition. 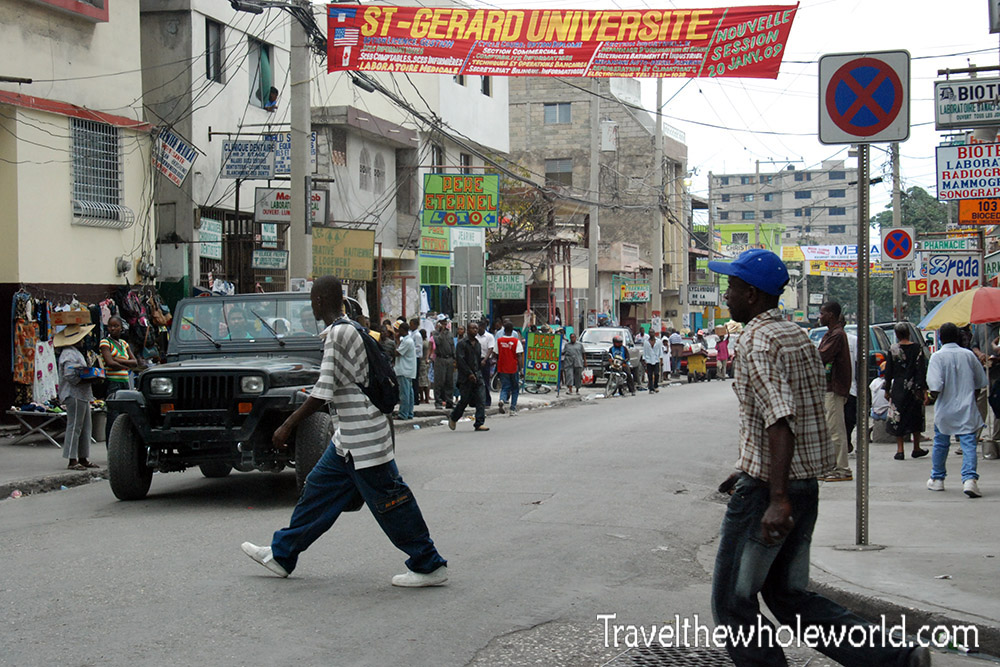 Despite the poverty, Port Au Prince was one of the most unique cities I’ve ever been to. I actually felt pretty safe in the city center, although a few random people did shout out blanc, or white. There were several UN patrols like the one below to help with security. One interesting experience of this trip was driving through Port Au Prince at night. In one large neighborhood I passed through, having any kind of electricity seemed to be a luxury. Most of the shops that were open used candles while the rest relied on headlights from the busy roads. There were thousands of people walking around holding candles and crowding up the streets. It almost felt like Halloween, yet it was just another evening in Port Au Prince. I wish I had a photo to share because I’ve never see anything like it. 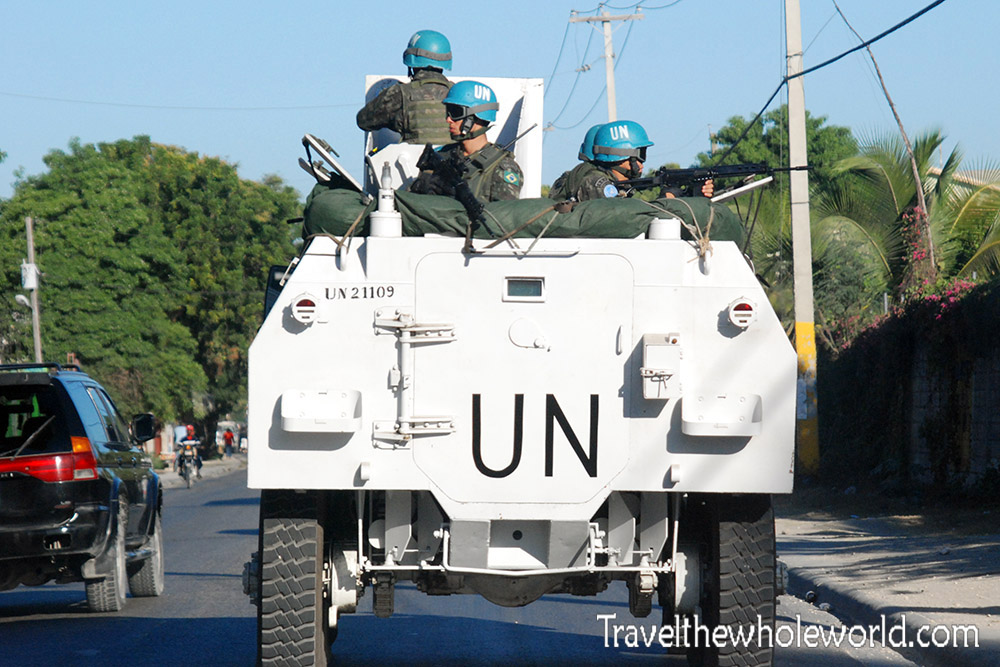 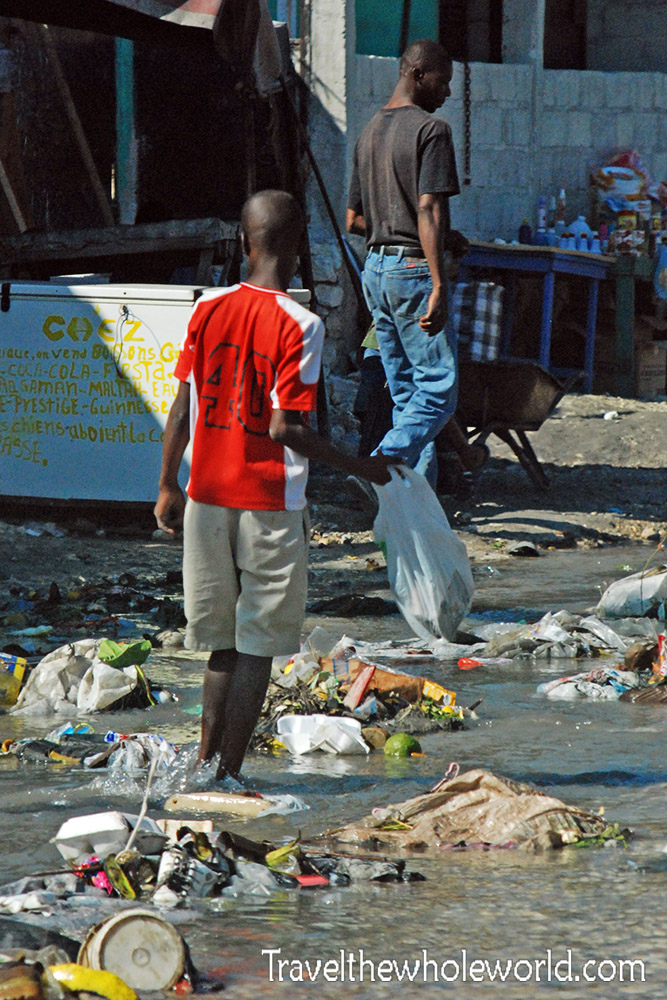 I’m not trying to focus on any negatives of the country, but I couldn’t ignore this river of trash running down a street that I saw. You can see that a kid is even trekking through it barefoot and doesn’t seem to be the least bit concerned. 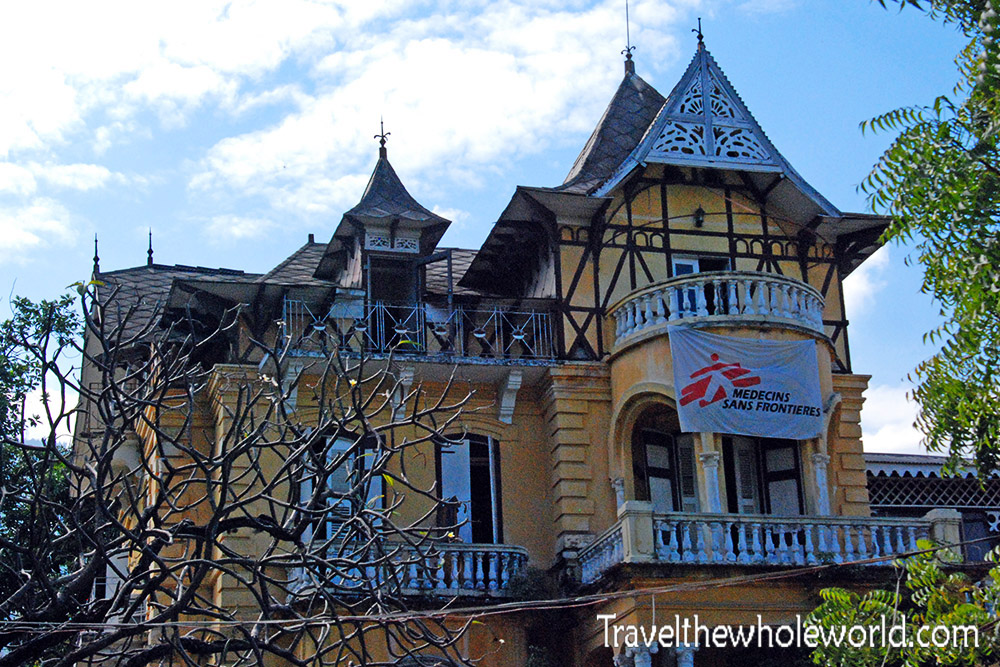 Haiti certainly has a lot of issues to overcome, but fortunately there are many NGOs working in the nation to help the civilian population. The photo above shows a picture of an old colonial mansion in that has been converted to a clinic by a European group. Below you can see an “ambulance” I saw driving around Port Au Prince. 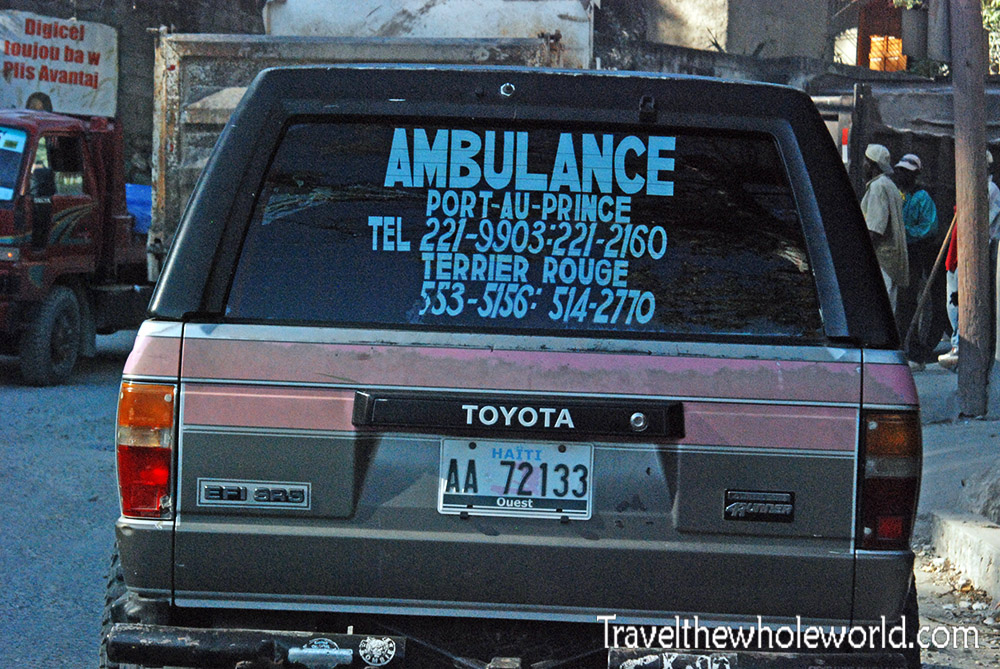 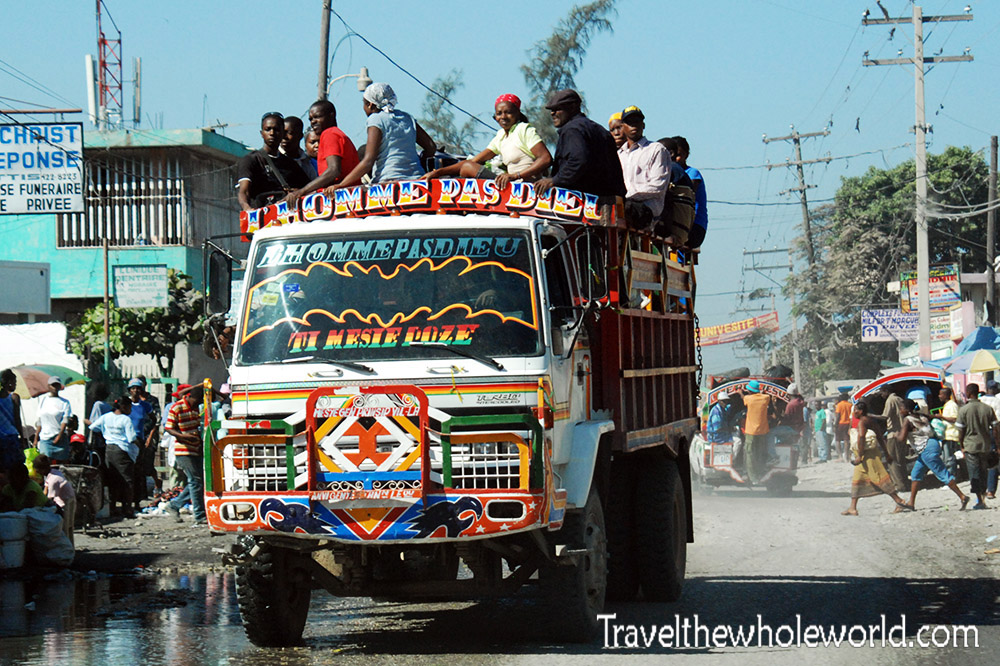 Surrounding are some photos of everyday life in Port Au Prince. The local transportation known as tap-taps were always packed. They are a cheap and easy method to get around, and maybe that’s why they are overused with some having people hanging on for life. With so many other crazy drivers on the streets I’d be worried about being side swiped by aggressive drivers, so they are probably best left to Haitians unless you speak the language and know where you’re going! While roaming around the capital, I visited one of the city’s random markets photographed below. 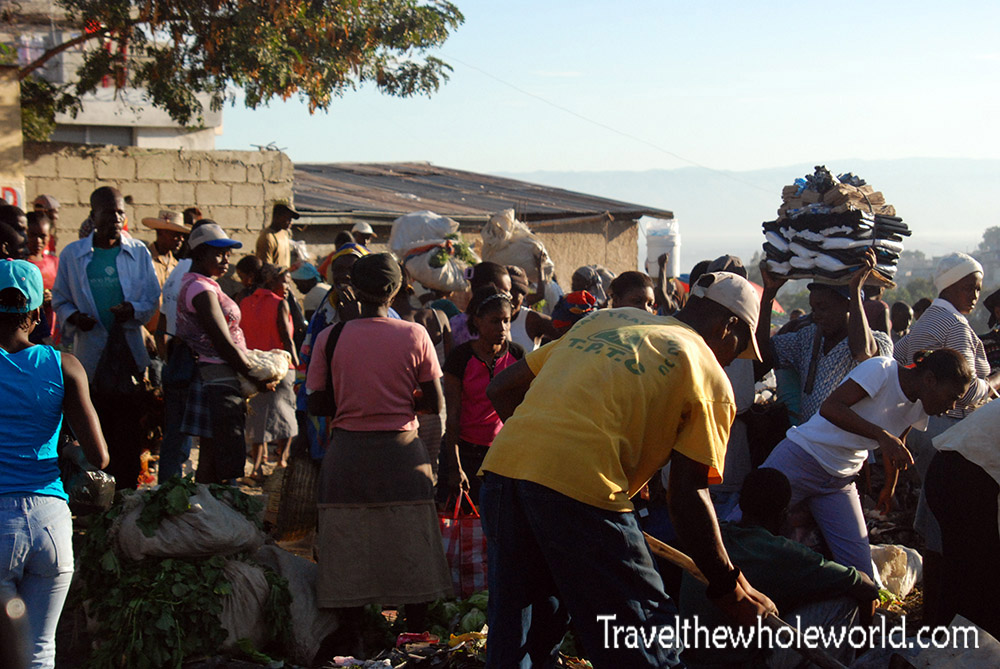 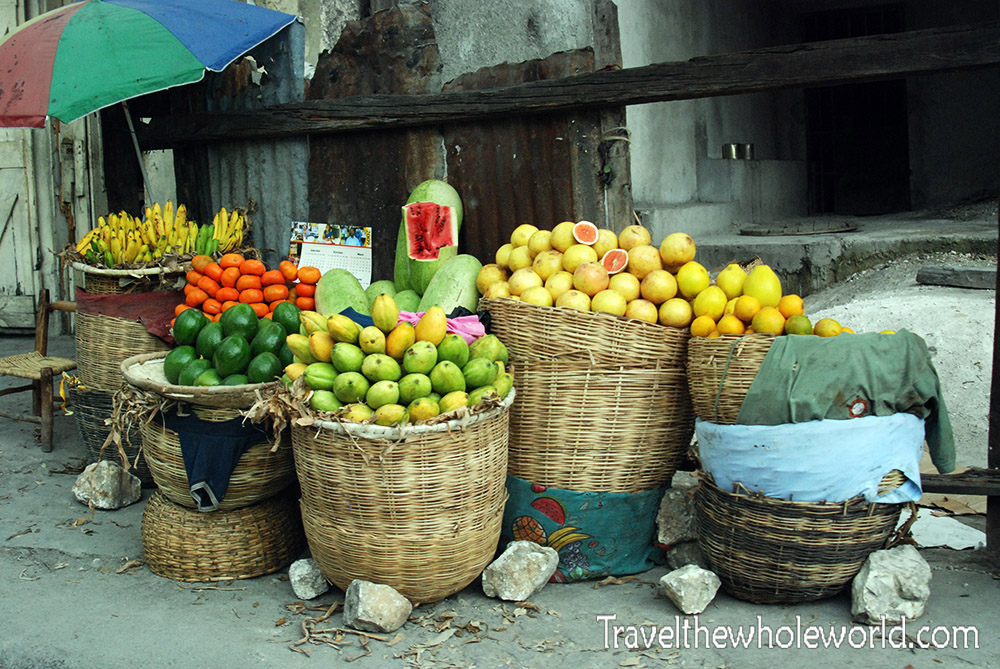 Most of the markets I came across sold fruits and vegetables like in these large baskets above. Another market I came to sold basic clothing items like jeans and shoes. I’ve been to some countries where people have loads of goods for sale but not a customer in sight. That was kind of true for the clothing market, but most of the markets I came to in Haiti they all seemed to be swamped with people. 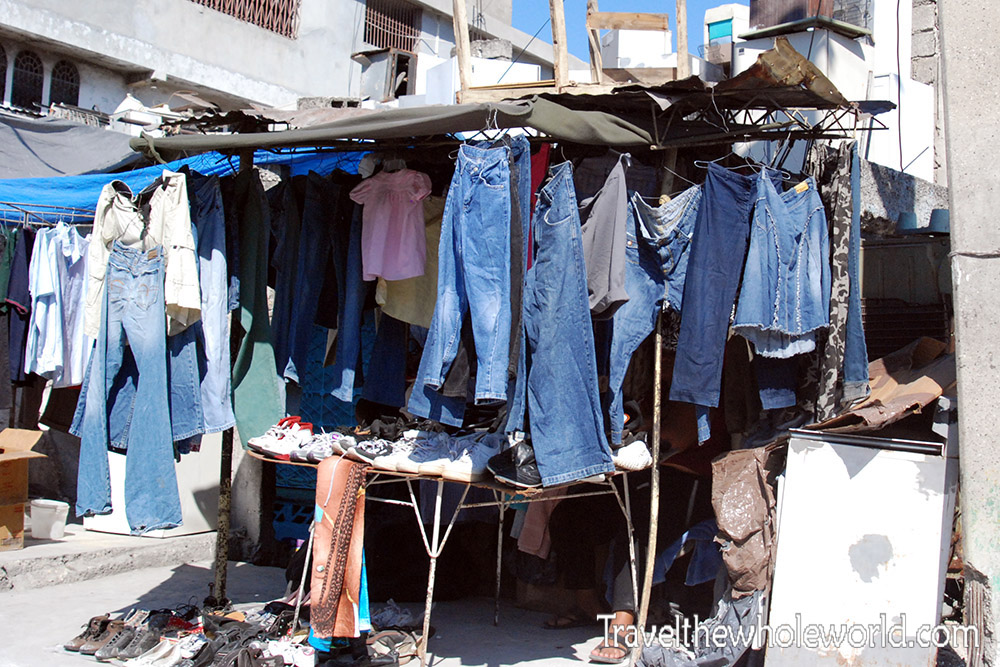 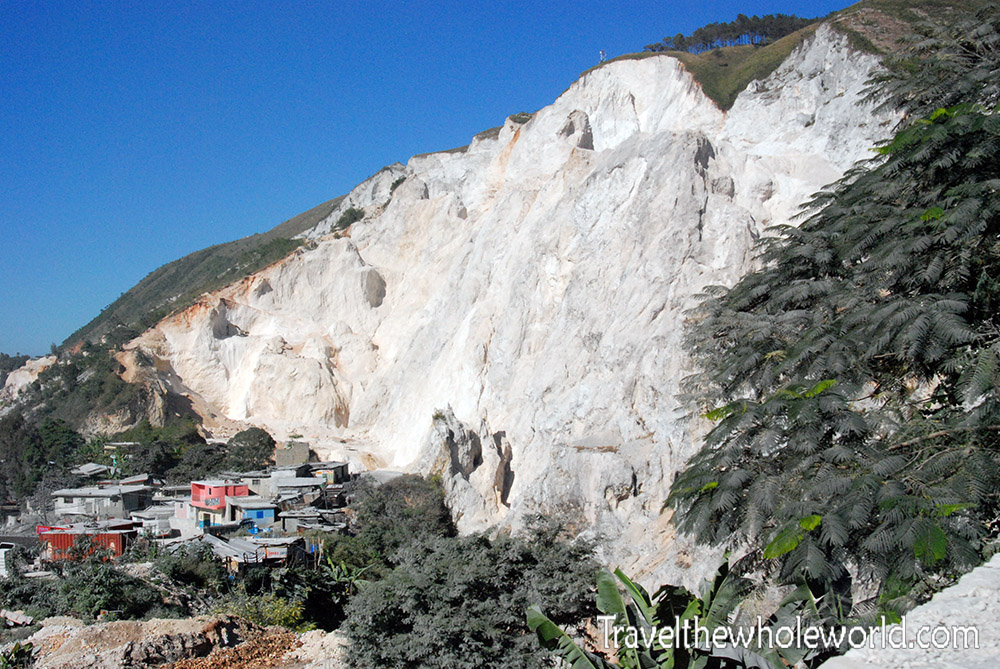 Clothing and produce isn’t a problem in Haiti, but something that is seriously lacking are woodlands. There aren’t many places left in Haiti where you can find large supplies of lumber for building material. Most buildings are made out of concrete or stones which was one of the reasons the earthquake of 2010 was so devastating. This photo shows a mountain side that was carved out to make bricks for structures. Just across from the mountain was this castle like building photographed below. I was told it’s actually a rum distillery. From my understanding it is no longer functioning, or will at least be closed for some time. I had hoped to take my first tour of a distillery here, and bring back Haitian Rum to the US where I would celebrate a successful trip to Haiti with friends. Maybe next time. 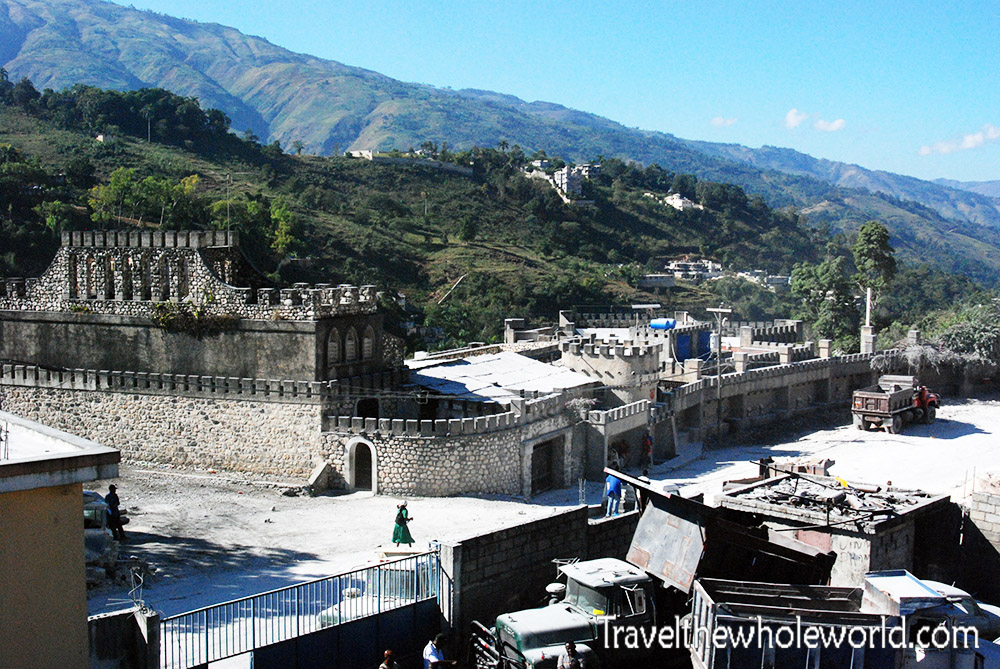 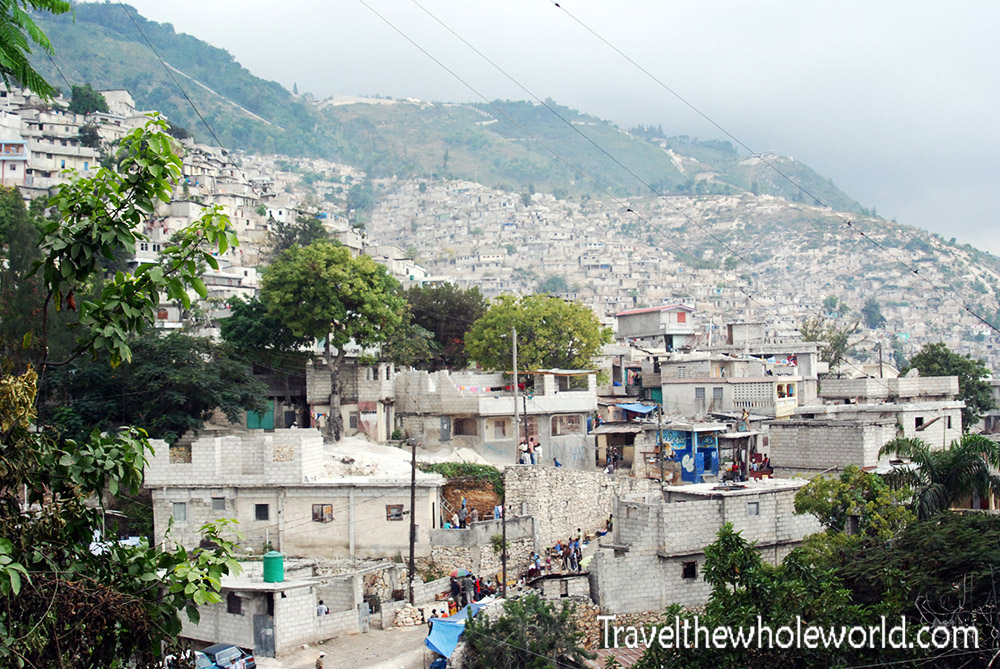 I’ll finish up my Port Au Prince page with the best neighborhood in the city. Petionville has a good reputation for its lower crime and beautiful views. The hotels here were a bit expensive because many of them employ armed guards, but they are also a higher class than other parts of the city. I saw other foreigners in Petionville, but all were here for business and none showed any interest in joining me on my adventures :(. When the evening came I decided to eat at my hotel’s restaurant. I was happy to see that the menu had so many options that I found it difficult to make a decision. When I finally found the perfect meal I was disappointed when the waiter said it was unavailable. Going down to the next best option, I was told again it was not available, and so was the next, and the next. It was obvious that it’d be easier for the both of us if the waiter simply told me what they did have. It turns out they had only two dishes available and each for the ridiculous price of $20! The waiter seemed both surprised and offended when I questioned how they only had two choices from a rather large menu. The food was pretty good once I received it, even if it was a bit over priced. 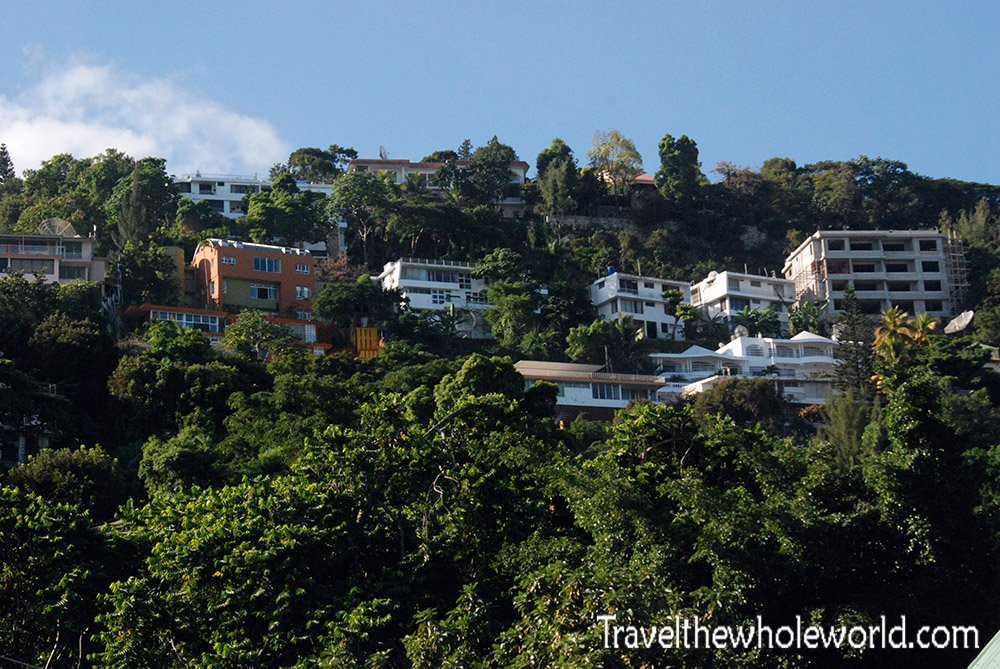 As for the rest of Petionville, it’s still not completely developed so there weren’t exactly restaurants lining the street, but there are still options. The photograph above shows some of the larger houses in the neighborhood. While Petionville is a relatively safe neighborhood no one should think it’s immune to violence. The first night in my hotel I heard about 23 gunshots right outside my room. The gunfire seemed to be a combination of pistol and shotguns that went on for several hours around midnight. It could have been a gang fight or perhaps other disgruntled customers of the restaurant venting their frustration. 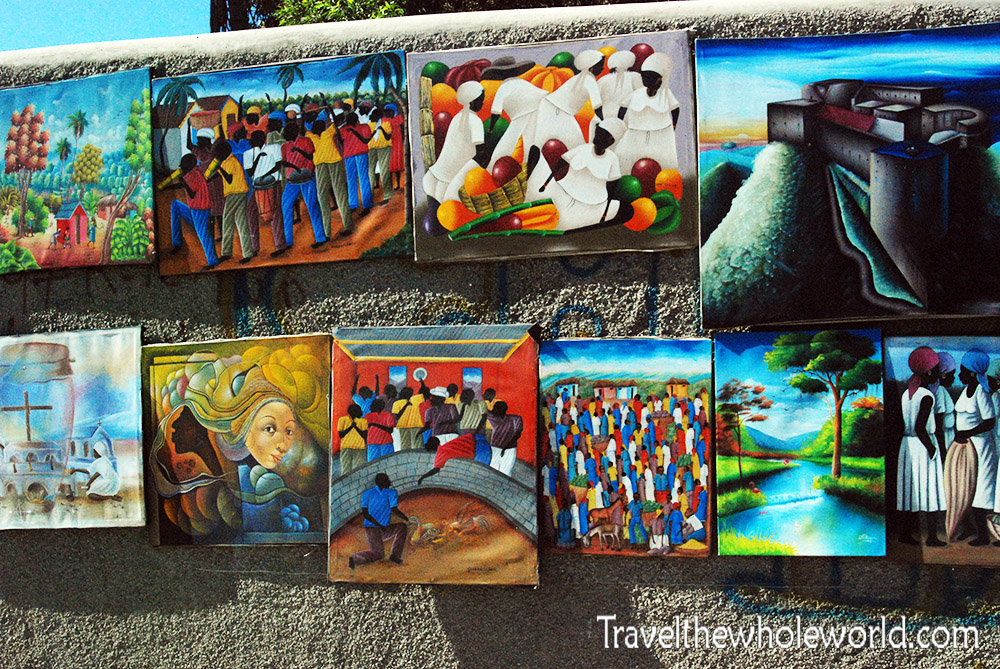 One of my favorite things about Petionville was the assortment of art work they have for sale. Boring grey concrete walls that lined the streets had been converted to outdoor art galleries filled with vibrant colors by Haitian painters. The artists depict famous places in Haiti, the country’s natural beauty and community festivals. I did see similar art work in the capital, but not nearly the same variety or volume as Petionville. 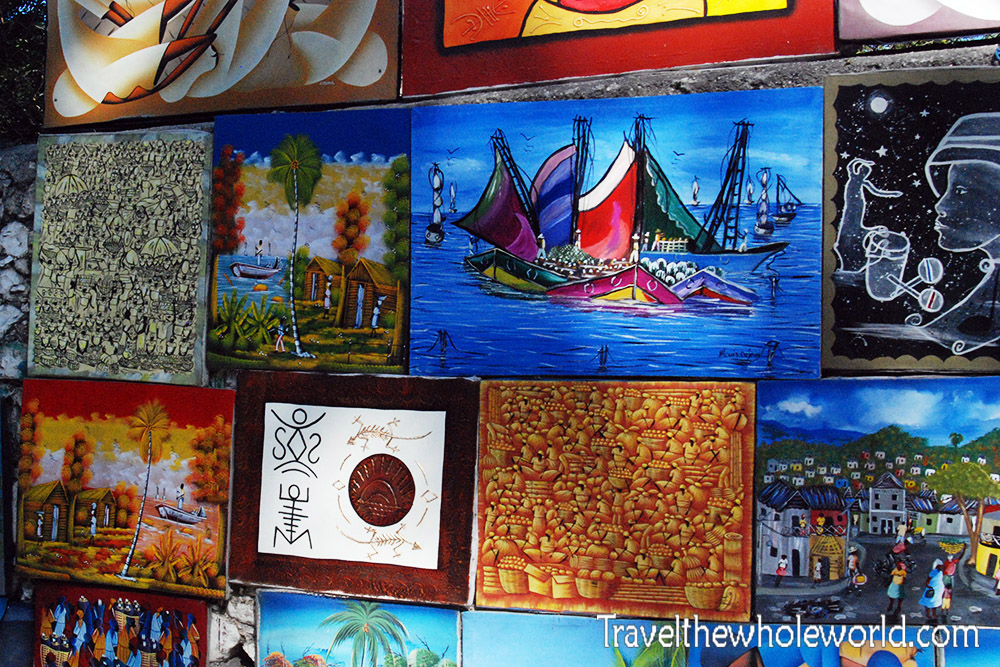