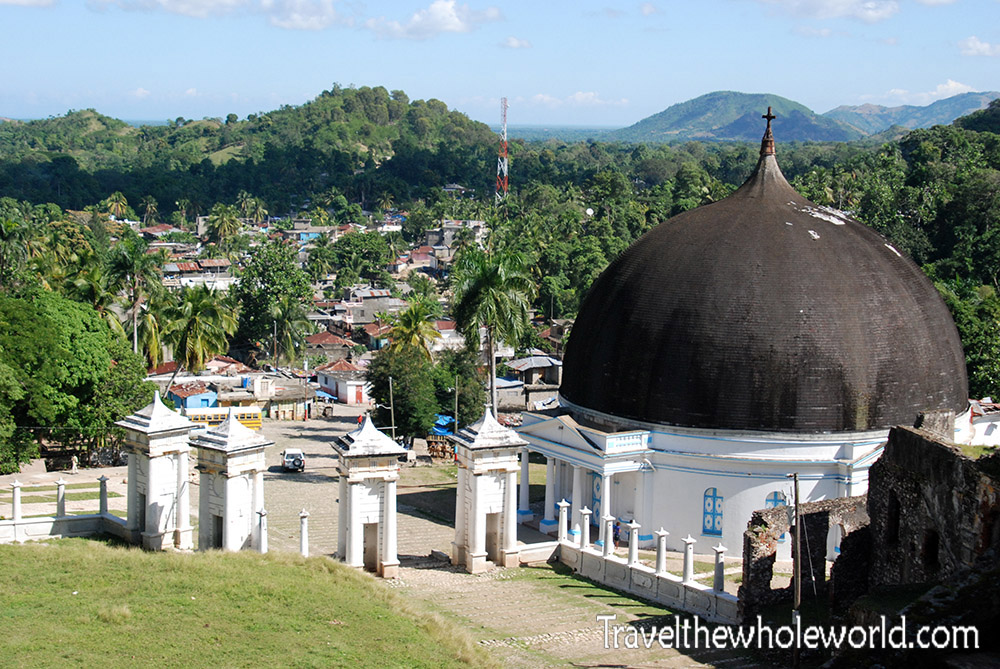 An hour east of Cap Haitien, you will find one of Haiti’s most interesting and important places. In modern times this small village with a beautiful church seems like nothing more than a little charming town. But going back in time two centuries; this was the home of one of Haiti’s first leaders. Although I didn’t see any other travelers here, the people appeared well accustomed to visitors (be prepared for a brief bombardment of souvenir sellers after your arrival and before your departure). If you can survive the bombardment and make it to the trail, then you’re free to do all the exploring you want without anymore hassle. The locals don’t mind your presence or your camera; unlike the crazy crowd back in Cap Haitien. 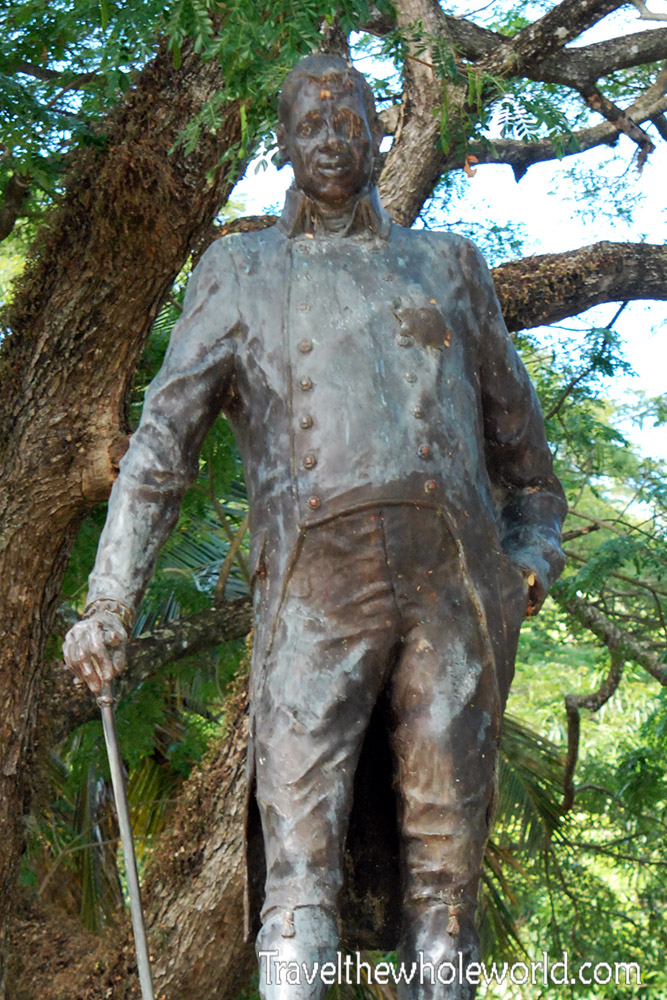 In 1807 after the assassination of Haiti’s revolutionary hero, the nation found itself deeply divided. Haiti split into two countries. Henri Christophe took power in the north and proclaiming to be “King of Haiti”. Henri Christophe earned a reputation for his brutality and cruelness, but his statue still stands proudly in the village of Milot. 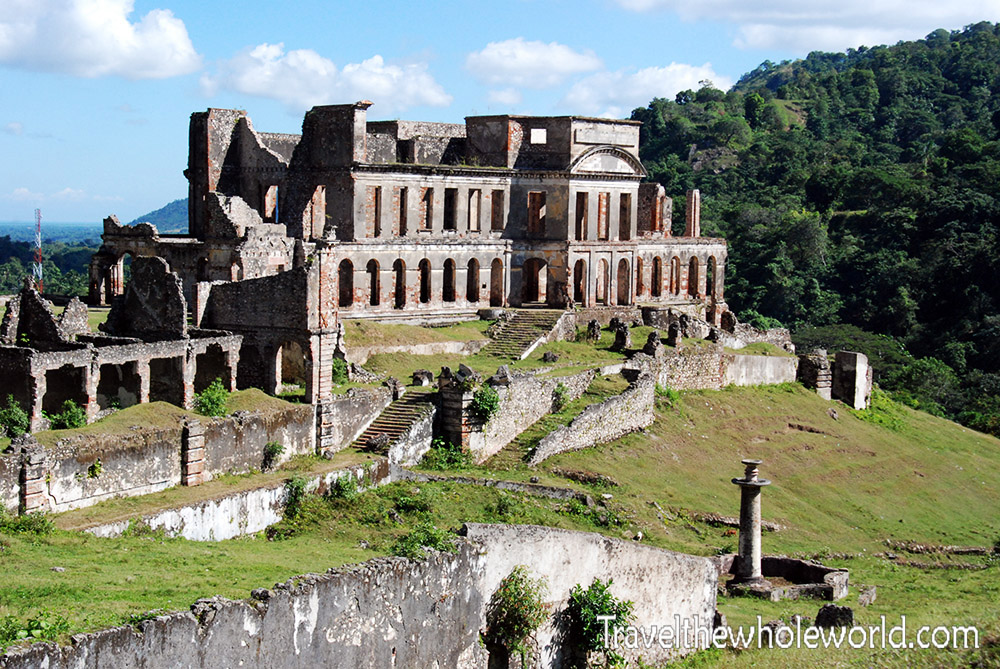 After a short hike past the church and his statue, you can find Henri Christophe’s enormous palace known as Sans-Souci. Considered to be the Palace of Versailles of the Caribbean, you can imagine the pride and the sense of accomplishment when this construction was finished in 1813. Unfortunately Sans-Souci lived just 30 short years until it was destroyed in a major earthquake. After its destruction there was no attempt to rebuild it, and ever since that fateful day on May 7th 1842, the palace lay in ruins. Above is the main palace structure, and below is a famous bust and icon of Christophe’s legacy that has survived the elements for over 150 years. 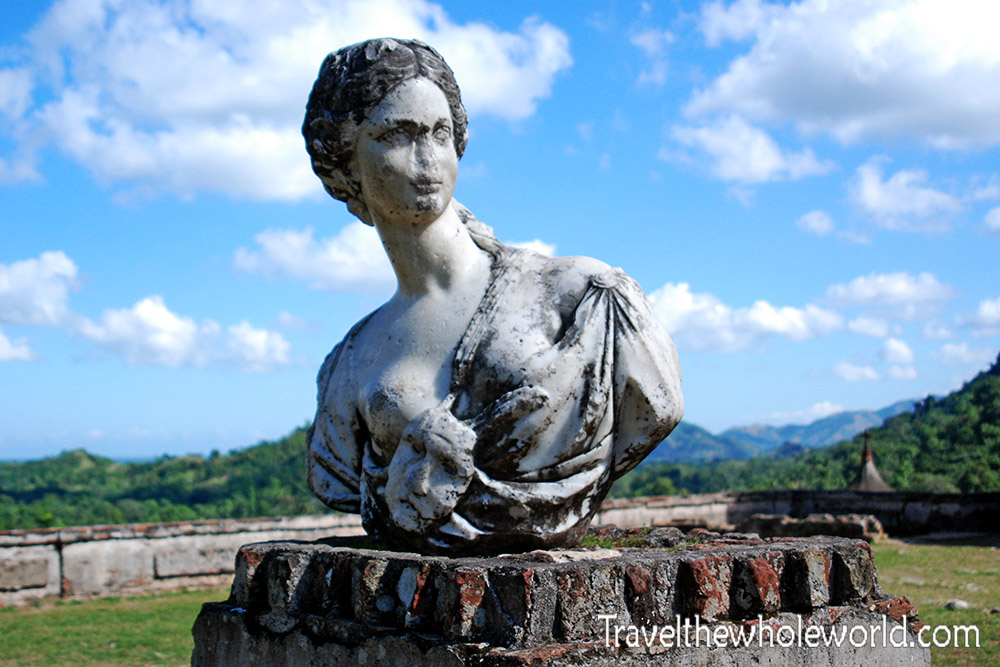 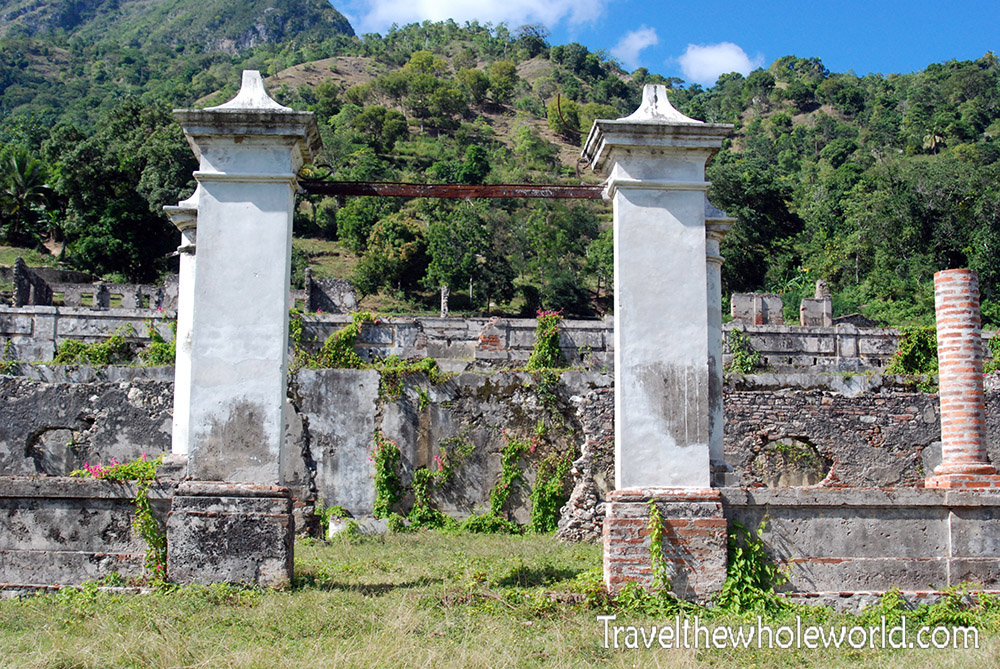 These next few photos are from other parts of Sans Souci. While Sans Souci was by far Christophe’s greatest palace, it was actually only one of nine palaces and several forts he had constructed. With no one but myself wandering through the ruins, I wasn’t sure what each of the structures here were once used for. The photo above looks to be the entrance to an important building that wasn’t part of the main palace. I assume it could have been a guest house or a place for those that were in CHristophe’s close circle. 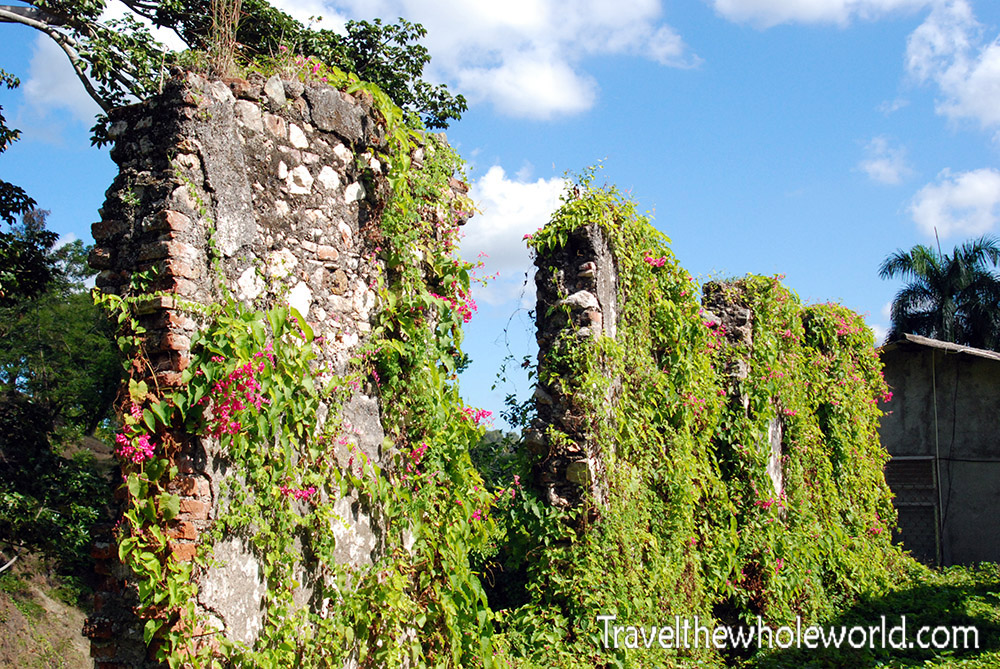 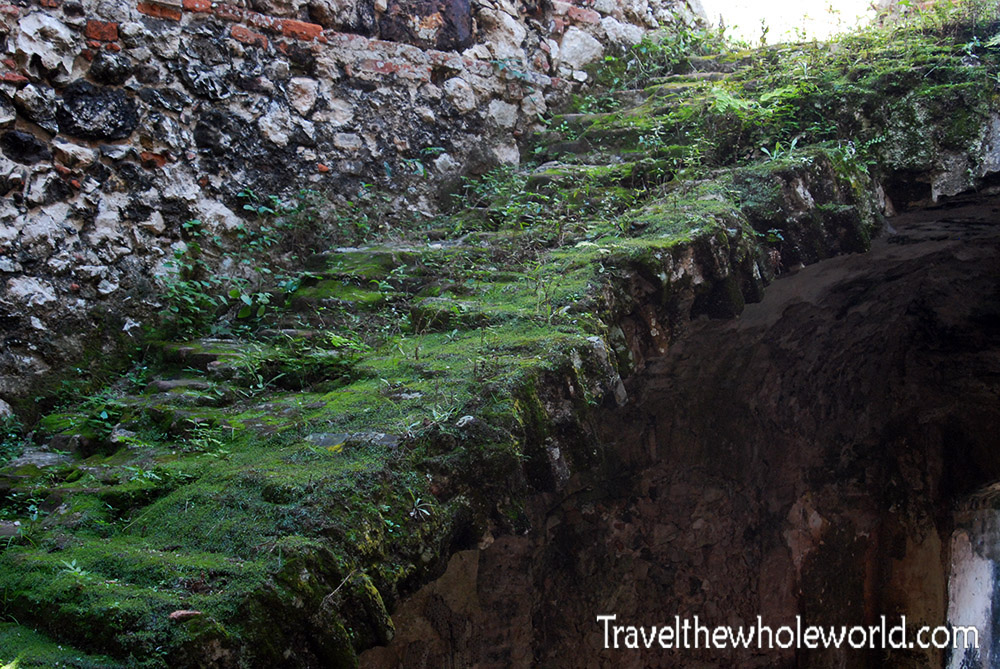 In one of the buildings I contemplated climbing these sketchy looking stairs to the second floor. In the end I didn’t trust the remains of Sans-Souci, and also didn’t wanted to be responsible for helping this world heritage site further crumble! Below are some lone walls that are still standing after a century and a half. When I visited the palace it was quiet and peaceful with the only noise coming from birds and insects. I can only imagine what this place was once like over 150 years ago; Haitian king in a bran new nation surrounded by armed guards and hundreds of people. 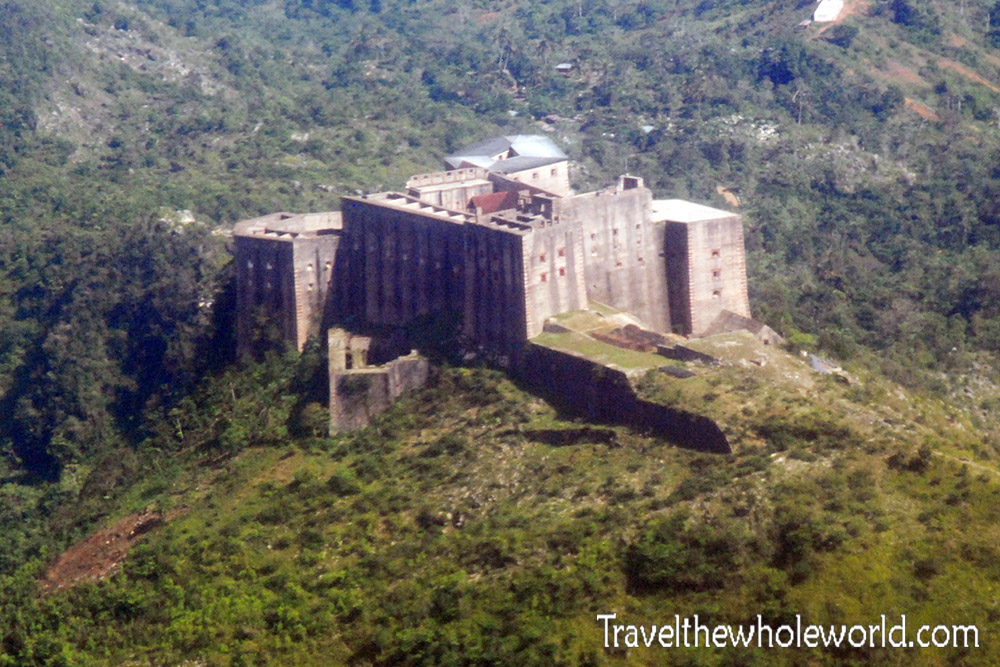 Despite the accomplishment of Sans Souci, it’s not Henri Christophe’s greatest architectural achievement. Instead, that title goes to the fortress known as the Citadelle Laferrière which is another world heritage site. After Haiti’s successful slave rebellion, Henri Christophe feared that the French would regroup and one day return to invade Haiti. Ironically, the Haitian King forced 20,000 newly freed slaves to work with little or no pay to build the citadel. Some died while working under the harsh conditions, and in some ways Henri Christophe had enslaved his own people which made him an unpopular leader. Ever since its completion, Citadelle Laferrière became the largest fortress in the entire western hemisphere. 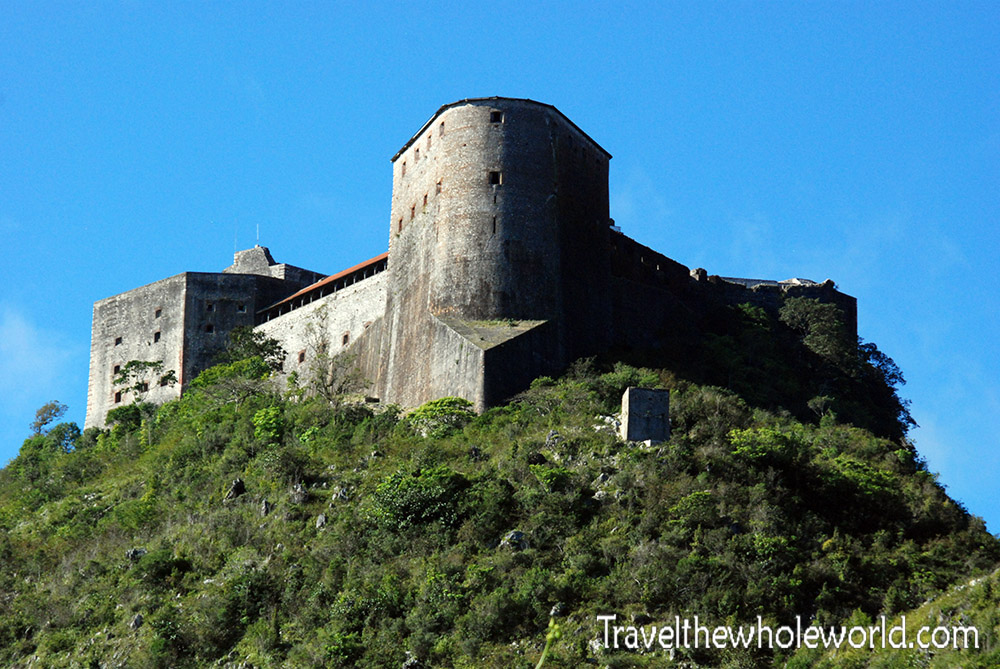 The first photo I had of the citadel was actually taken from an airplane as I flew to Cap Haitien. It’s impossible to get such a view on the ground; the photo above was the best I could get from the trail! Aware of the people who gave up their lives to build the castle, I had mixed feelings of this place. Regardless though, the castle is an incredible achievement for Haiti, and its physical presence is undeniably amazing. Built 3,000 feet (1,000 meters) up in the mountains, the castle dominates Haiti’s northern coast. The only way to reach the castle is by a long 4×4 drive up a trail followed by a four mile (seven kilometers) hike. 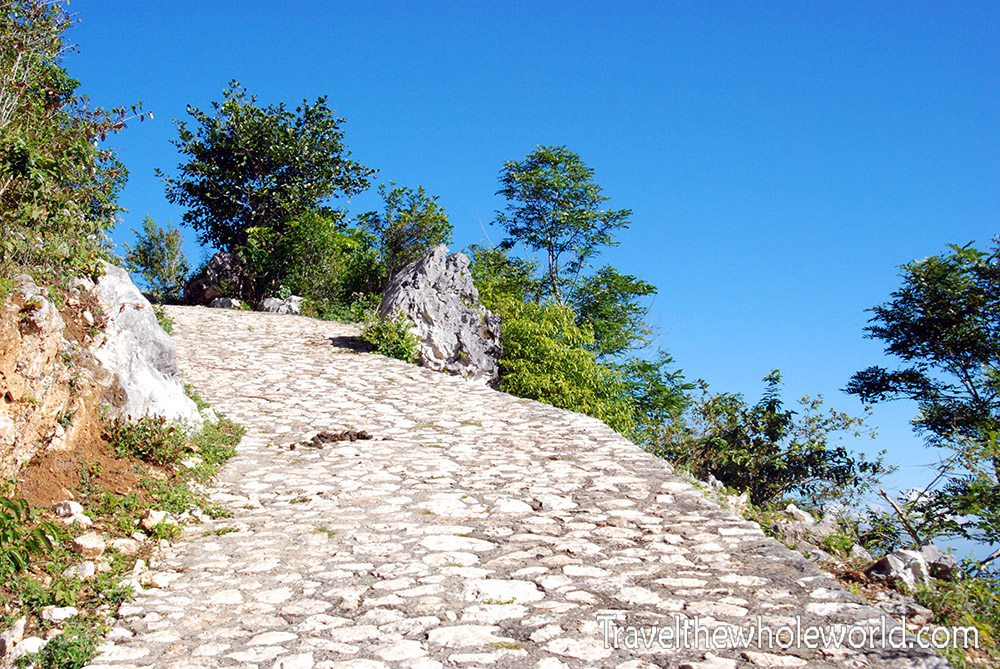 While you might not get amazing views of the castle from the awkward angles below, the hike up the trail is still an experience itself. For those who want to avoid hiking, you’ll have no problem finding villagers offering their horses and donkeys to take you up to the castle. Above is a photograph of the path leading to the citadel, while below you can see a lone guard house that I passed by on the way. 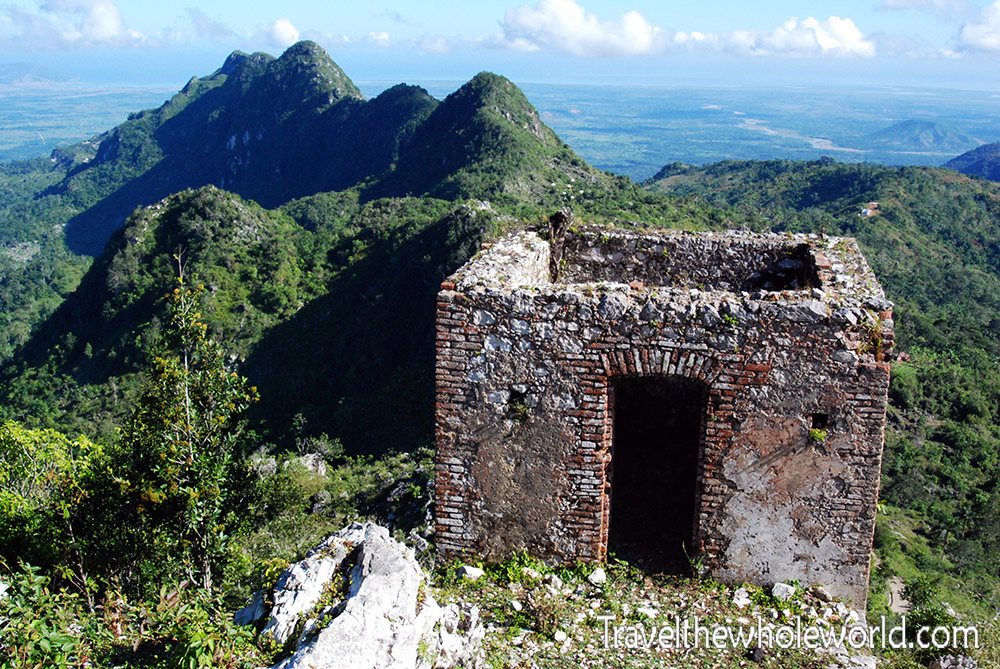 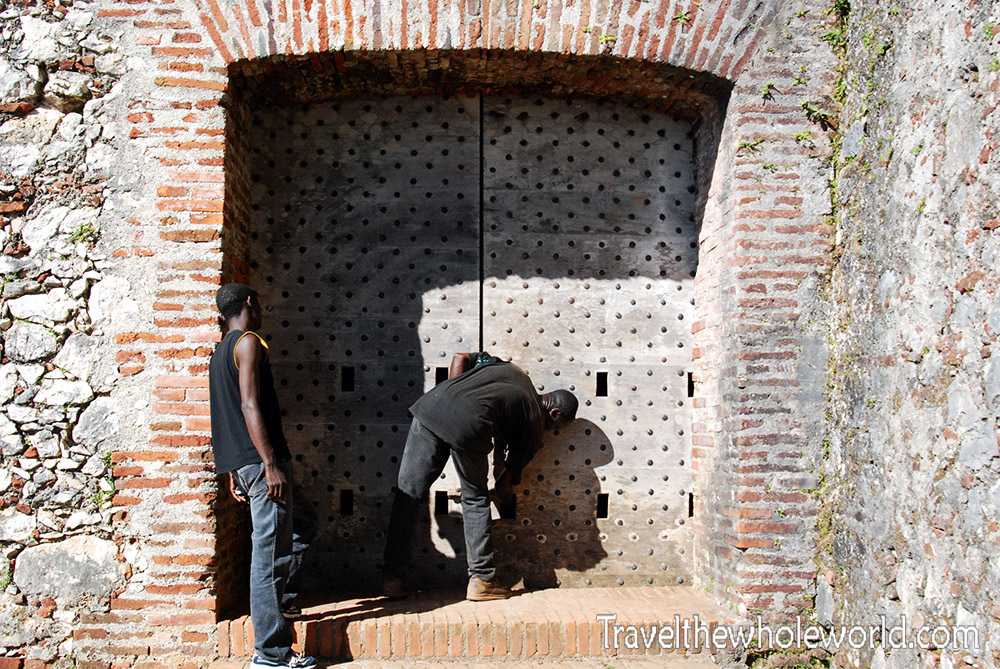 After the hike to the citadel, I found a man sleeping outside iwho had the key to the castle. He asked for a small donation and then opened the door for me. The door that is installed now is a modern one, but as soon as you enter the castle you’ll probably nearly stumble on the original which is laying on the floor. 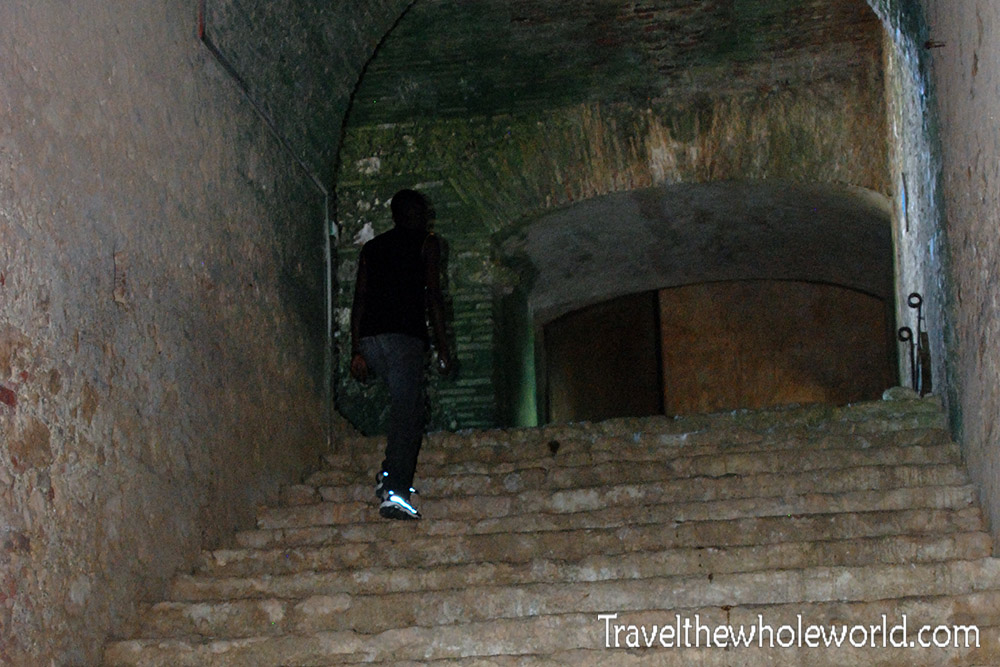 Inside the castle it was so dark that I had to wait for my eyes to adjust before I could explore a bit. Even then, I was still somewhat worried I’d run into something. While going up a flight of stairs, I stopped and took this photograph above using my flash. After making another turn or too, I stepped outside back into daylight and found myself at the rear of the fortress. The guy on the stairs was a local who offered to be my guide for only $70! I warned him I wasn’t going to be paying him, but of course he still came. 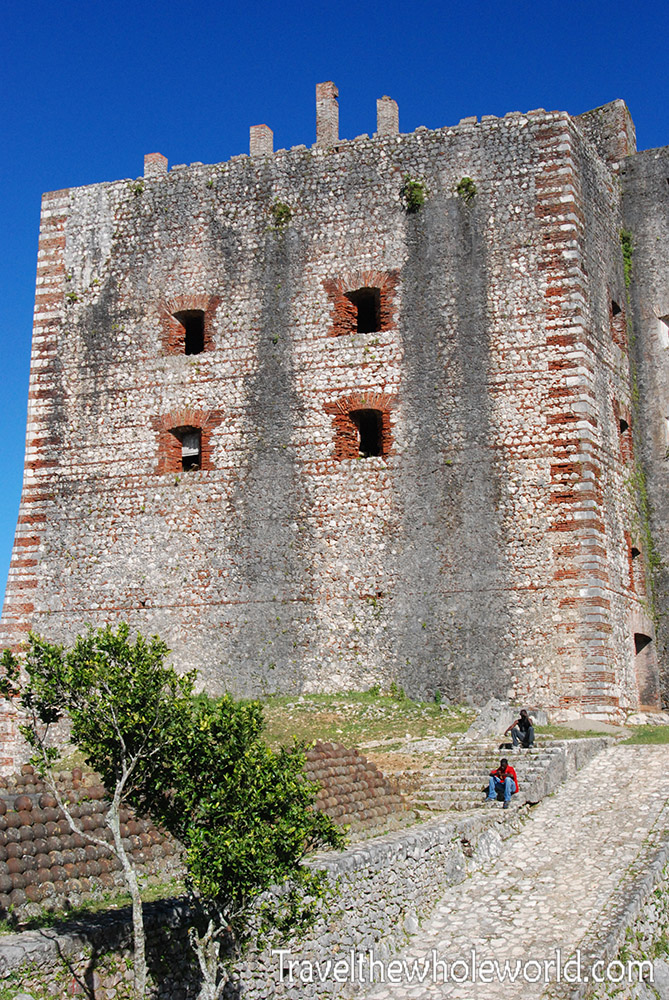 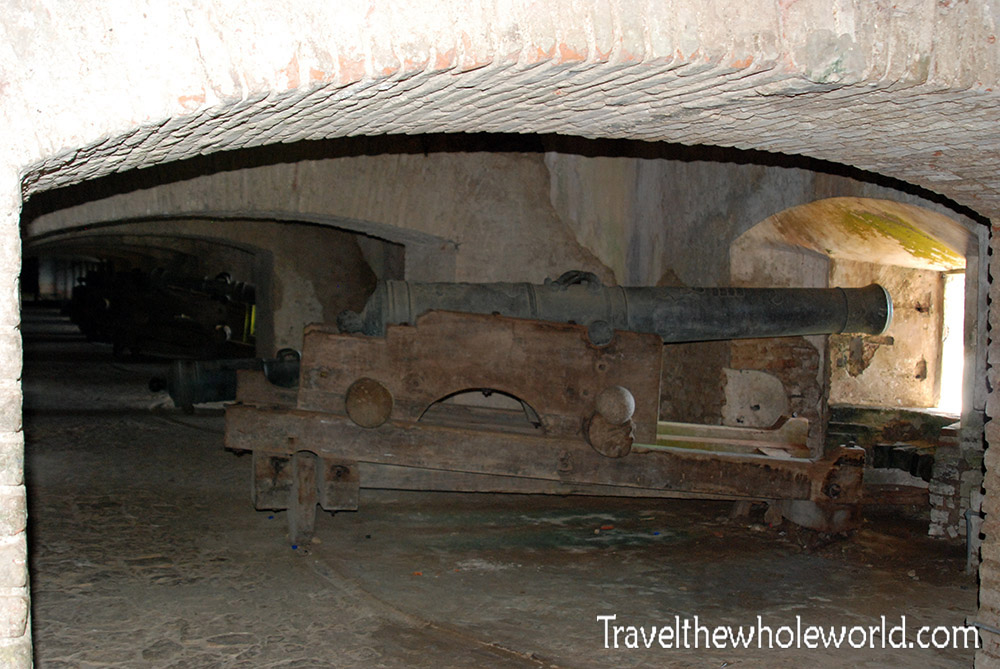 The interior parts of the castle are as impressive as the exterior. Above are cannons lined up along the windows of the citadel which had been prepared to fire on French troops. The Haitian Revolution resulted in tens of thousands of deaths for French citizens and soldiers. This enormous loss was enough to change Napoleon’s mind about further colonizing the new world. Not only did Napoleon decide to give up on France’s most important colony, but he gave up on the entire New World after selling France’s territory to the United States with the Louisiana purchase. So in a way, cities in the American south such as New Orleans are now part of the United States thanks to Haiti! 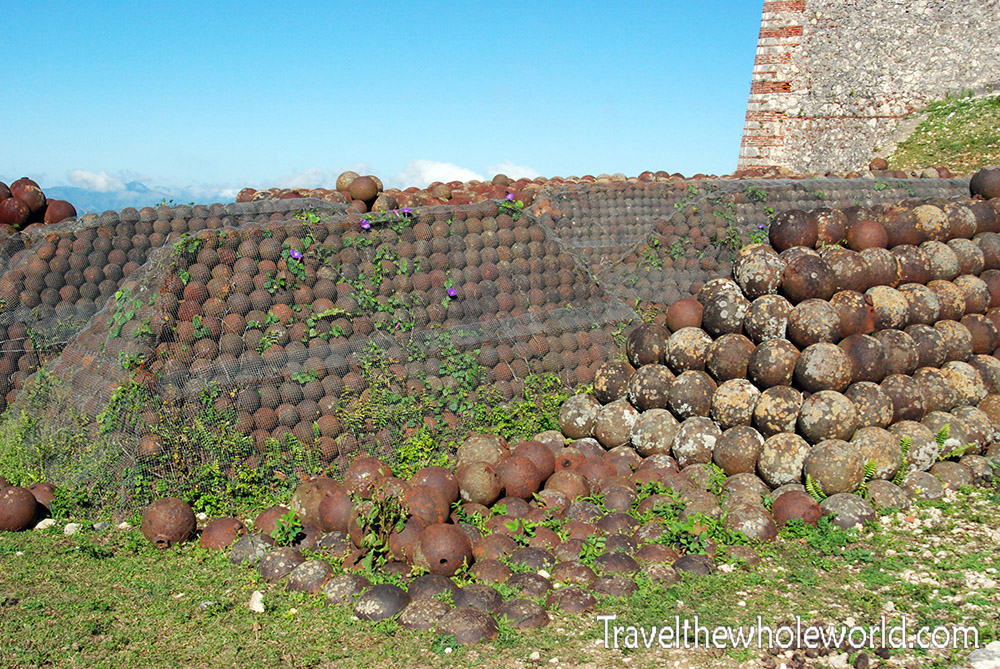 While France never attempted to take back Haiti, you can see from the large amount of cannonball stockpiles that the Haitians were doing their best to prepare for a long drawn out battle. The Citadel was completed for some serious fighting, but never saw any war. 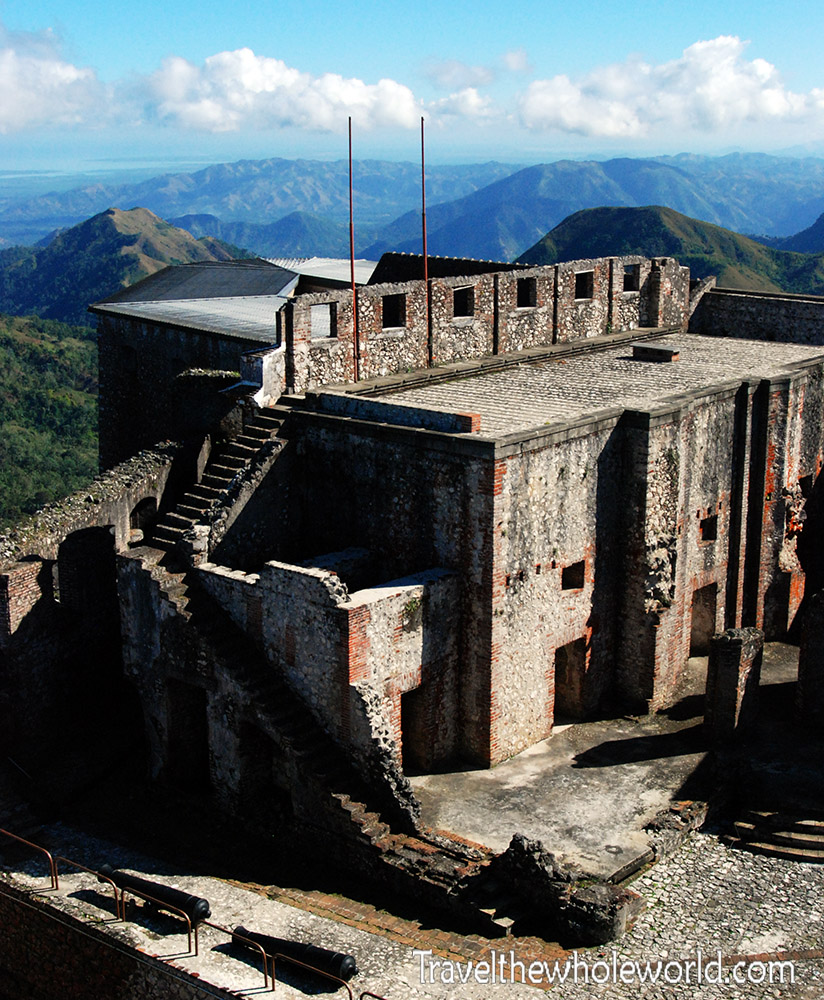 There appeared to be no rules or supervision in the citadel, but new guard rails installed along exposed walls provided some fall protection, so it looks like some effort is coming along. If you take a walk along the roof where I took this photo above however, you’ll find yourself peering over sheer wall down to the valley below. Anyone who falls here is a goner, but the views made it worth it. 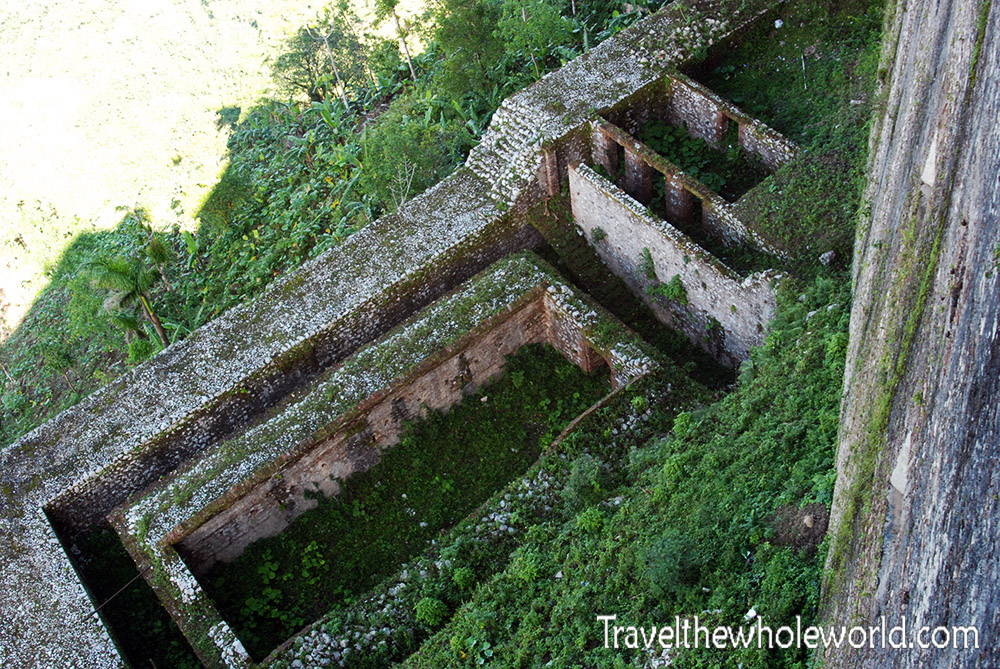 This photo was also taken from the roof, and is a part of the castle that has been unexplored for some time. Apparently there is no easy way to get to it, but naturally that made me want to go more. My unofficial guide/stalker told me the door had been blocked off for decades. I guess that leaves scaling the wall from the outside or rappelling a few dozen feet into the barren parts of the castle as the only ways to get in! 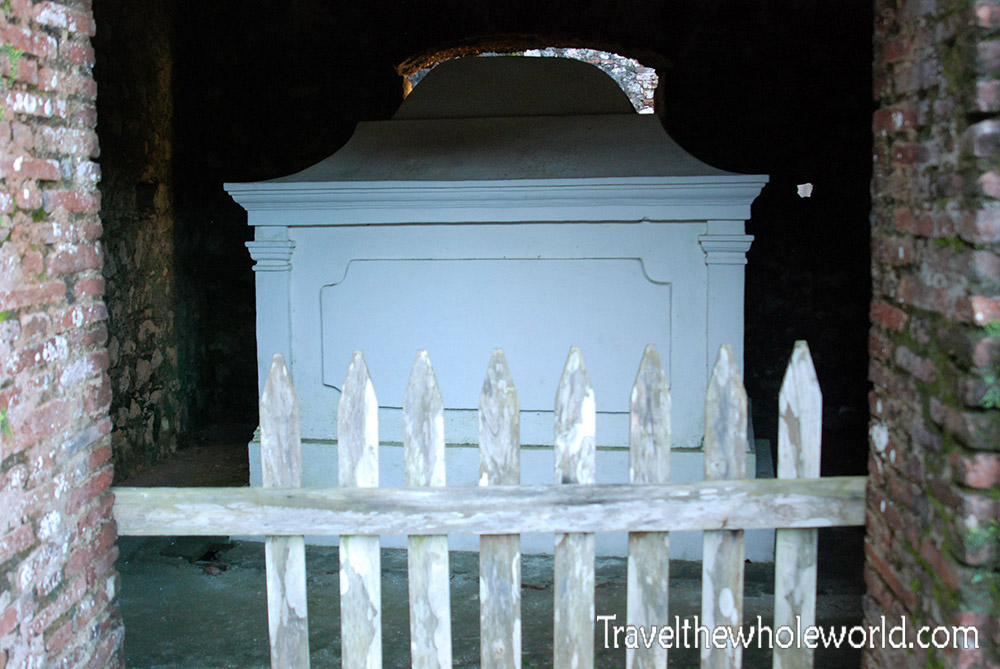 As I said before, the French never attempted to retake Haiti and the island was left to its own domestic problems. With Henri Christophe’s harsh rule and forced labor, his reputation continued to decline. Some even went as far as to say he had committed genocide due to scores of Dominicans he had killed and taken prisoner. Some Haitians of the north began to view their King as a cruel leader, and eventually Henri Christophe became paranoid of a coup or assassination. His fear of being overthrown grew so great that he shot himself with a silver bullet. Only 10 days after his death, his son and successor was assassinated ending the reign of the Christophes’. The gun he used to commit suicide is on display in the Port Au Prince museum of history. Above the tomb of Christophe, buried within the Citadelle Laferrière. 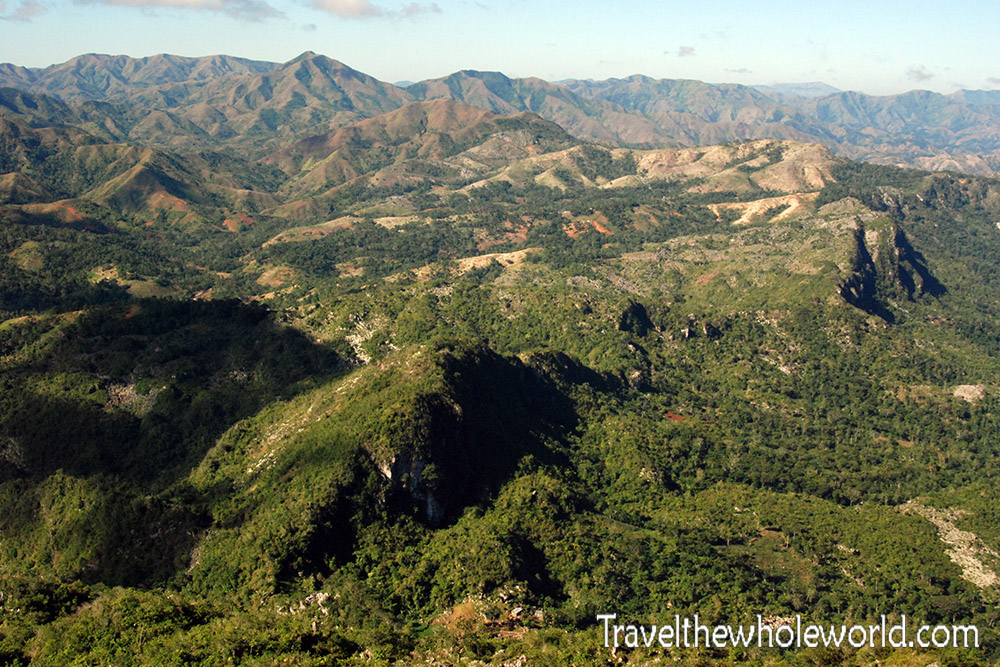