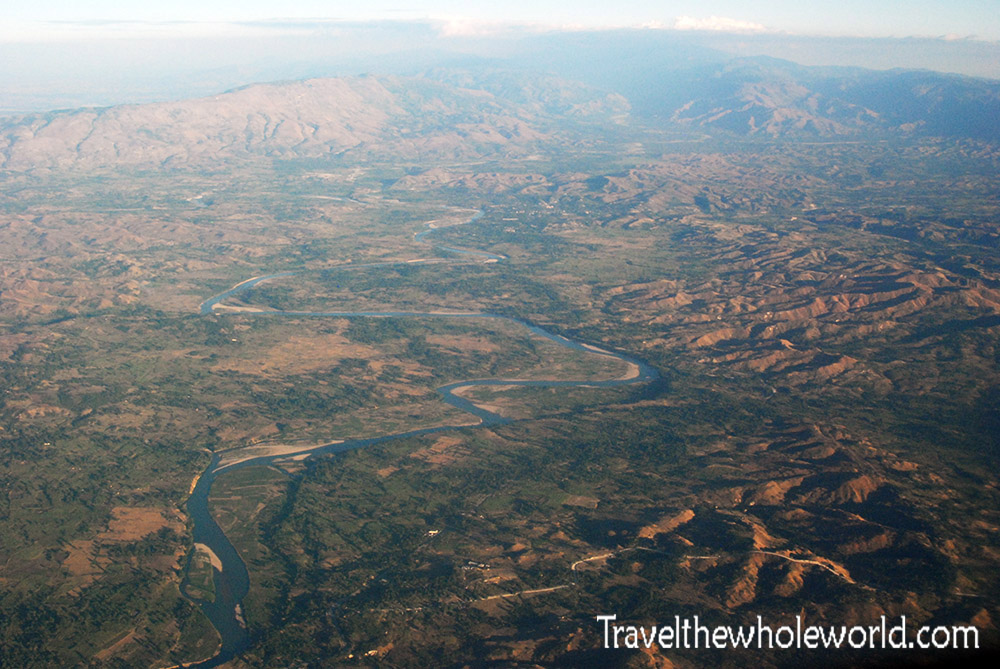 Although Haiti is a small country, traveling by road from one city to another can be a time consuming process due to all the windy mountainous roads and lack of infrastructure. When I wanted to visit Cap Haitien I actually took a short flight from Port Au Prince rather than risk losing a full day on the road. Haiti is known for its environmental losses where the woodlands have been devastated. I was able to witness this first hand as I spent my flight looking over the treeless mountains. Somehow rumors that only two percent of Haiti remains forested had become widely accepted. I later found this to be completely false. While it’s true that Haiti has experienced lots of deforestation, a recent study proved that as much as 30% of the country is still covered in woodland! 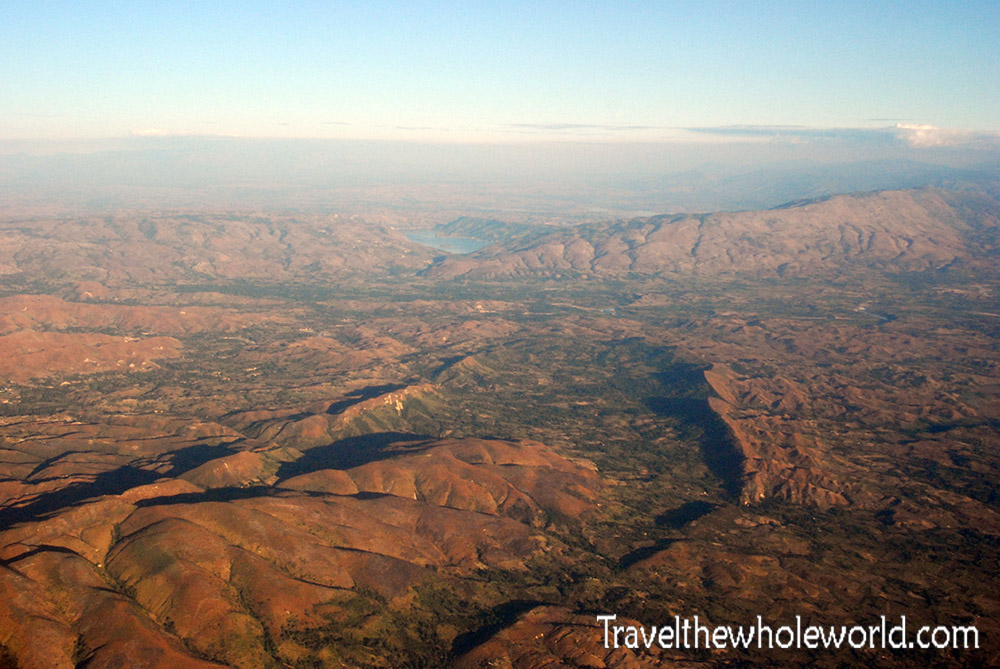 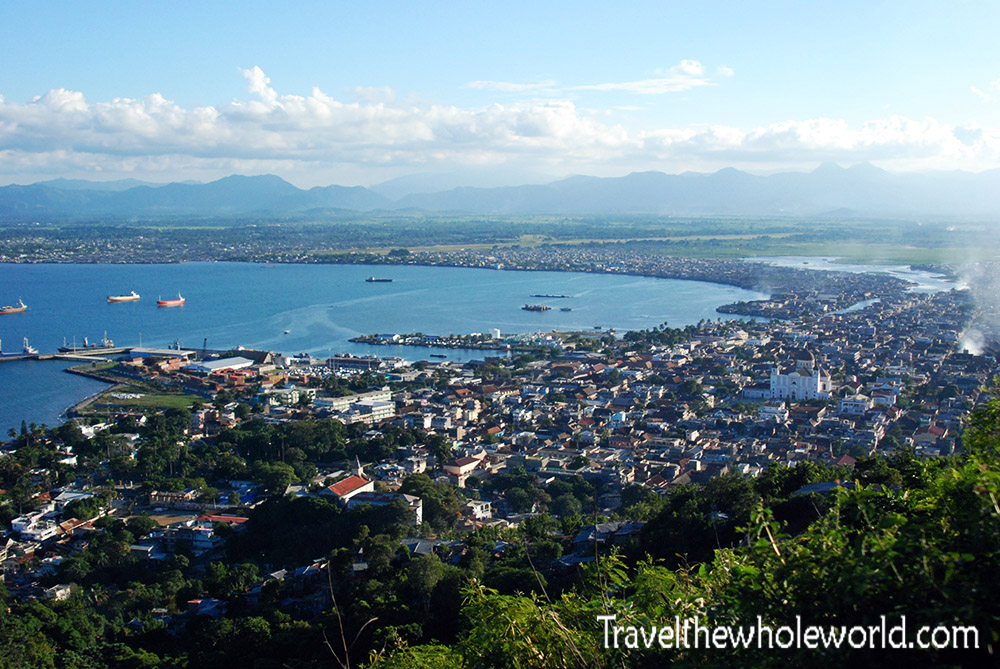 My favorite city in Haiti that I visited was Cap Haitien, located on the northern coast. Cap Haitien is the country’s second largest city and one of the most scenic places in the Caribbean. Although I loved the city, this somehow turned out to be more of an outdoor adventure! I found some random trails in the mountains and ended up trying to explore them on my own. During one of my hikes through some thick vegetation, I nearly ran into an older man carrying a machete. He seemed almost as surprised as I was and gave me a kind smile and went about his way. Eventually I was rewarded with this vantage point where I could see Cap Haitien from above. In the photo below, you can see some of the smaller houses in the outskirts of Cap Haitien.. 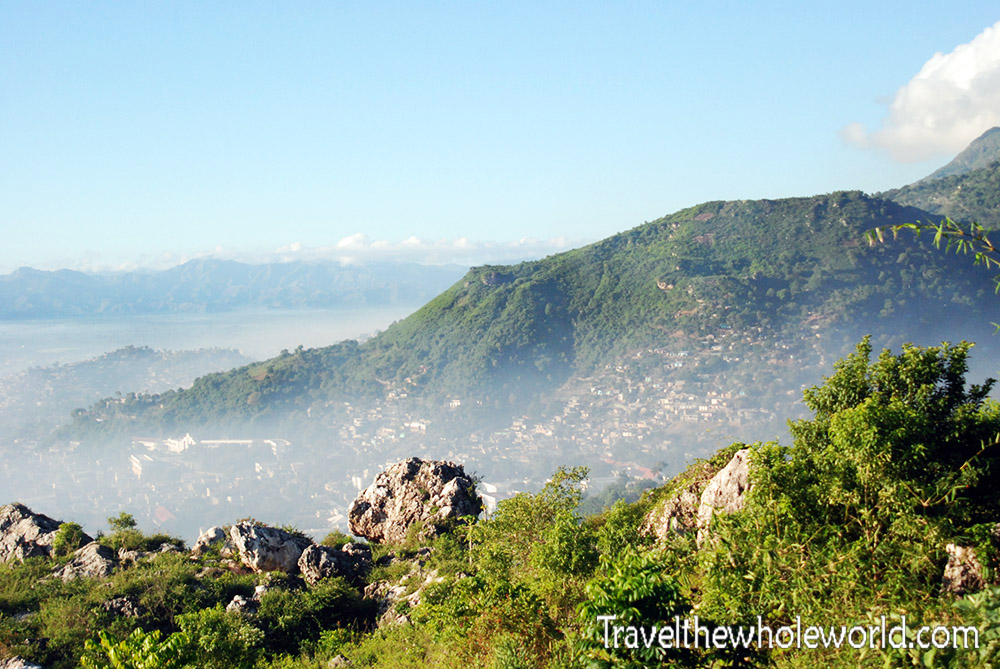 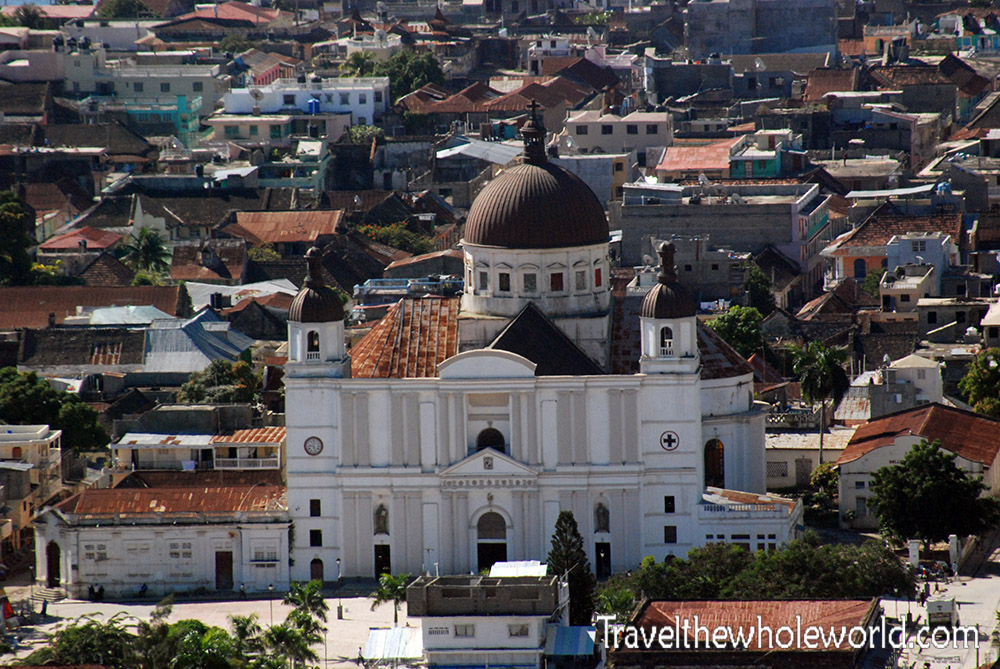 One major failure I made on this trip was not going inside this church, formally called Our Lady of the Assumption Cathedral. The cathedral dates way back to 1670, and has seen Haiti go from a slave nation, to a rebellion, to the free country it is today. As a matter of fact, right in front of the cathedral on August 29th of 1793 was when slaves were formally declared to be free! 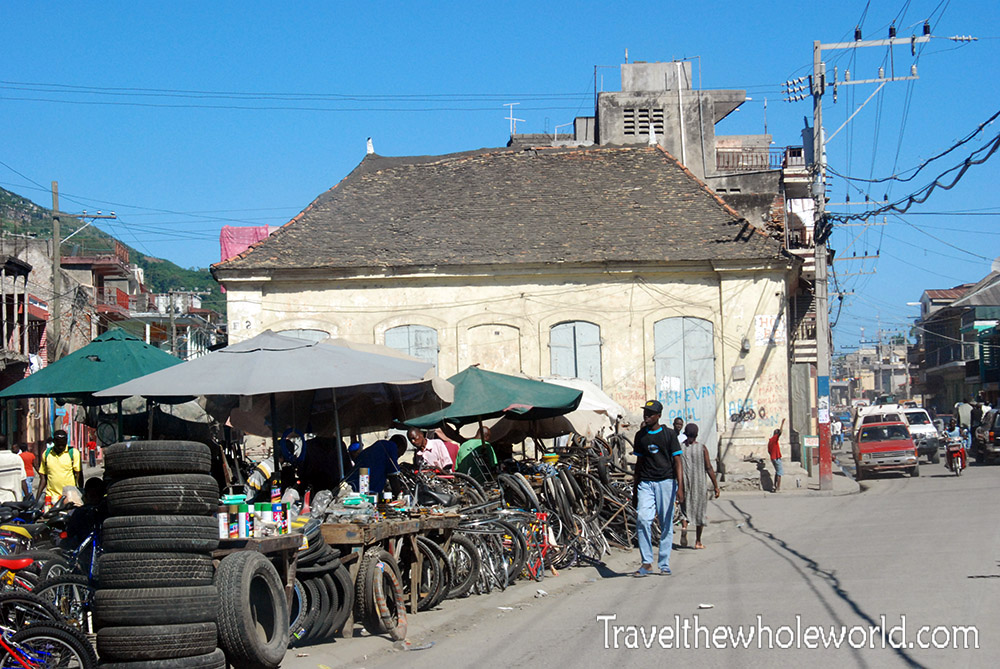 As I walked around other parts of the city, I saw that like Port Au Prince Cap Haitien had some very crowded streets. Like the capital, I came across overly packed tap-taps, people walking down the streets along with traffic, and plenty of busy markets. One place that caught my attention was this bike shop. 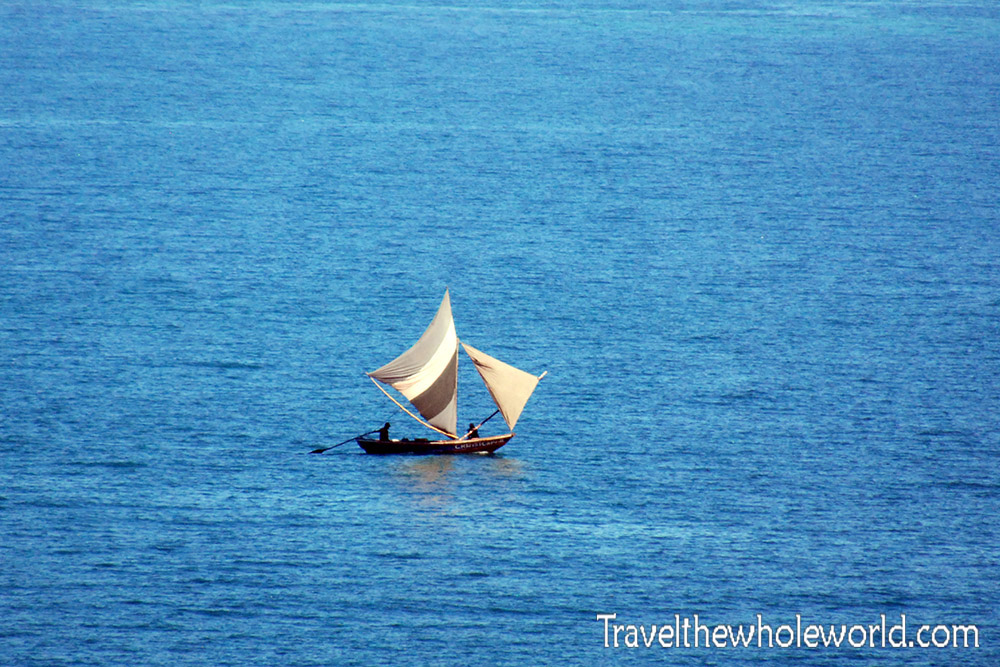 Cap Haitien is holds one of Haiti’s largest seaports. You’ll find many large cargo ships anchored in its harbor as well as more humble sailing ships like the one off its coast. Haitians have earned a great reputation when it comes to building small sailing and fishing boats. There was probably about a dozen tiny sailing ships such as the one above in the bay I had visited. 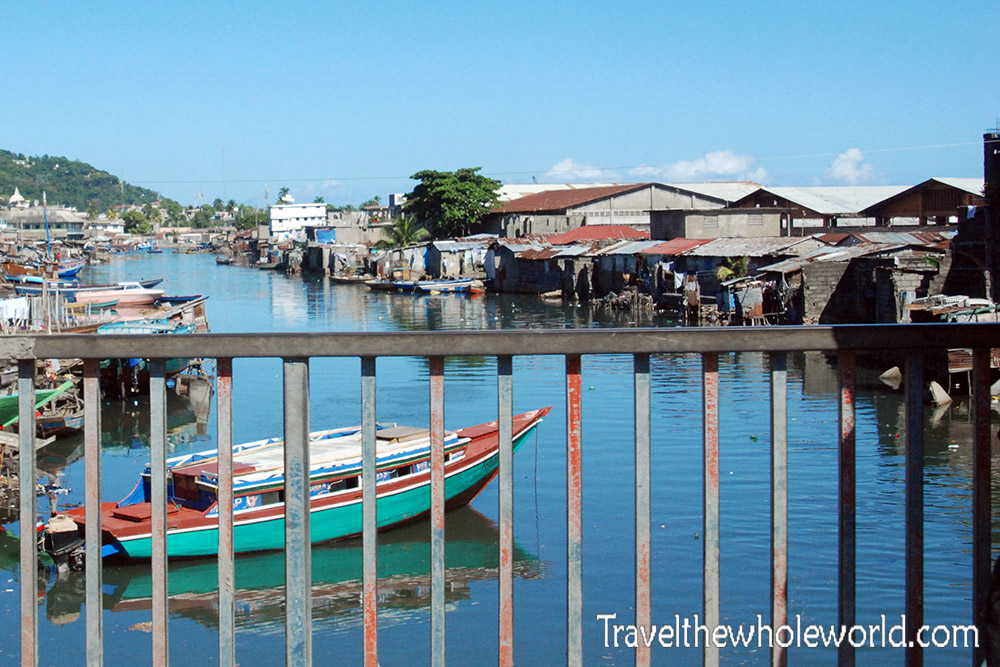 Cap Haitien also as a river that seems to run straight through the city center that is used by smaller boats. I imagine if Haiti was ever developed this area could be one of the nicest parts of the country! This bridge was always packed with people and traffic, but it was still one of my favorite parts of the city. 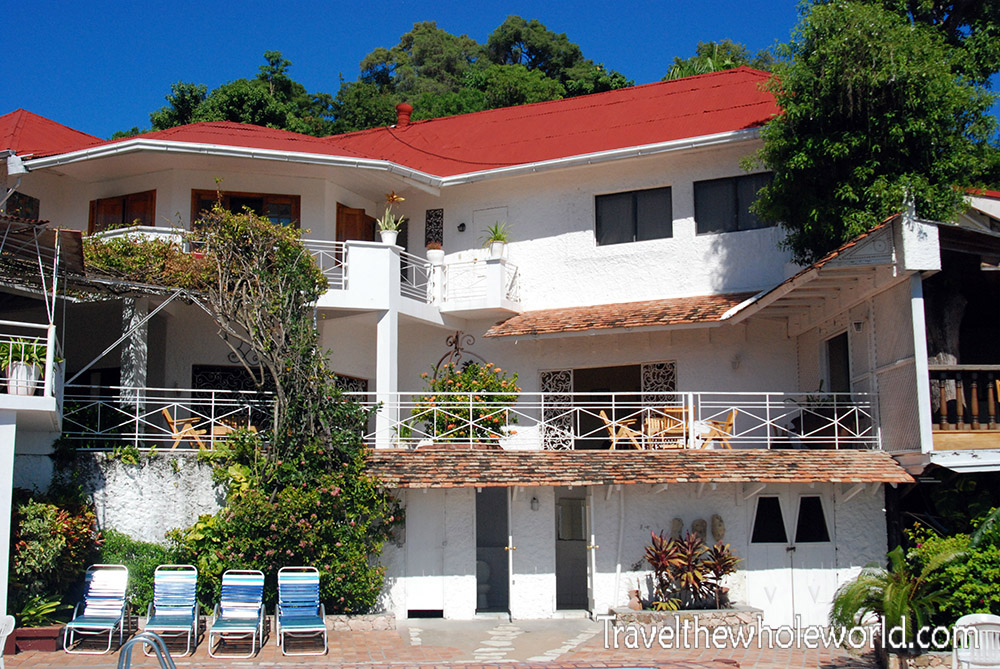 While I stayed in Cap Haitien, I spent my nights at this beautiful hotel. Sadly I was the only guest here, while the hotel had severe shortages of supplies. Without exaggeration, I’d say that more than half of the things I tried to order on the menu weren’t available, but it wasn’t nearly as bad as my experience in Petionville. I even had an experience of going to several gas stations to have them tell us they were sold out and there had been a gas shortage for two days! 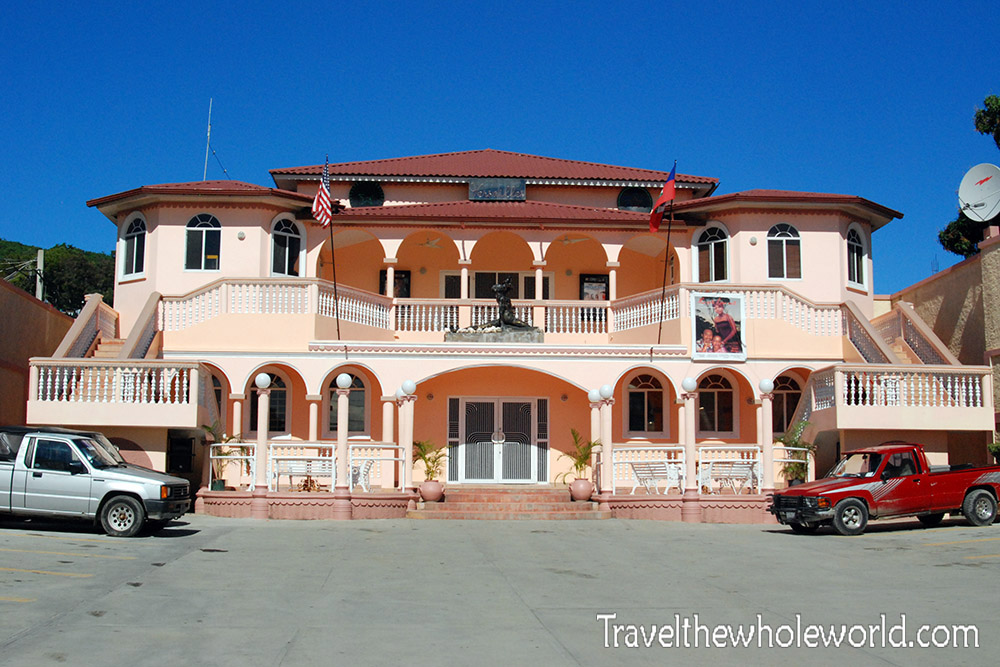 One thing they did have was this beautiful building, which I was told by a local that it was a theater. I found it strange to see such a nice place in downtown Cap Haitien, and because it was gated and flew both the American and Haitian flag I have about zero confidence it’s a theater. After I stepped back from taking that photo I found myself surrounded by about five or six Haitian guys, one of them wide-eyed getting only inches from my face. A woman walking by kept her head down but yelled photo! photo! to them. I believe she was trying to reduce the tension from the situation by saying all I was doing was taking a picture. The guys stared me down for a moment but then backed off and nothing happened. Not a big deal? Close call? I’ll never know. Immediately before that happened though I had come across a UN foot patrol from Uruguay that was still just around the corner. If things had escalated I might have been able to make it there or at least get their attention. 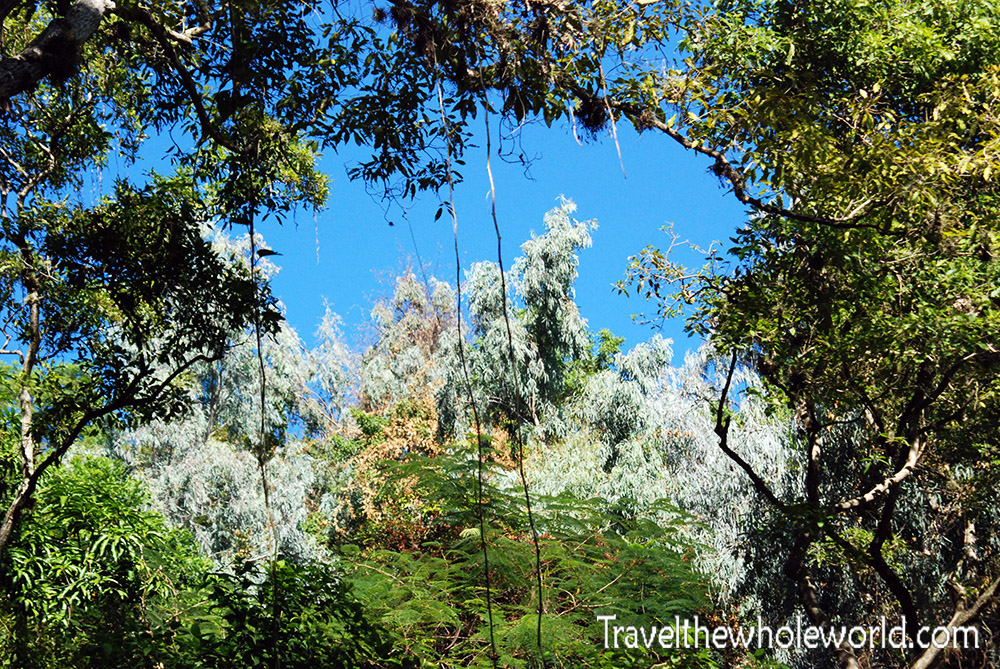 My remaining photos of Haiti are of the country’s natural beauty and some wildlife that I came across. As I mentioned earlier on this page, I actually did a lot of hiking in this area along small mountain trails that I discovered by my hotel. I was pretty surprised by some of the scenery here, especially being so close to the city. 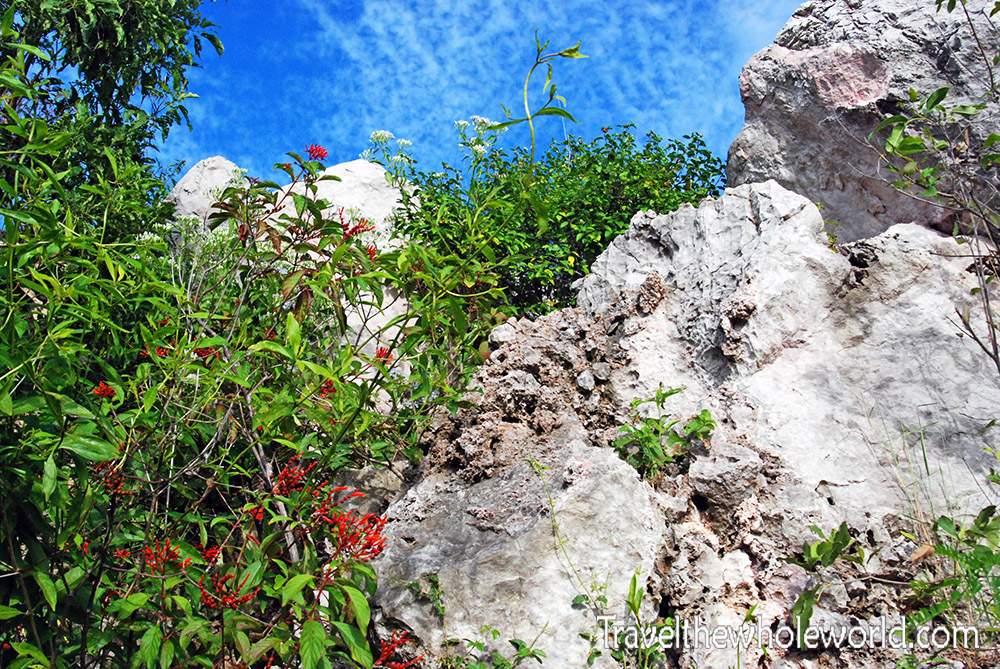 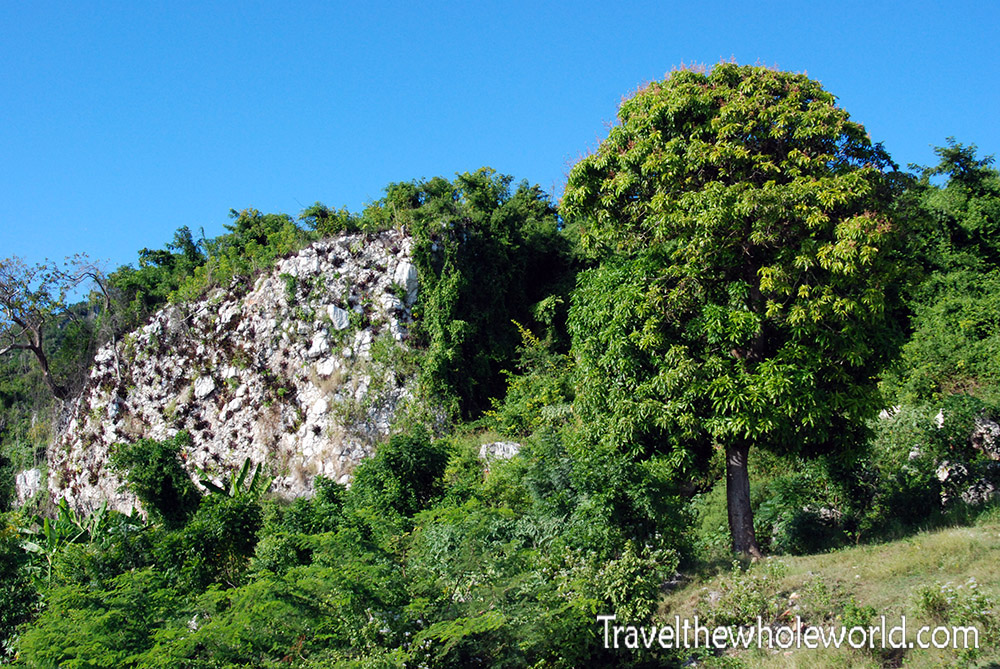 Without question, from my views from the plane I could see that lots of the mountains were treeless before I arrived to Cap Haitien, but this area looks to be getting some regrowth. I saw several medium sized trees here as well as colorful flowers like the one below. 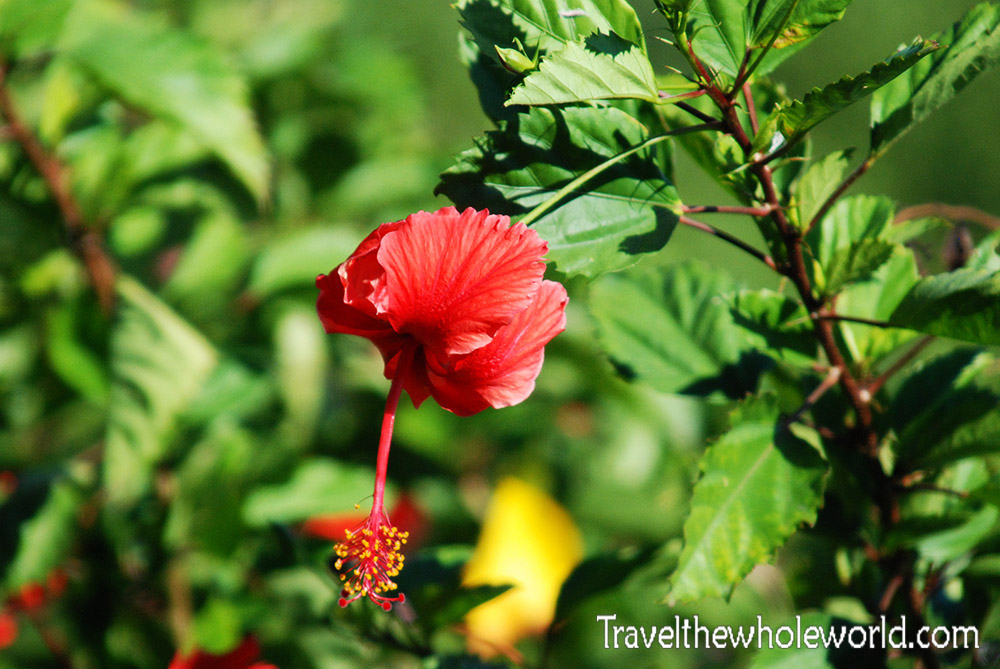 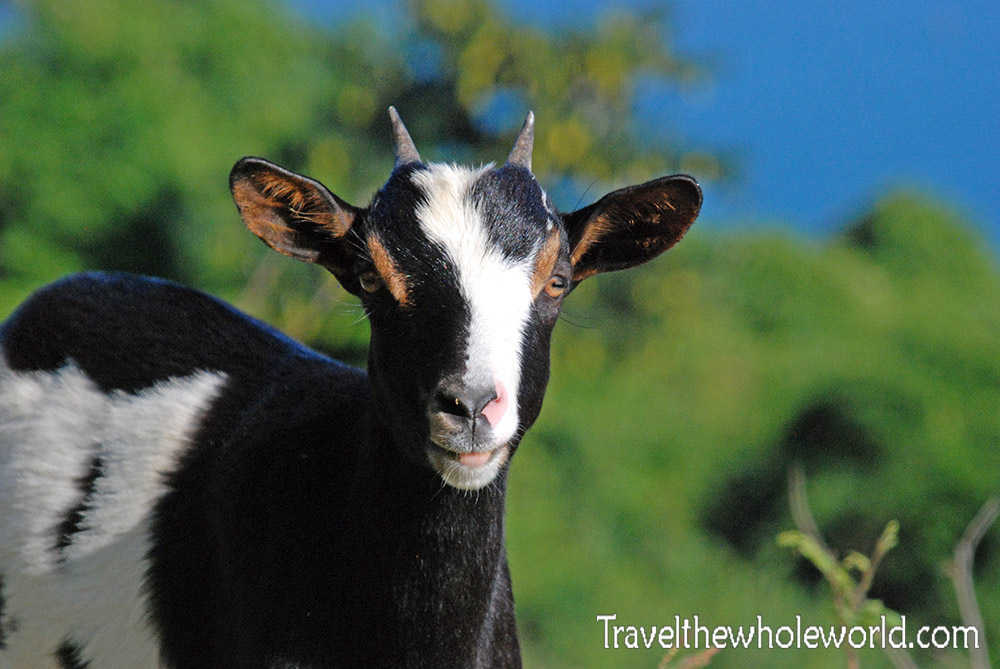 While hiking I came across about a dozen goats along the trail. I wondered if they were wild at one point, but they seemed indifferent to my presence even when I got relatively close. I noticed one had a broken leash dragging behind it, so they obviously belonged to someone rather than a feral population that ran off. To my knowledge there aren’t any large wild animals that still live in Haiti. Crocodiles are the only exception to large wildlife which can be found in Haiti’s mangrove swamps. 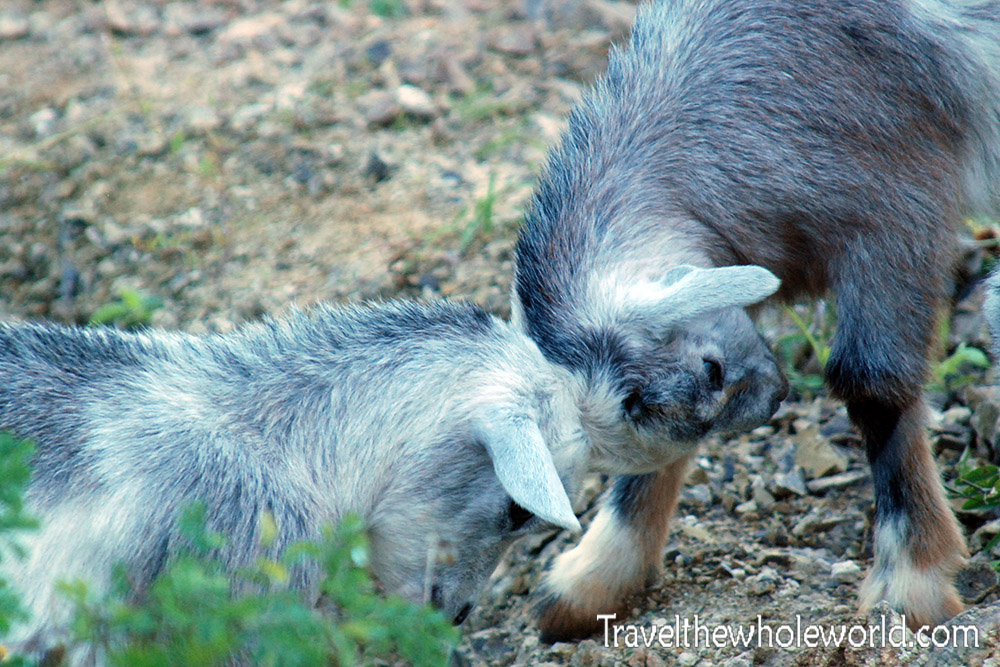 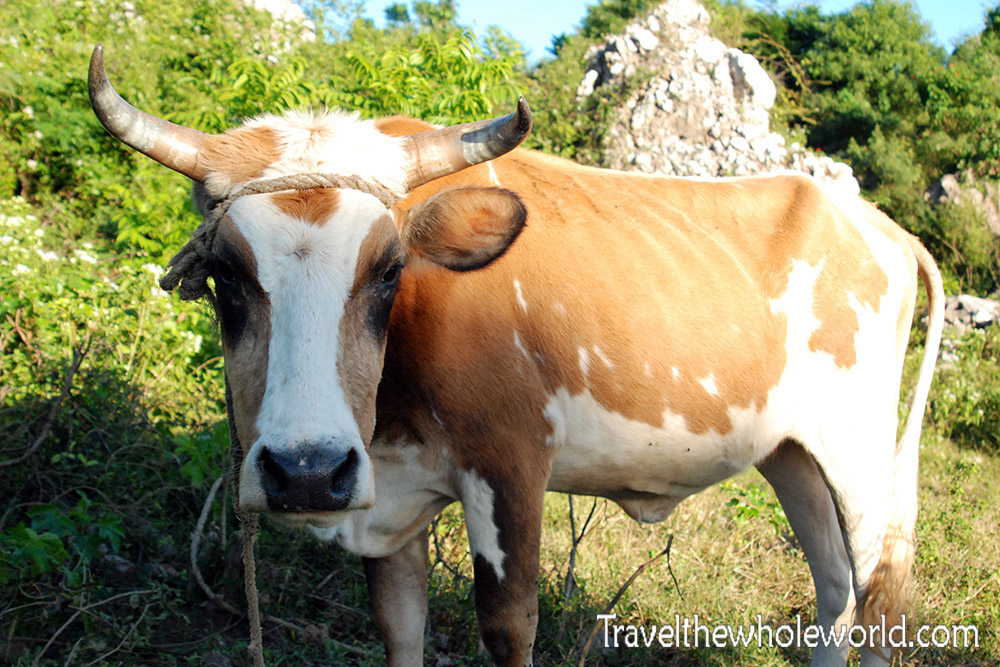 My trail went through some very challenging and dense terrain. Goats were expected in such conditions, but the bull? It seemed like it might have been more practical to drop him off by helicopter rather than to lead him through these mountains. Because the vegetation was so thick, I didn’t see the bull until I nearly ran right into him. Fortunately he was a nice bull and immediately walked up to me and humbly lowered his head. He honestly just seemed bored and was happy to have some brief company. 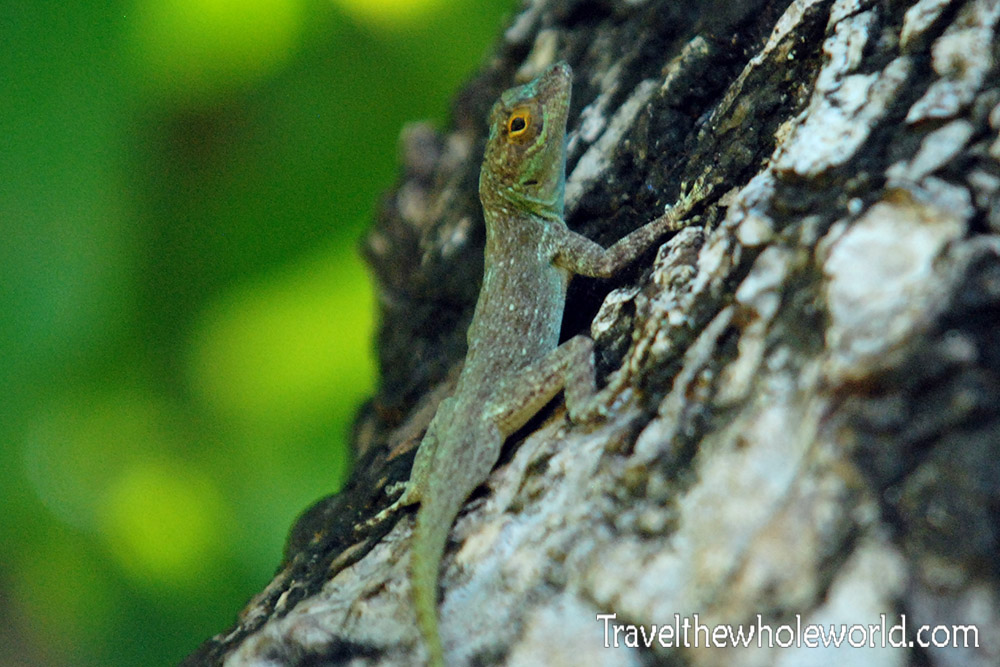 Two reptiles I came across are this lizard above and snake below. I’m not sure of which species they are, but I was told the snake is called a horse’s snake and that it was poisonous. After my trip to Haiti I spent some time looking on the internet, but wasn’t able to find a species of snake with that name. I did find an article that said Haiti does not have any poisonous species though, so this guy was harmless. Perhaps the horses snake is what it is called in the local language. 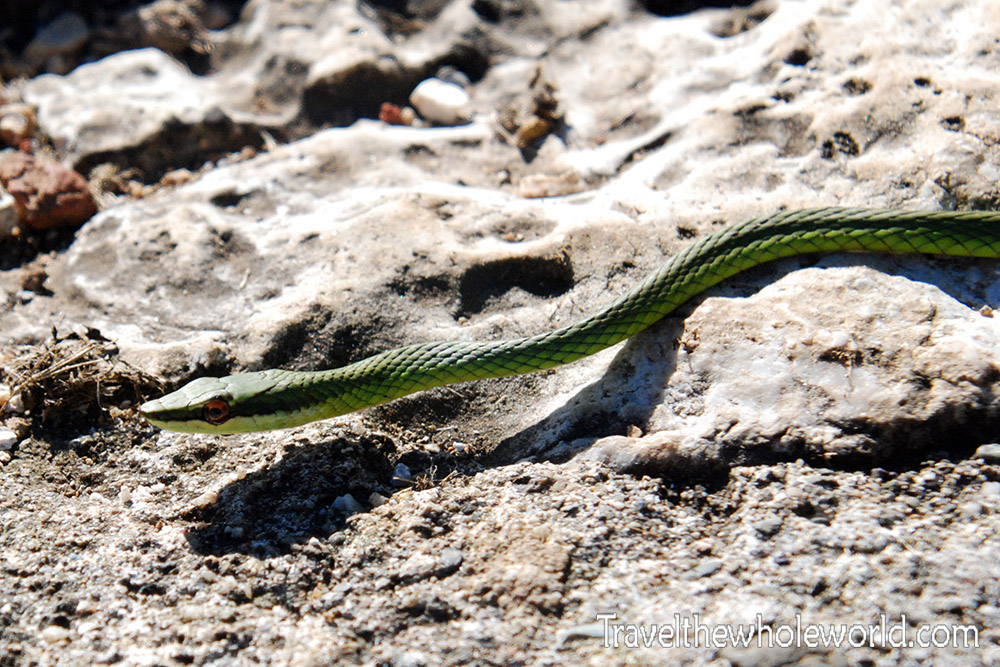 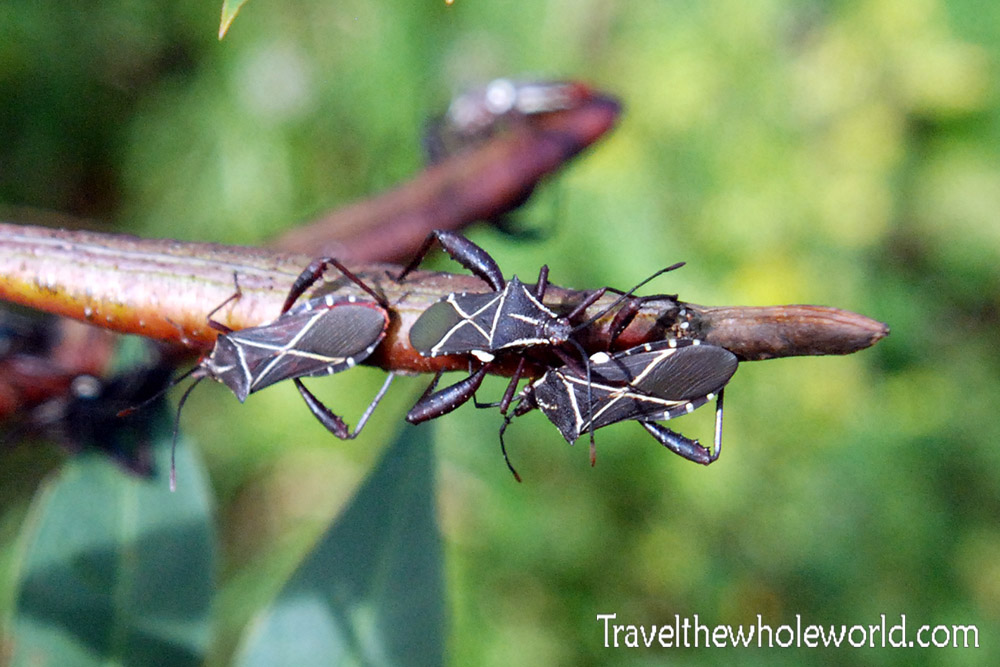 Lastly, I found these insects along the hiking trails. Sting bugs aren’t really all that interesting, since I eve have them back home in Virginia, but true to its name one of these guys actually fired a shot at me! I found the dung beetles more interesting, only because I had never seen them before and though they only lived in Africa for some reason. If and when I return to Haiti, my focus will be in the wetlands and national parks that are found in west. From there I hope to see large migrations of birds, and if I’m lucky some of the giant crocodiles! 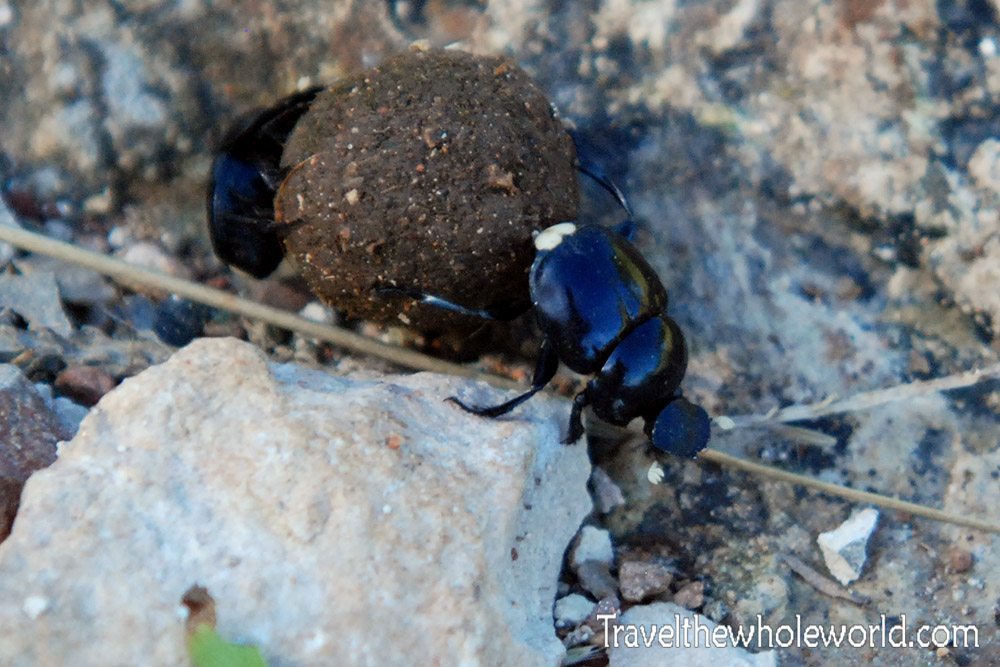