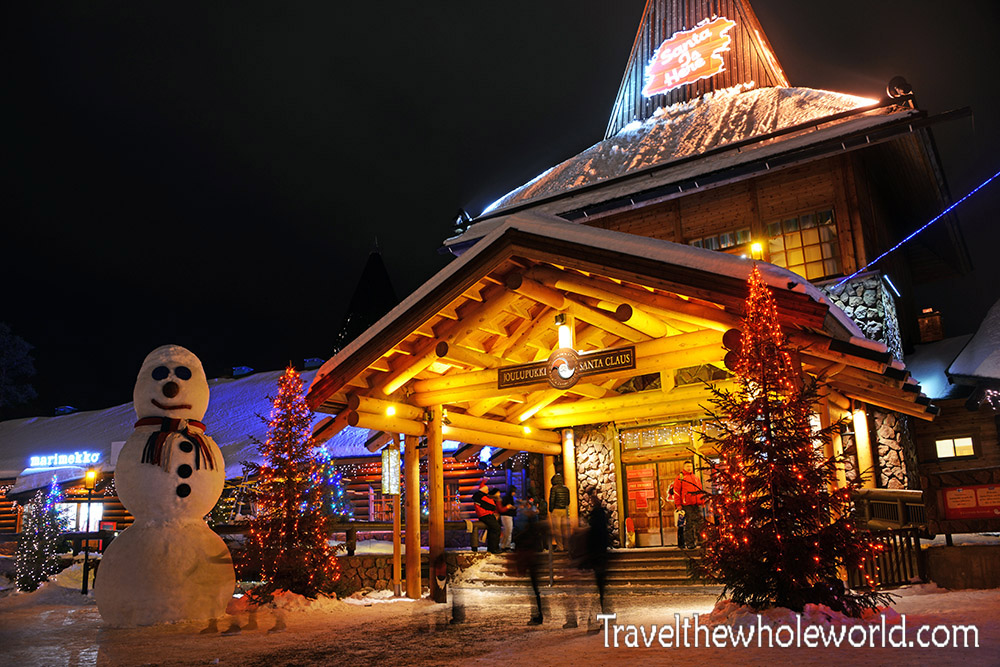 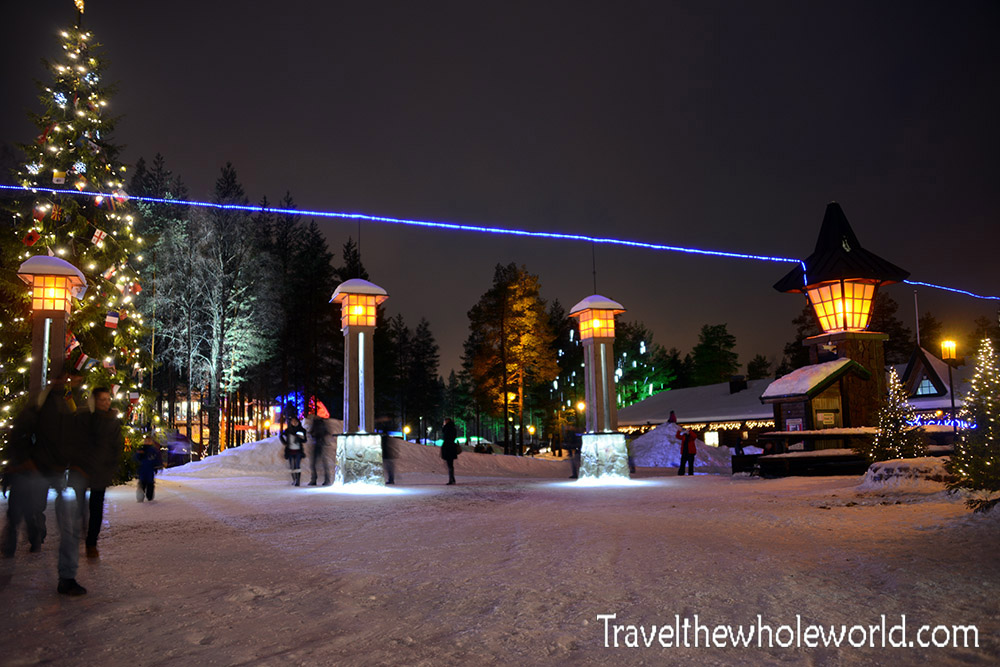 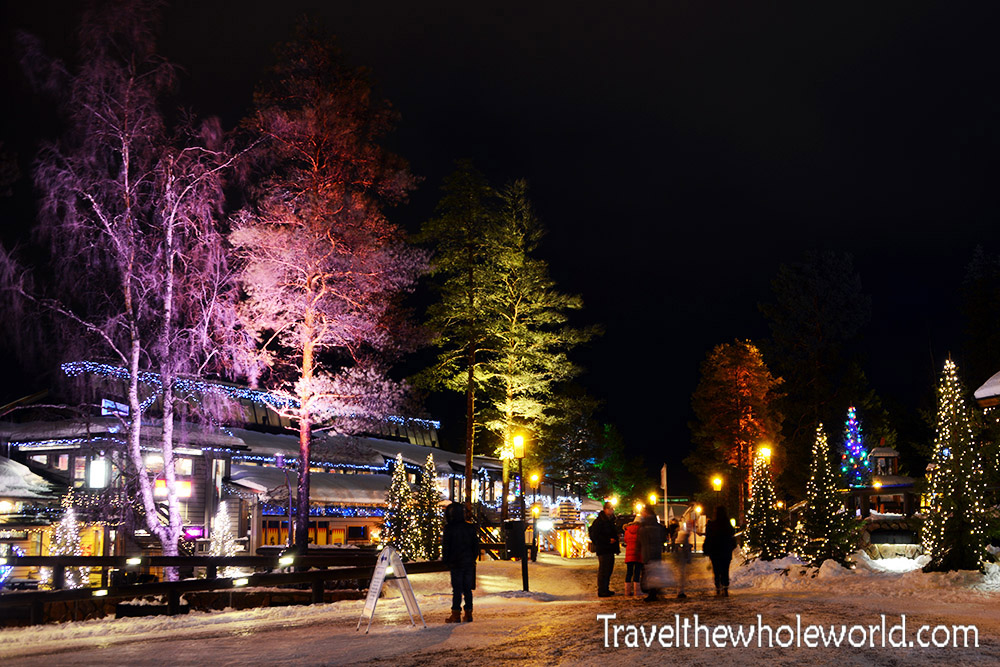 I think Christmas Village is one of the most unique places I’ve been to in Europe. In all honesty I think a weekend here for anyone would be satisfying enough. The experience for me was mostly about enjoying the decorations and Christmas themed attractions. I was able to visit on actual Christmas Day and I also enjoyed being directly on the Arctic Circle. Since it was one of the shortest days of the year, it was always night here which added to the experience. Above is another shot of Christmas Village.

This is a shot of some of the igloos they have set up in the area. These come in various sizes with different types of entertainment in side. I believe some of them are ice rooms for accommodations. 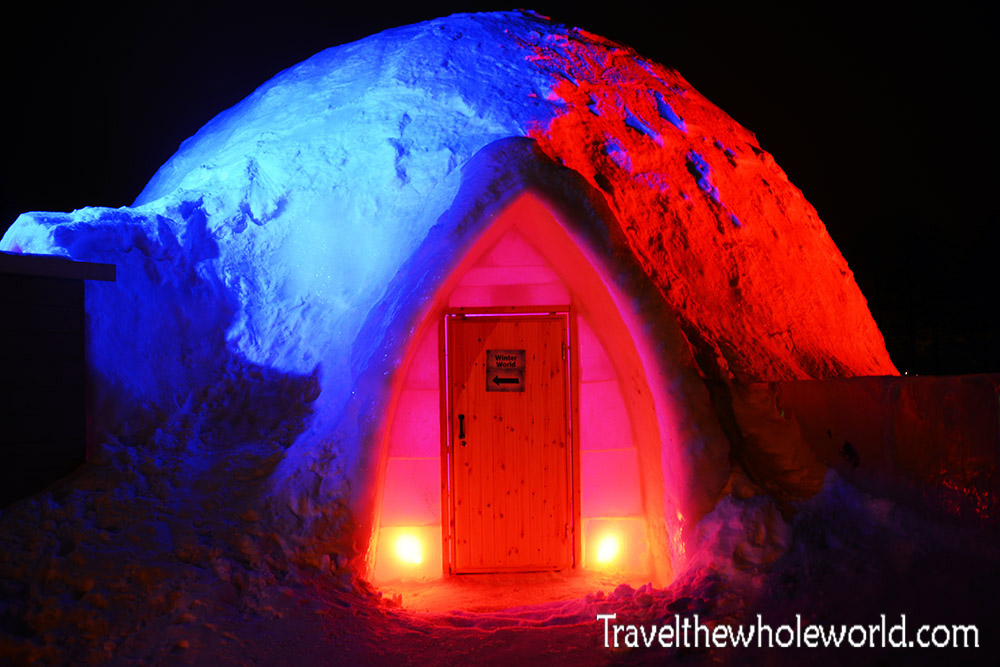 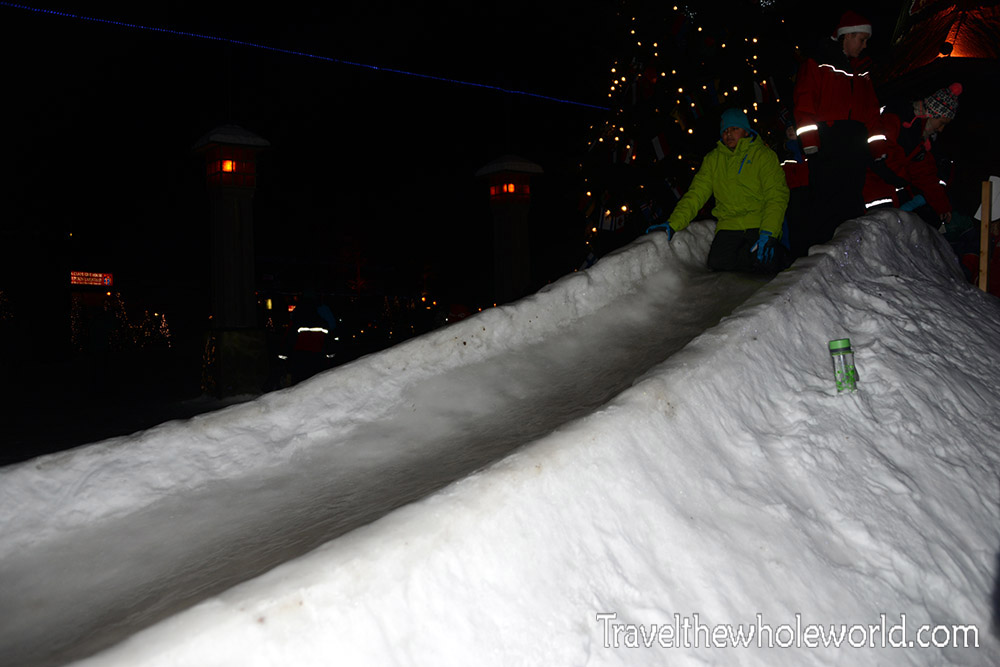 For sure most of the activities here are geared towards children, but as an adult it’s still an interesting place to visit, especially when I went on actual Christmas Day! There are plenty of things for adults to do, but I think the kids have a bit more fun with things like this snow slide above and riding a snowmobile below. 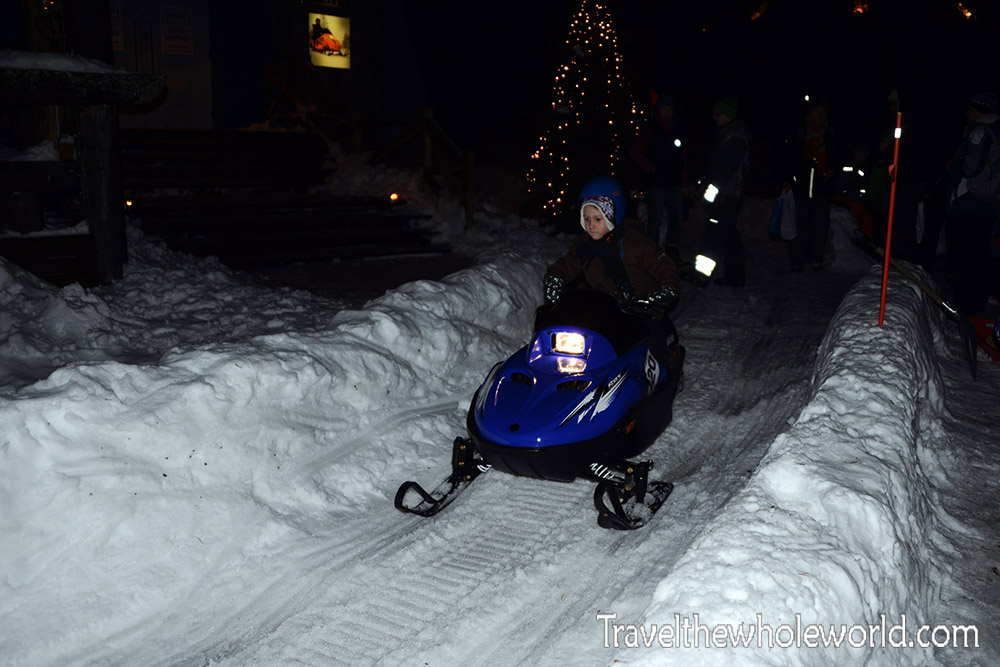 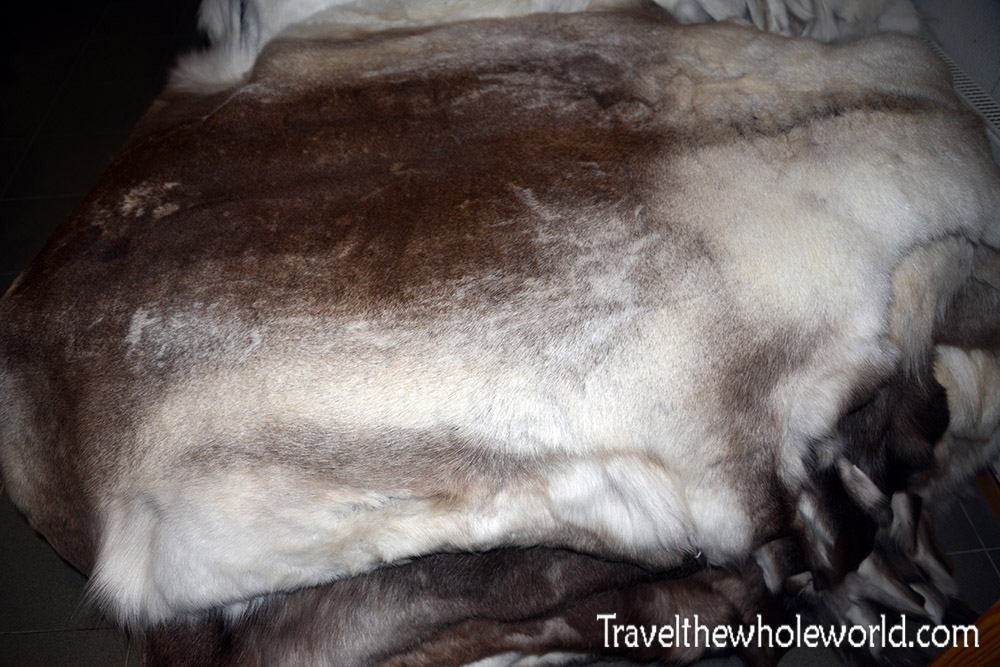 While of course Christmas Village and the nearby Santa Park are major tourist attractions, the local culture of this part of the world shouldn’t be overlooked. Luckily Christmas Village has plenty of museums and even people who still wear the traditional clothing. The photo above shows a stack of reindeer fur that are sold in most of the Santa Claus Village Shops. This is a common souvenir in all of Scandinavia. 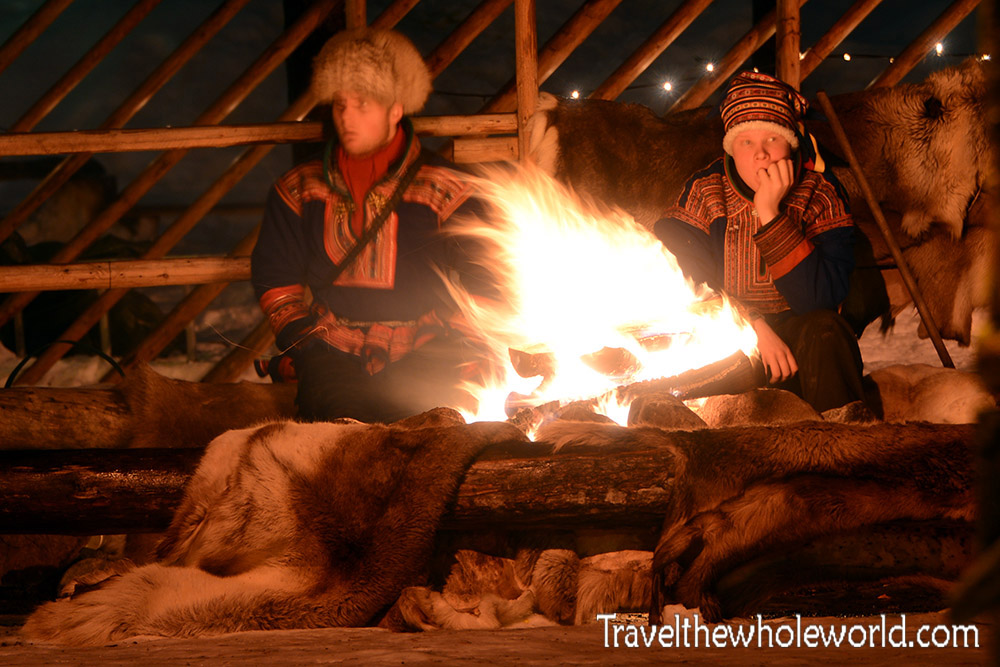 Above are some Sami People who are wearing traditional clothing. These guys were offering reindeer sled tours along with some warmth by the fire. 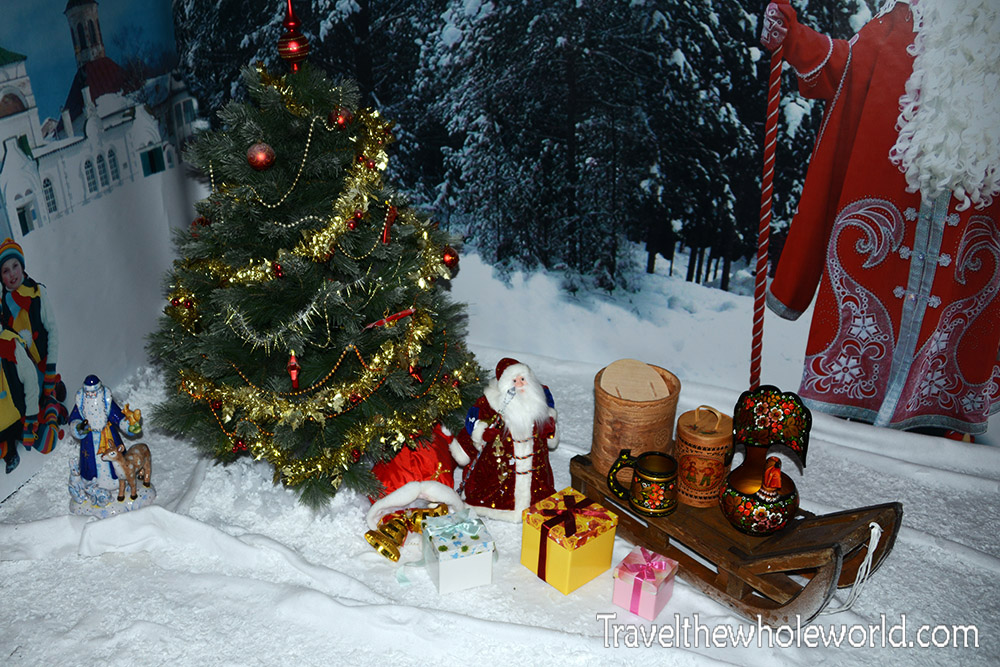 Santa Claus Village has its own museum that gives some background on Christmas and local culture. It’s pretty small and only requires a short walk through a hallway that ends with a photo op with Santa. The museum is free and they have about a dozen exhibits. These range from a family observing a Christmas dinner at home to a collection of Christmas related items. 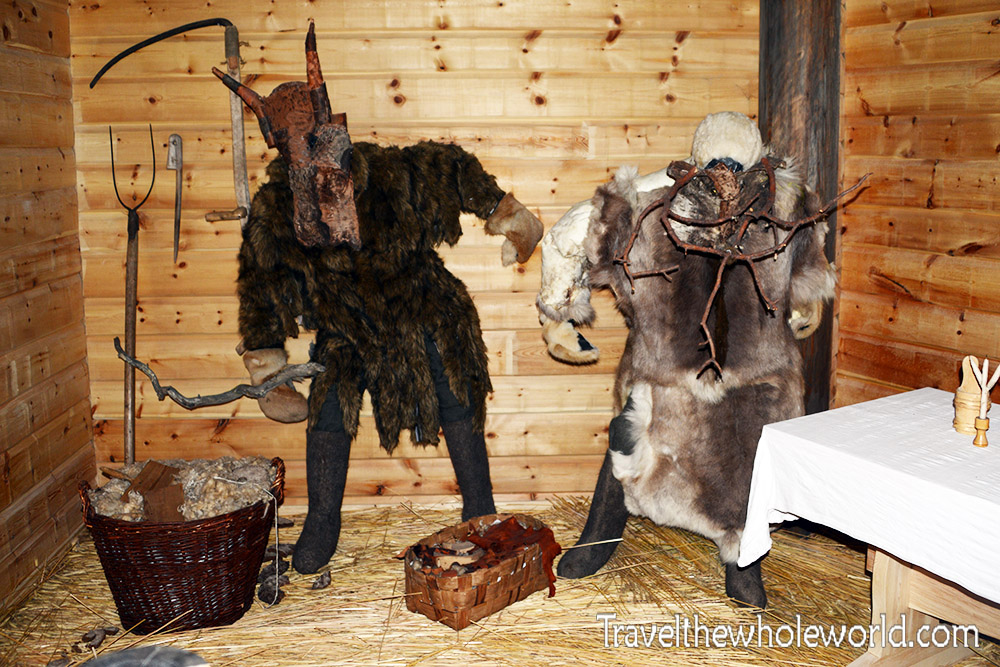 I never really understood the strange figures above. My first assumption was they were used to scare little kids into behaving, or maybe they were somehow evil allies of Crampus. From what I know now, it’s my understanding locals would wear these reindeer antlers and other intimidating clothing in order to ward off evil spirits. 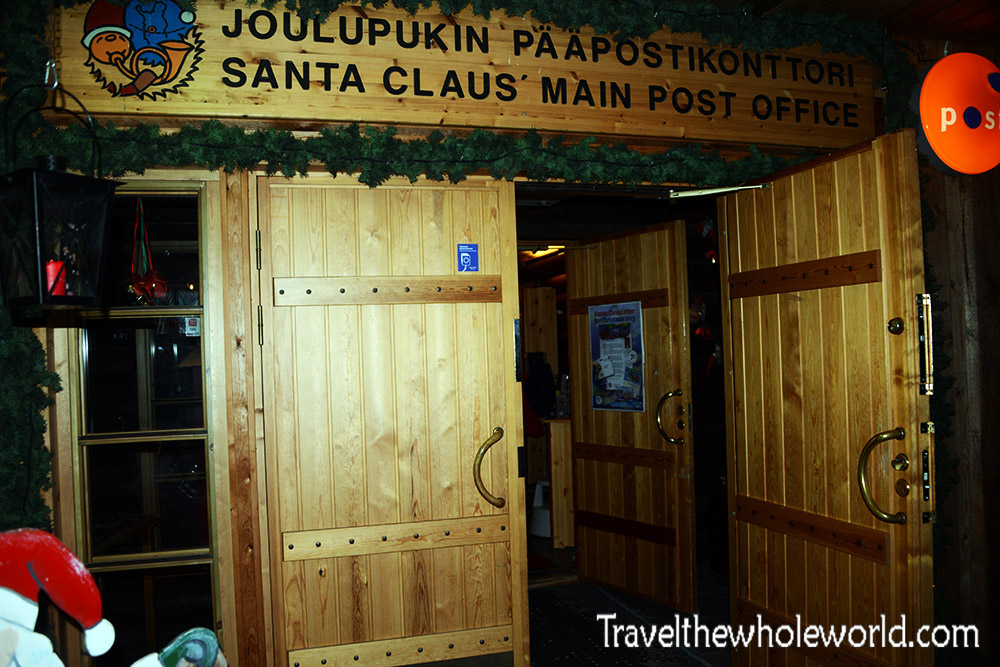 Santa’s Village even has it’s own fully functioning post office that allows you to write letters and have them delivered anywhere in the world. The photo above shows the entrance to the post office. Below are some visitors writing letters to friends and family. It’s a pretty busy place actually and I regret not sending a letter out from here to someone. 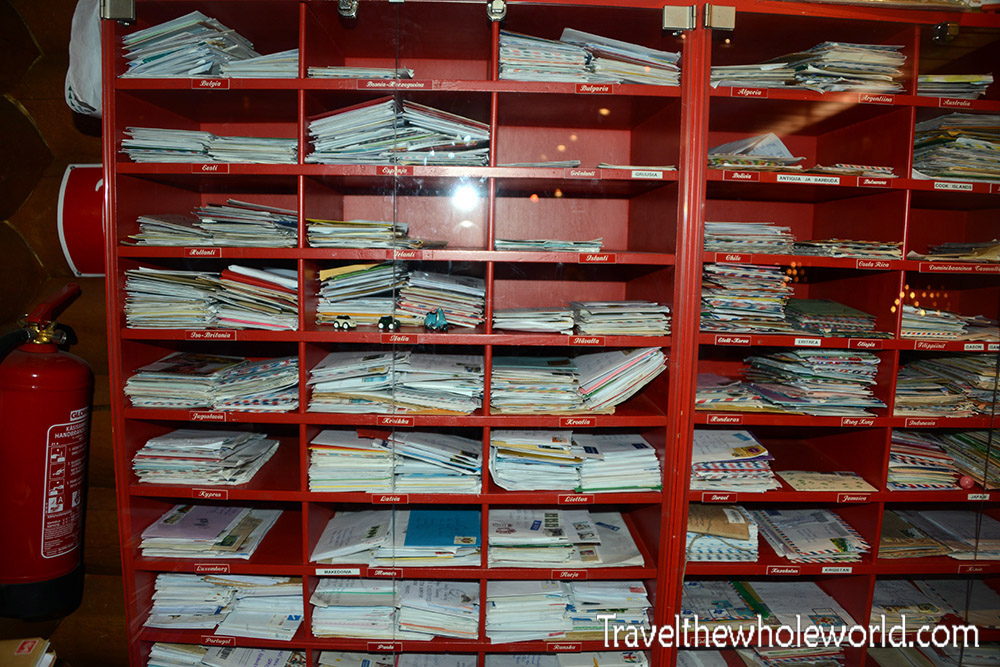 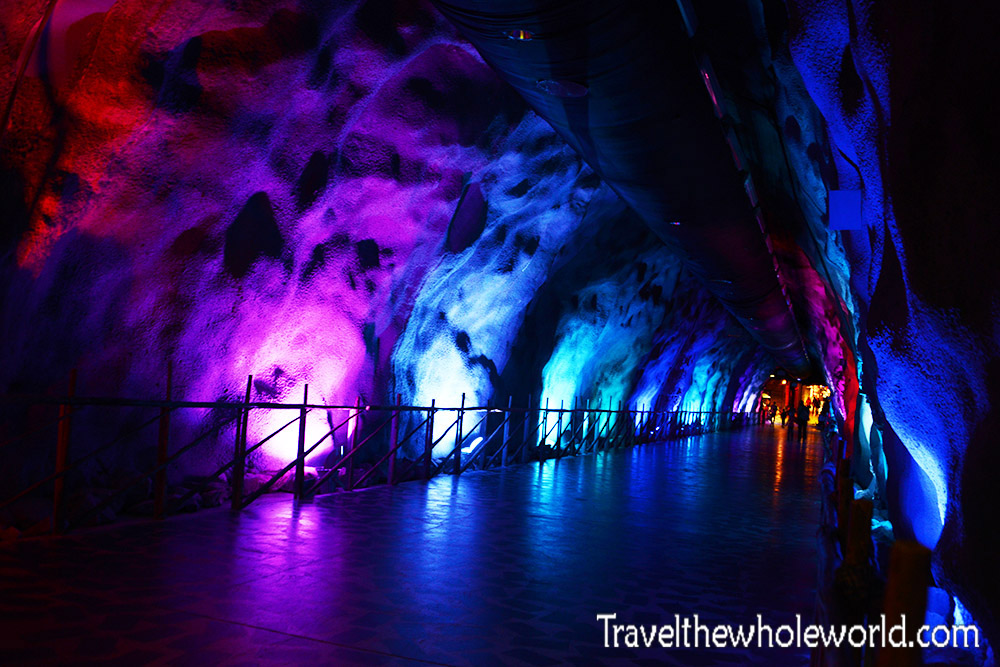 Right next door to Santa’s Village is Santa Park; a small Christmas themed amusement park. Unlike Santa Claus village, which is outside and subjected to 20 degrees below zero, Santa’s Park is entirely built underground and kept nice and warm! On a very cold day in Finland this place is a great refuge for a cold snowy day. Above is a photo showing the underground tunnel that brings you to the park. You’ll actually have to pass through two tunnels before you make it to Santa Park. 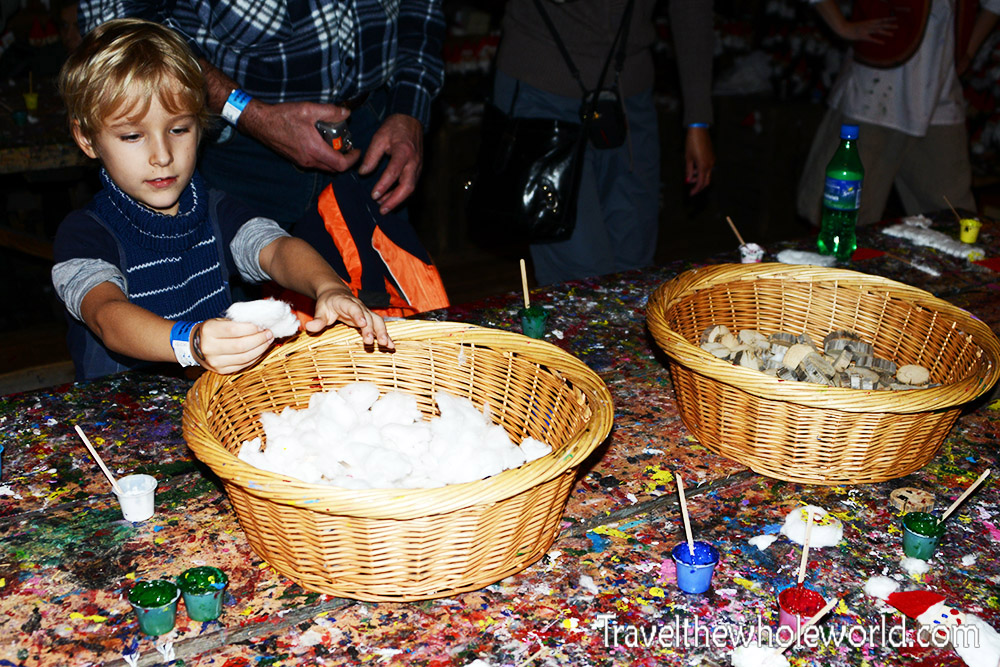 Like Christmas Village, Santa’s Park is clearly focused on younger kids, but it’s still a fun visit for everyone. There’s lots of workshops here where you can make your own art such as the elf workshop above. The photo below shows one of my simple creations at the elf shop. 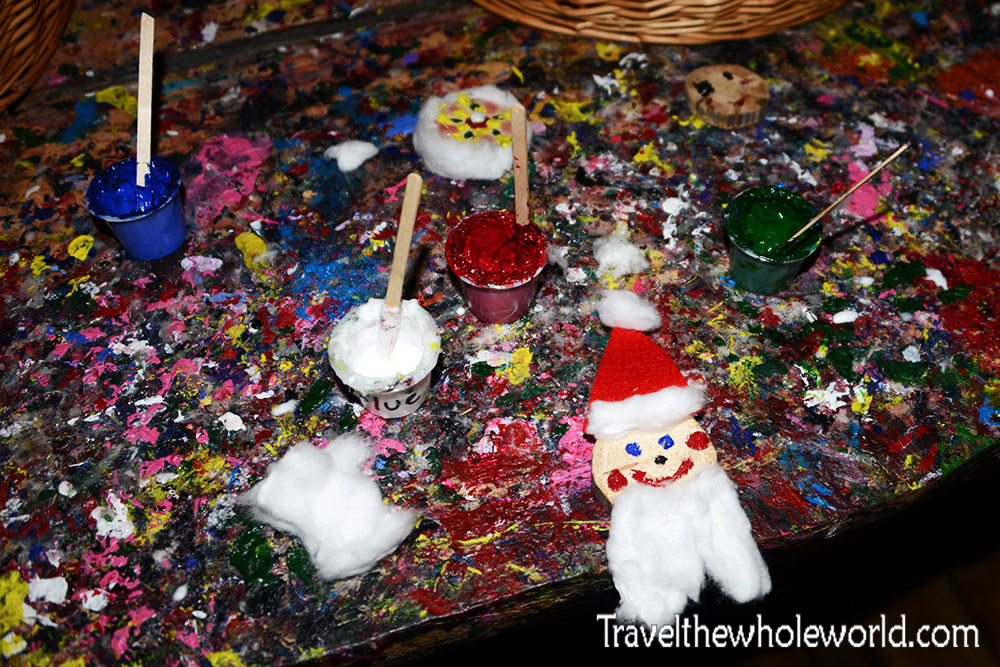 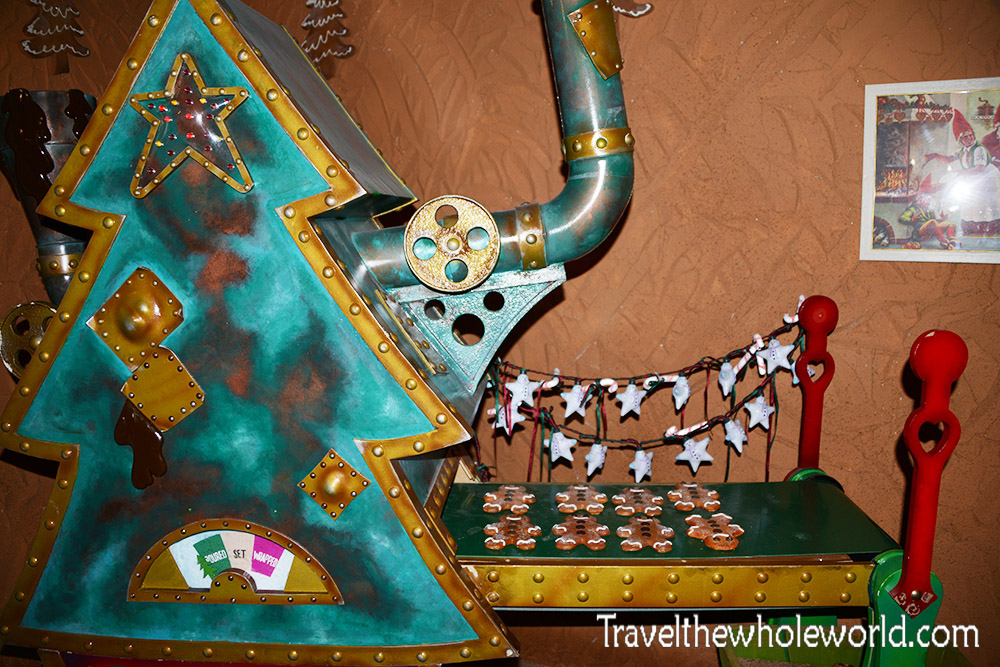 More along my lines is this gingerbread cookie shop! They bake cookies for you here and then you’re free to decorate them with candies and icing. Below was my proud creation which I consumed soon after. If you were traveling back home soon enough, these could also make good gifts for friends. 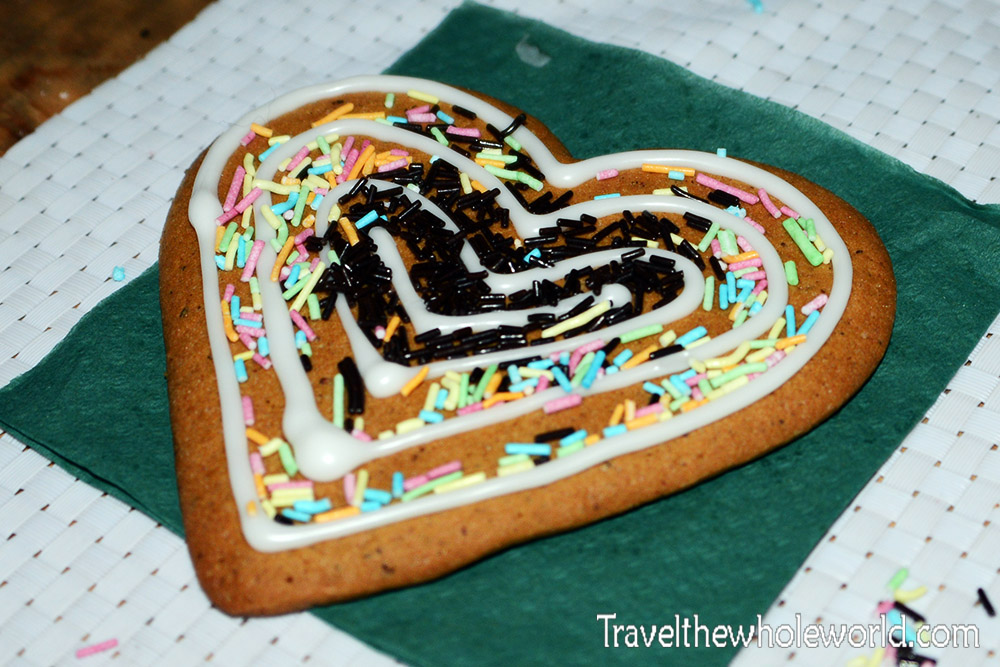 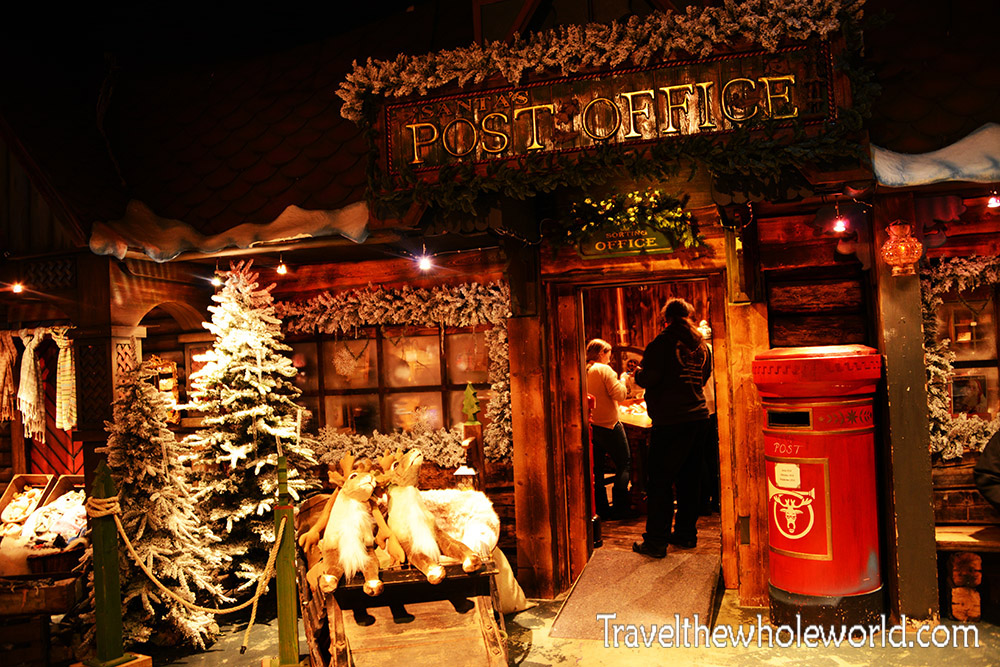 As a matter of fact, Santa Park has its own post office. So you could decorate some gingerbread cookies and then walk a few stores over and have them delivered for you. 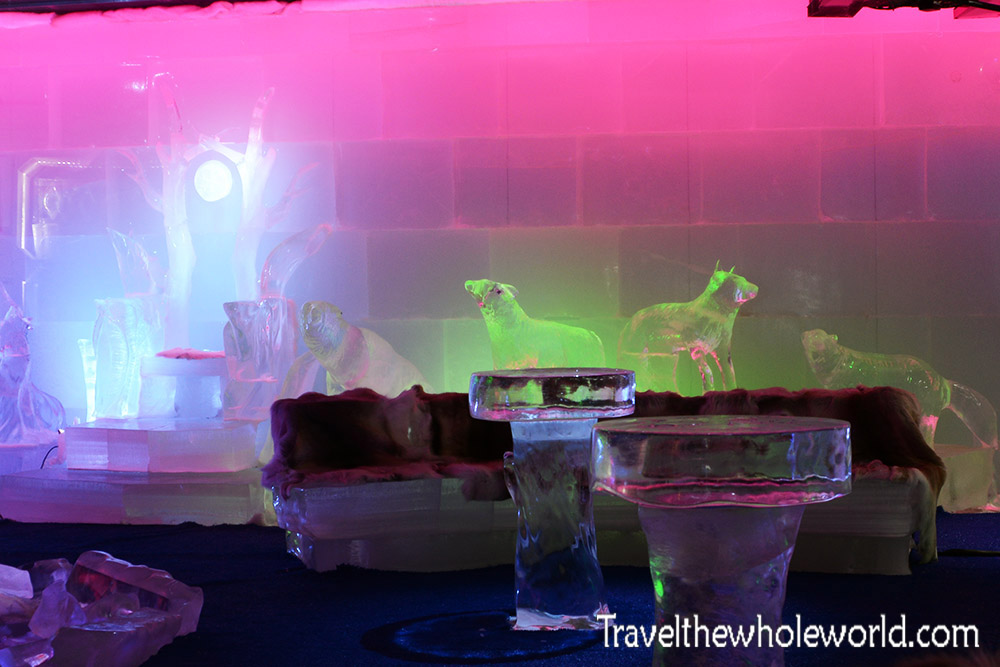 I didn’t take so many photos in Santa’s Park. There were some actual rides here for little kids, a restaurant and several shows each day. I did take a picture of this frozen ice room above where they had some sculptures on display. I think half a day is all an adult would need here without kids. I don’t even remember if it’s possible to grab a drink here or not. Either way I would not have felt complete visiting Finland over Christmas and not making it to Santa’s Village and Park!