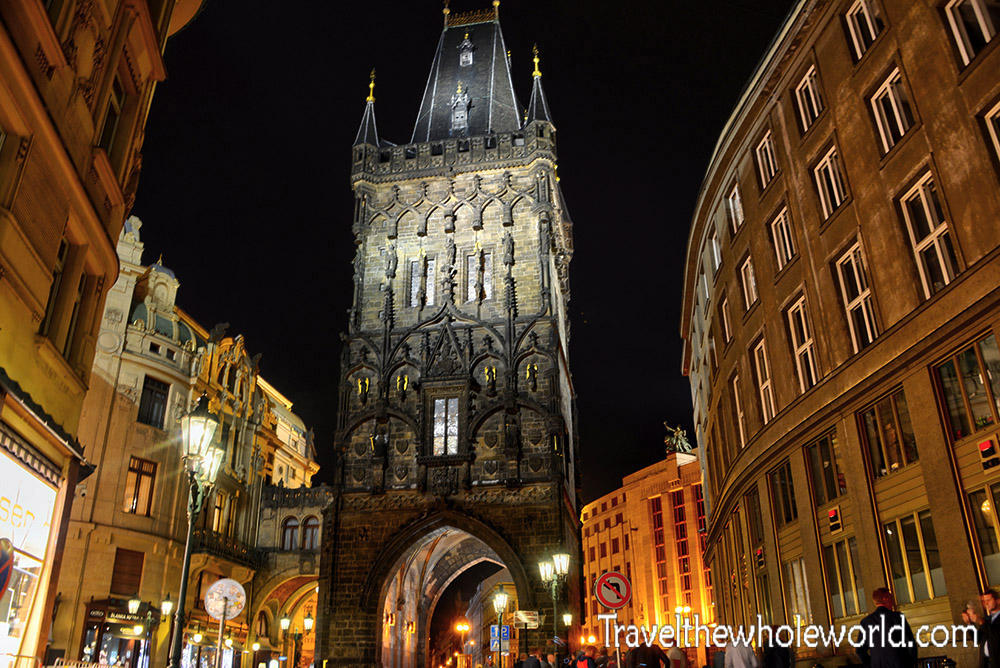 Europe is well known for having the most beautiful cities in the world, and I have to admit that if I backpack here for too long I start to become numb to them. Regardless of how much time you’ve spent in Europe, Prague will always amaze you. If I had to sum up Prague in one word, it would be wow! This could quite possibly be the most beautiful city in the world. Rather than confined to the heart of Prague, impressive medieval buildings and architecture spans across the entire city. This picture above shows the famous Powder Gate, which was built in the 1400’s and is one of the most famous icons of the city. It also happened to be one of the first places I stumbled upon after entering Prague one evening. 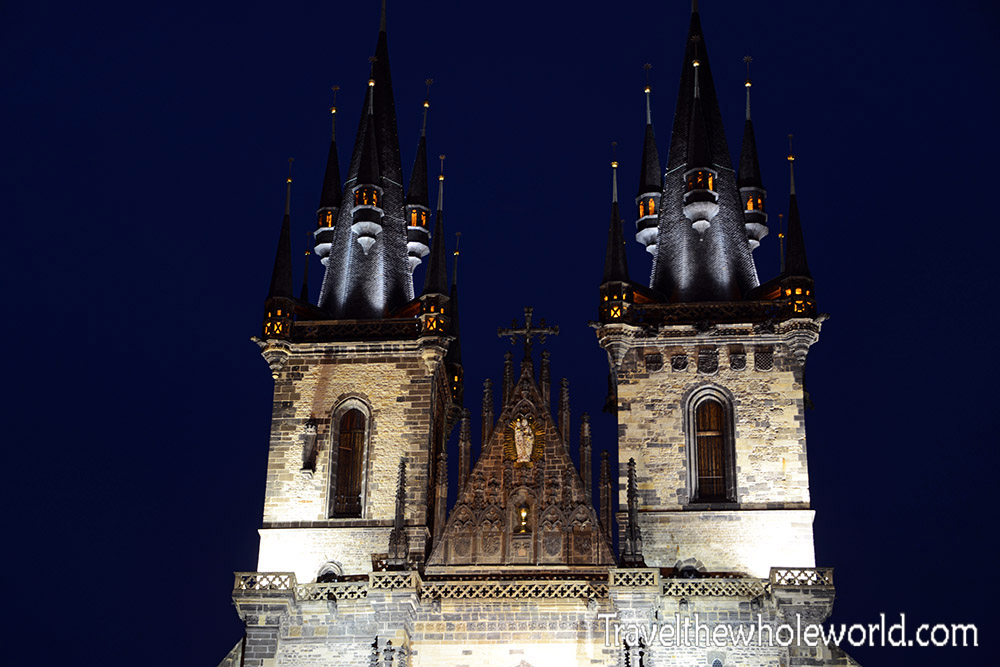 Another beautiful building in Prague is Church of Our Lady before Týn. This ancient church began construction in the 1300’s, and is one of the most impressive Gothic churches I’ve seen. I photographed only the towers and spires because of another building directly in front of it blocks most of the view. To properly see the church you’d either need a drone or get on the roof top of a high building! 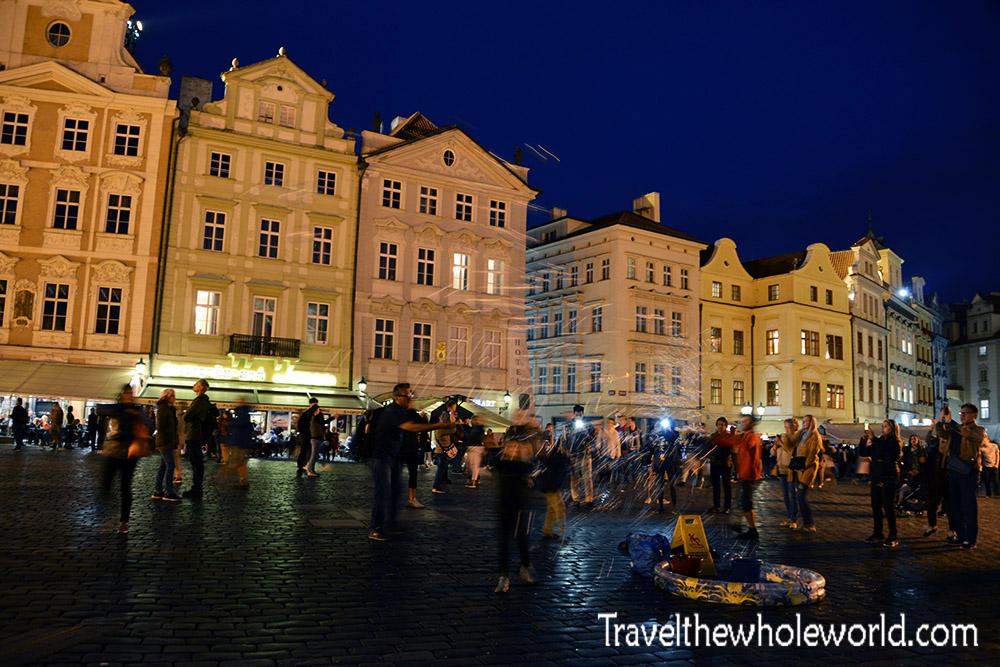 Tyn church is located in Prague’s Old Town square. The square is filled with memorials, museums, restaurants, and even a famous medieval astronomical clock. I was a bit annoyed to find that the clock was covered up for renovations, but this is a place I’m sure to return to. Old Town Square was full of people when I visited one early fall night. The streaks you see in the photo above are from someone blowing massive bubbles to the delight of young kids in the square. 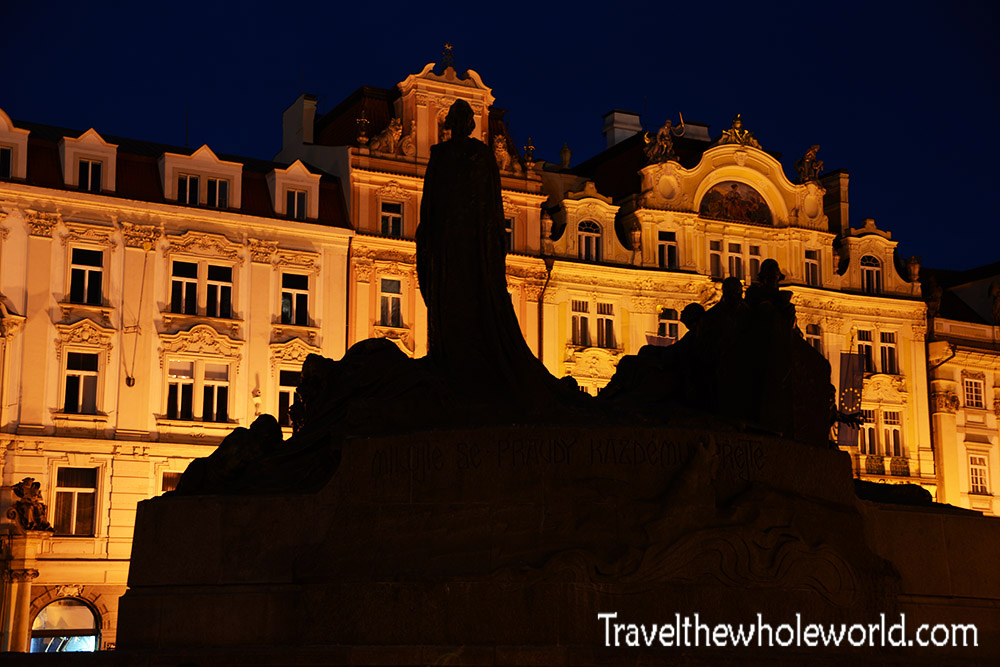 If you visit the square you can’t miss this enormous memorial dedicated to Jan Hus. The memorial was so large it apparently required its own little villa to be built. Jan Hus was a protestant who was executed in 1415 CE, which led to a wars and a successful revolt against the Vatican. The memorial was opened in 1915, exactly 500 years after his death. 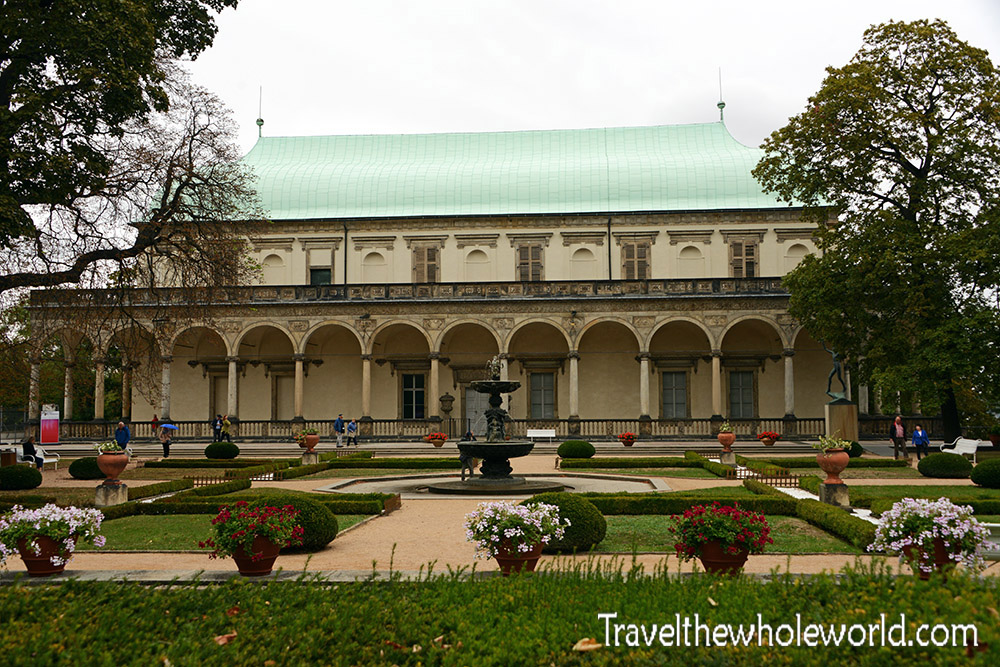 The next morning the first place I visited was Prague castle. I didn’t even realize I was entering the castle grounds until I had walked around the gardens for a bit. The castle gardens required going through security, but afterwards you’re free to explore the garden and the castle itself. The gardens were vast, but nothing too inspiring to me. 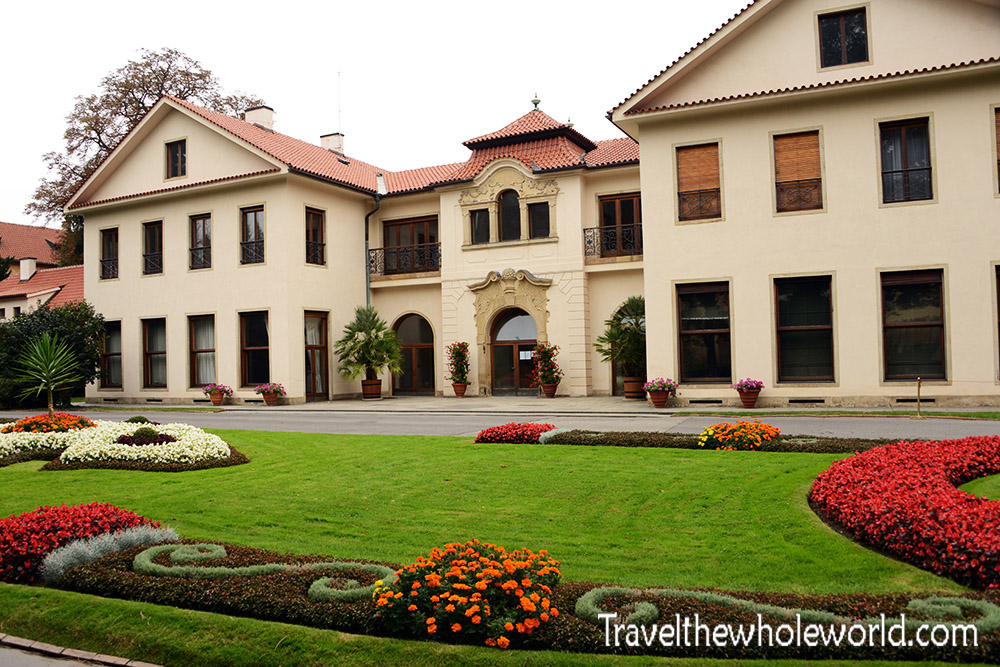 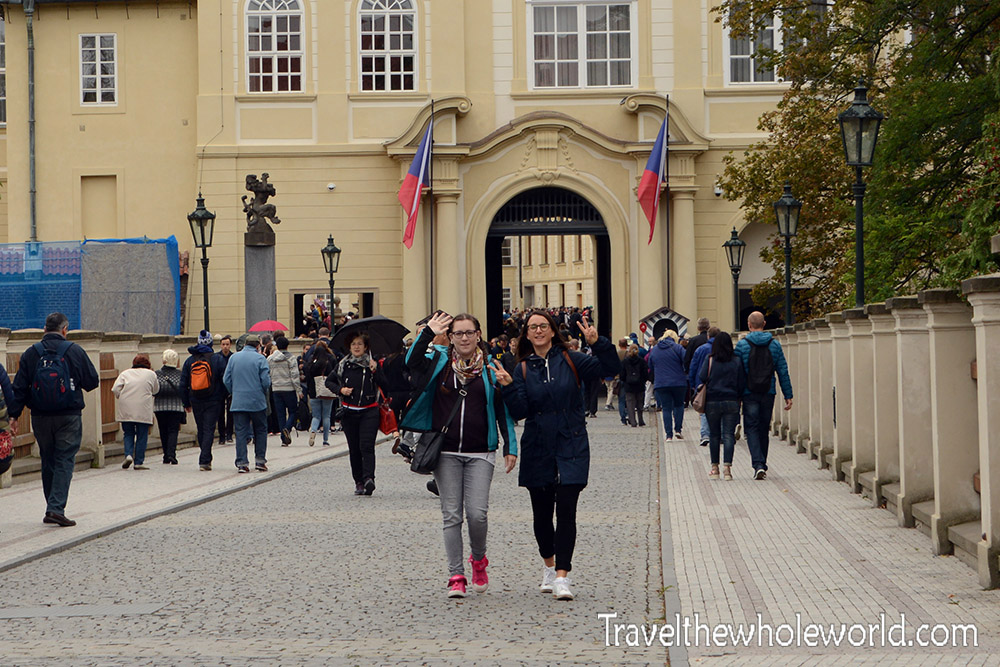 I jokingly told these two women who were waving to me that they ruined my photo. I was actually just taking some sample shots to get some adjustments right but decided to make them famous 🙂 . From the gardens, I walked to this entrance that led to the Prague Castle, which was guarded by the man below. 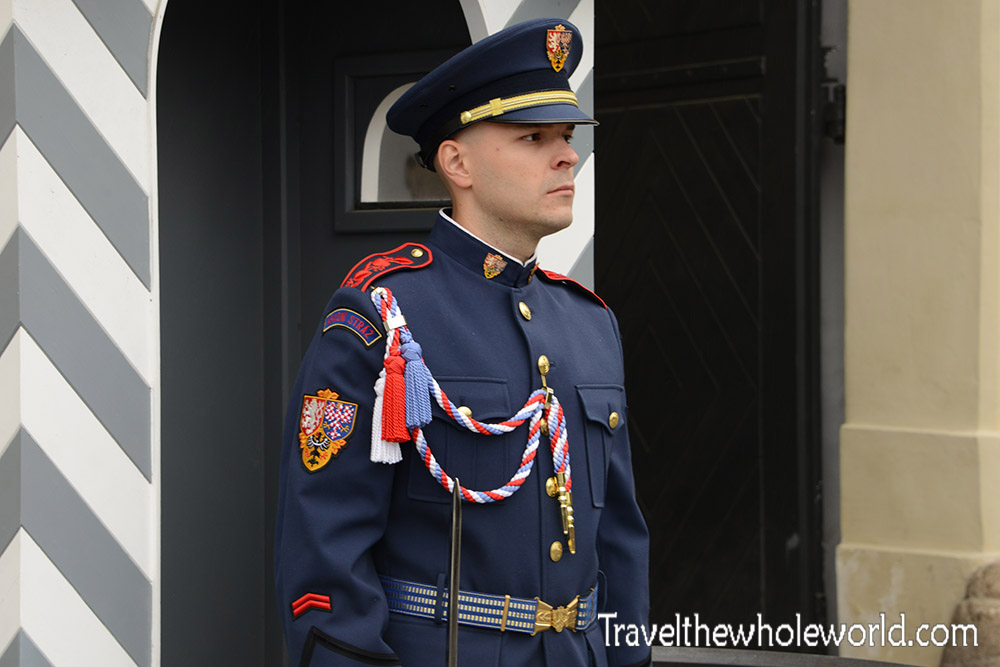 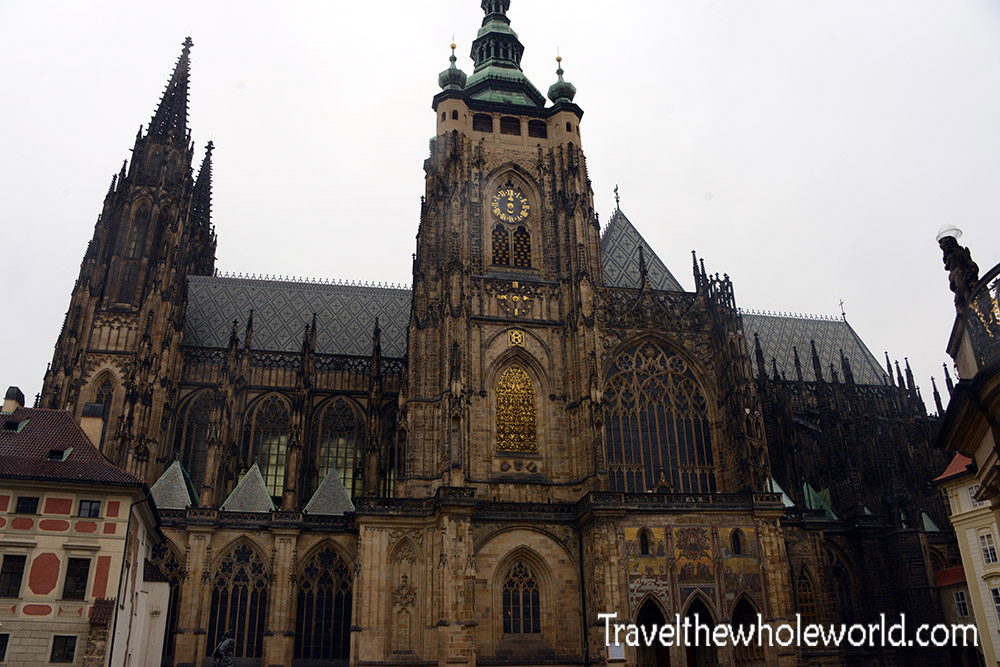 Within the castle grounds you’ll find the largest and most important cathedral in Czechia, St. Vitus Cathedral. The cathedral is so large actually it’s difficult to properly photograph it, and from what I saw online many professional photographers didn’t do much better than me. This cathedral’s roots go way back to 1344 CE when groundwork first started, and like most ancient structures it was renovated and expanded throughout its history. 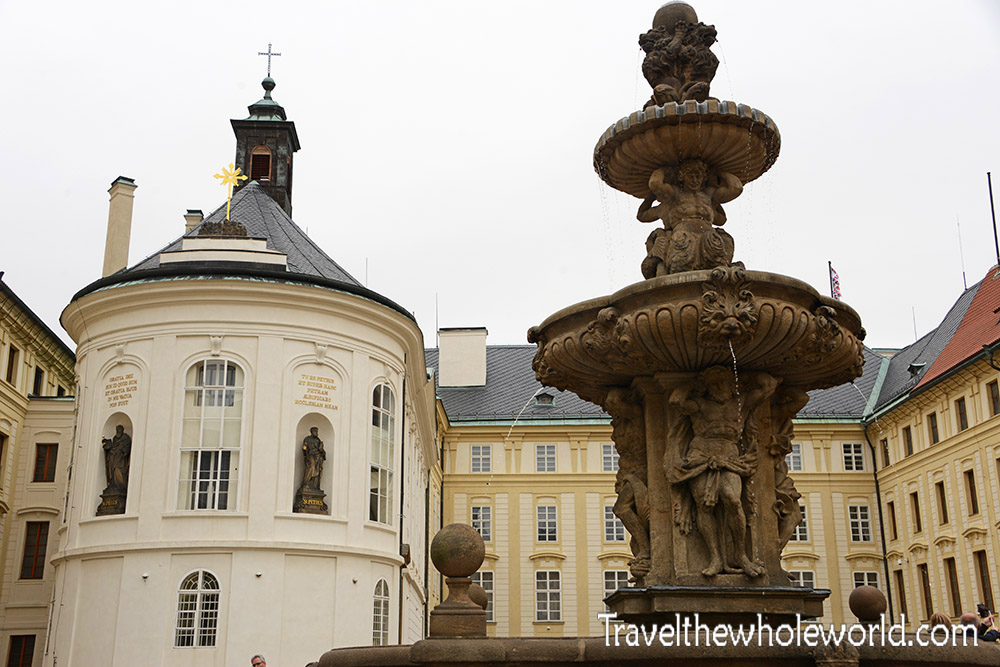 I think you could easily spend a full day exploring Prague castle due to its enormous size. Rather than post a hundred photos of the castle I’m only limited to a handful to save space for other places in the city. I missed out on some good people shots, such as what seemed to be a changing of the guard that passed by me unexpectedly. The photo above shows the courtyard, which I aimed my camera a bit high to avoid the crowds. Below shows one of the massive walls of the castle. 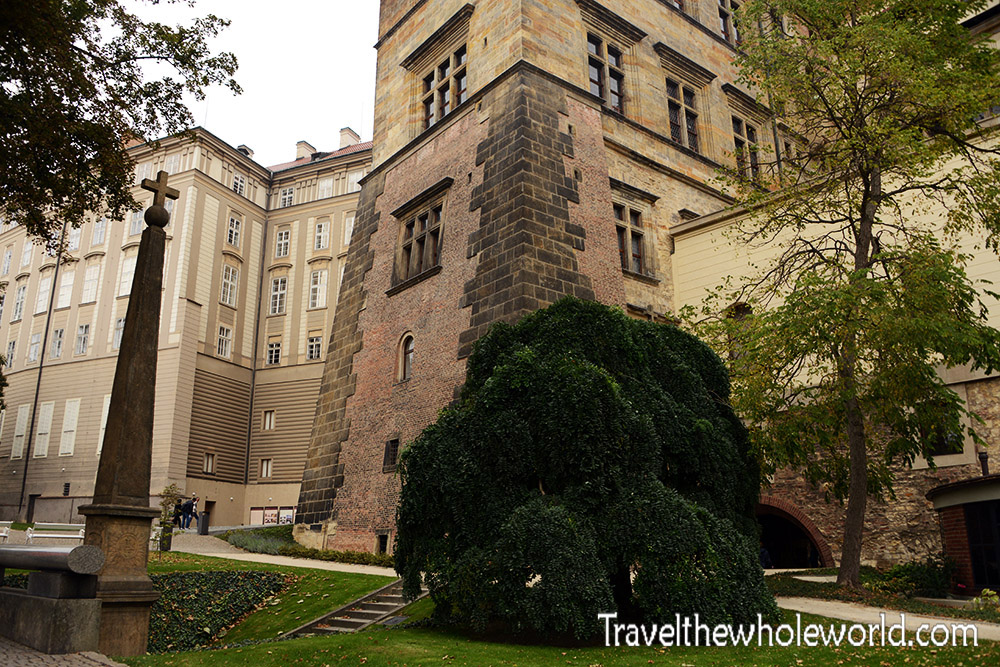 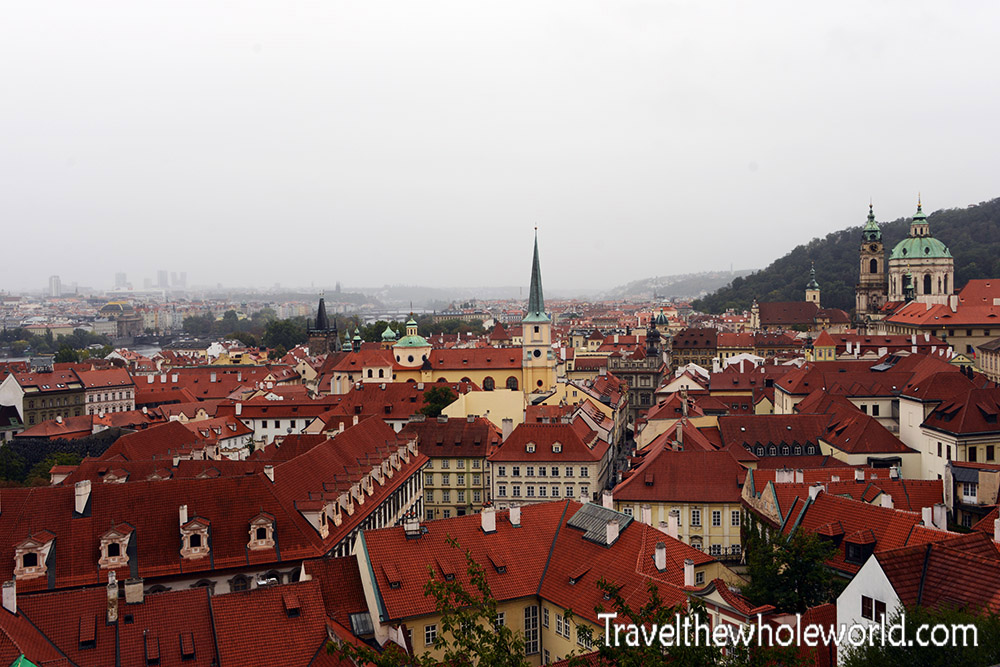 At one end of Prague Castle, the cobblestone streets open up to a ledge that gives some beautiful views of the city. The weather wasn’t too great on this day, but I’d love to return and see the city during the spring or even after some deep snow. While it doesn’t seem possible to get a good photo of St. Vitus Cathedral while standing directly in front of it. Another beautiful view of the cathedral and the castle as a whole is possible from further out in the city. This photo below is a painting, but I can say it’s accurate in terms of what the view looks like. 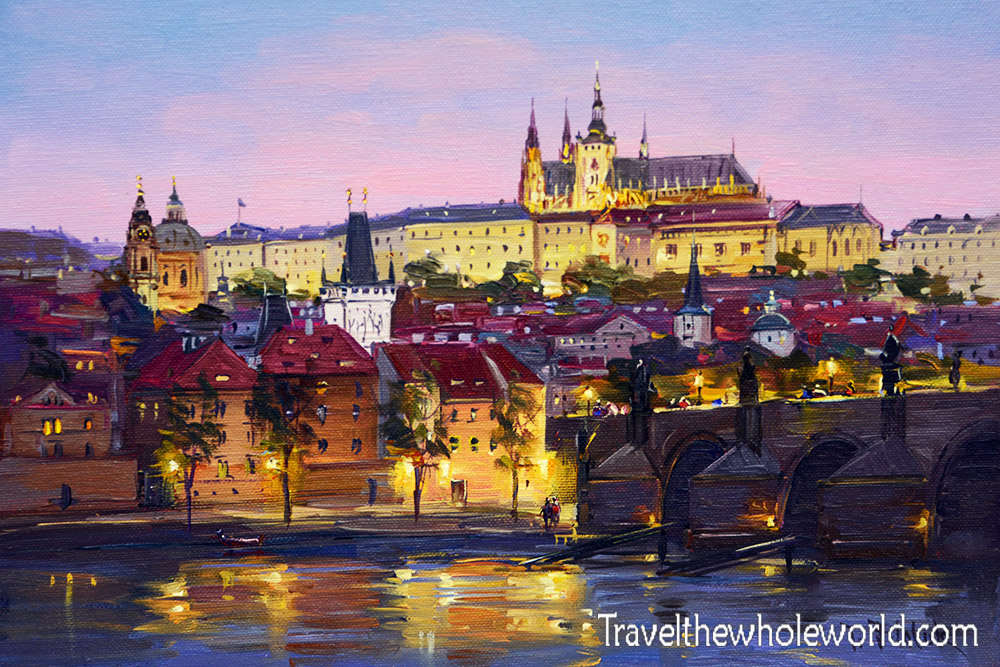 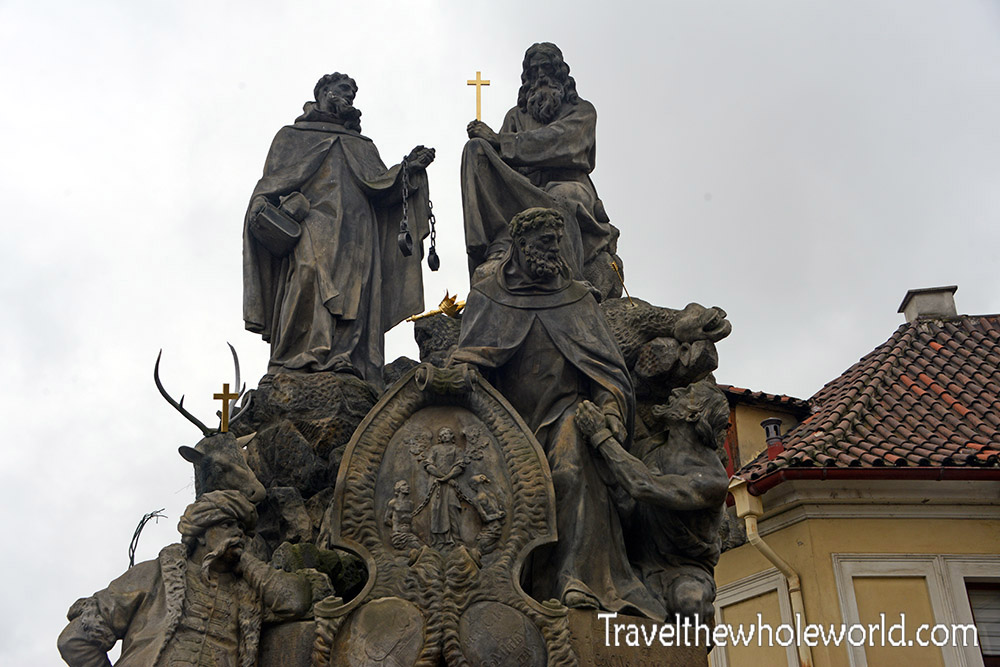 I was lucky that during my walks I discovered Charles Bridge. This historic bridge is nearly 700 years old, and I would have been a bit upset at myself if I had missed it. I found it to be one of the most unique bridges I’ve been on, because aside from its obvious size and beauty, it had many points of interest on it. These statues above are just some of 30 that decorate the bridge. The statues came later in the 1700’s, and my understanding is that none of the originals have survived the passage of time, but all have been replaced. There are also three towers on the bridge, one that has a small jail in it. I’m not sure if these statues in the cell are telling a story or this really was a place to keep people. 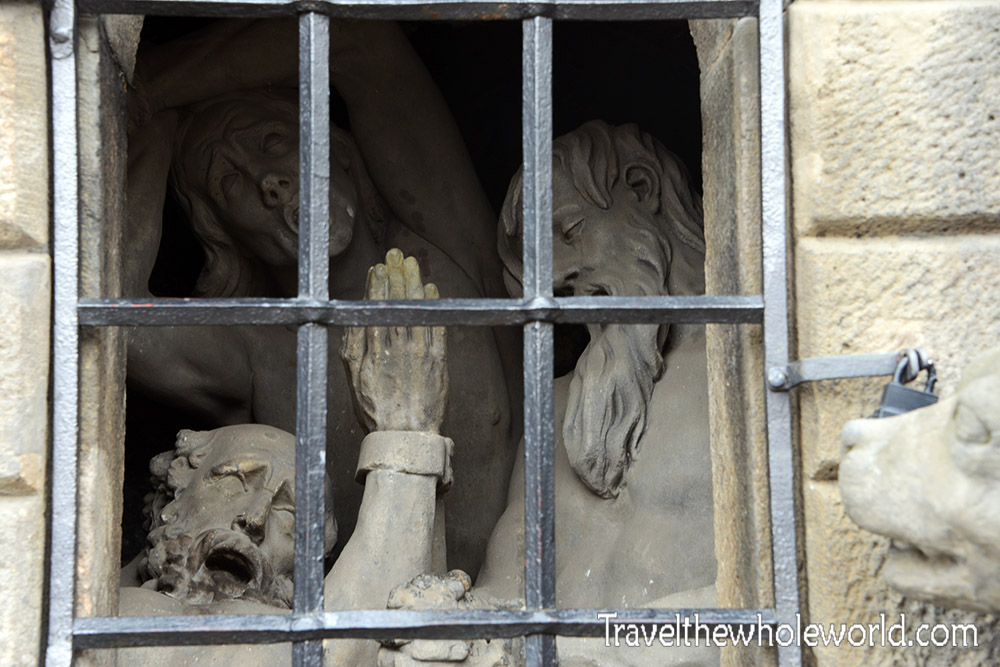 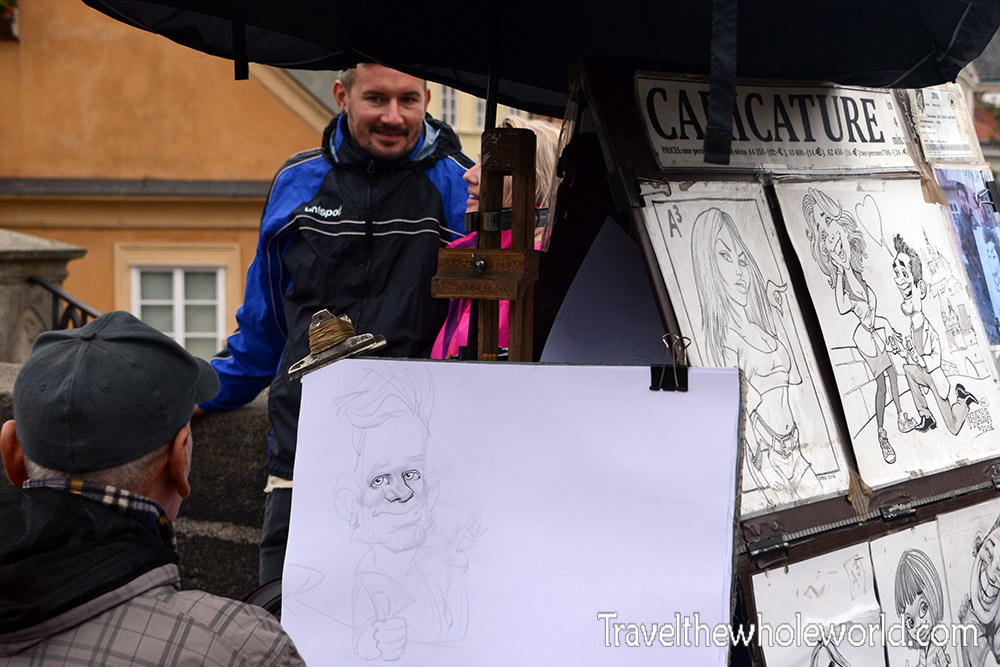 Along the bridge are multiple vendors and artists. It was actually here that I took the previous photo of the painting that showed the cathedral in Prague Castle. Cariacture drawings seemed to also be popular, along with snacks, sweets, and souvenirs. 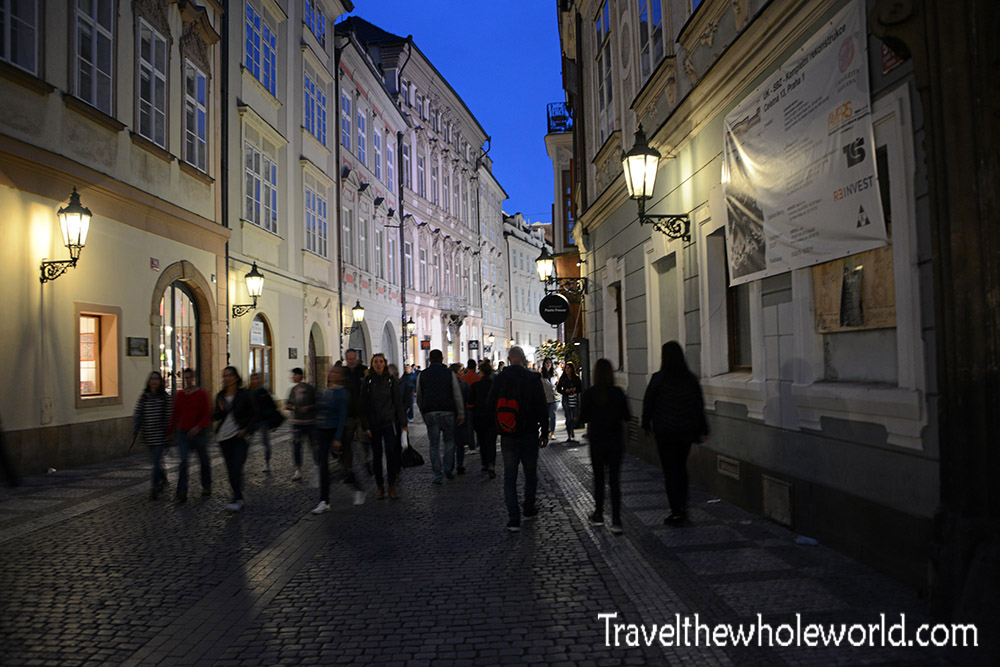 On half my pages I usually write about how my favorite activity is usually just exploring a city on foot. There’s no better place to do that than Prague. I can’t say how much I loved aimlessly walking around this city. Every street seemed full of magic, especially in the early evening. Even the empty side streets that I found myself on where beautiful! 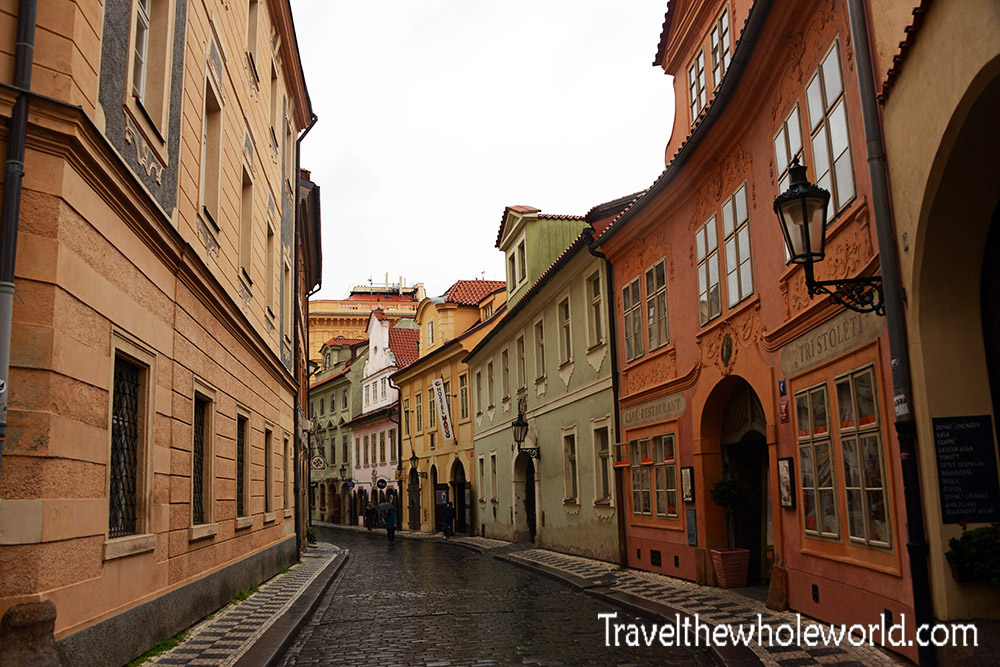 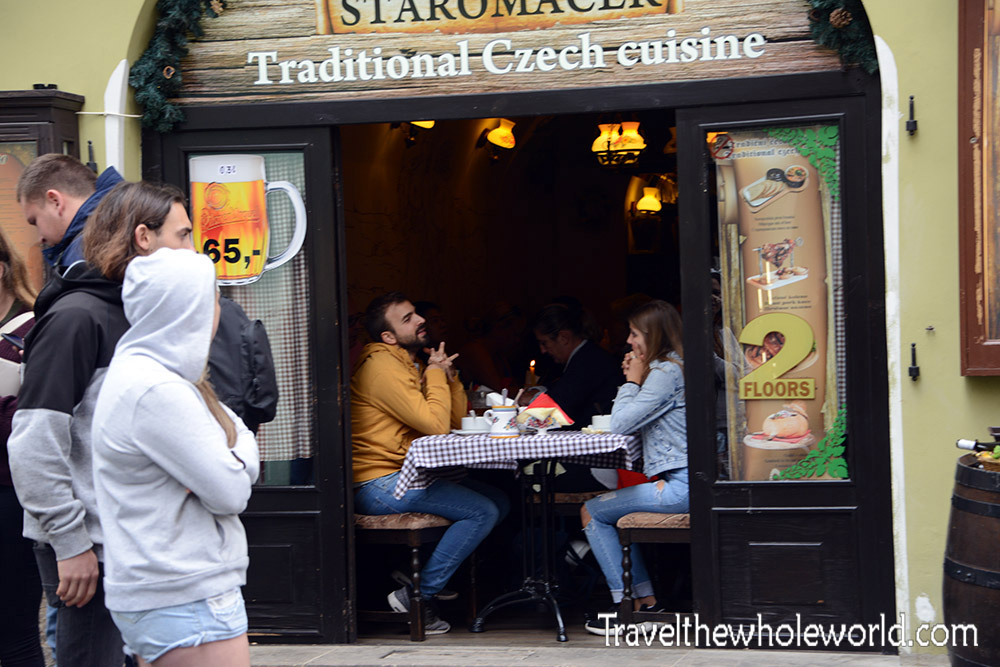 Prague is also known for its dining and beer. I rarely take photos of food, and this has always been a major mistake. These two photos at least shows one of the many places where you can enjoy Czech food. In my Brno page I have a photo of a crazy Czech dinner, which was for one person although it looked like it could feed at least four! 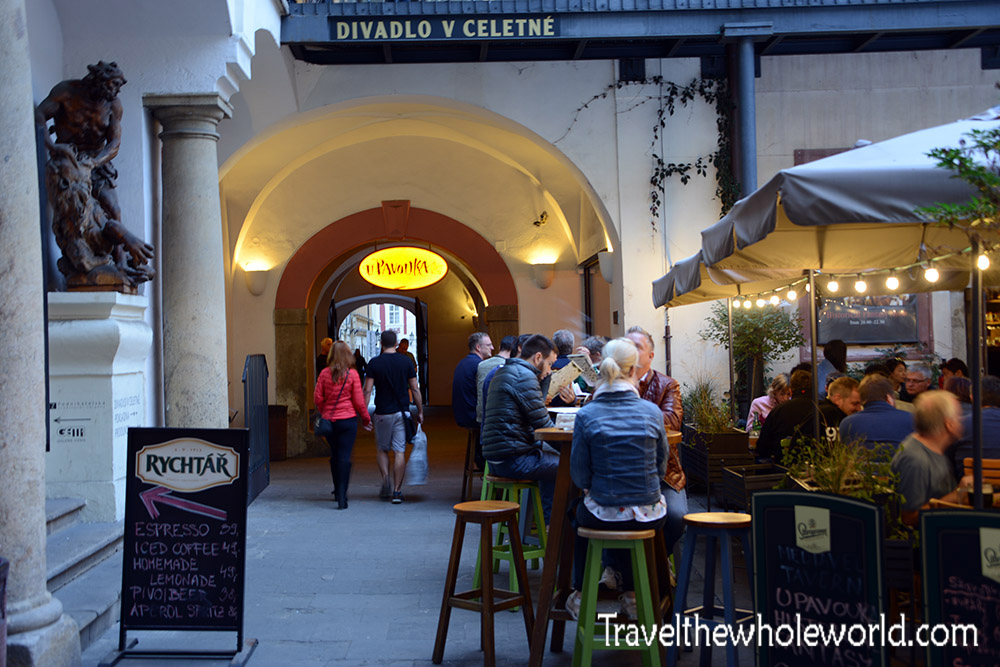 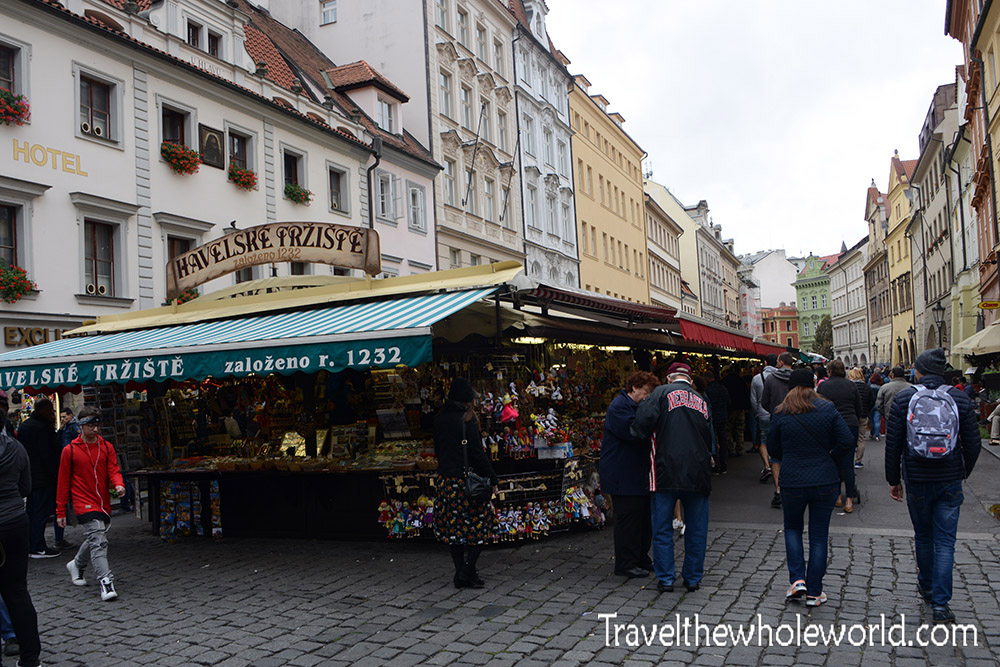 While exploring the city I came across Prague’s largest market, locally called Havelske Trzist or Havel’s market. The market is permanent and is open year round. You can buy just about anything here, from food and produce, to clothes and of course plenty of options for souvenirs. 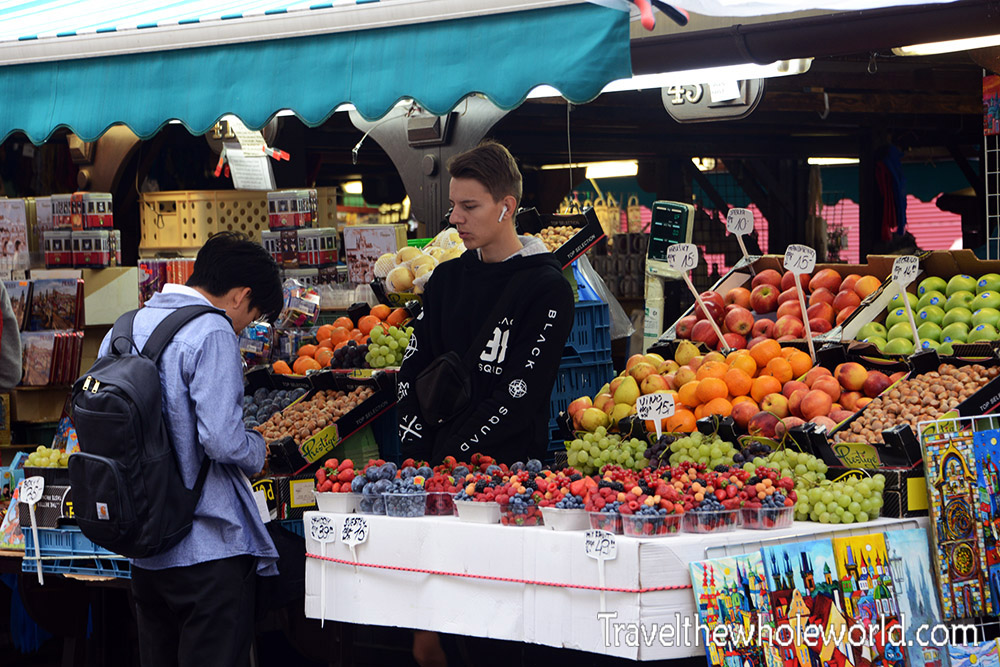 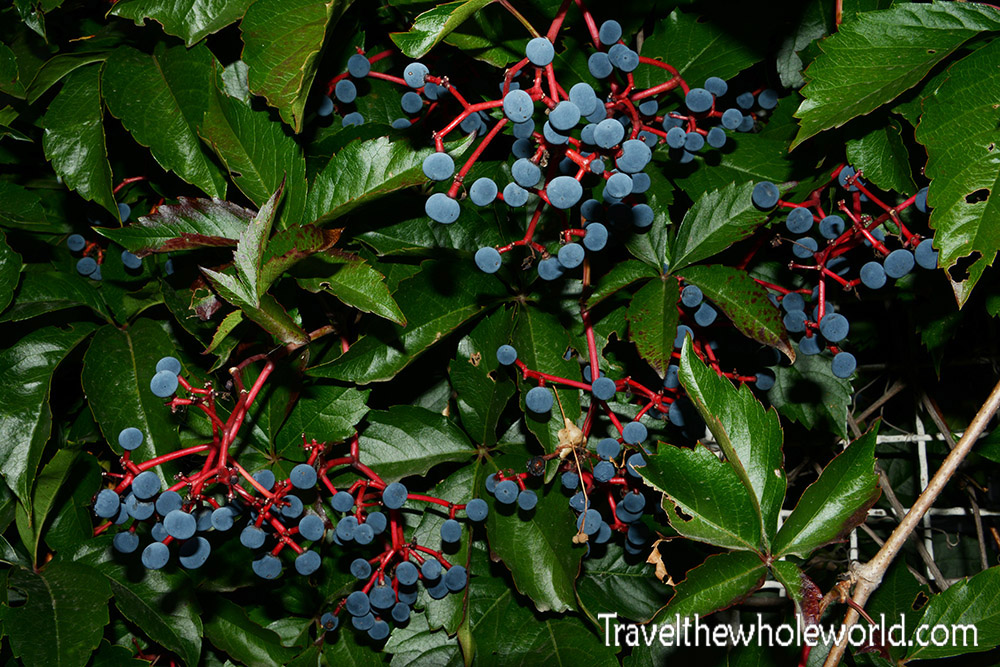 Czechia is actually much warmer than I would have expected. Even in the winter it doesn’t get nearly as much snow as I would have thought. During the late fall most of the trees here were still green, and I even saw these ripe looking berries in the city. 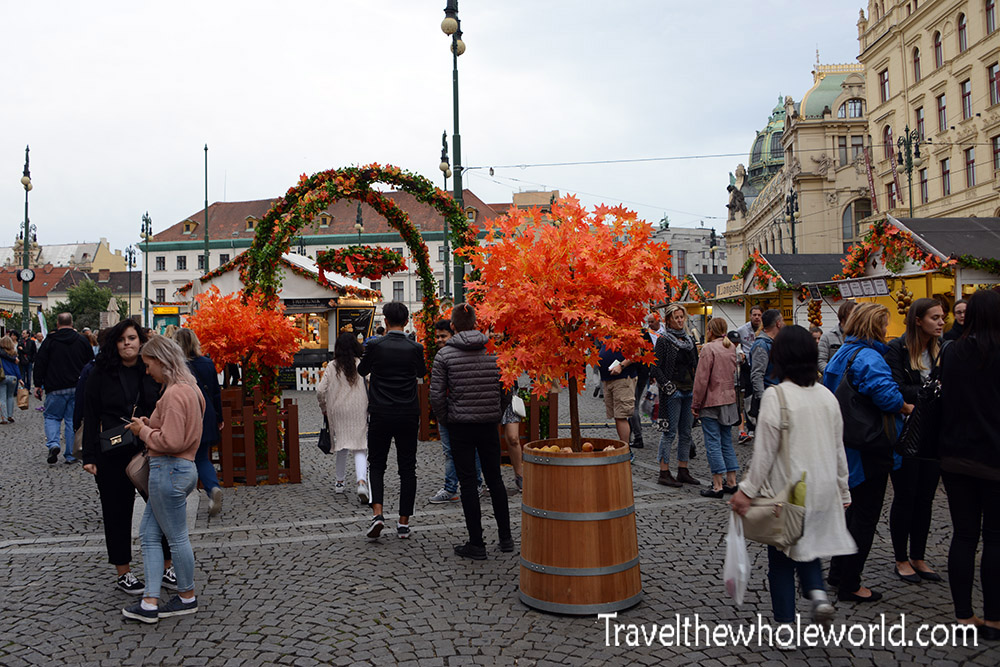 Somewhere during my random city hike I came across this fall market. I should have bought something from here I feel, but after spending money at so many other places that I had eaten at I was full. The market of course had all types of autumn themed foods and goods, and for some reason in the middle of it all this blacksmith hard at work. 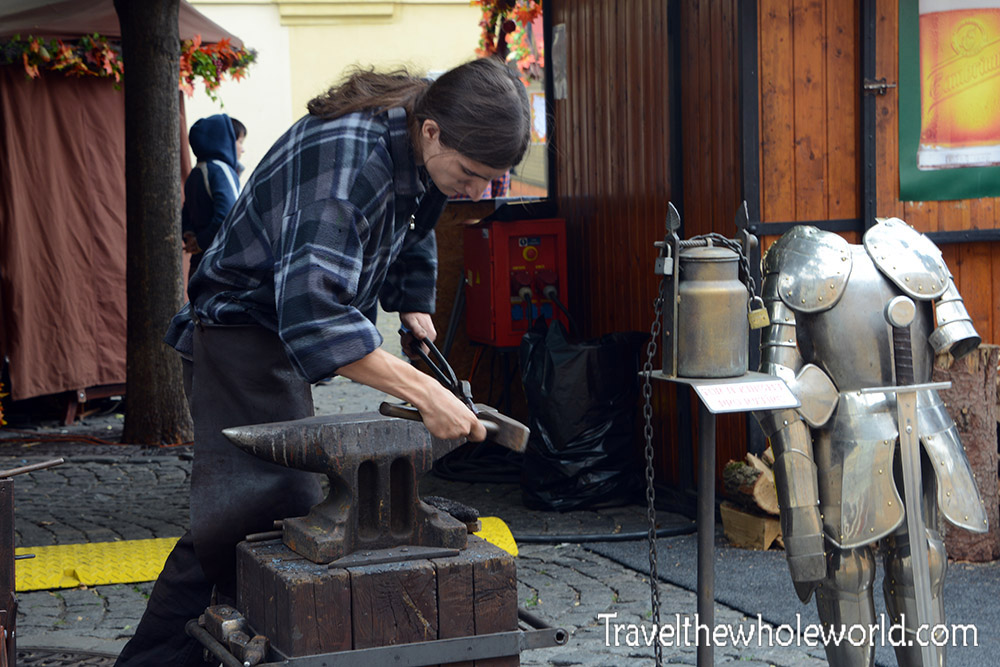 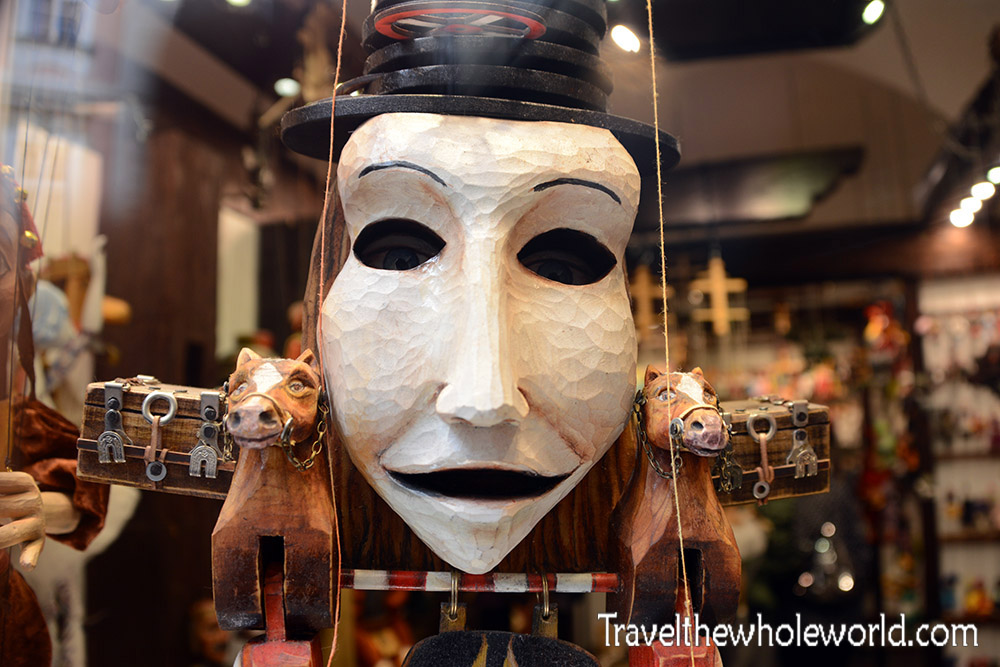 The shops in Prague are also pretty unique. It’s one of those cities where you can find just about anything you’re looking for. There were plenty of high end classy shops, but unlike their counterparts in Switzerland or Austria they were much more affordable here. And more than likely I’d even bet that the quality was just as good! I took this picture of a mask that got my attention in one of the shops I visited. 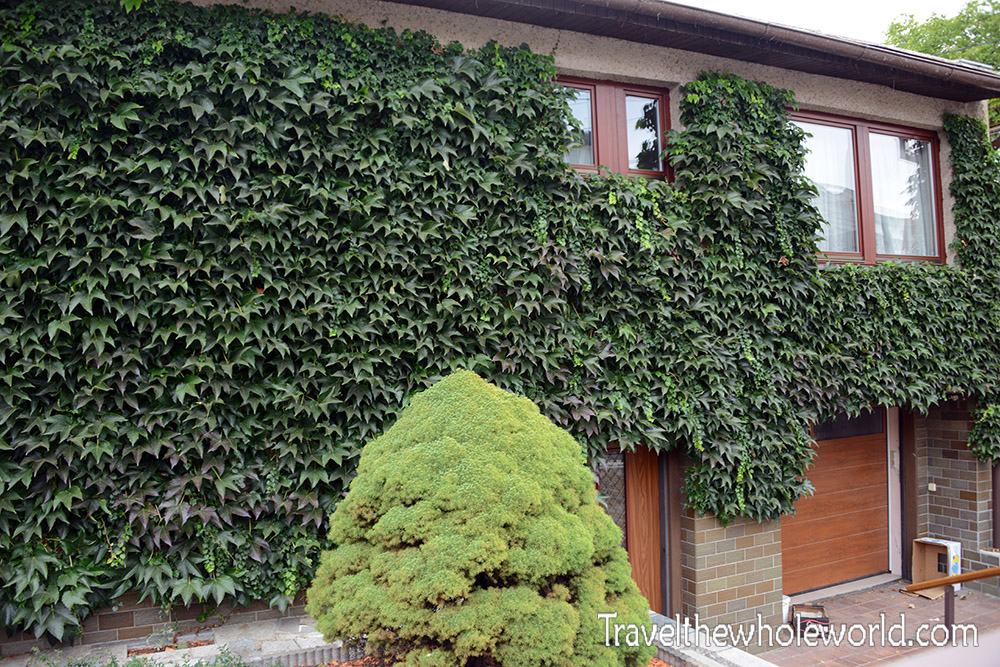 I wasn’t really sure where to share these pictures on this page, so lastly is this neighborhood where I stayed. My hotel was a bit far away from the city center, and more in a normal neighborhood. I’d assume these people are fairly well off, or at least upper middle class. The two houses that got my attention in the neighborhood was the ivy house, and this one that looked almost like a compound. 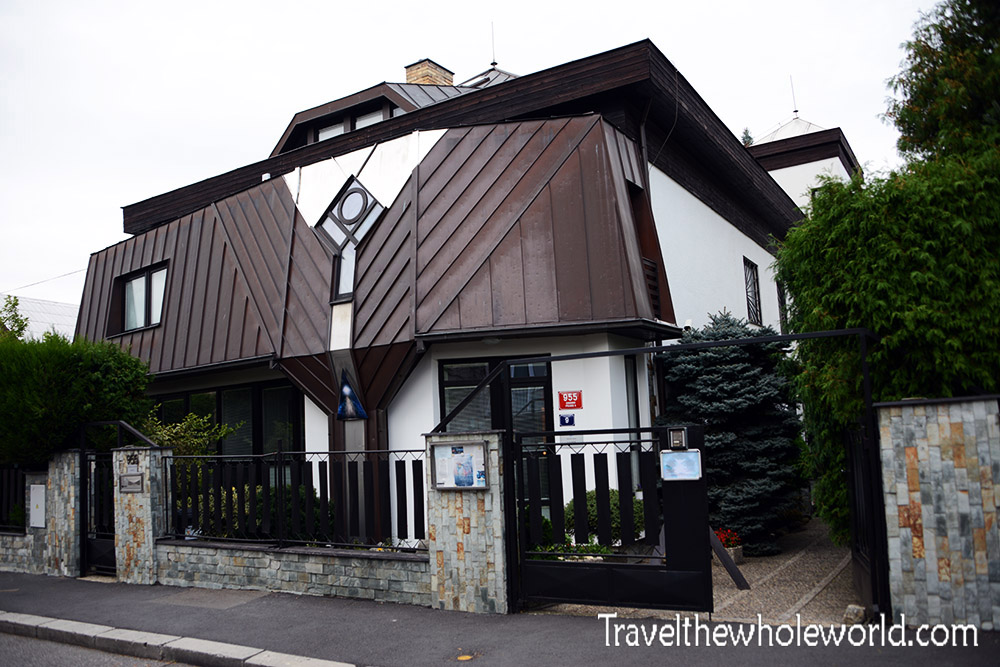