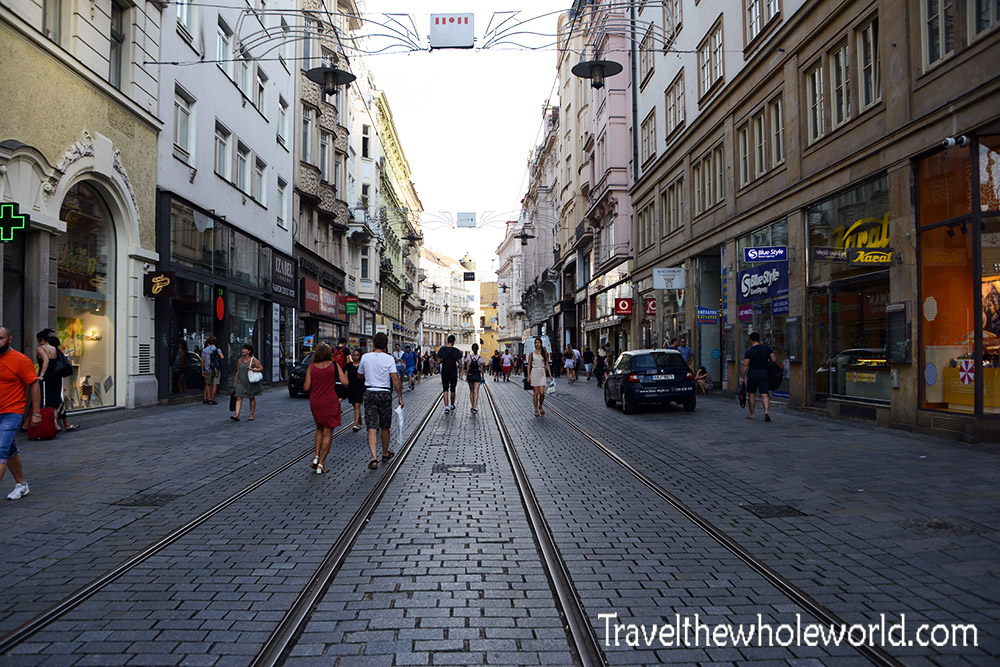 Czech’s second largest city of Brno isn’t well known to most of the world, but it’s definitely an interesting visit with a lot to see and do. Like most European cities, it has a beautiful city center lined with shops and pedestrians. 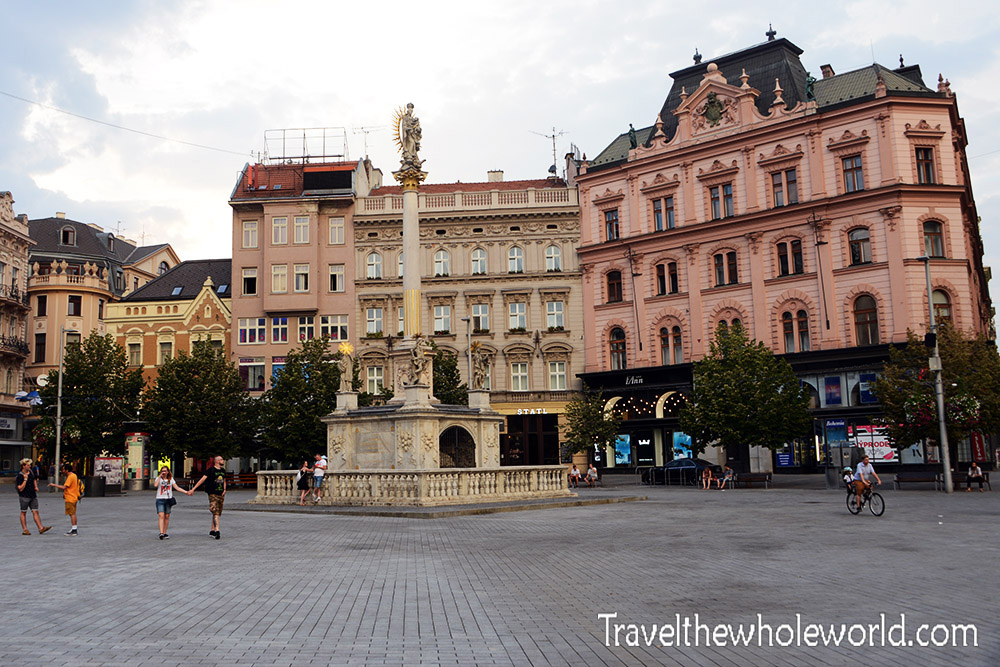 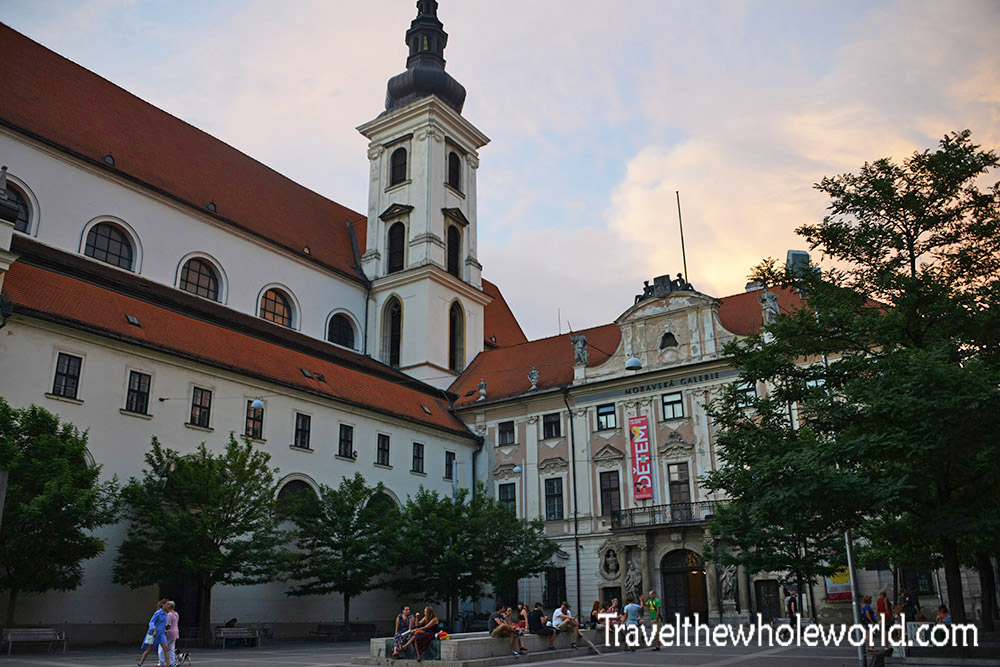 There are several square in Brno, photographed above is St Thomas Church within Moravia Square. The square here is also home to the locally famous horseman statue dedicated to Jobst of Moravia. The horse’s long legs gathered some negative attention when the statue first appeared, but my understanding is that locals have warmed up to it. 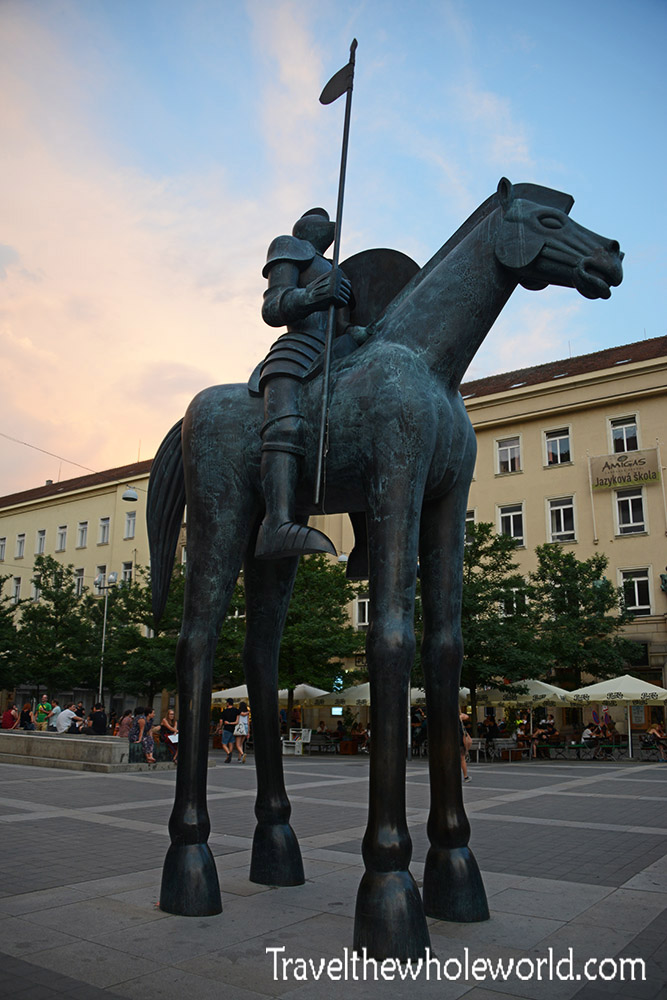 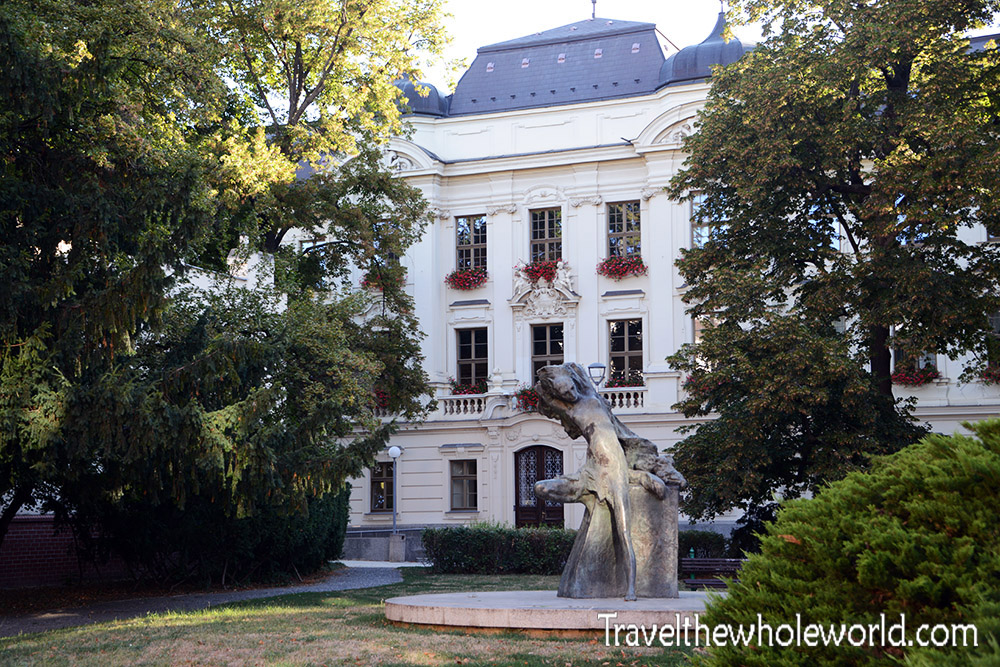 I’d say the rest of Brno is a pretty typical European city, except for their underground. While you’re above ground there’s more restaurants and cafes than you could ever visit, and the architecture is beautiful in almost all parts of the city. I believe this building above to be a fancy apartment just outside the city center. 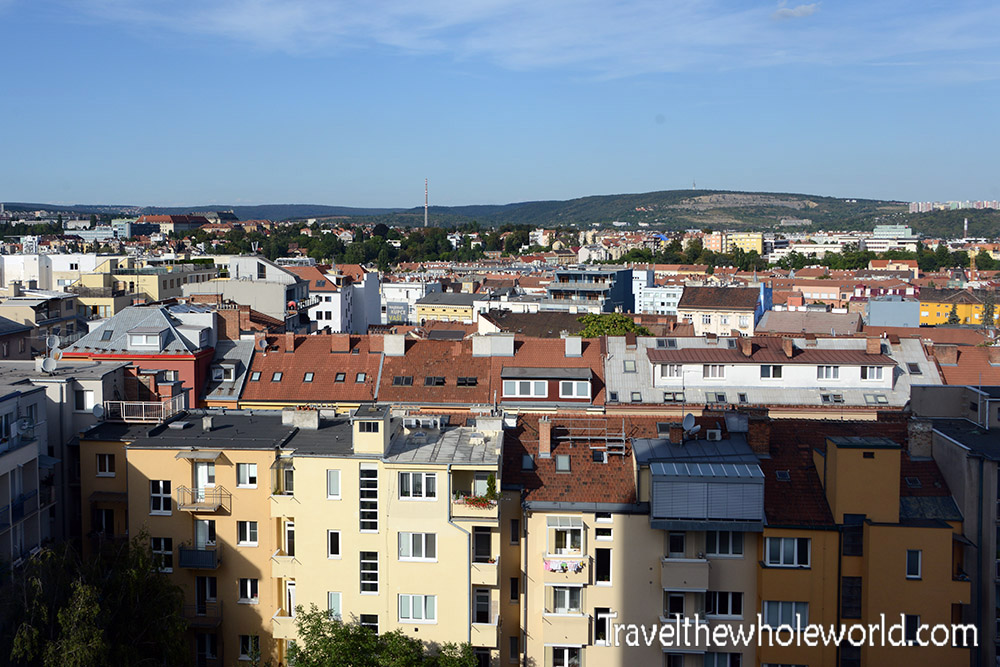 I stayed in Brno twice so far, once in the summer and again in the fall. I’ll definitely be returning multiple times in the future, and hope to even make a winter visit next time. This photo above is from my first stay, where I got a great view of several residential neighborhoods. The second time I visited, I stayed in a different hotel and woke up to an expected full rainbow. It was so big that my lens wasn’t able to capture it! 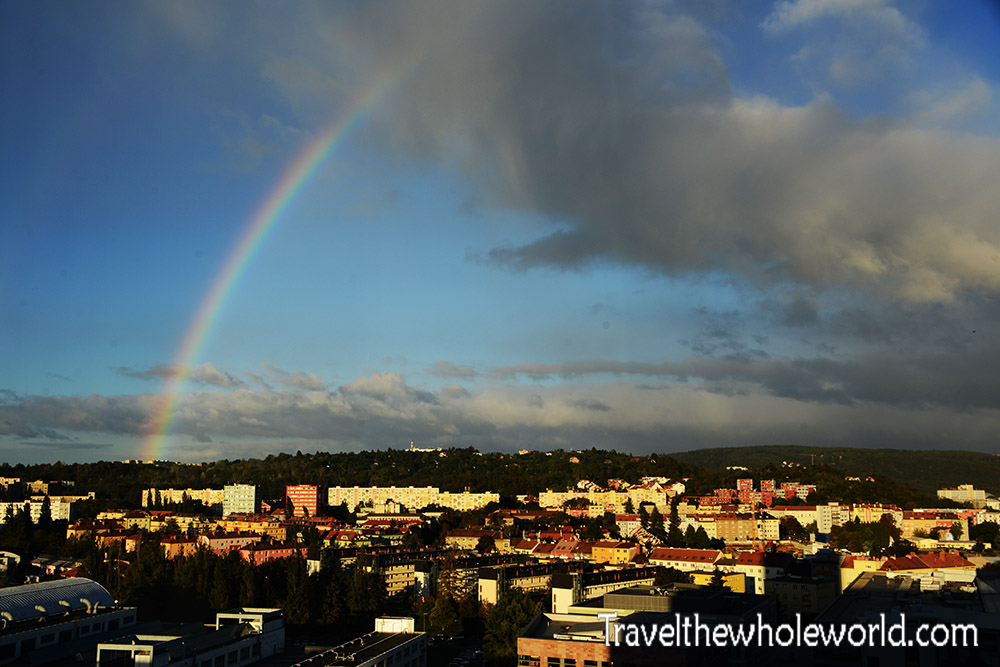 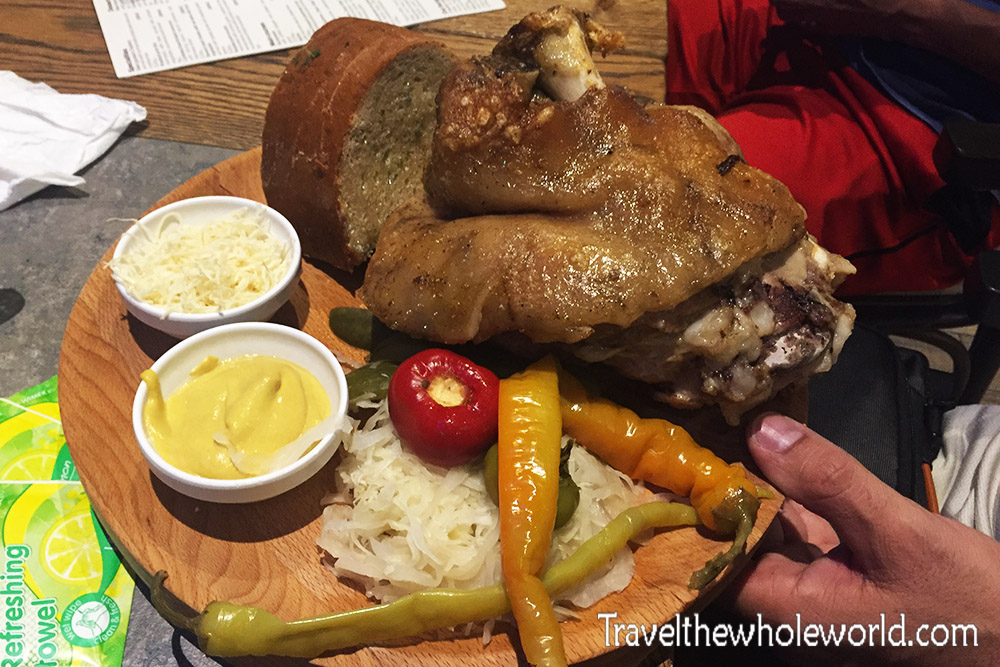 Maybe one of the best things about visiting Brno is that the prices here are still reasonably cheap. I remember some of my coworkers and I went out for drinks once and it was without exaggeration less than two dollars a beer! There were pretty big beers too, so if you’re goal is to party $10 could get you pretty far. The same goes with eating out. My friend ordered something off the menu not even knowing what it was and got presented with this monstrosity. 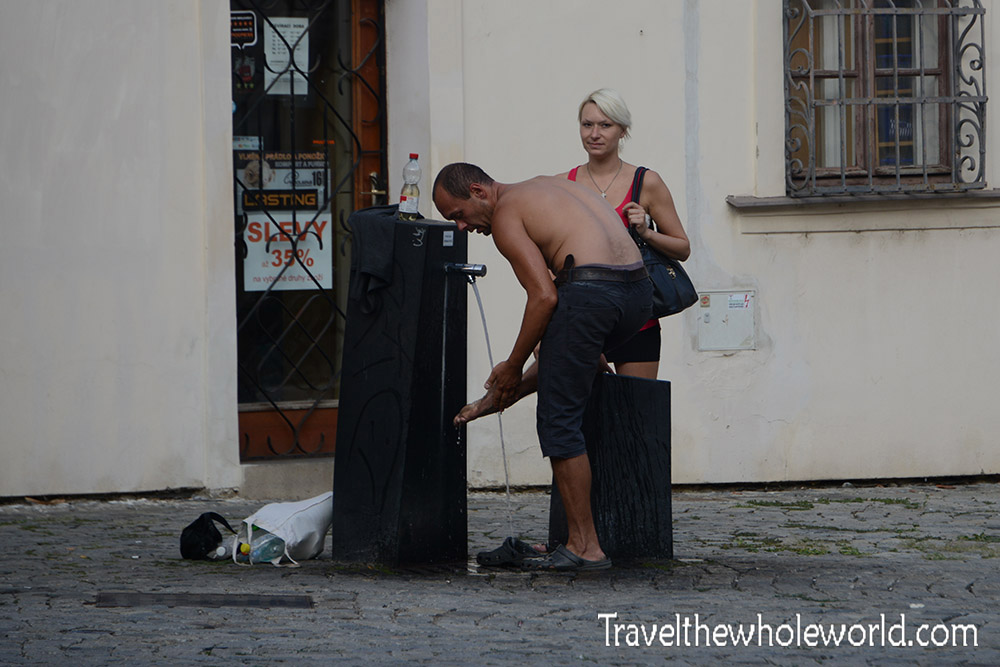 Brno is a pretty well kept city for the most part, but I couldn’t help but take a photo of this couple who was basically taking a shower in a central square with an audience. They seemed proud of their life style and went about their business as if it were totally normal. On one of the main streets, I noticed the gutters are nearly overflowing of cigarette butts and gum! 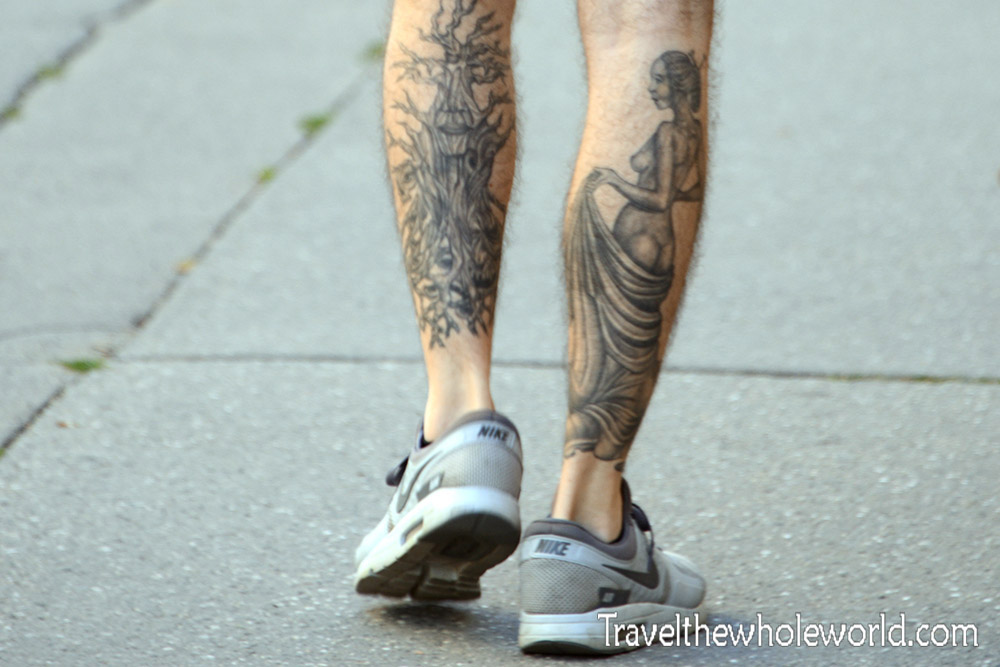 It seems lots in eastern Europe love spray paint and tattoos these days. Countries further south and east had way more spray paint than Brno, but I think Brno still topped with tattoos. 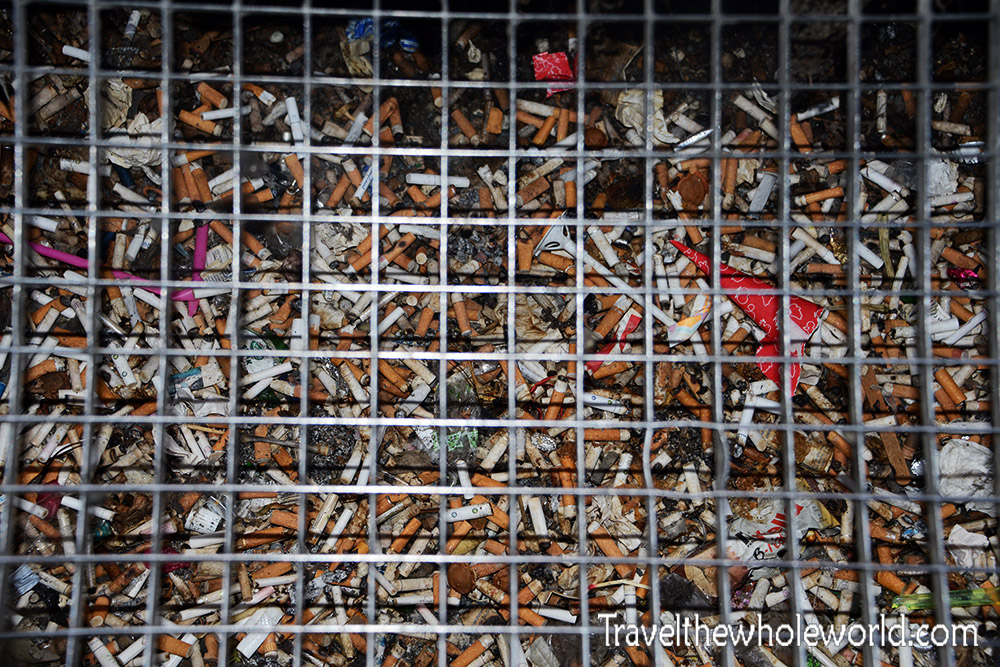 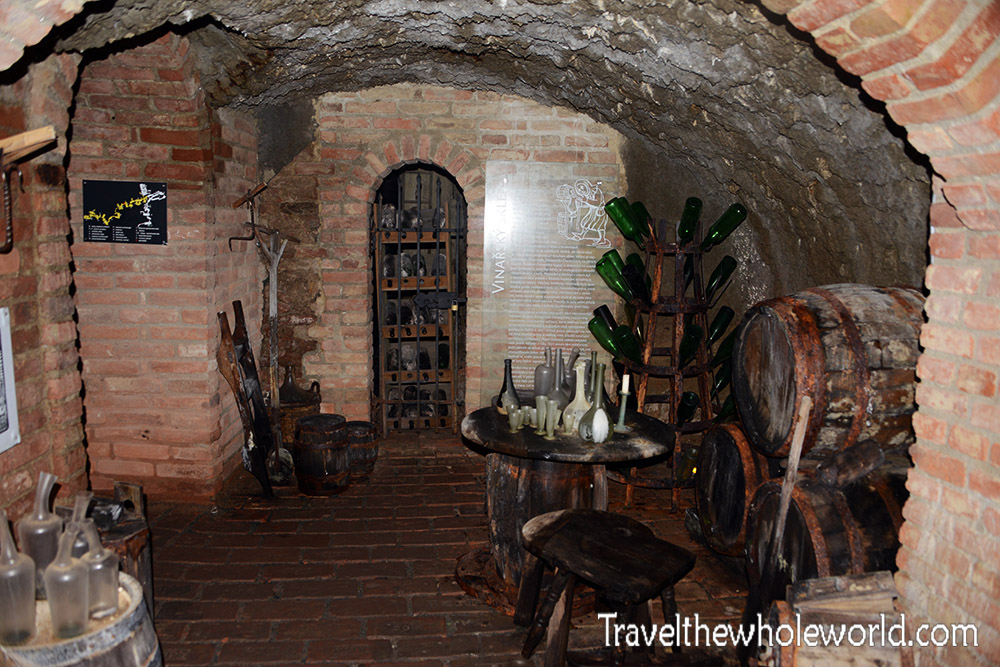 What’s most interesting about Brno is actually underground. Starting in the middle ages, people developed underground areas in the city in order to create breweries, as well as store food and wine. For the next few centuries these were constantly expanded until they created a network of tunnels and rooms. These weren’t even open to the public until 2011, so it’s a relatively new part of Brno that’s open to exploration. These two photos show what it may have looked like in its early days when it was stocked with food and beverages. 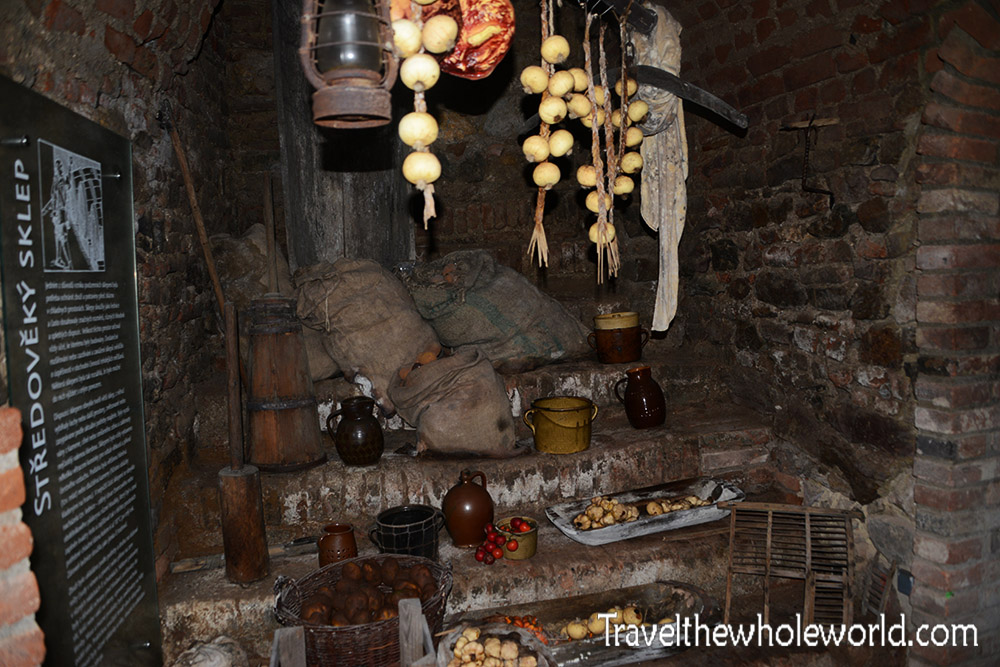 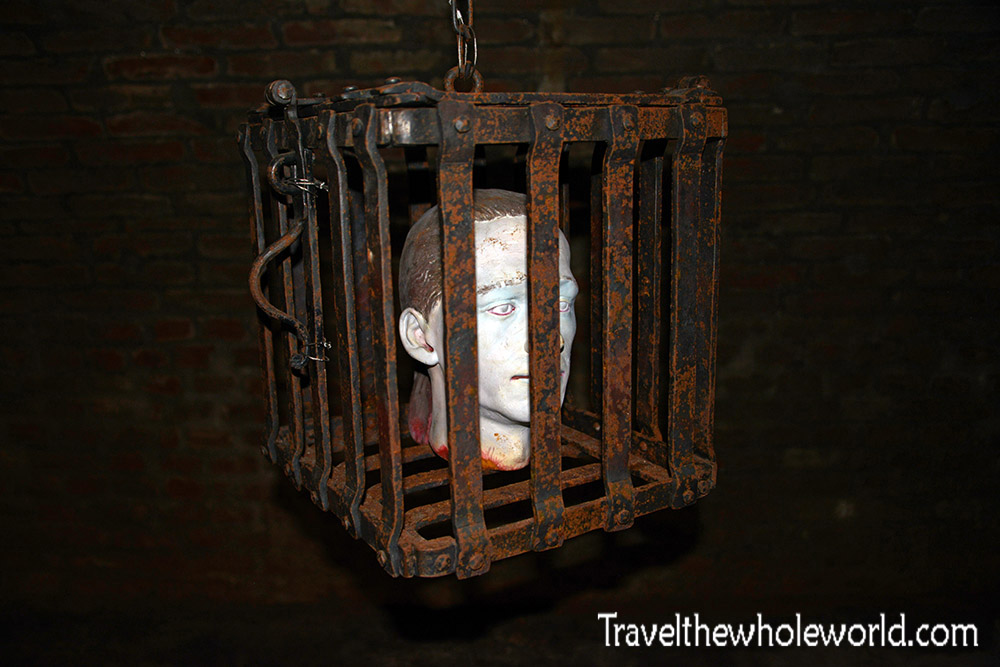 The labyrinths weren’t all about fun and games, several rooms here dedicated to torture. My understanding is that they put prisoners and people to be tortured in some areas underground the city. It almost seemed like a third of the labyrinth was dedicated to torture, and they didn’t make much of an attempt to downplay some of the atrocities here. I’m much happier to be visiting Brno in the 21st century versus the medieval times! 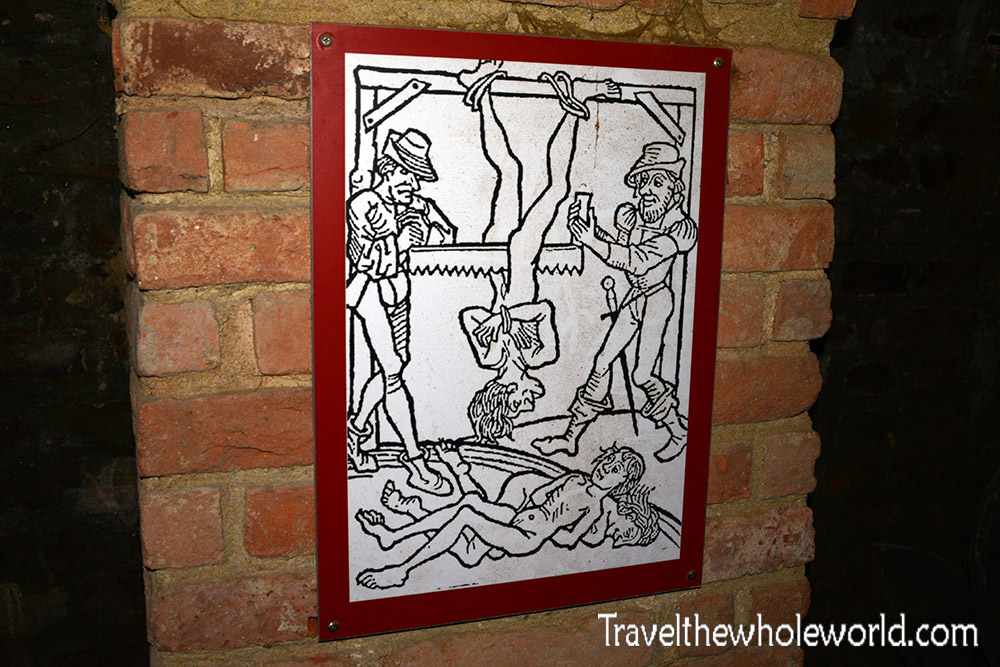 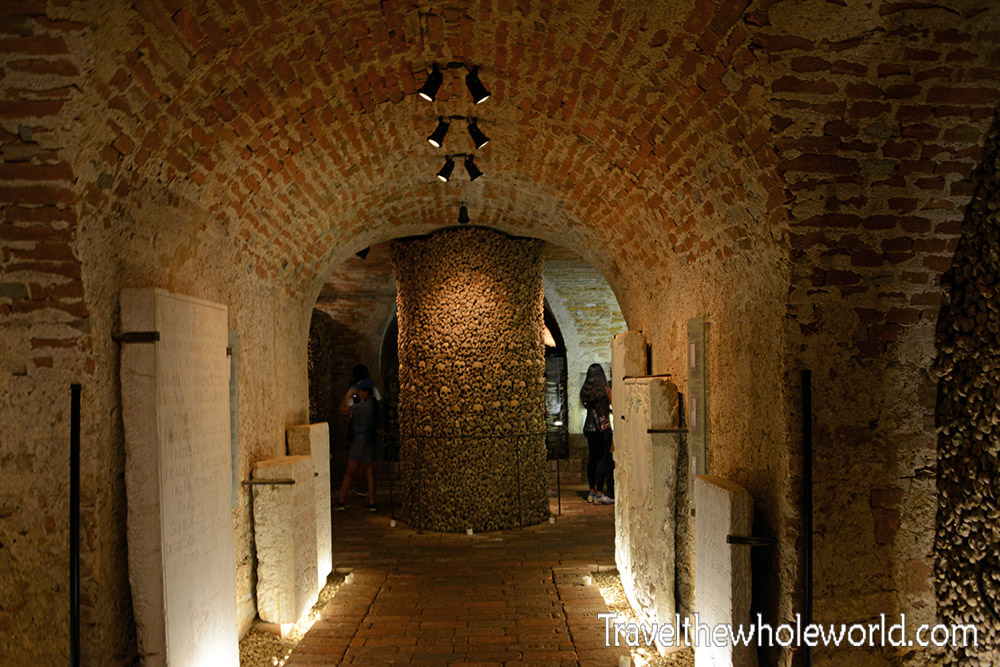 Speaking of torture, one of the most unique places in Brno is their ossuary. This is the second largest ossuary in Europe, second only to the massive one in Paris. What makes the ossuary in Brno especially unique is that it wasn’t rediscovered until 2001. People in the city were aware that there was once an ossuary here, but workers accidentally dug into it after it been forgotten for decades. If you’ve been to the ossuary in Paris, this one will pale in comparison regarding the areas you can explore. The photo above is the entrance, while below is some type of memorial to the dead. 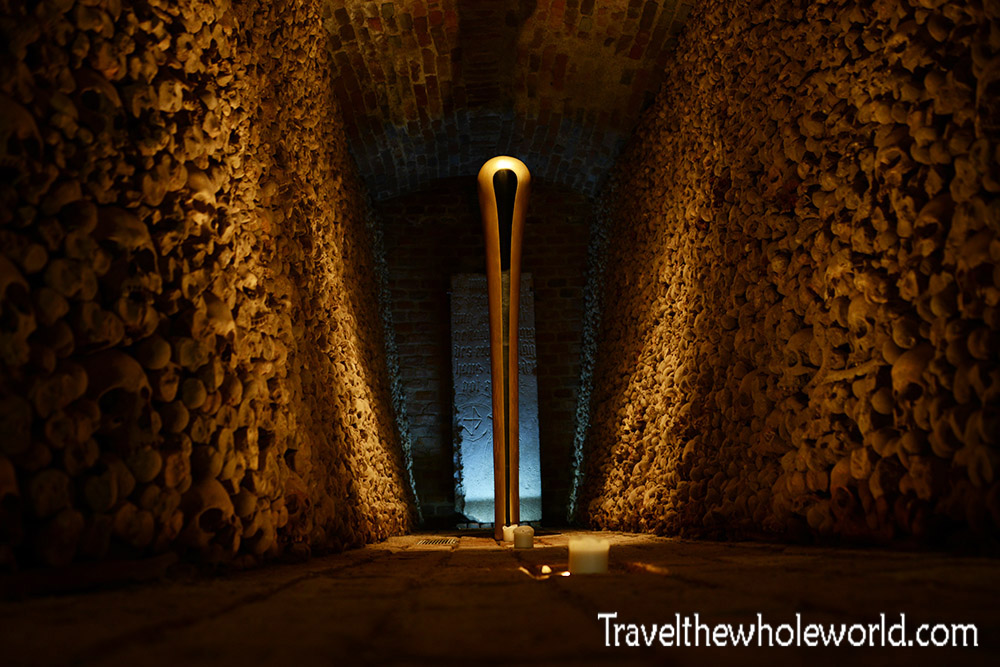 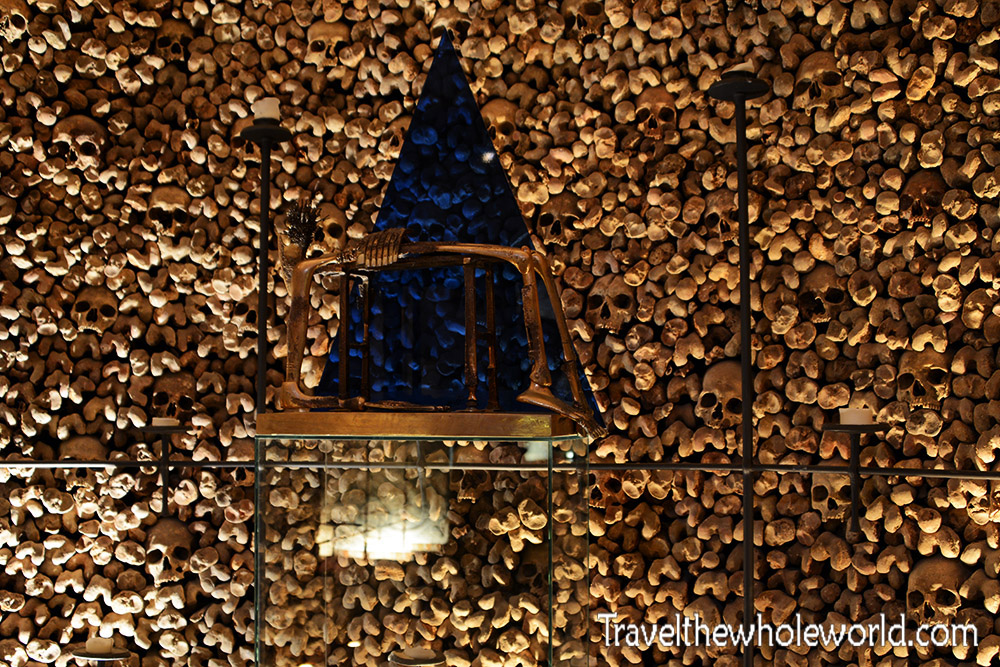 Like many ossuaries in Europe, those who discovered it cleaned it up a bit by organizing the bones. At first I thought it was a bit odd to decorate the place with people’s remains, but in a way it’s kind of a more respectful burial site versus a pile of bones I suppose. Like the ossuary in Paris, I found it strange that there seemed to be only skulls and femur bones, and I don’t recall ever seeing a pelvis or forearms for example. 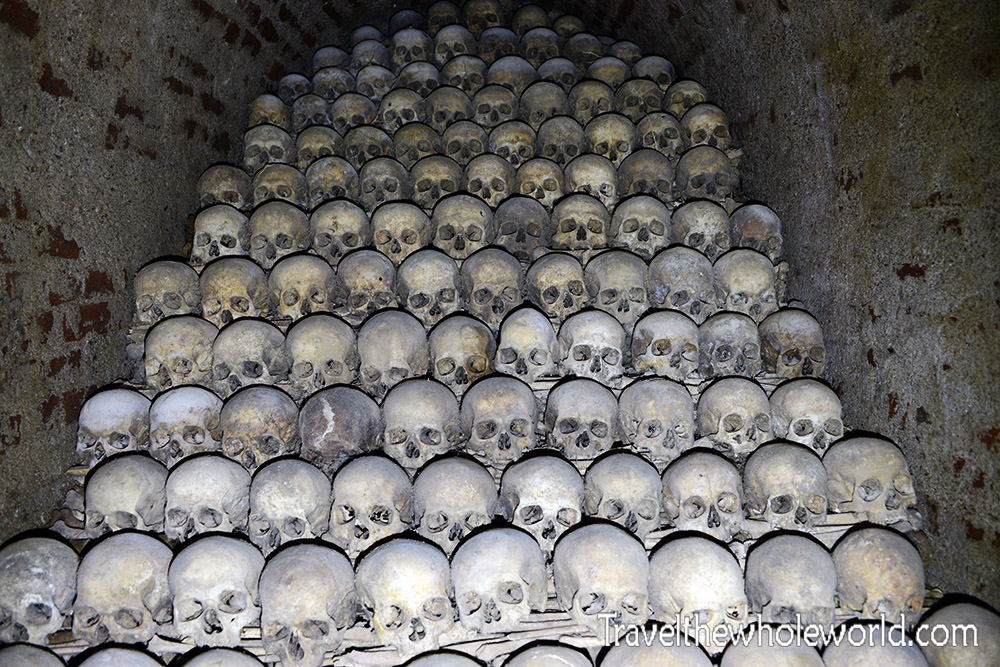 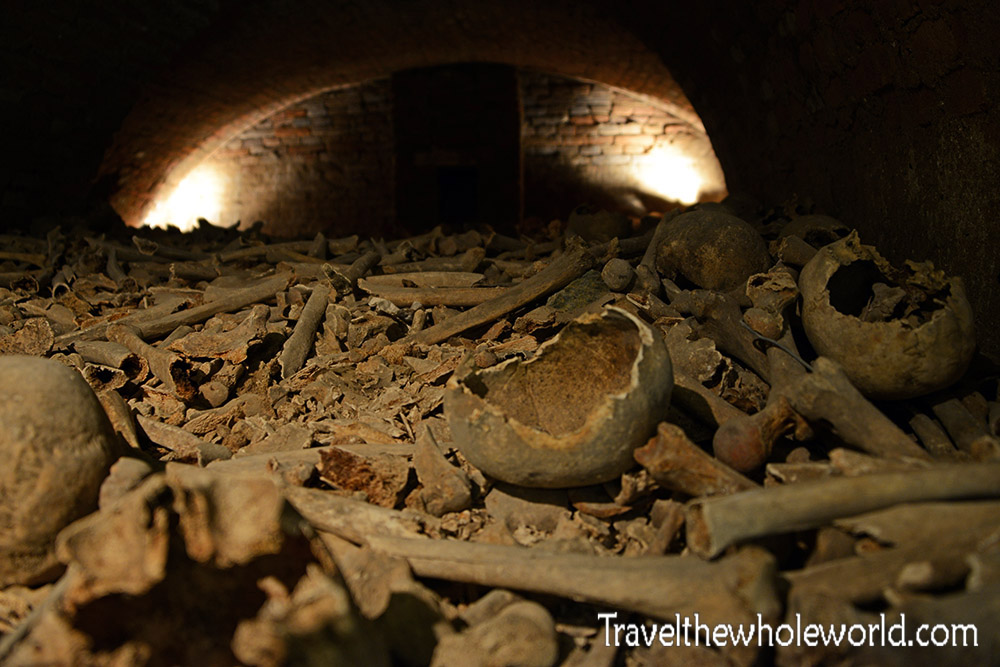 In this photo, I assume this is what the entire ossuary looked like when it was recently rediscovered. I’m still not clear on the cause of death for all these people, but I know it was created in the 17th century. The ossuary is home to some 50,000 people buried here, and most of them are organized with skulls and leg bones. 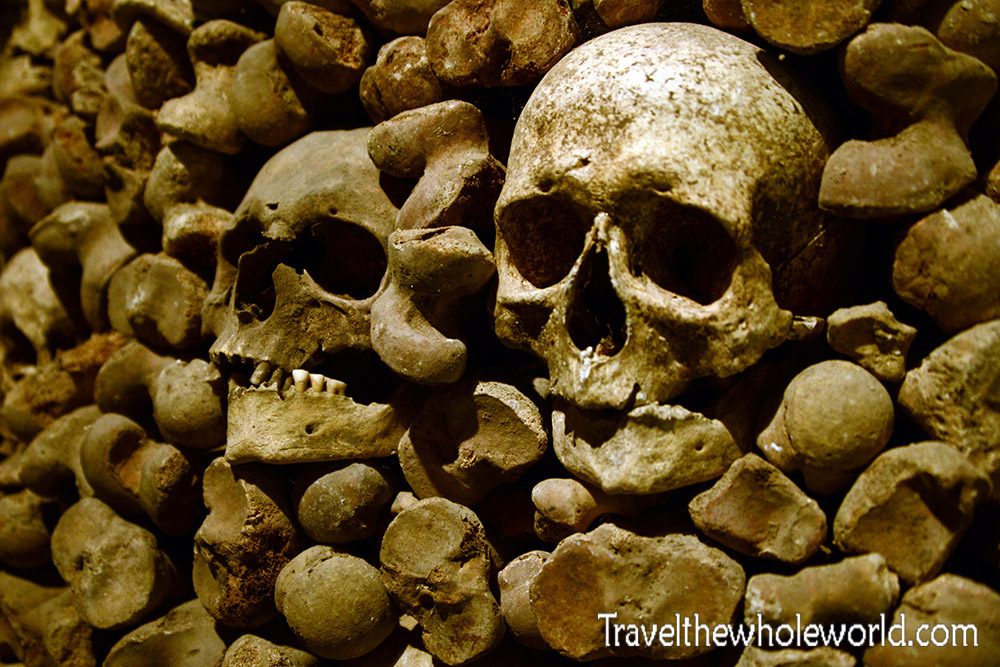