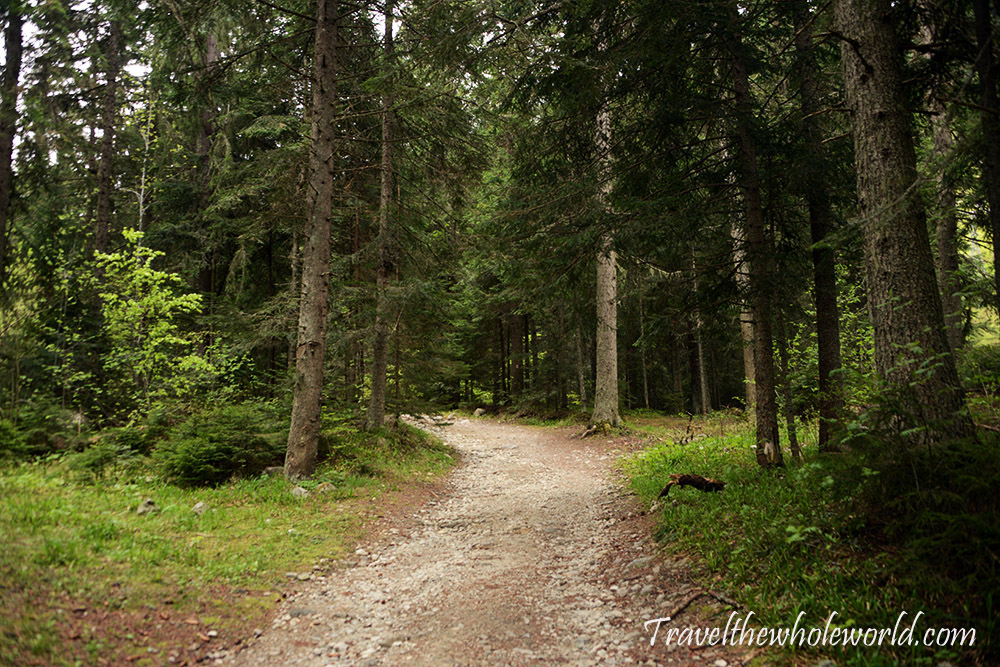 It wasn’t until I visited Bulgaria myself that I realized what amazing mountains they have. Bulgaria’s mountains may not top 10,000 feet (3,000 meters), but they otherwise offer all kinds of terrain and beautiful landscapes. While I was in the country I set my eyes on Musala peak, the highest mountain in Bulgaria as well as the Balkans. The hike started off at roughly 4,500 feet (1,350 meters) in thick pine forest. My hike took place in late May when the melting snows swelled the creeks and rivers at the lower altitudes. 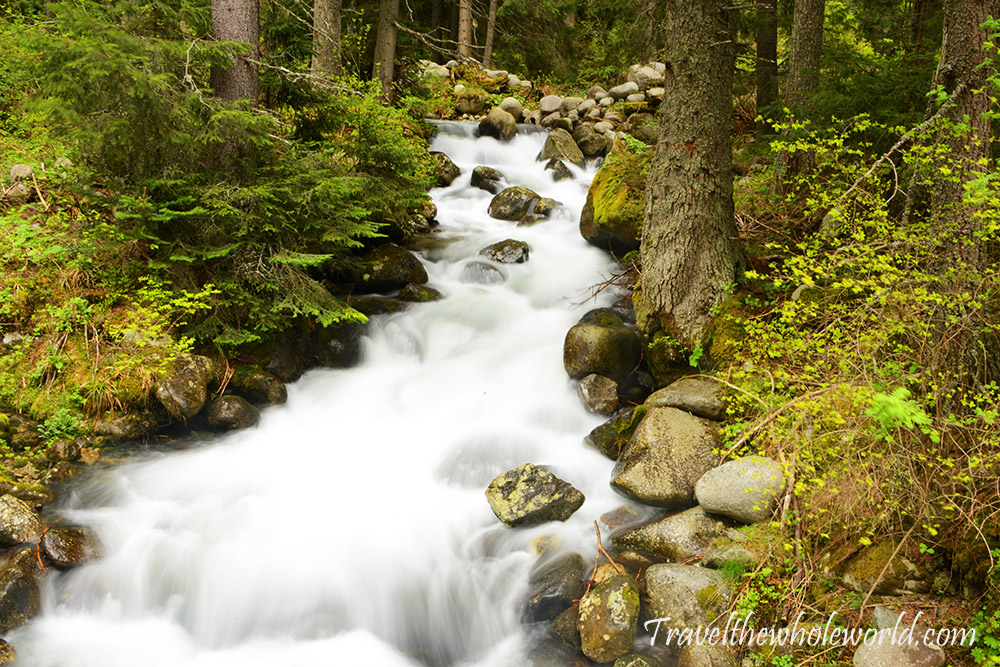 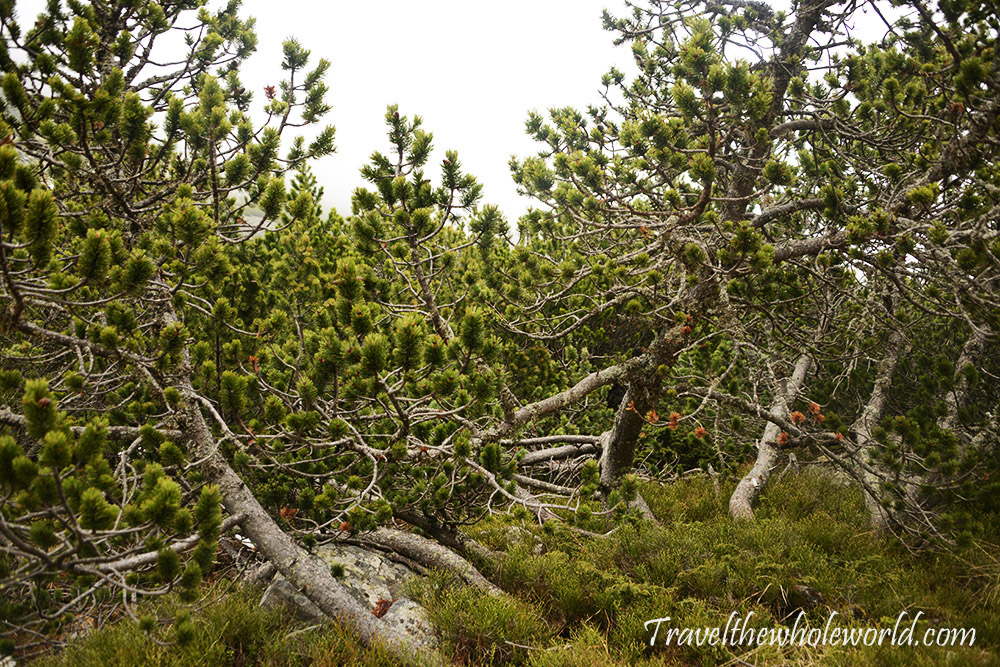 The winter brings skiers while the summer brings hikers and campers. During both of those times the gondolas are open that can take people half way up the mountain. Since I hiked in late May when it was a bit in between both seasons, the gondolas were closed and I had a 15 mile (25 kilometer) round trip hike ahead of me. As I hiked through the pine forest it didn’t take long to gain altitude and see the trees get smaller in size and new species of plants take over. 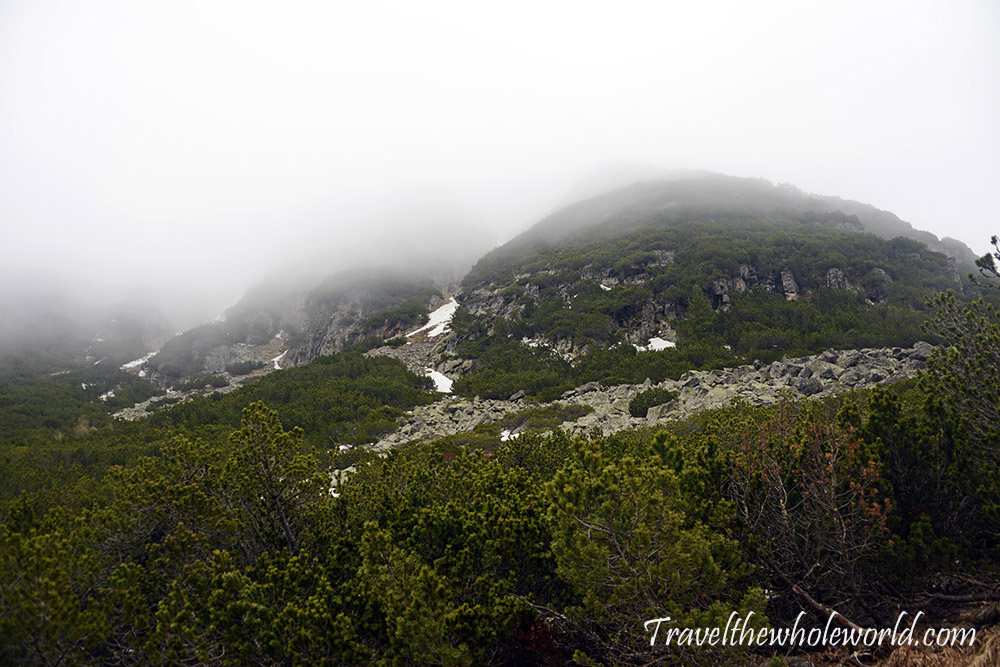 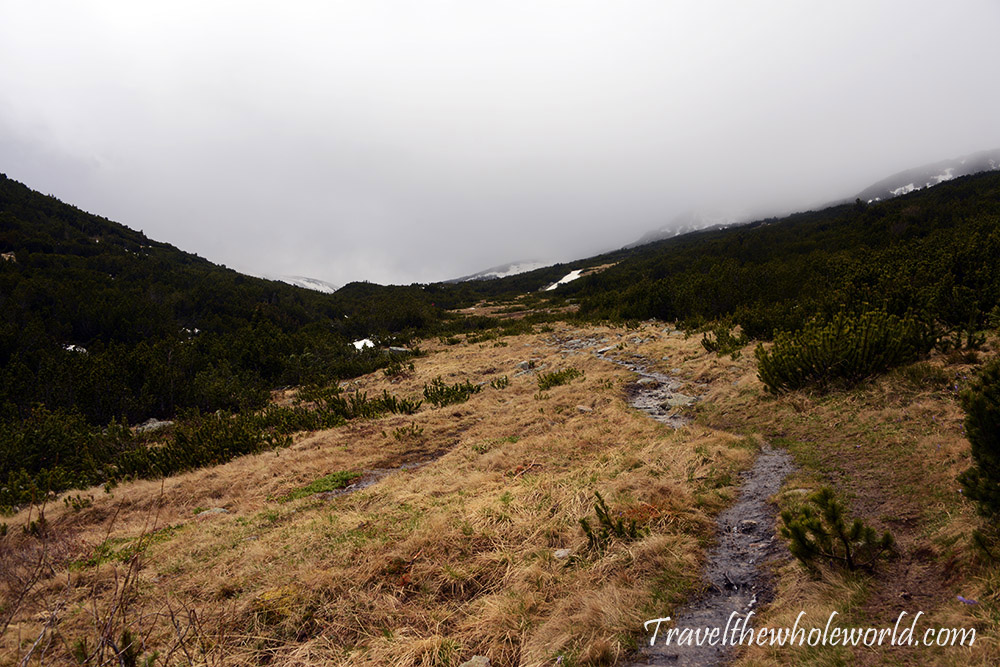 By the time I was over 6,000 feet (1,850 meters). The melting snow here was bad enough that it created annoying mud that was occasionally ankle deep. Soon after crossing the mud fields I saw the first significant snow. 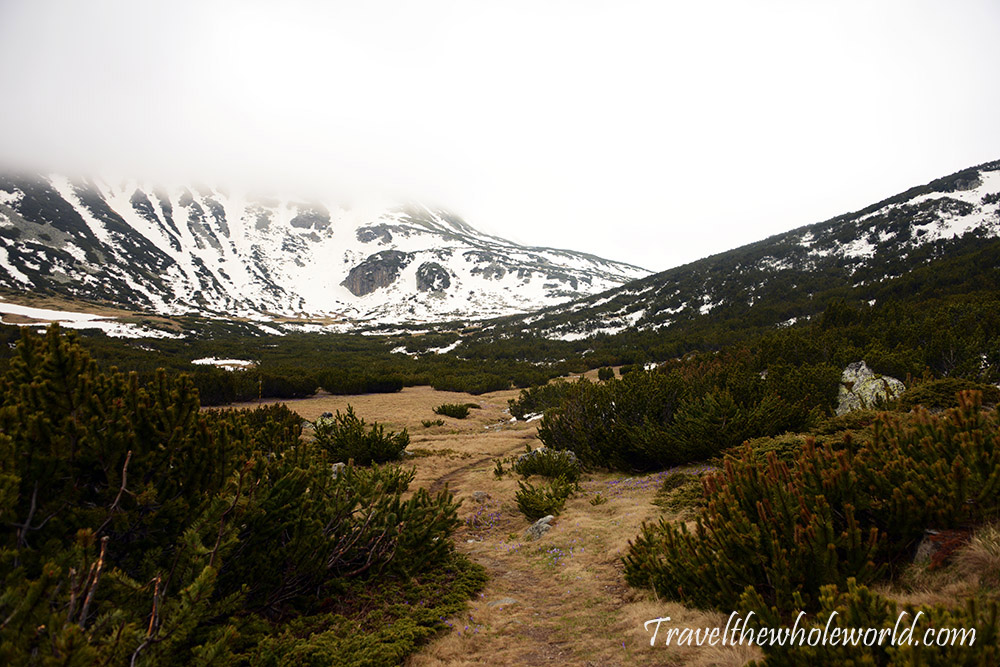 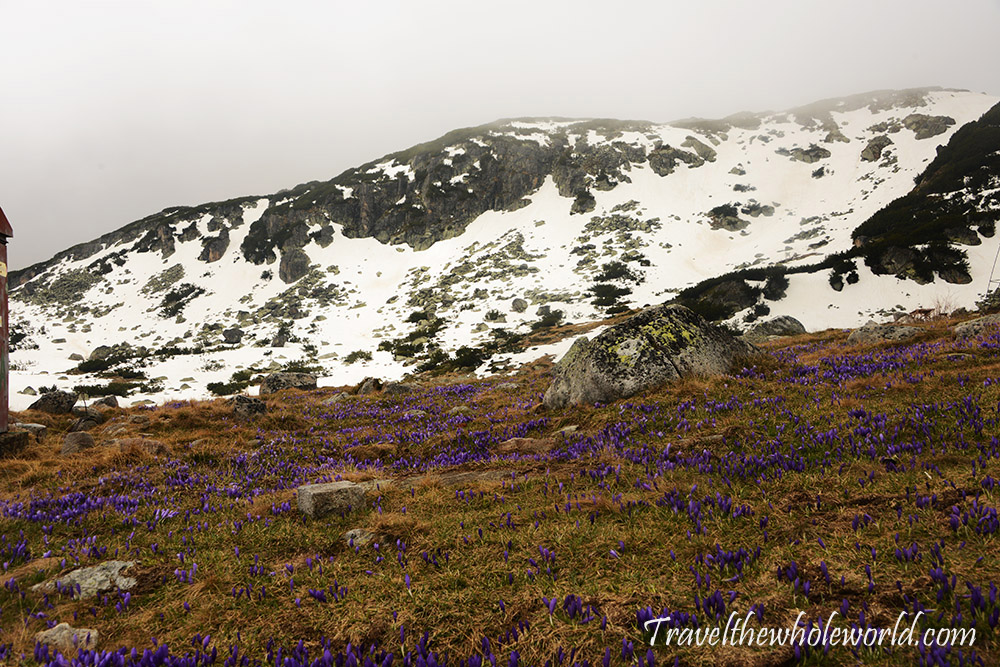 Even though I was surrounded by snow for the most part, the spring flowers were battling out winter as they fought their way up the mountains. A little bit more than halfway through the hike I reached several major huts, and at least one new one that was under construction by a large mountain lake. The Musala hut is the most famous hut along this hike, and isn’t too far away from where the Gondola would drop you off. None of these appeared to be open at the moment, so I hiked through the ghost town and continued towards Musala peak. 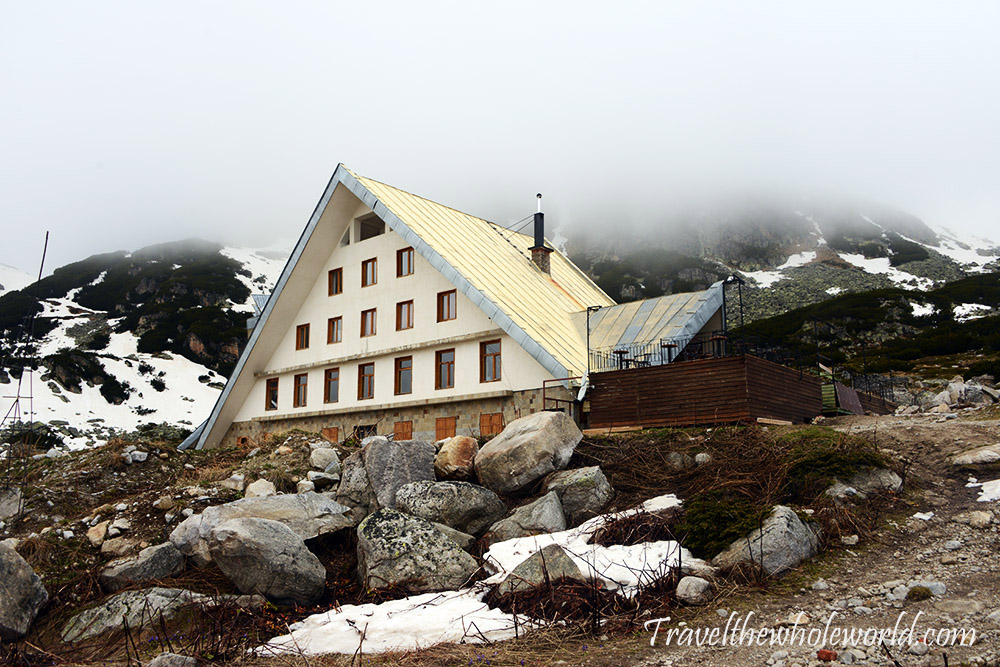 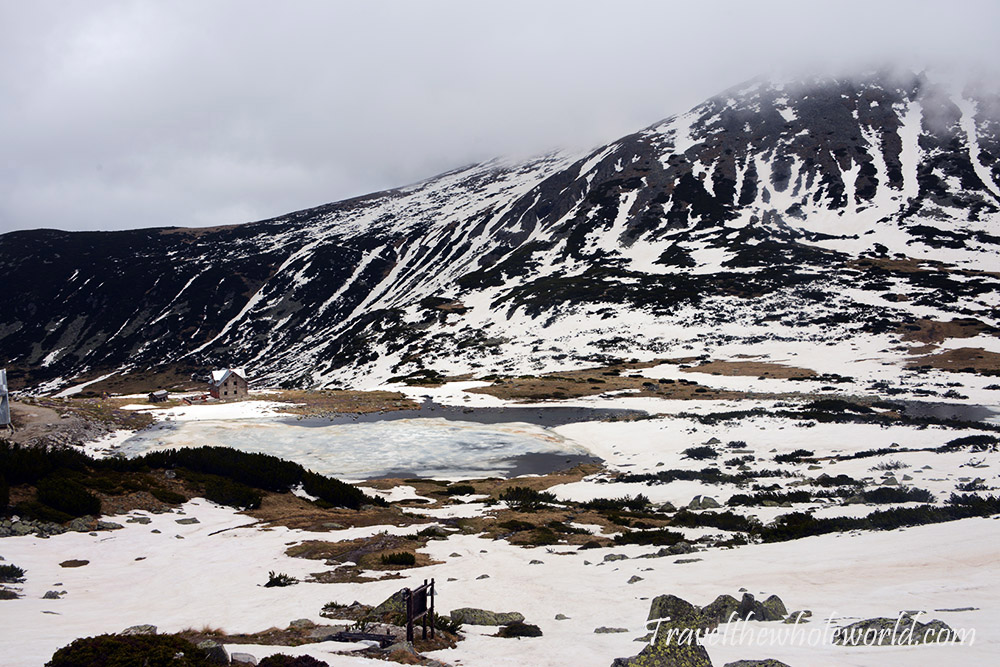 After the Musala hut I ended up on some steep terrain. I was told I didn’t need an ice ax for this climb, but it seemed silly not to use one on this kind of terrain. It wasn’t until my return descent that I realized I had gone up the wrong approach! Always happy to use equipment I hauled up the mountain however, so halfway up I stopped and took this photo looking back at the lake and the Musala hut. Another lake or two later I came across this beautiful view below. Around this lake the snow was quite deep, and for a few very short sections snowshoes would have been handy. 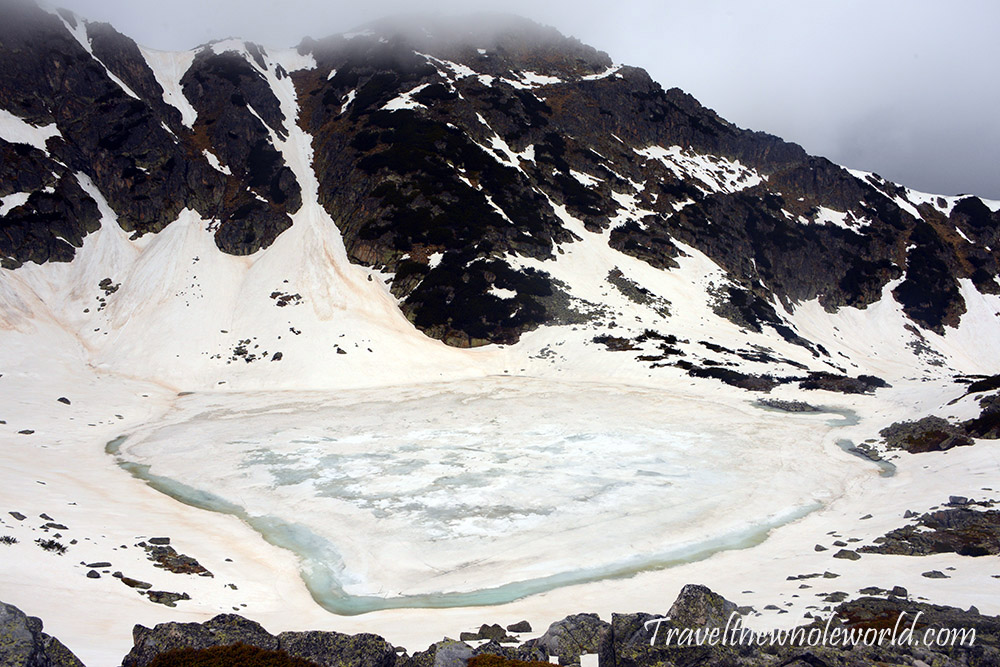 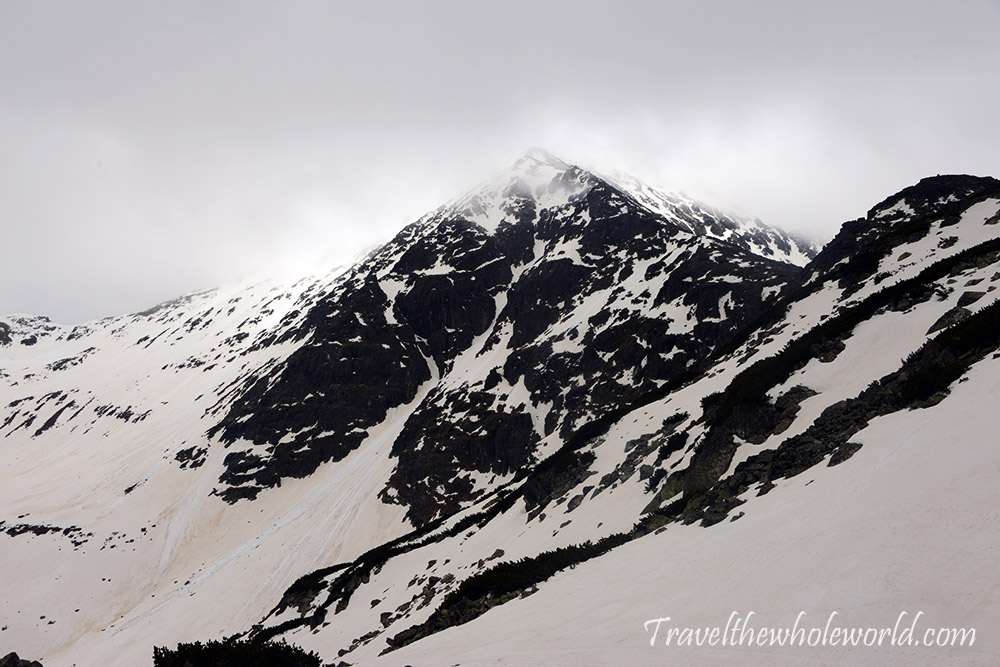 The mountain scenery continued to impress me as I gained altitude. Though Musala is the highest peak in the Rila mountains, there were plenty of other mountains to climb here, some of them clearly offered very technical challenges. This peak looked like it had a near vertical chimney rising through the middle of it. 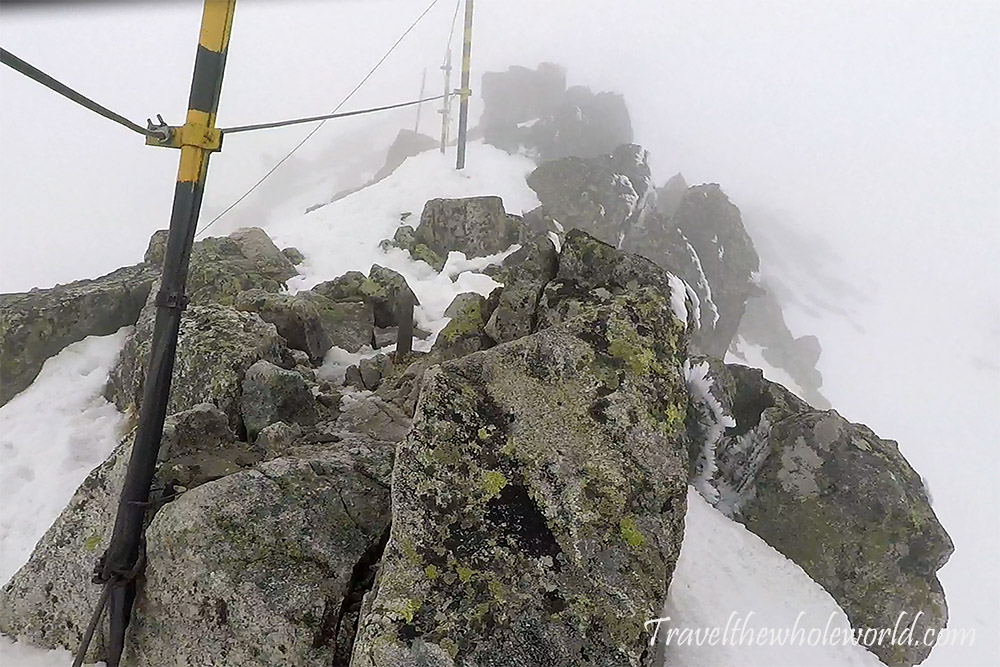 I was surprised to see yet another giant mountain hut when I got to the end of the valley. If these mountains where in Wales I would have been at the end of what they call a cwm, when you’re on a glacier surrounded by mountains on three sides. This mountain hut at the end of the valley was also founded by another frozen lake. From here I began up what is the only steep terrain if you follow the normal route to the summit. I was a bit disappointed they put these giant poles lined with cables on the route. Of course I tried to avoid using them and climb on my own. A few parts of the ridge were very narrow and it’s not possible to walk dead center because the cables. 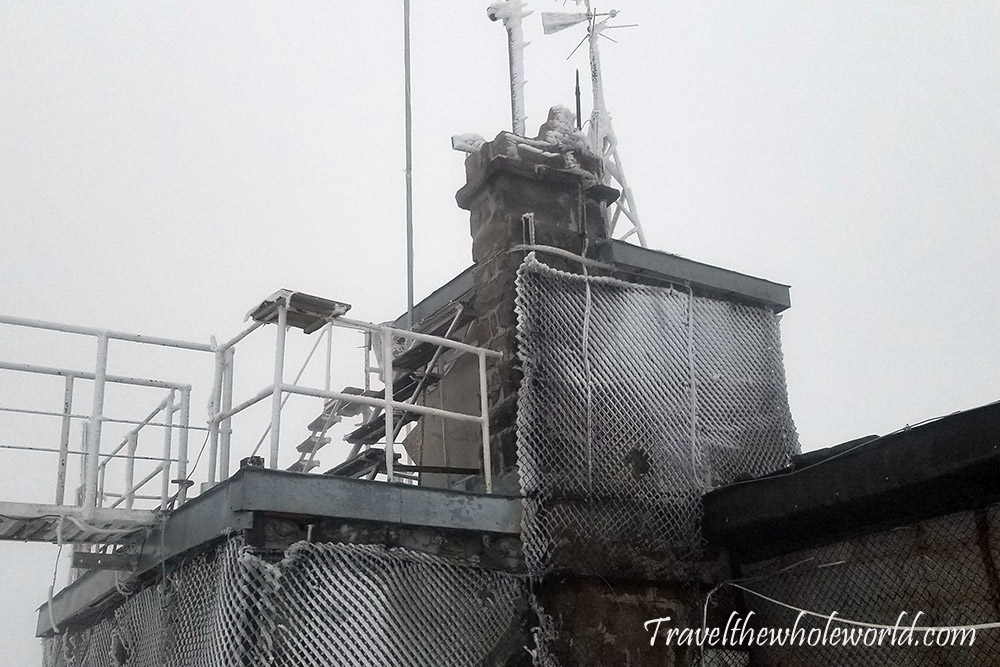 The steep terrain only lasted a few minutes, and then I was on the summit ridge. The ridge was a wide and gentle approach to the final part of the ascent. In the deep fog I wasn’t able to make out this structure from a distance, but when I got close it was obvious there was a weather station on the summit. I hadn’t known this thing even existed, and like Mt. Washington back in New Hampshire it was covered in rime ice. Since my main camera had died I was a bit annoyed when my GoPro was out of memory. I sat in the snow outside the weather station by this door below, trying to figure a way out to delete old videos. At some point the door swung open and a bearded man stepped out to smoke a cigarette. He seemed surprised to see me for some reason, even though I’m sure this place gets daily summits. 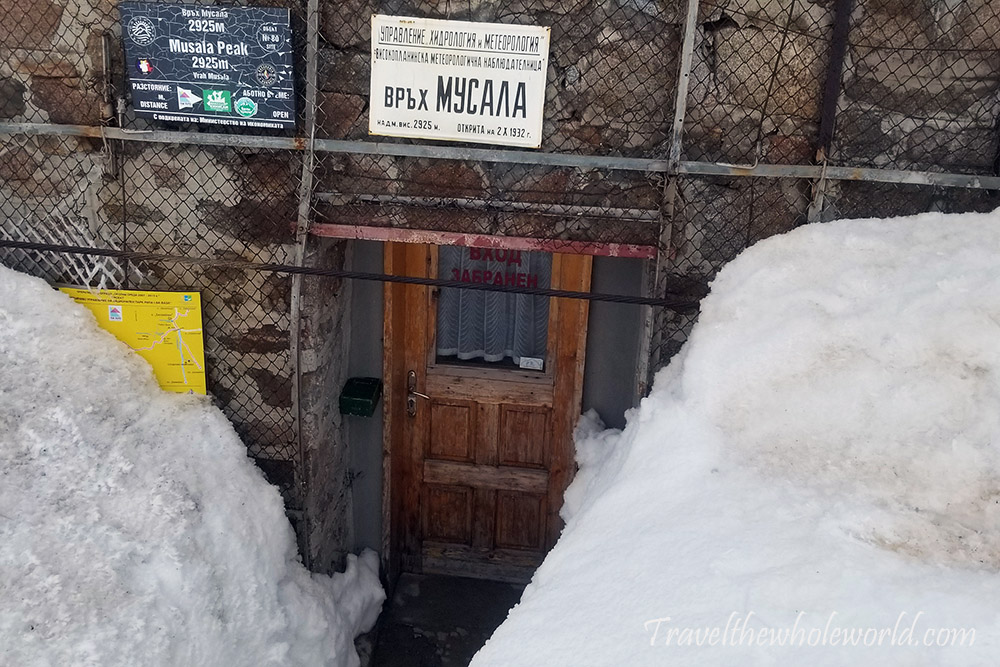 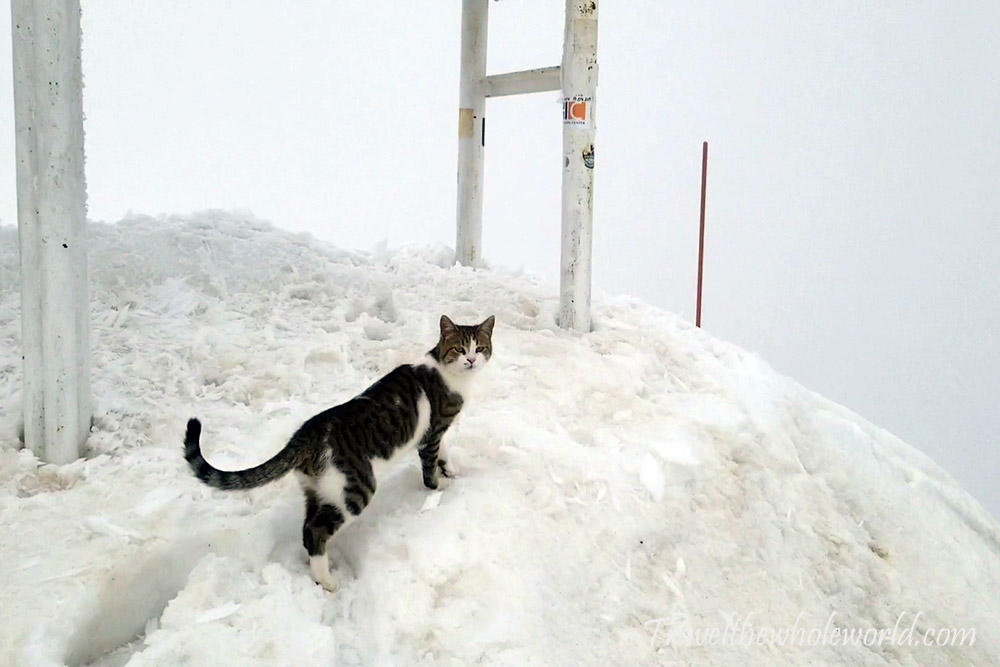 I was never able to clear anymore memory from my GoPro, so these two shots were taken with my phone. The cat clearly belonged to the weather station, but I wasn’t expecting to find it roaming around the summit! Below is a selfie I took at the top of the Balkans at 9,600 feet (2,925 meters). 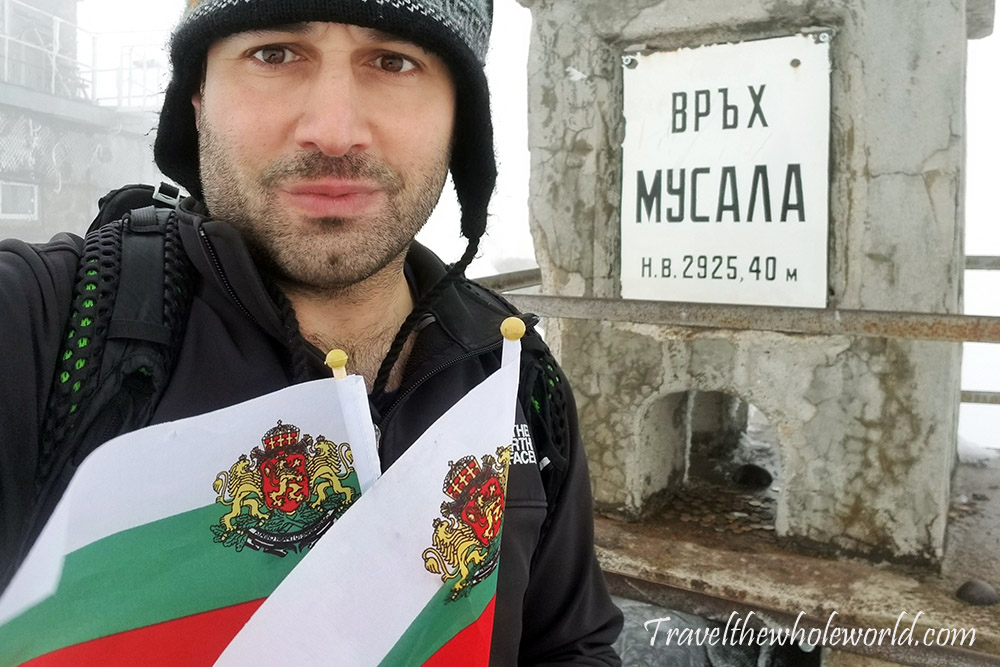