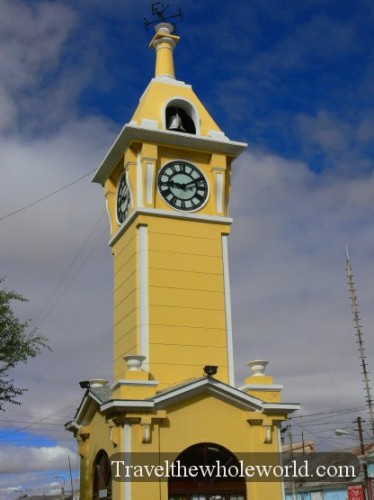 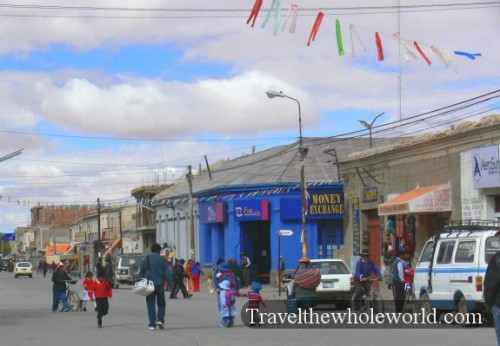 One of the most popular places to travel to in Bolivia is a town called Uyuni. Uyuni itself isn’t very interesting, but because there are so many popular attractions nearby there are plenty of places to eat and stay. 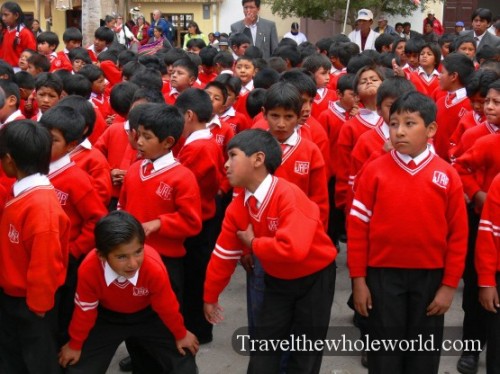 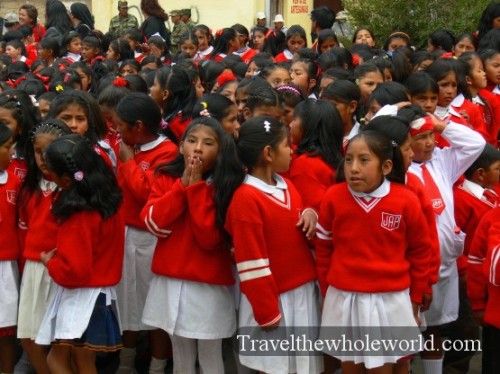 I’m not sure what the occasion was but when I passed through Uyuni there seemed to be a gathering of every kid in town out in one of the streets. There were some speakers set up and it looked like they were about to do either a little parade or some type of ceremony. Unfortunately I couldn’t stick around and I had to take off before I could see what it was all about. 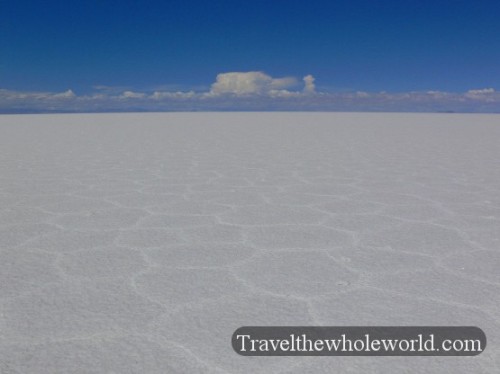 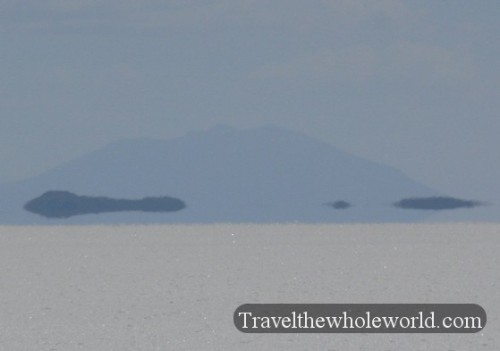 The main attraction near Uyuni is the large salt pan that is the result of a dried out lake, now the largest salt pan in the world. On the left you can see that it looks like the salt pans continue forever. On the right you can see some mountains in the background, with what looks like islands floating in the center of the picture. These floating islands are actually just mirages and are only smaller mountains. As you continue to approach the mirages, they will eventually go away and take their natural shape. 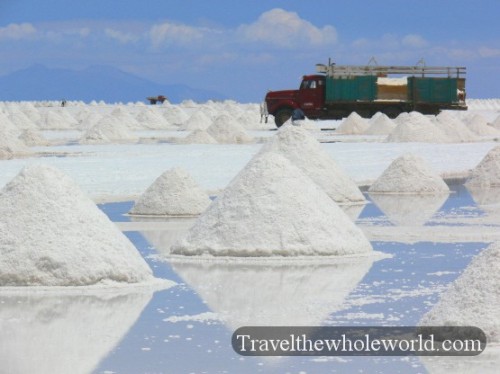 The salt pans are also a major industry for hard working Bolivians. Every day Bolivians put in long hours mining salt which has several uses in the country. On the right are salt mounds created by workers who shovel them into piles. If you stomp your heel into the ground, you’ll find it’s wet below the first layer of salt, so the mounds help the water drain out and let the salt dry. Later the salt is packed into the trucks and then taken to the factory such as the one on the lower left. There it is completely dried, treated with iodine and hand packed into bags like the worker below. Because this process isn’t with modern technology and mostly by hand, the salt doesn’t meet international regulations and therefore it can’t be exported to other countries. 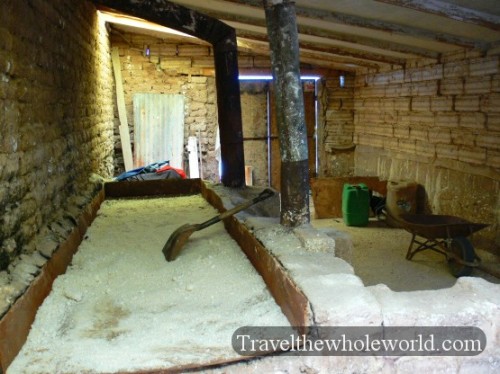 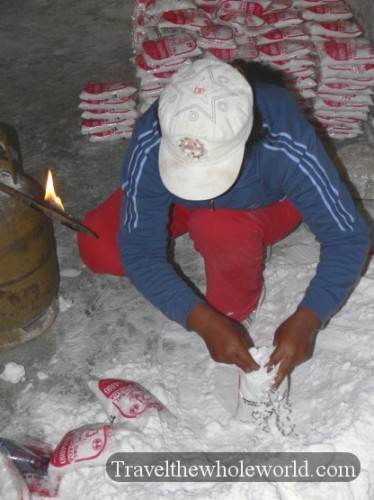 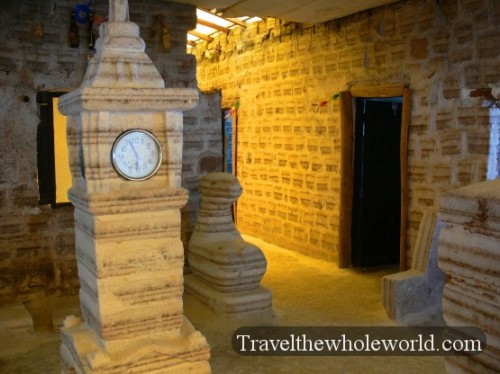 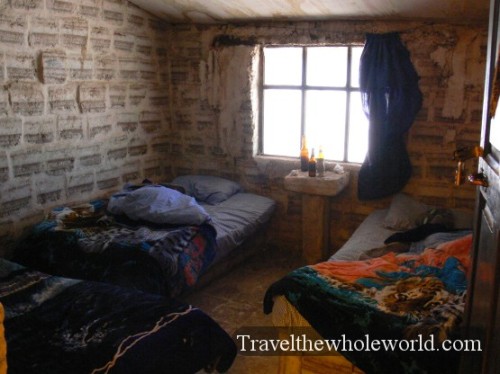 Some of the salt mined is used for construction, and is treated in a similar way like adobe bricks made from mud. These photos are from a hotel which is primarily made of salt. The walls, clock, and floor are all from salt bricks. 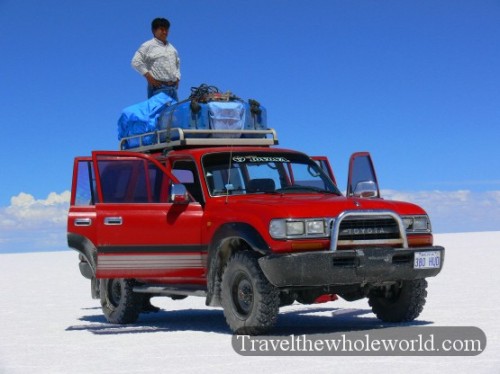 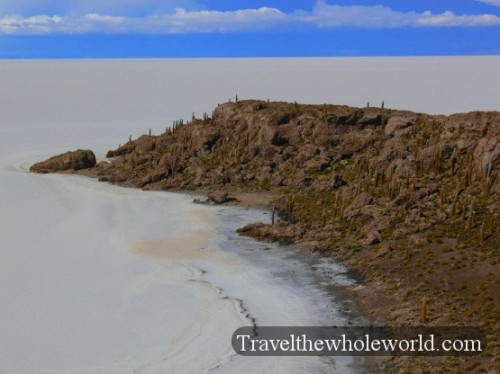 The tour I did through the salt pans and other areas was a road trip with a 4×4 jeep. An interesting stop in the salt pans is the Inca island which raises up to 80 meters above the surrounding terrain. The island gets its name because of Incas who were trying to hide from the Spanish conquerors and took refuge in the island. They were eventually all captured and killed, but the island was later named their honor. 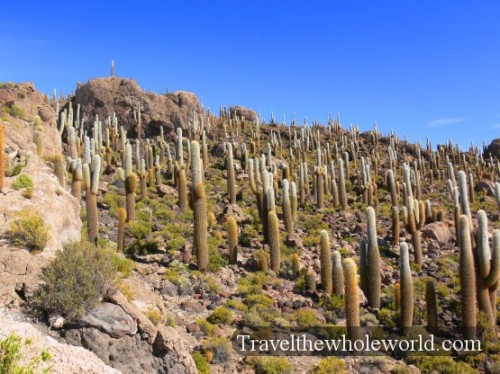 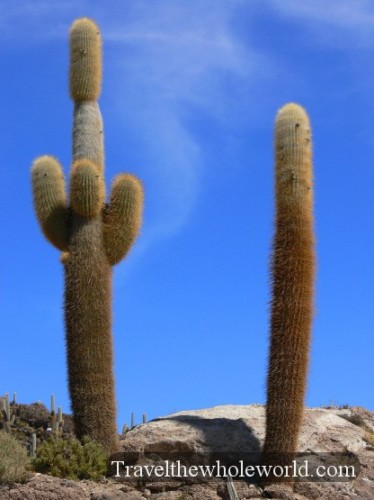 The Inca island is covered with giant cactus and is a dry desert. The large cacti you see on the right are actually of different sexes, the one of the left is female, and the one on the right is male. 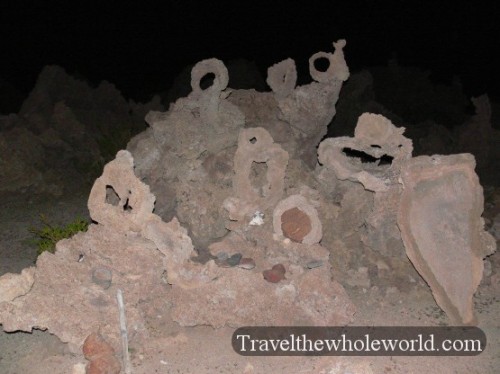 Outside of the salt pans in another part of southern Bolivia, I was lucky to get a local tour at night of some ancient cemetery. I didn’t really understand what I was going to see, but this was one of the most interesting parts of my trip to the country. First we came to some very strange coral formations in the desert. The guy with me said that this used to be underwater so they formed ages ago. The upper right block is actually hollow and he told me to look inside. 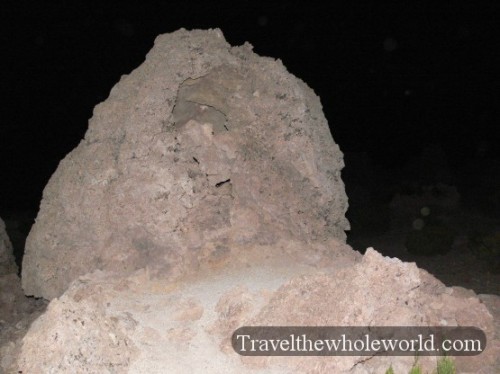 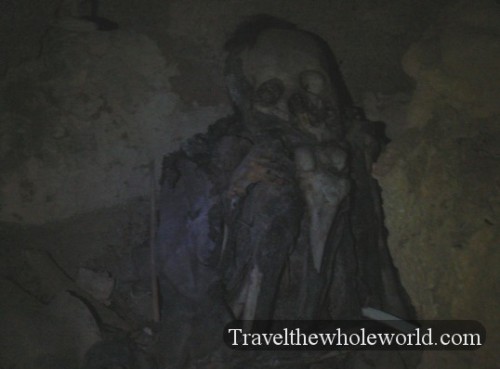 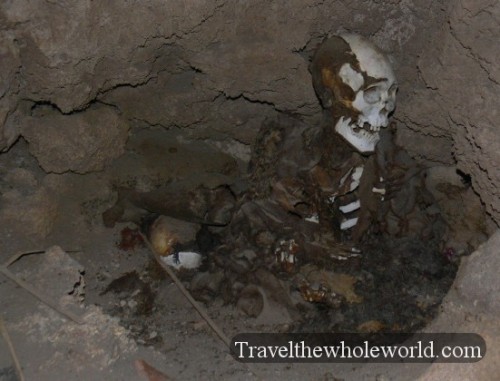 I looked inside the hole in the coral and on the left is what I saw. The dozens of strange coral formations were turned into tombs and all had skeletons inside of them. On the right is another skeleton from another coral formation, while most had only one body some of the coral formations shared two skeletons in one hole. I was told these skeletons were from after the Tiwanacu times but before the Inca. They were put into the coral formations and the holes were covered with clay which eventually eroded away. This place was only discovered a few decades ago, and initially all the tombs were broken into to search for treasure. I’d assume that they were buried here after they died, but look at the first skeleton on the upper left. He has is back against the wall, knees to his chest with one arm around his legs and a hand on his right knee. There is no way dropping a body in a hole is going to land like that, so either he was propped in the position or was buried alive and sat like that until he finally died. This area doesn’t seem to be known to archaeologists so I couldn’t find out any more reliable info online.