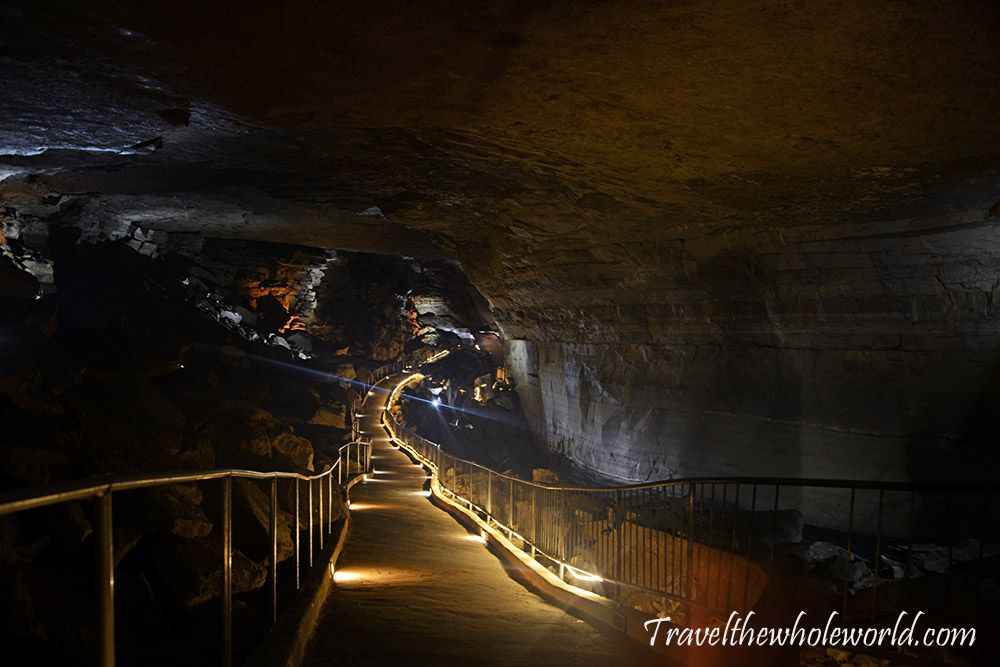 Who would have though that the Tennessee and Alabama region boasts thousands and thousands of world class caves! Cathedral caverns is just one cave system that has been bringing in people since the 1950’s. Originally it was privately owned, and has gone through a few owners until the state bought it and opened it to the public again in the year 2000. That’s not too long ago, but they’ve done a lot of upgrades to the infrastructure, including lit pathways that go for nearly a mile into the cave. 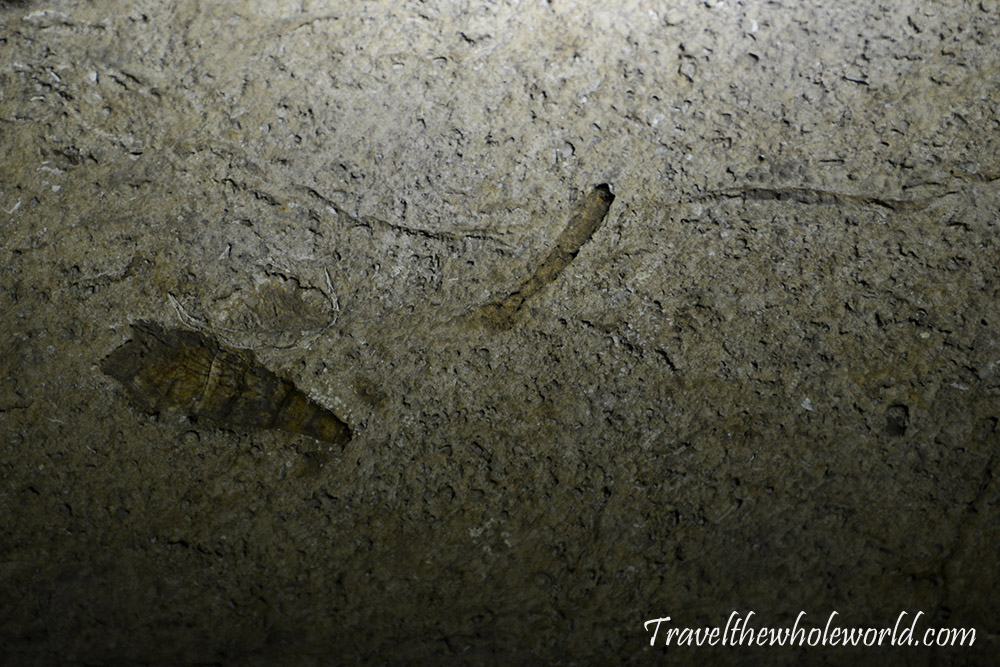 Visiting the Cathedral Caverns is only possible on a guided tour. I was lucky and almost had a personal tour as only two others showed up. We were able to get a lot more information and travel at a more leisurely pace. The guide talked about the ancient sea shells left behind from when this region of Alabama was once under ocean water. More impressive than the sea shells were these ancient sea sponges photographed below. These sea sponges marked the water line of an ancient ocean and looked to cover 100 feet (30 meters) in length. 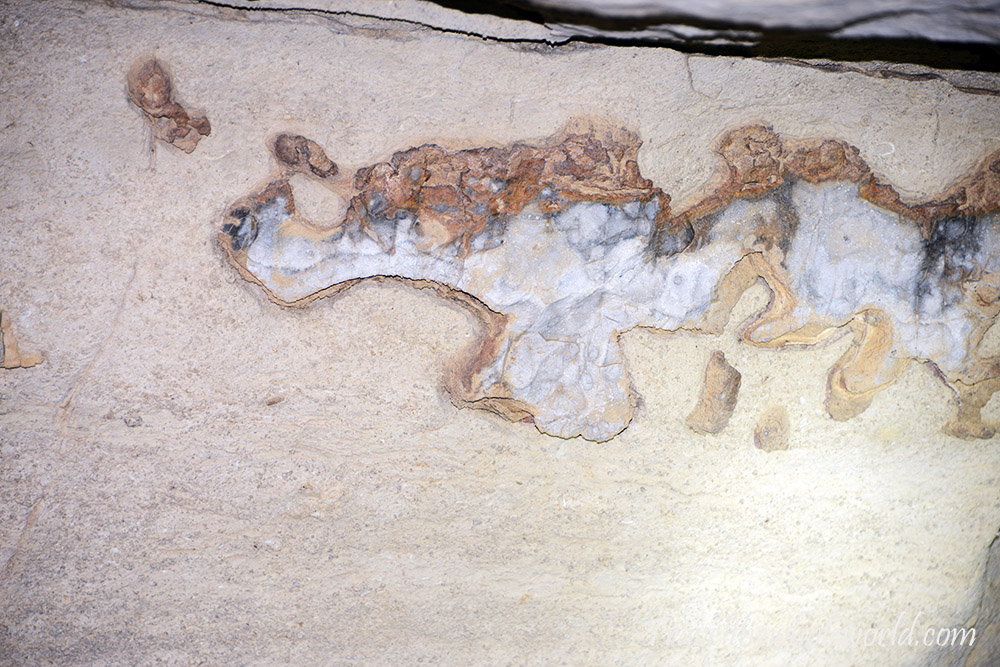 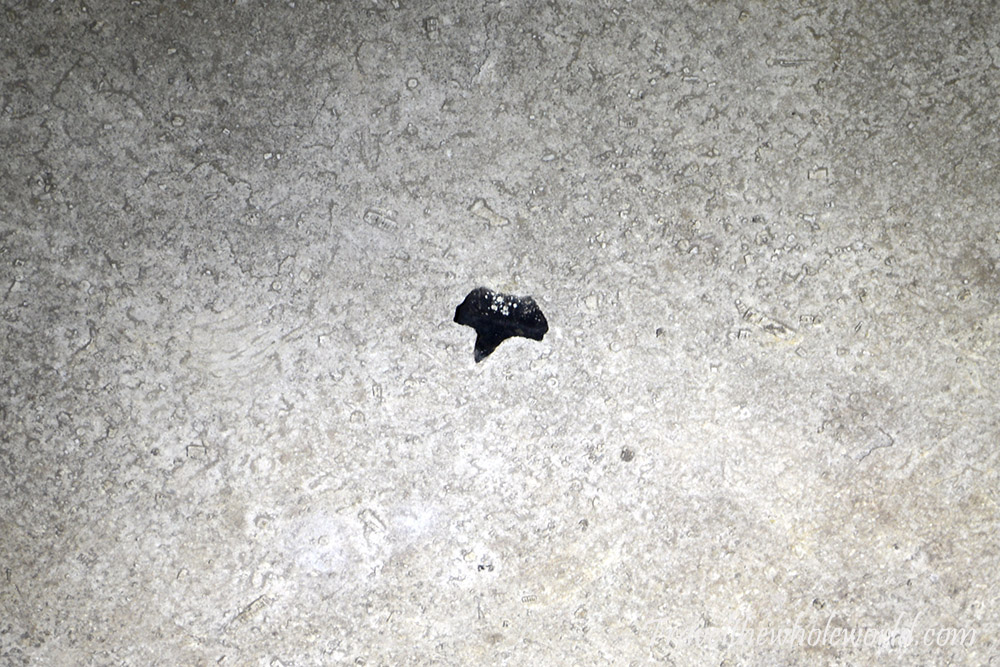 So the sea shells are to be expected in most caves, but this thing stuck in the cave ceiling I would have never believed if it didn’t come from the guide. This is an ancient shark tooth, likely belonging to a megalodon! I suppose it makes sense, because its not so difficult to find a shark tooth along a beach so one getting stuck in the cave isn’t impossible. The thing is though this shark tooth is one of nine known ones to be in the cave. 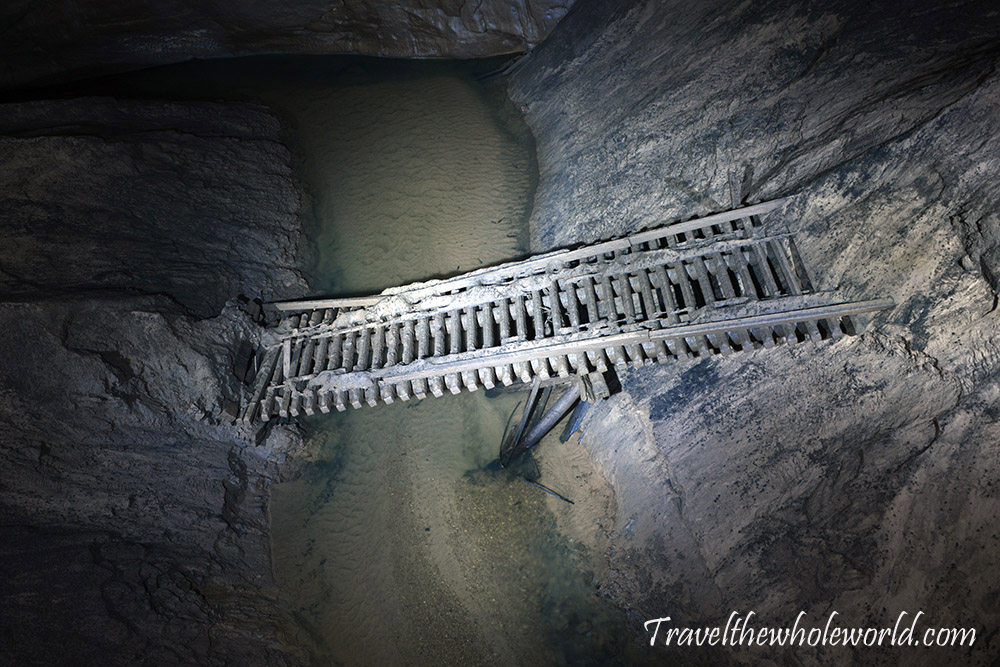 Although there are new modern bridges and lighted walkways in the cave system, the half century old bridges and boardwalks still remain. I felt that this old bridge looked like some scene from an Indian Jones movie. The original owner of the cave was named Jacob Gurley, who is responsible for building the original infrastructure. Even after he sold the cave, he remained involved with it for the rest of his life. 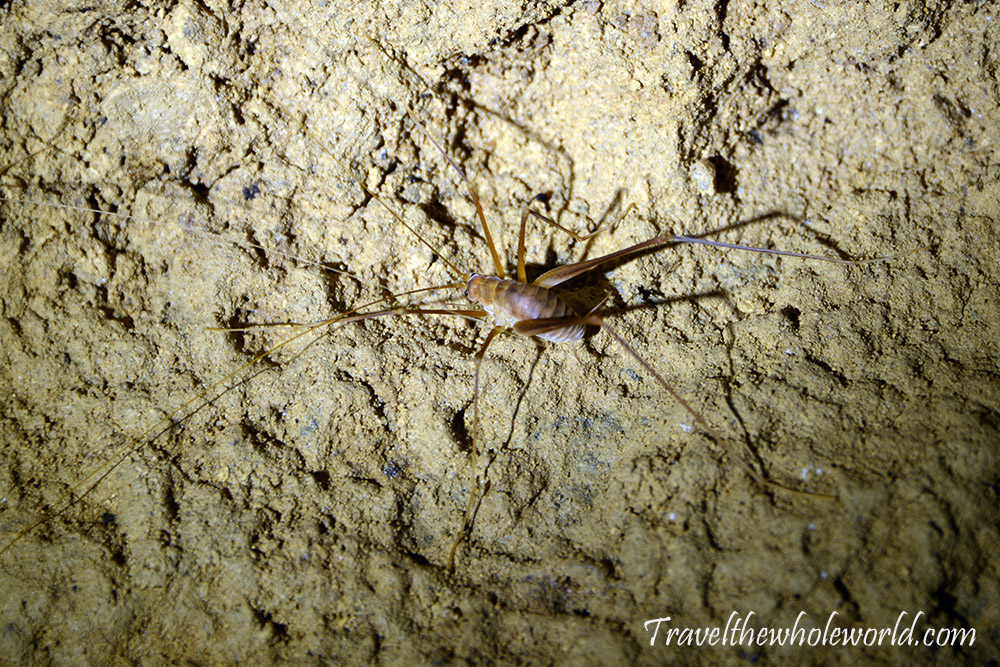 Remnants of old bridges and ancient sea creatures are always exciting, but sometimes live animals are the best, even if it’s a gross cave cricket! I used to not be bothered by these things, but as I got older I found them more and more disgusting. These cave crickets I saw in Alabama were twice as size as ones I’ve seen before for whatever reason. Luckily none of them attempted to jump on me! 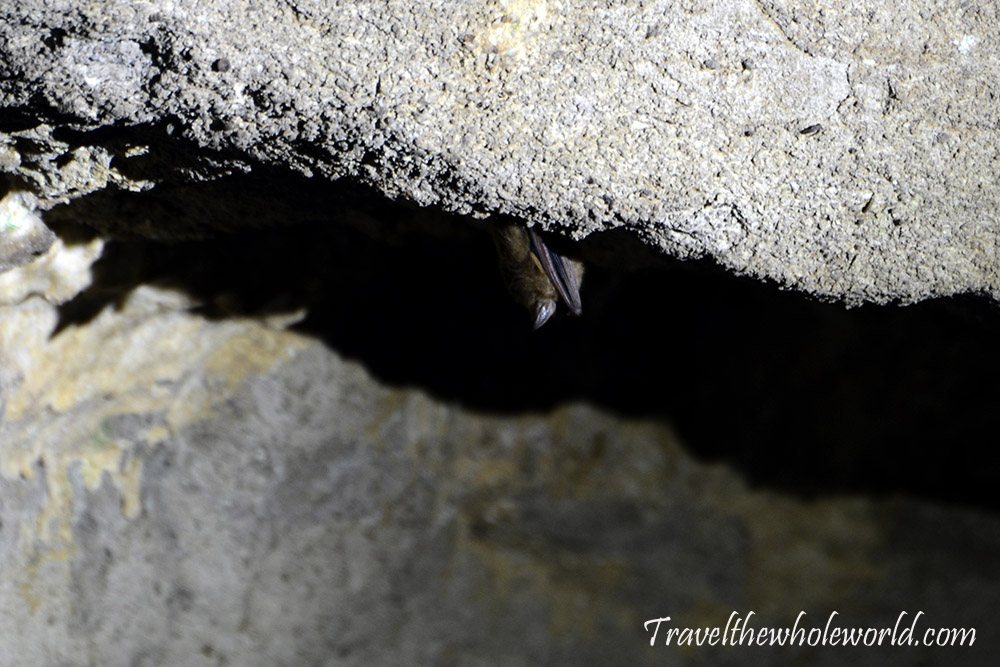 The good thing about Cathedral Caverns was that there were tons of bats in the cave. Instead of being in large groups, these bats seemed to prefer to live alone. The bats above and below were two different ones of the dozen that I saw. These were really tiny, maybe the size of a mouse! This one below didn’t seem to care that we were only 10 feet (3 meters) away from it. 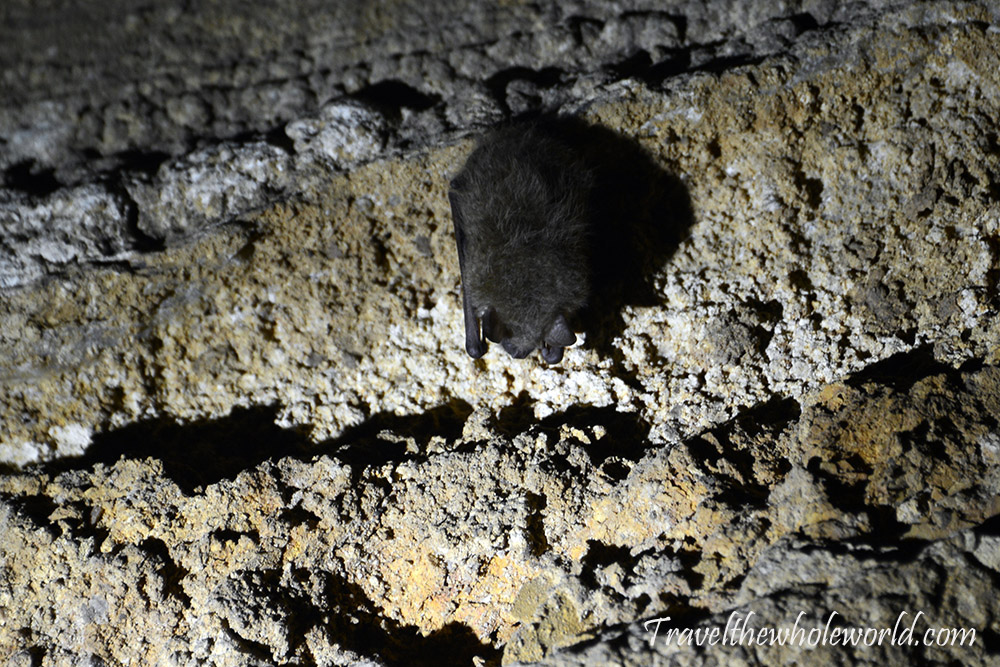 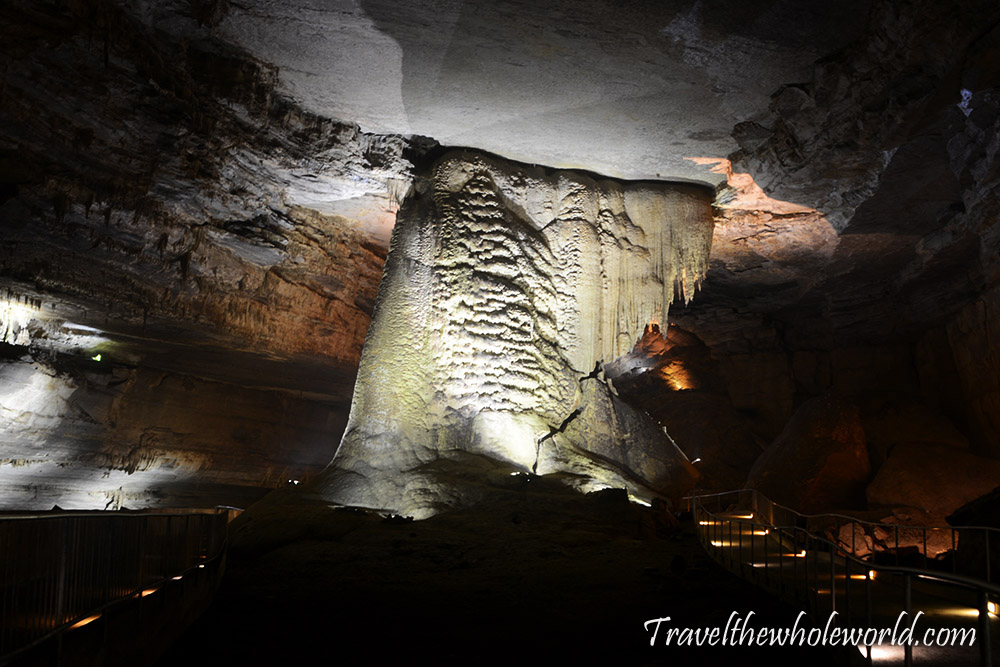 The rest of my photos from Cathedral Caverns show all the natural underground formations. Many of these are named, and this massive column above is called the Goliath column. Cave columns form when stalactites from the ceiling eventually connect to stalagmites. This one likely started off as a skinny column but over hundreds of thousands of years became the massive formation it is today. 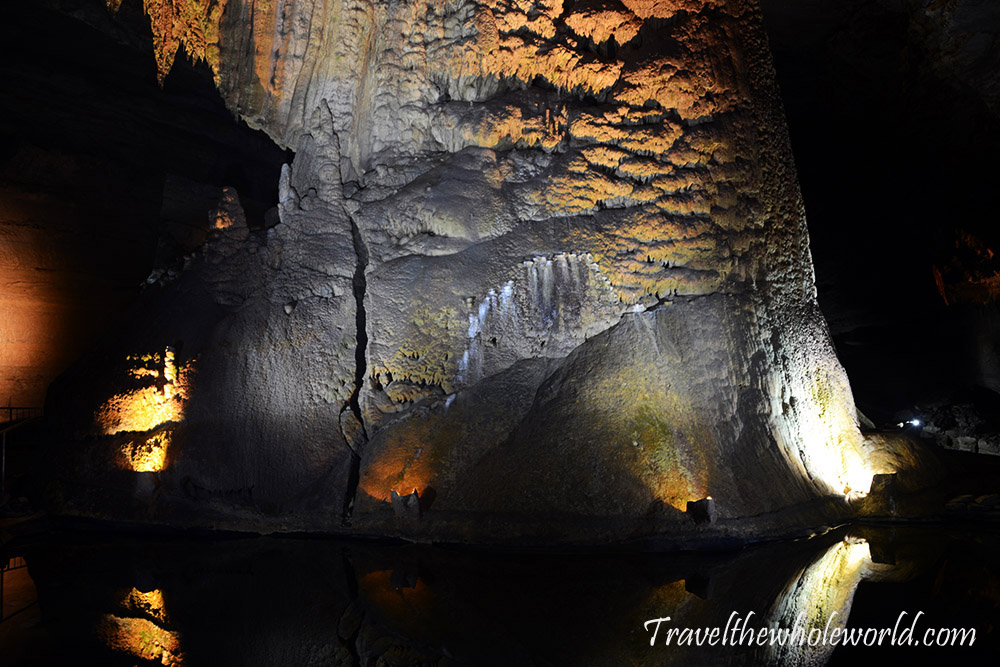 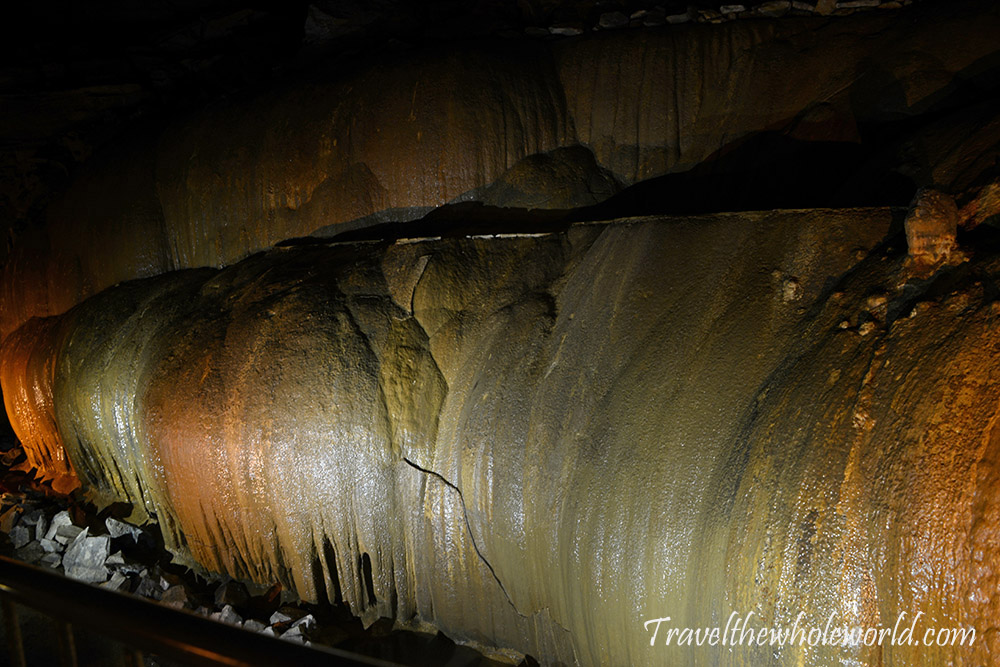 Other formations look totally different, like this super smooth and colorful one created by water flow over time. It looks to be like these broken columns below were once suspended in the air but the ground caught up over time. I was told that there once was a minor earthquake here, that is what caused these to break. There is also a giant crack in the Goliath column from the same earthquake. 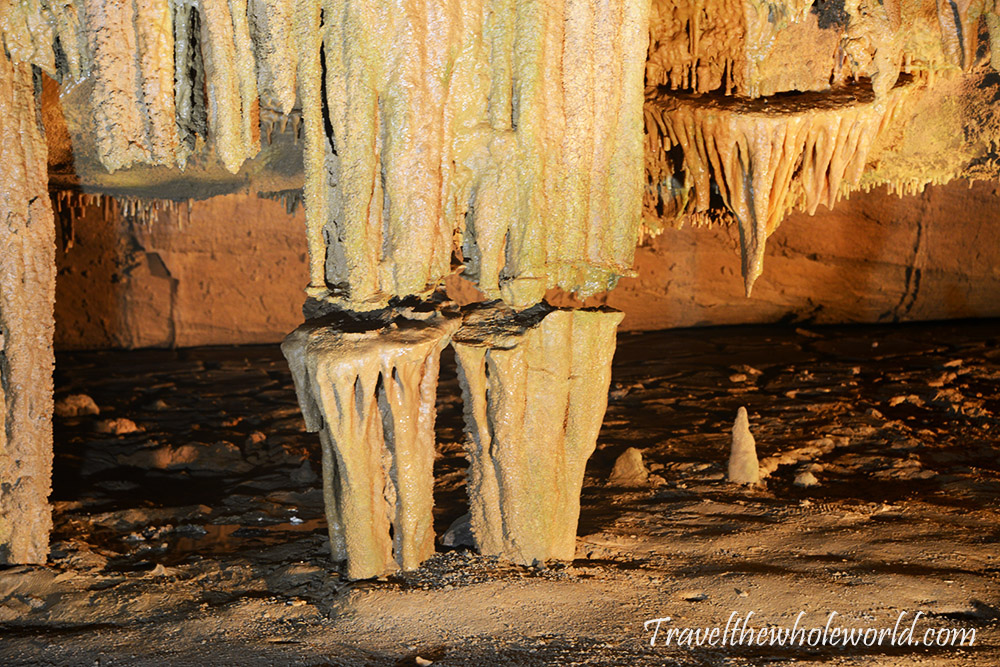 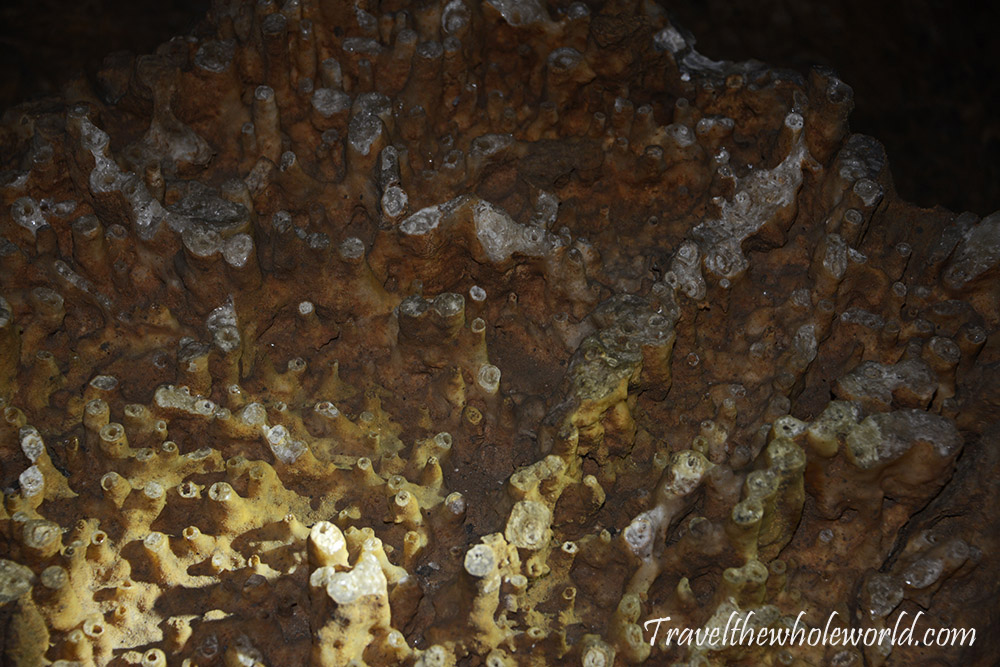 I’ve been to several caves before, so it was pretty much already drilled into my head how most of the formations are created. One of them that I never learned about until this trip was straw formations. These are the same as stalactites, but end up leaving a hollow center creating multiple straws that hang from the ceiling. One of these had fallen to the floor and shattered, so in this photograph you get to see what they look after being cut in half. 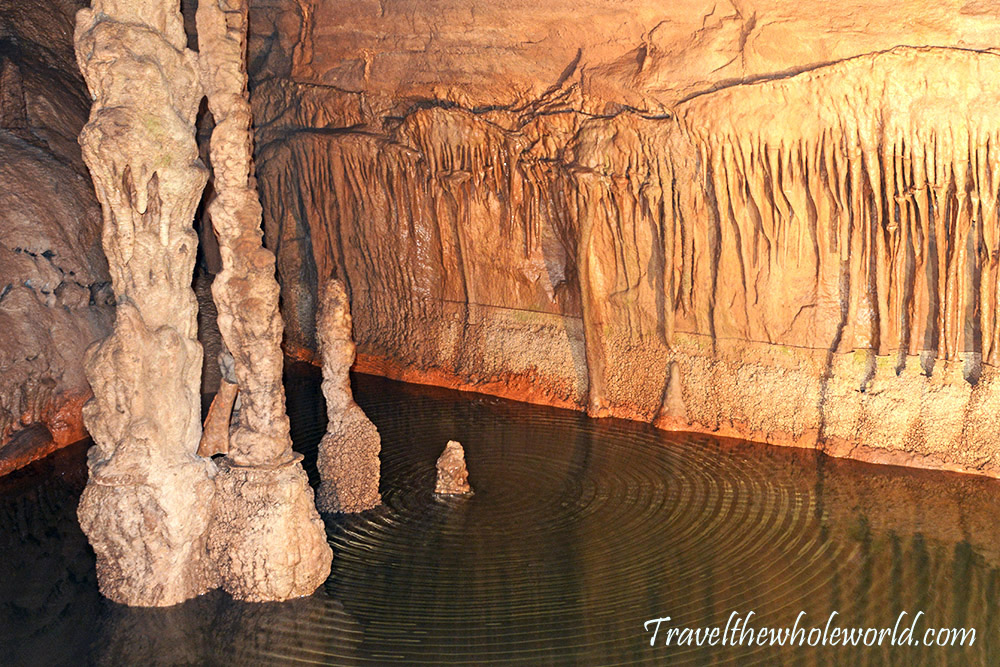 Not much going on in this photo, just a small little pool of water that got my attention from its ripples. The ripples were non stop even though I couldn’t feel any kind of vibrations the entire time I was in the cave. 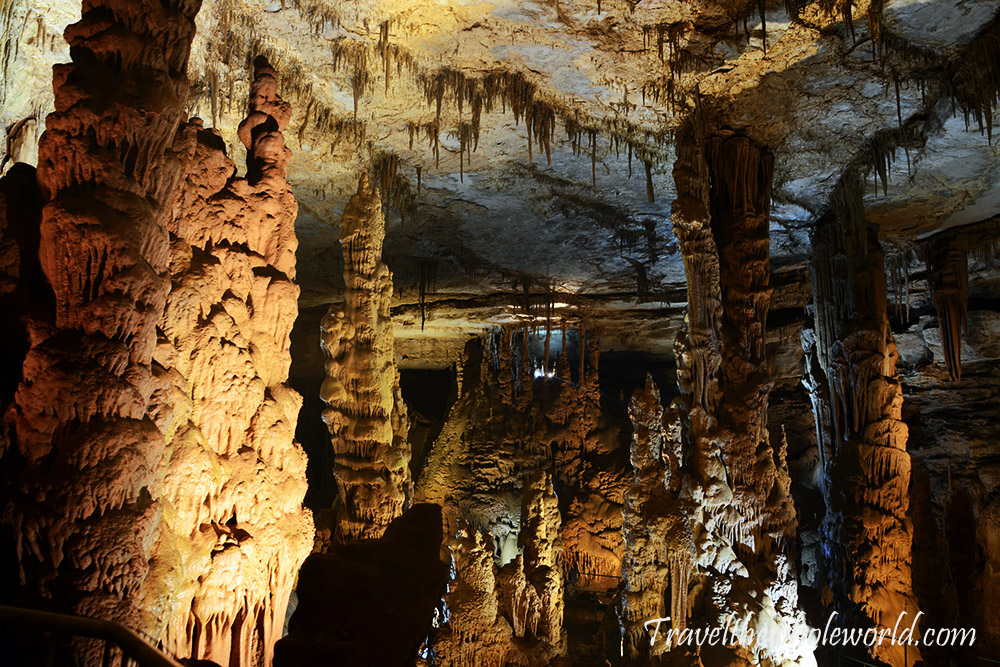 I’ll have to admit, that if it wasn’t for the bats and sea creatures left behind in the beginning of the cave this place wouldn’t have been so interesting. That’s assuming that things stayed the same, because the entrance of the cave was no more than massive blocks or rocks for at least the first third of a mile. Deeper inside you start to get a few beautiful formations, until finally arrive to this area known as the stalactite forest. 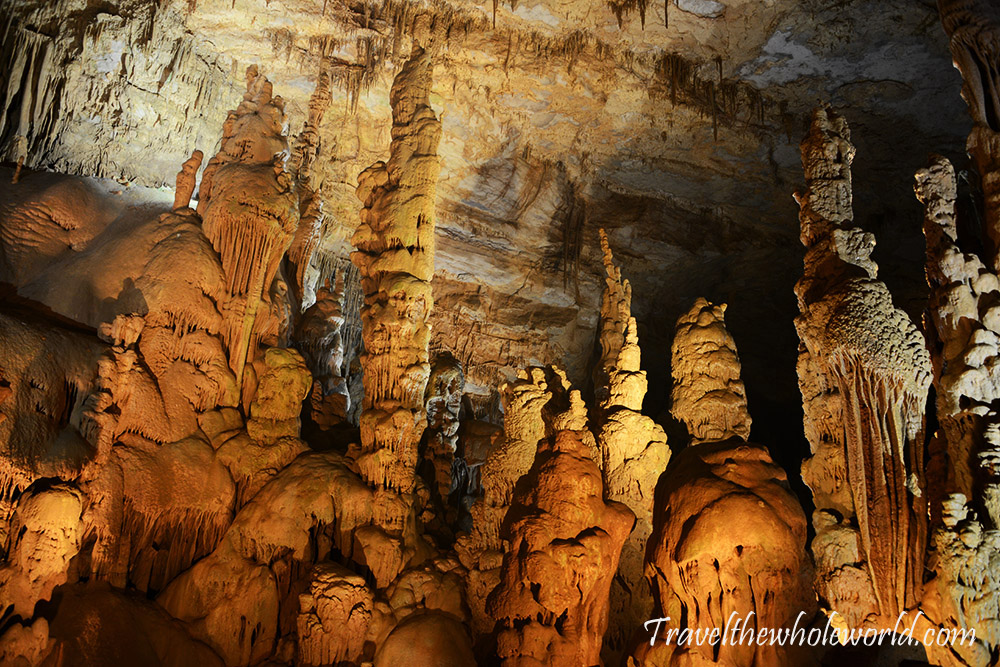 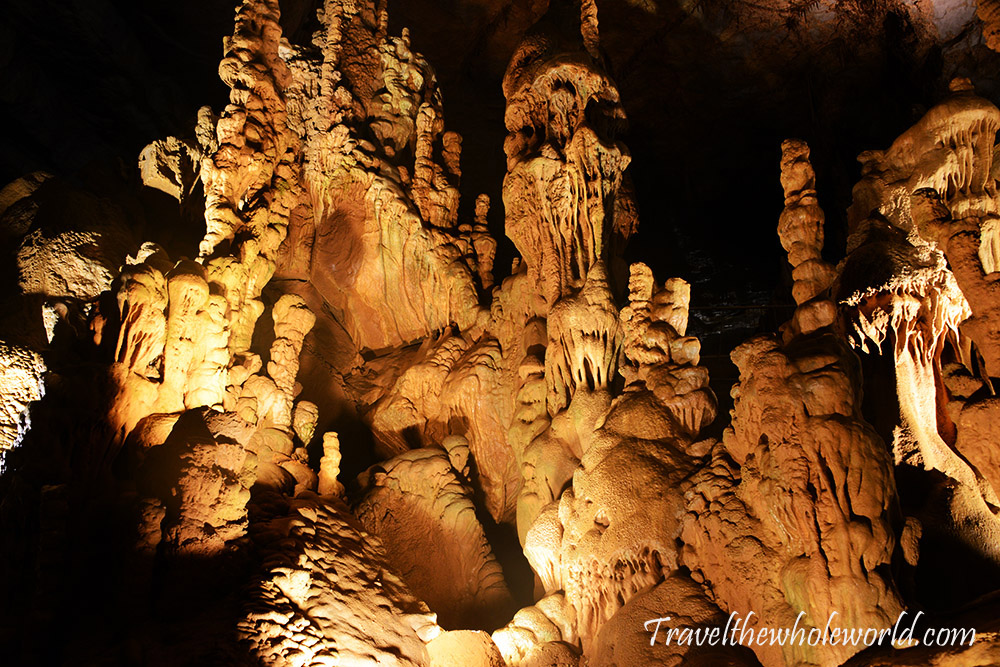 The stalactite forest is an area where hundreds if not thousands of stalactites and stalagmites have grown together. They came in all shapes and sizes. 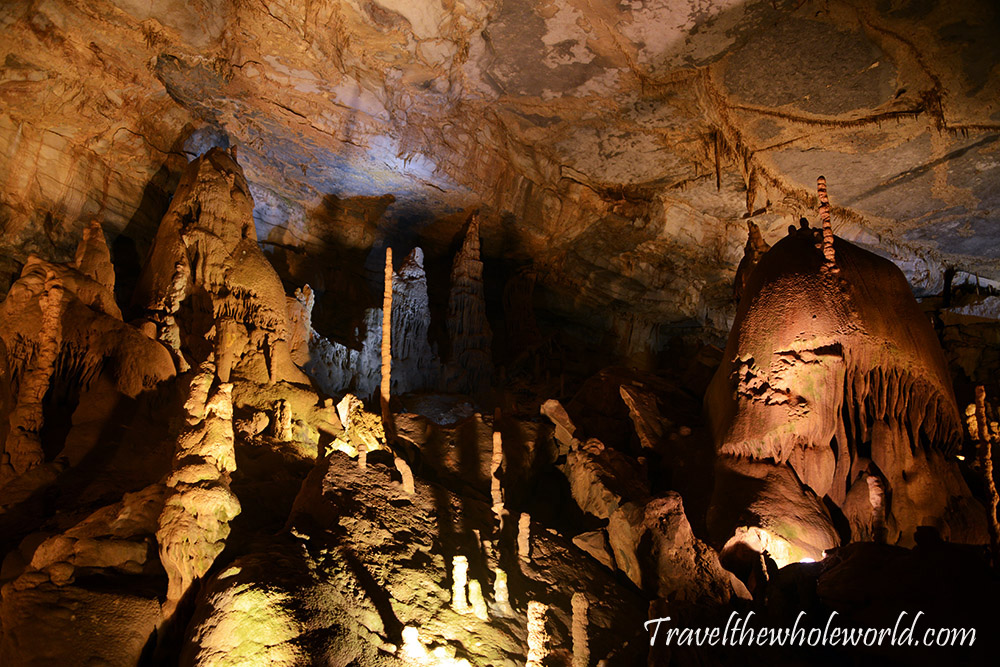 The skinny stalagmite in the distance in looked to be about 30 feet (10 meters) tall. With its tiny width its amazing its still standing. If my height estimate is right, this stalagmite is roughly 35,000 years old, as they grow about an inch every hundred years. 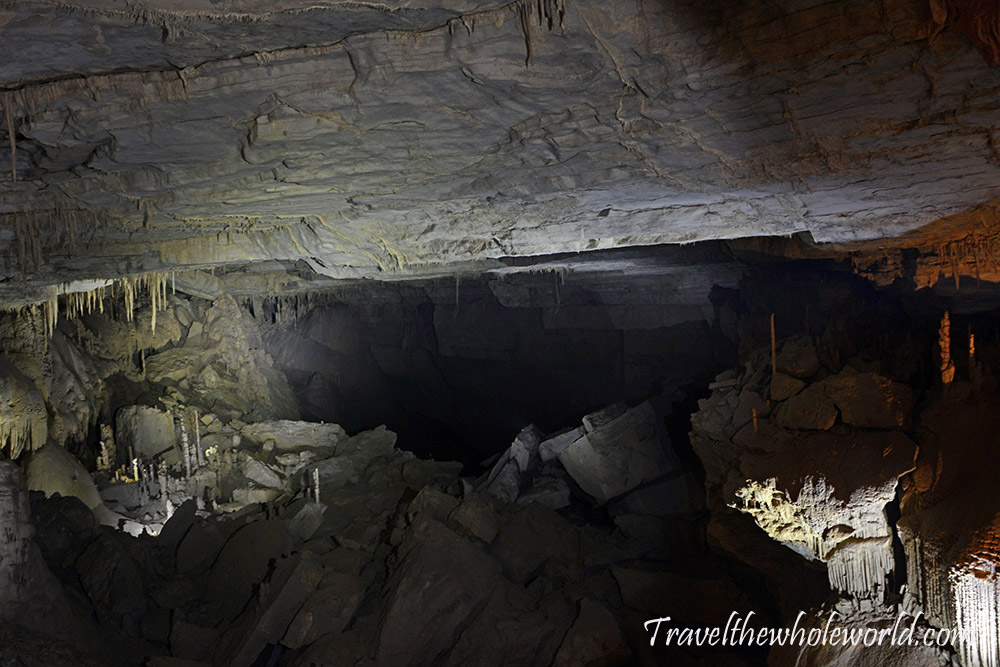 The lit pathway takes you just over a mile (1.6 kilometers) until you reach the end of the tour. The photograph above shows that the cave clearly keeps going, and this actually marks only the halfway point in terms of the cave depth. Apparently somewhere down there is another stalactite forest, even larger than the one we visited. 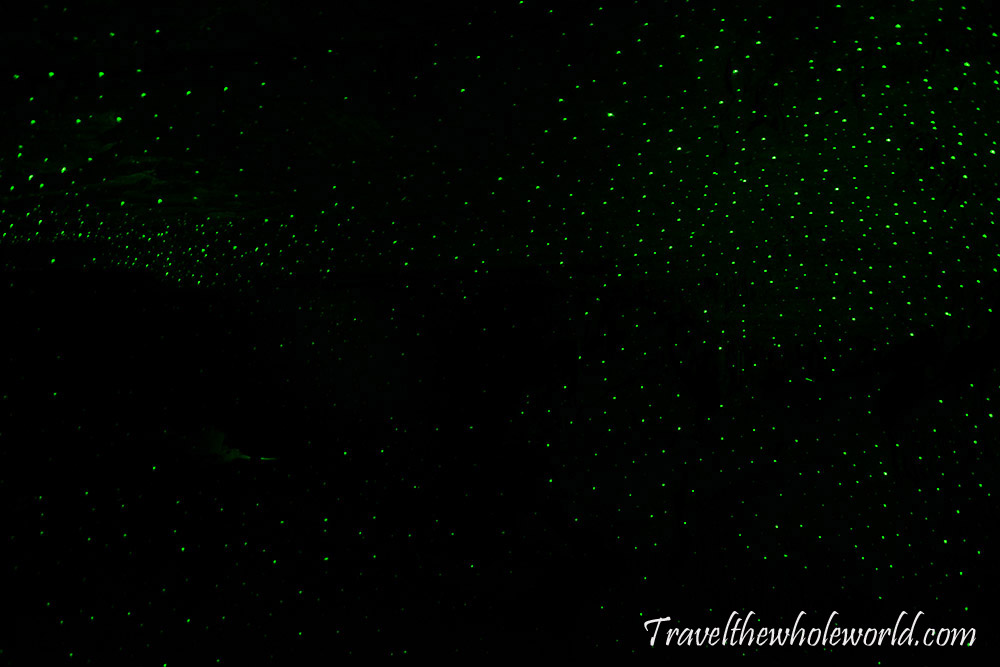 I had put my camera back into my backpack when the guide turned off the lights to show us true darkness. I’ve had this experience a few times, where closing and opening your eyes makes absolutely no difference. After that another switch was thrown up which threw out small lasers that appeared on random objects. I had to quickly take out my camera so am disappointed with the photo, it was much more impressive in person! 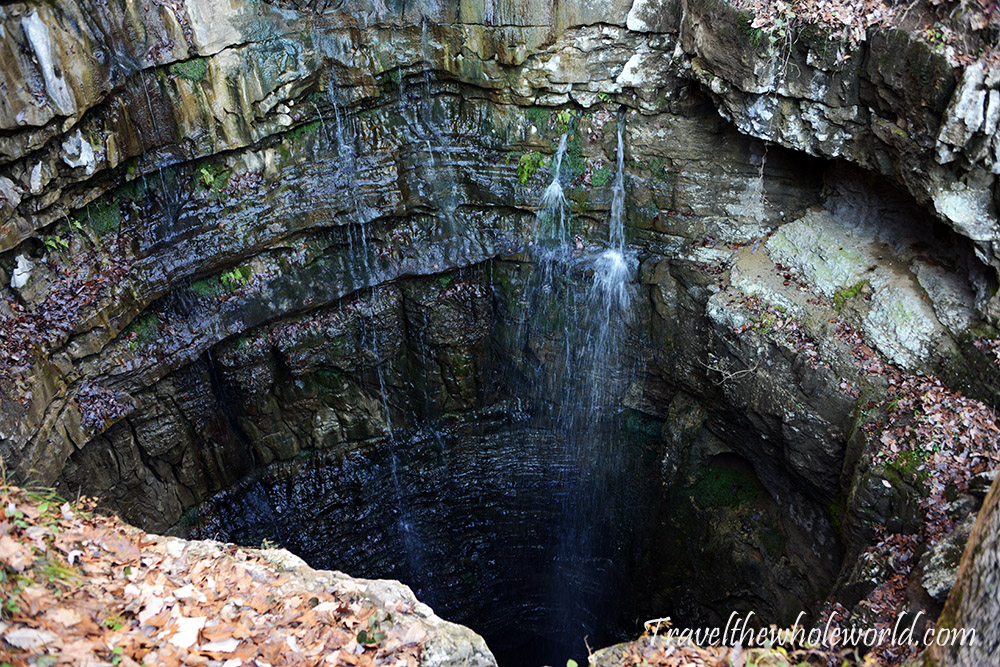 Cathedral Caverns is one of the most popular and accessible caves in northern Alabama, but its just one of literally thousands in the area. The main cave I had wanted to visit was Stephens Gap, after I saw some incredible photos years before. These caves are managed by the south eastern cave conservatory, and visiting requires a permit. In addition to the permit, you’re free to rappel and go spelunking provided you have at least three people. I came alone, so as tempting as it was I didn’t try to jump off the edge here and drop down into this incredible abyss. 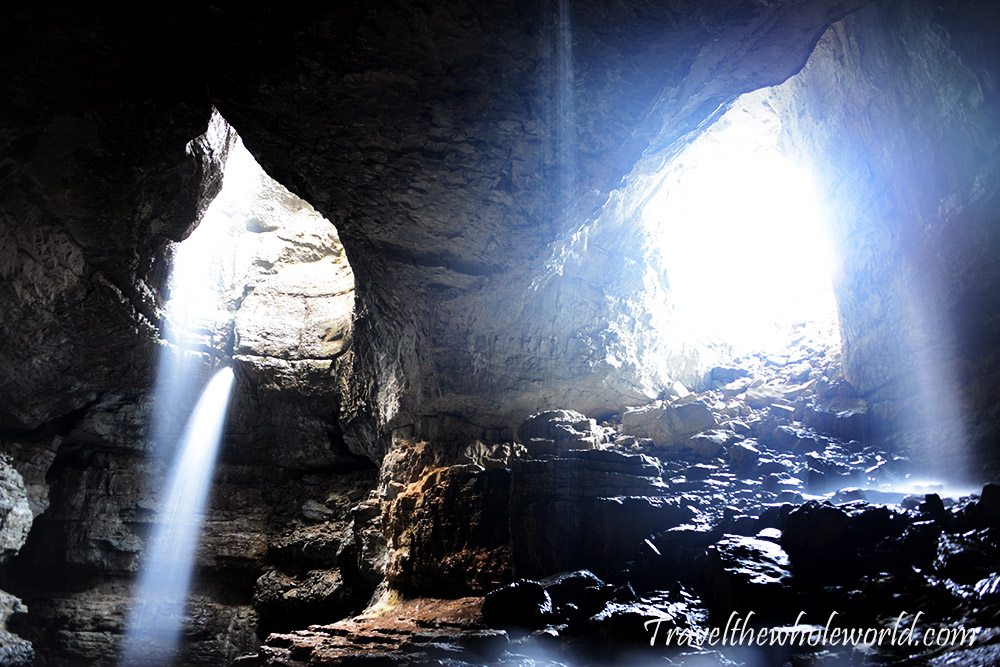 Luckily there are two different entrances into Stephens Gap. The second entrance is a slippery scramble that any cautious person can use. Getting to the cave system required a nearly one mile hike that was easy except for the annoying mud. The mud was from all the recent rain storms, and rewarded me with this beautiful underground waterfall! 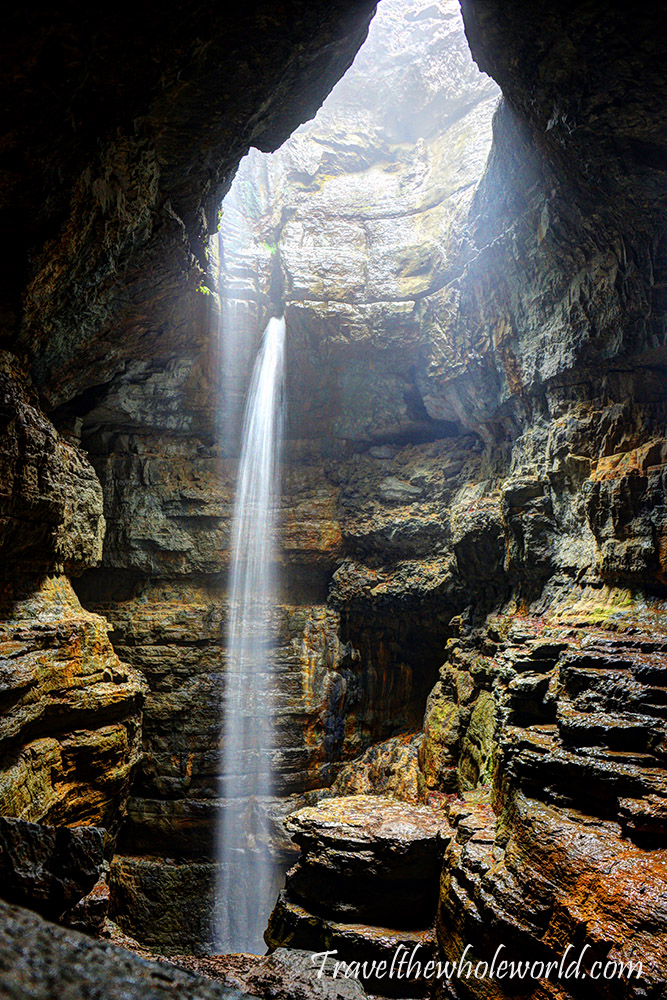