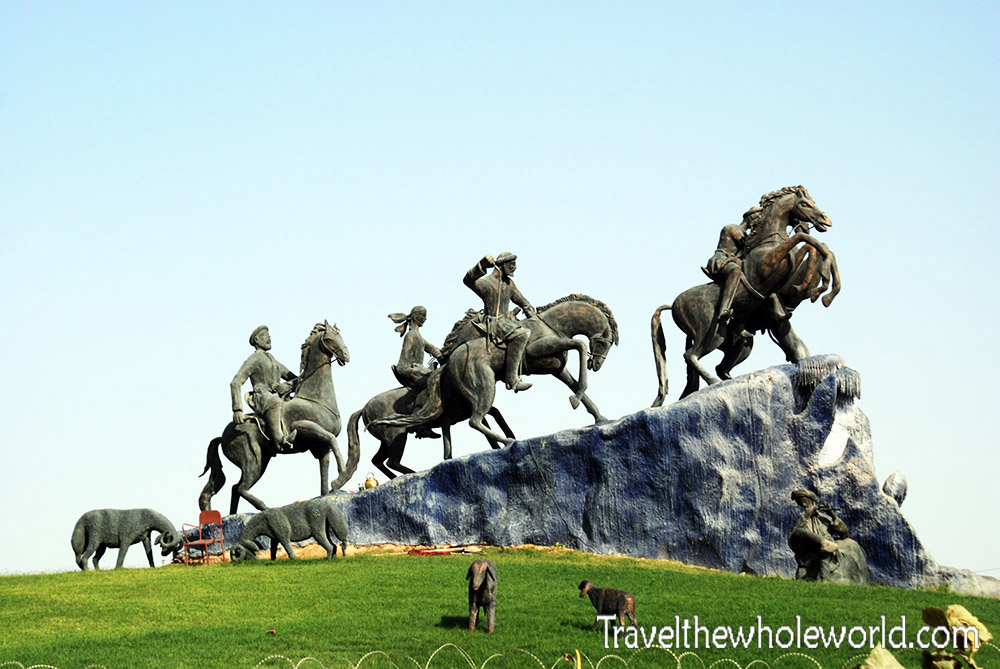 After eight hours of driving north from Kabul, I reached the city of Mazar e Sharif, often just called Mazar for short. The entrance to the city is marked with these large statues of people on horseback. A local told me they were just for decoration, but I felt there must be a story to them. I later found out it’s a Buzkashi Monument; a very popular sport in the north. Buzkashi is actually the national sport of Afghanistan and is where riders on horseback attempt to capture a dead goat and bring it to a goal. I didn’t get to watch Buzkashi while I was in the country, but the monument here was the first thing I saw as I entered Mazar Sahrif. After my visit I heard they painted the monuments to try to add color. I think it looked much better the way it was when I visited than it does now! 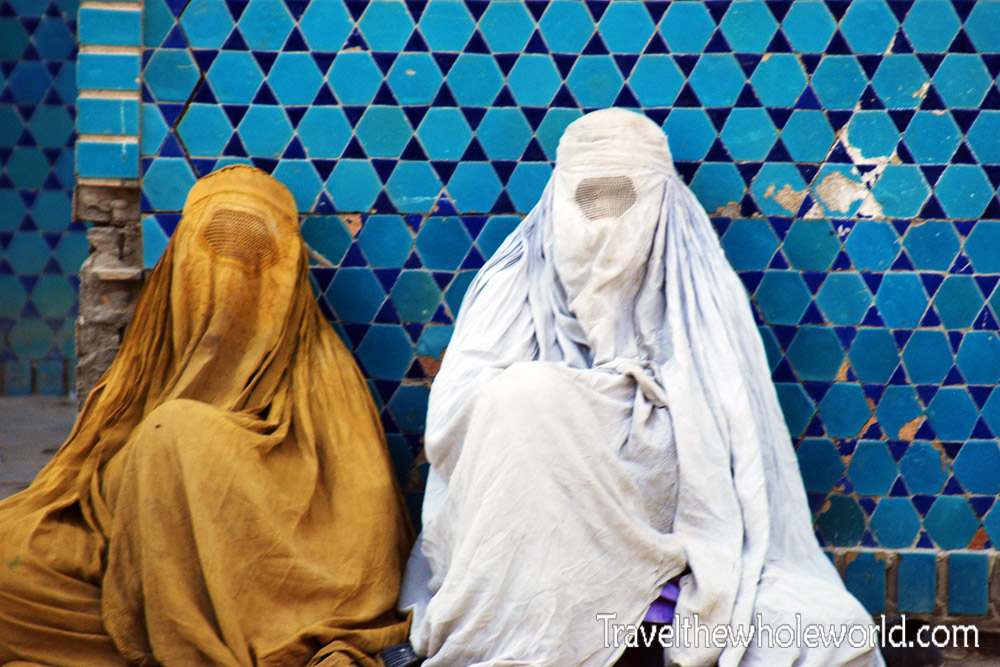 As a city, Mazar Sharif itself didn’t seem to look too different from other places in Afghanistan. I did notice a different fashion of burqas here. Like Herat, blue were still the most popular, but I saw one gold and many white burqas that I hadn’t seen anywhere else in Afghanistan. 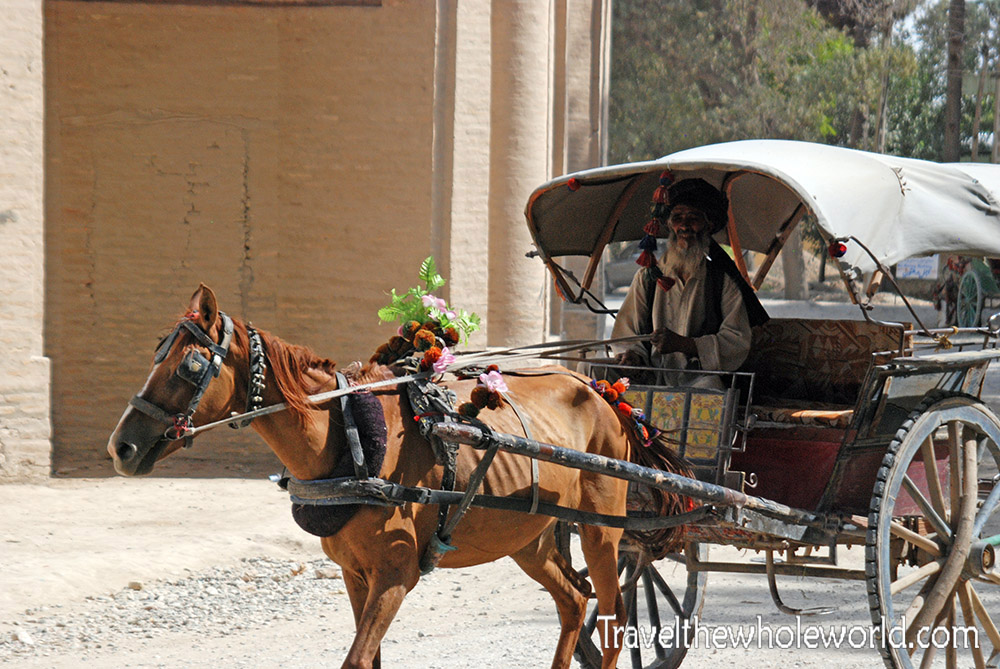 Once inside Mazar e Sharif, I found it to have more of a village vibe than a major city. I think Mazar Sharif is probably the most laid back city in Afghanistan. The atmosphere felt much less intense than other parts of the country and crime and terrorist attacks are rare as well. Above is a horse pulled chariot I saw inside Mazar e Sharif. They seemed to be a popular way to travel here in the city. 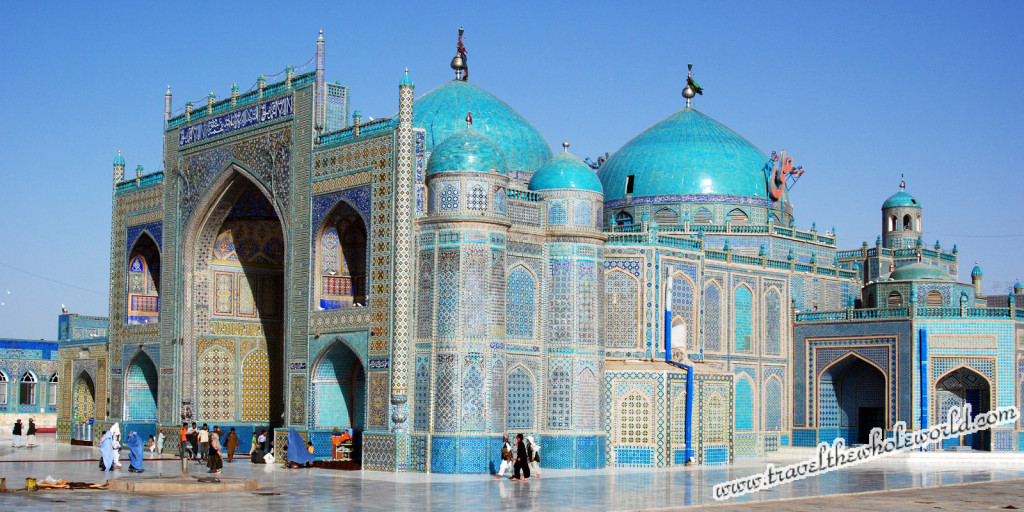 No question about it, the highlight to a trip to Mazar is their famous Blue Mosque. The Blue Mosque is also known as the Shrine of Hazrat Ali. The son in law of the Prophet Mohammed, Ali ibn Abi Talib is considered to be Mohammed’s successor by Shi’ites after his death. This belief is actually what ended up splitting the Muslim believers into two main sects of Sunnis and Shi’ites. Sunnis believe Ali was the fourth and final Rashidun; a strong religious leader rather than an actual prophet. Most agree that Ali is buried in Najaf Iraq, but some claim he was transported to Afghanistan and is now buried here in the Blue Mosque. As an infidel, I was not allowed to enter and investigate. 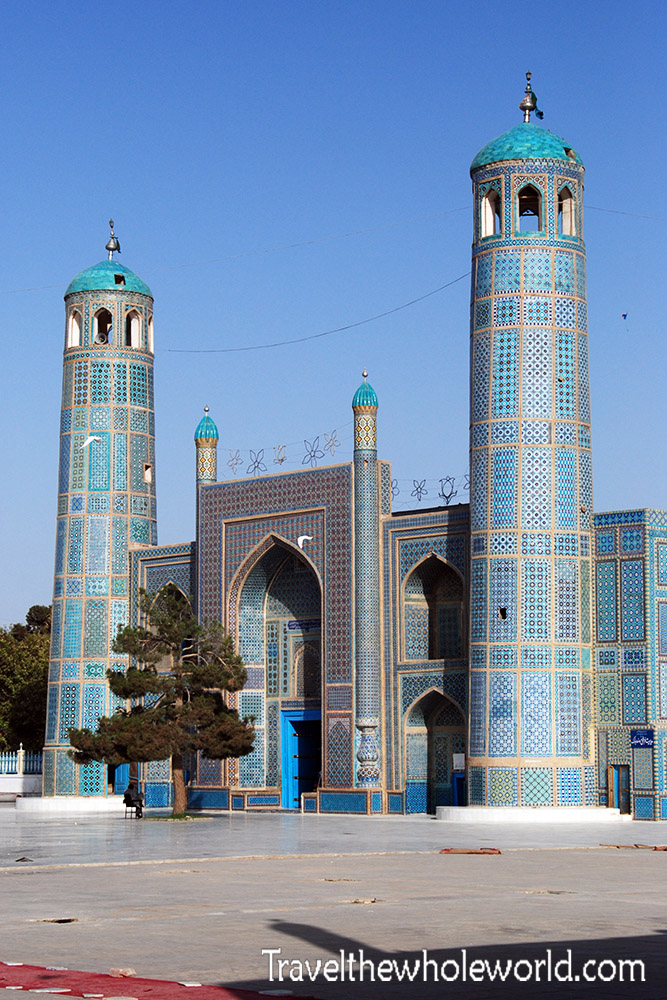 Like the Friday Mosque in Herat, the Blue Mosque in Mazar is decorated by thousands of tiles. Originally a shrine was built in this location and destroyed by Ghengis Khan in 1220 CE. In the 15th century it was rebuilt and over the years decorated until it looks as it does today. Above is the entrance to the Blue Mosque complex. Below you can see some of the details of the mosque. 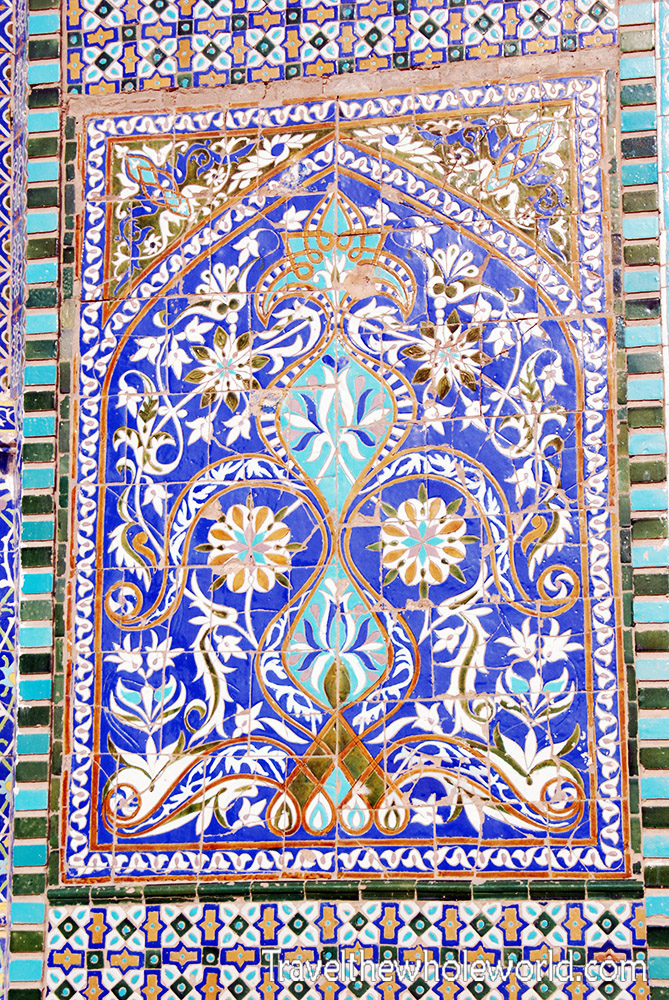 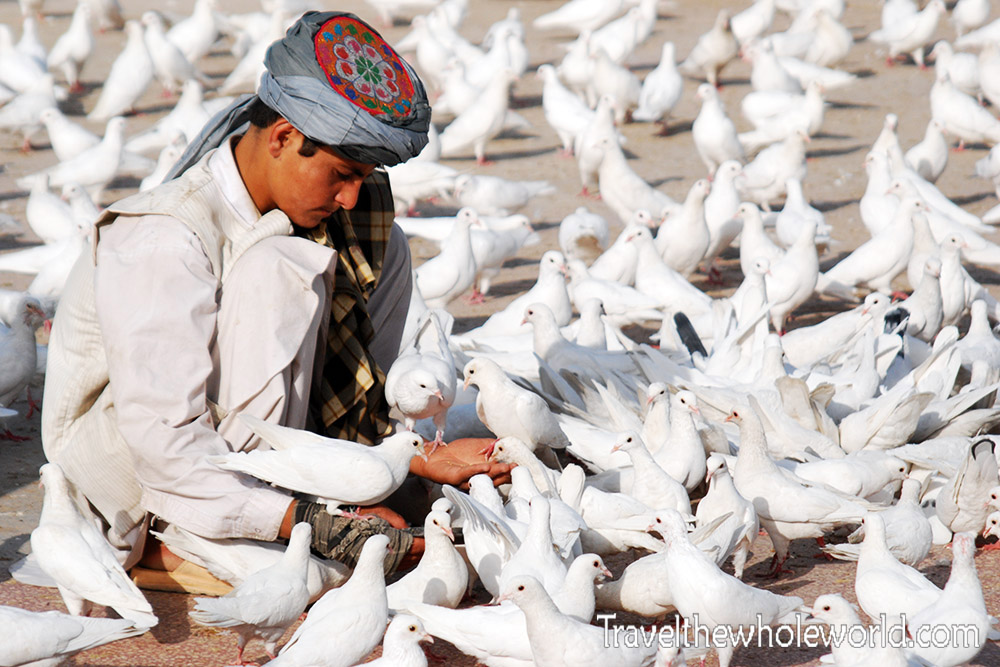 Something unique at the Blue Mosque is that there are thousands of doves. Unlike other parts in Afghanistan, every single one of them here is white. There is a local saying that if you bring a colored dove to the mosque, it will change to white within 40 days. I seriously tried to find a dove that wasn’t white and failed! 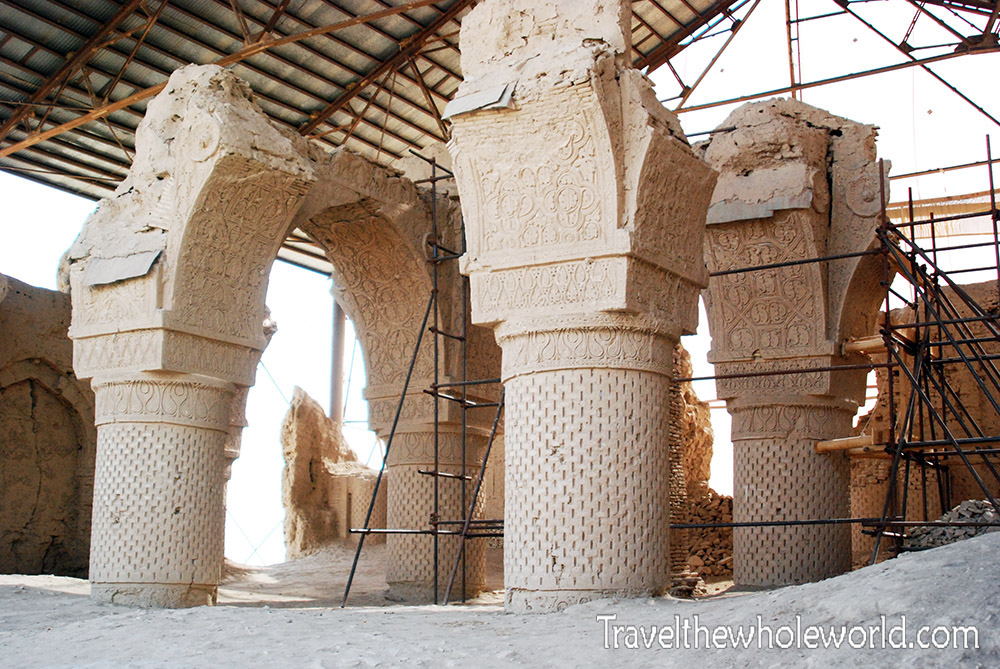 Mostly left to ruins, another important religious place near Mazar Sharif is called the nine column mosque or the No Gumbad Mosque. It is considered to be the oldest and first mosque in Afghanistan that was built by Arabs in the 9th century. Nothing much remains except for a few columns and arches, but when I visited it was under restoration. The place was a little bit remote and I thought I had the place to myself. Behind the mosque in the shade I found an old man sleeping on a cot, who asked for a donation when he woke up. Above you can see some of the original arches of the mosque, below is a shot showing some more detail. 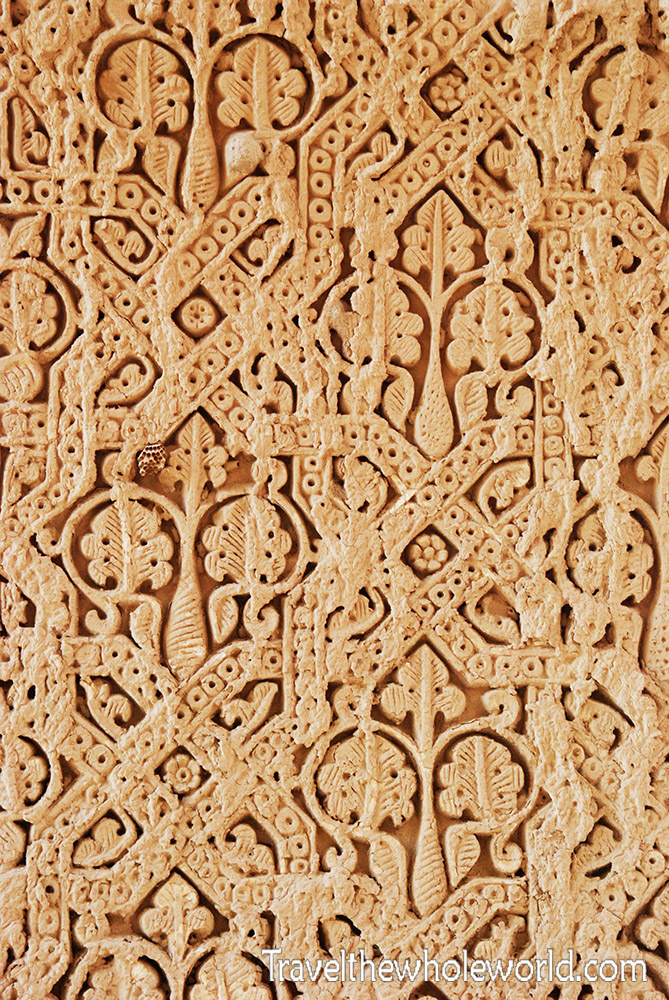 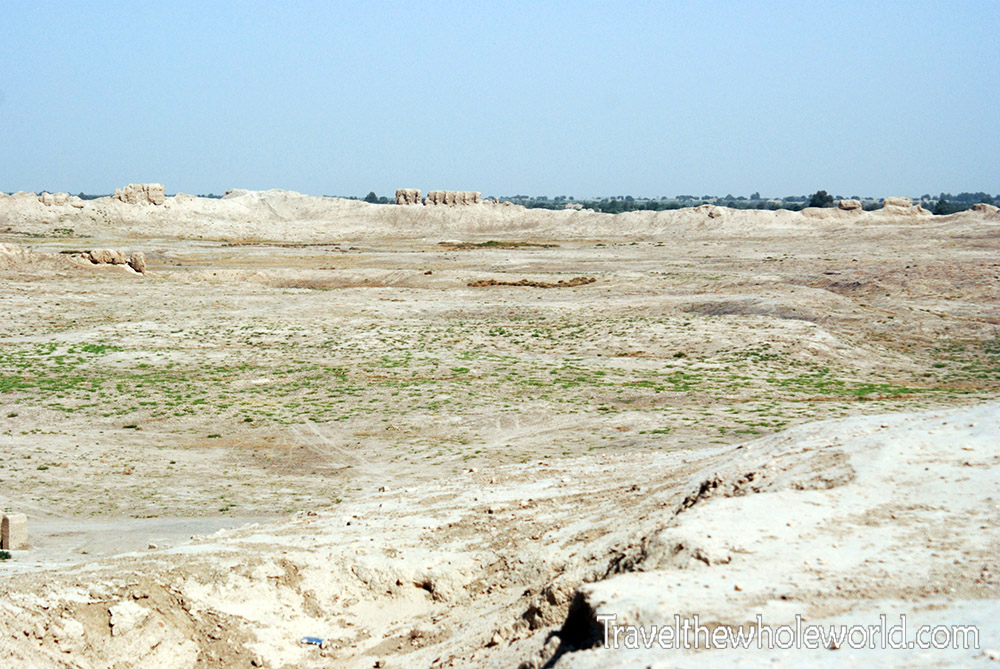 Long before the Blue Mosque and No Gumbad Mosque, the area was conquered by Alexander the Great. His empire also included Mazar Sharif over 2,000 years ago. Above is the remains of what was a small city that was fortified with walls during his time. Everything was made of mud, so it ‘melted’ over the years and doesn’t visually look impressive nowadays. 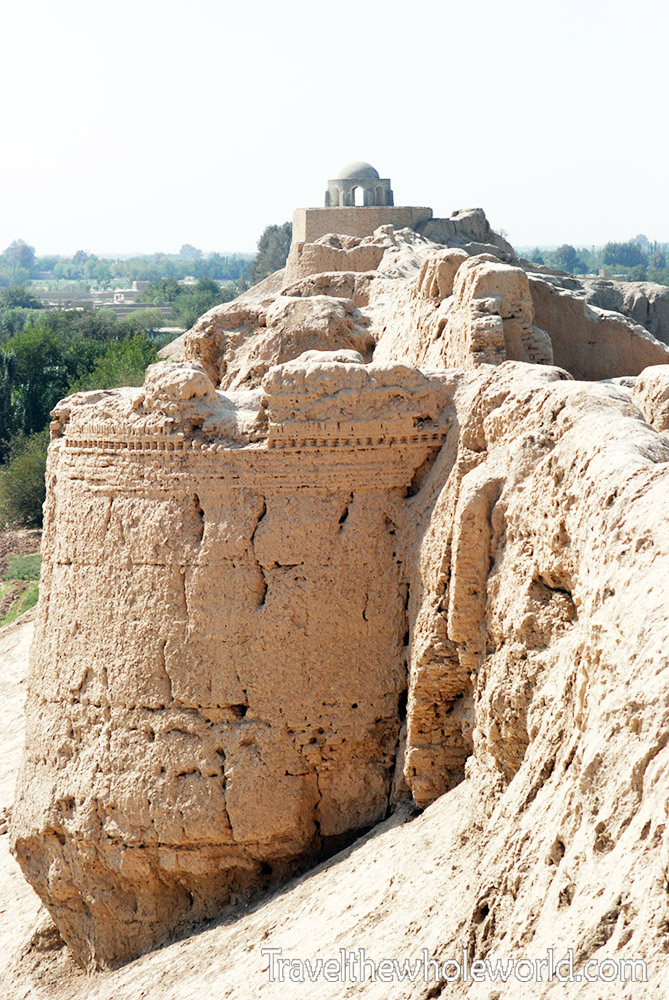 The city walls were in really bad shape, but some areas were pretty well preserved compared to the rest of the city. I did a hike on top of the wall, jumping over several large holes and even the occasional wasp nest. 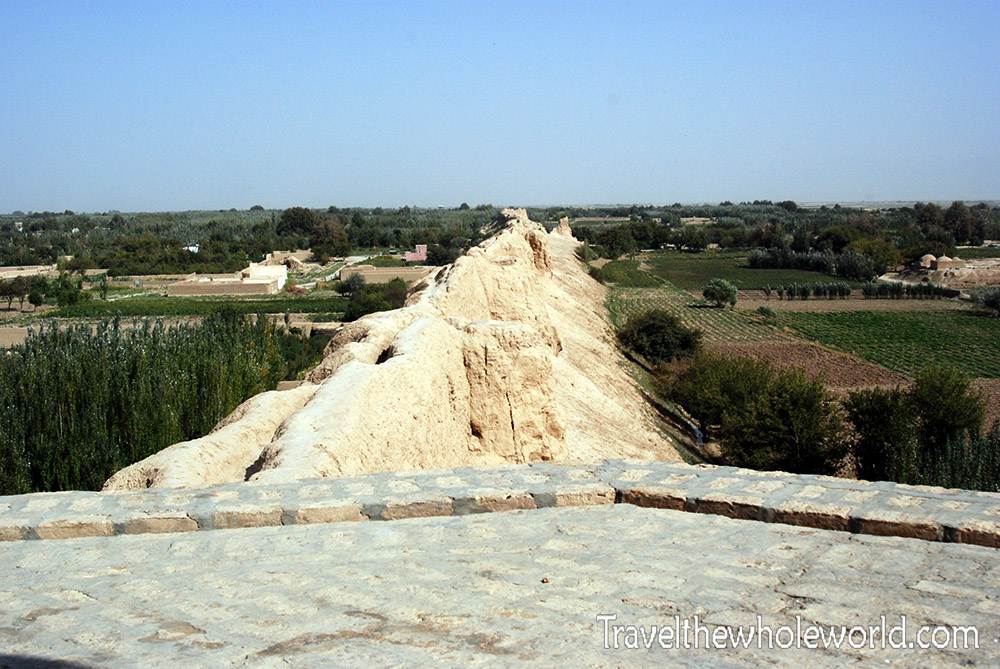 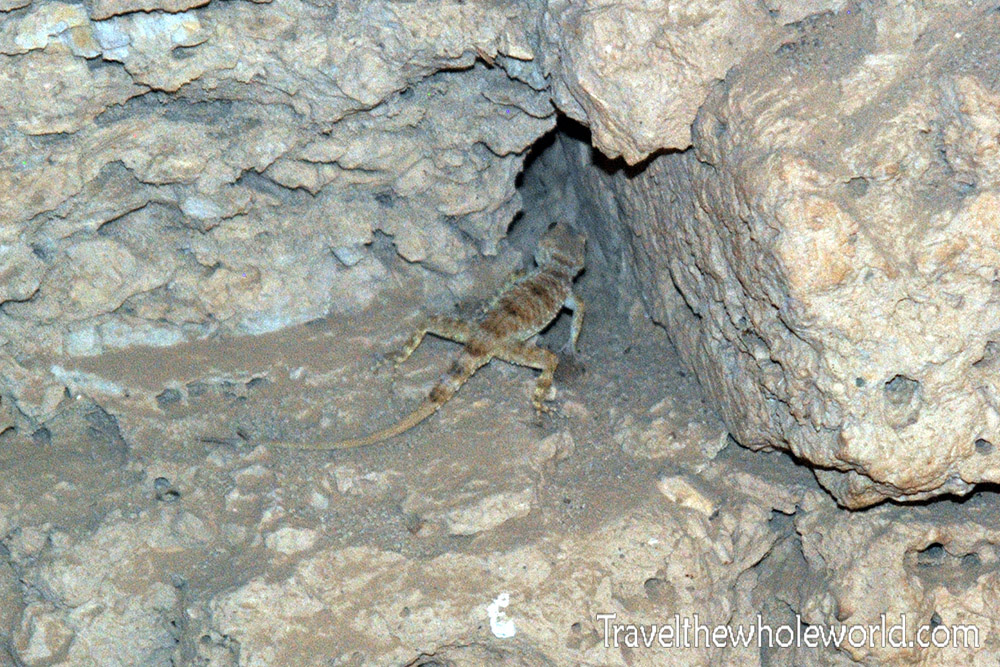 There were so many wasps nest built into the walls of the old city that I was really worried about getting stung. The pay off was that it was a good source of food for all these geckos and lizards that I saw living here. The gecko above was actually pretty large and lives within the ancient walls here. The lizard below was much smaller and I found on a nearby rock. 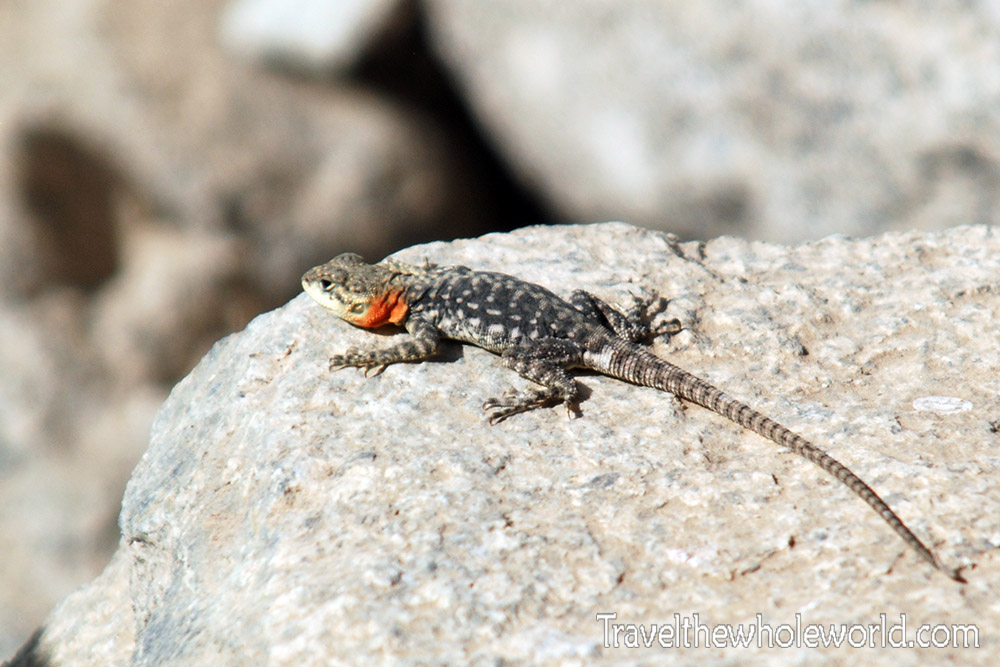 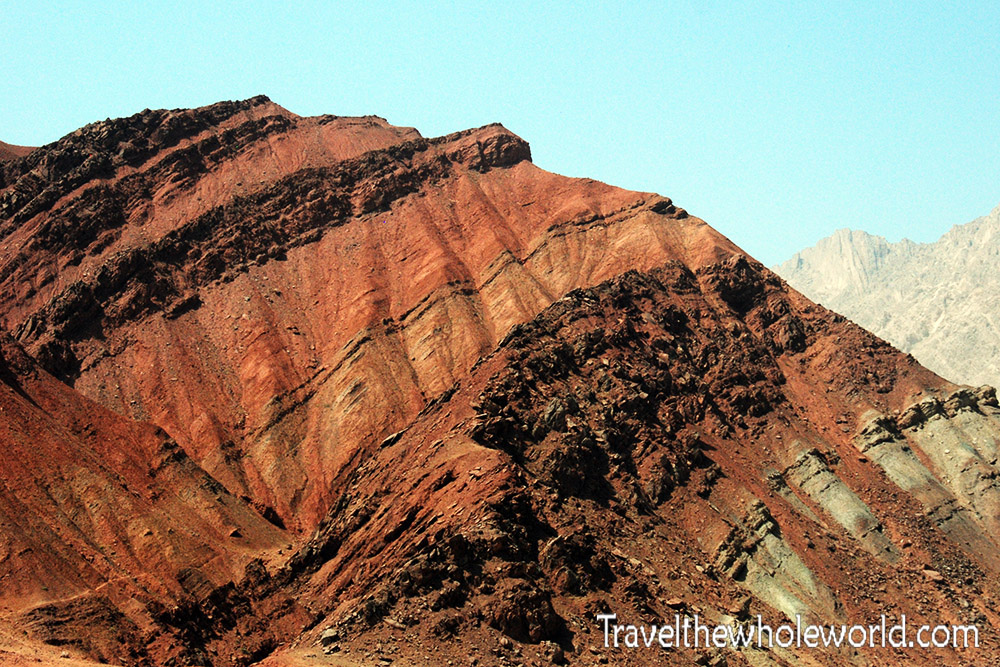 The rest of these photos show my drive between Mazar Sharif and Kabul. This drive meant passing through Afghanistan’s mountains before reaching the country’s northern borders. The Red Mountain as I called it above was one of my favorites. The mountain below was one of the most dramatic ones that we got really close to, and eventually went through it. 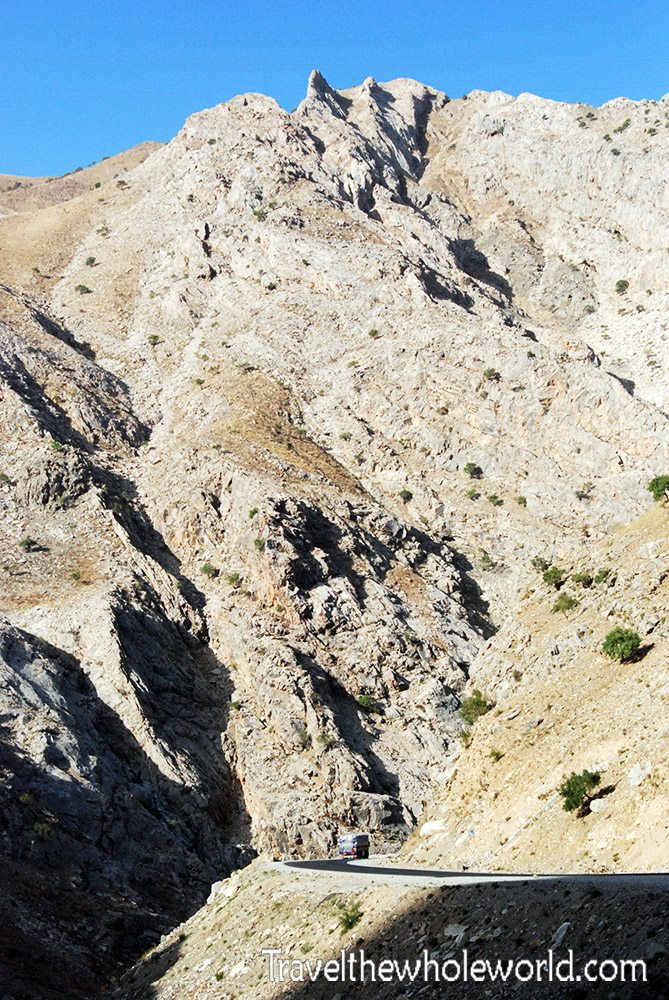 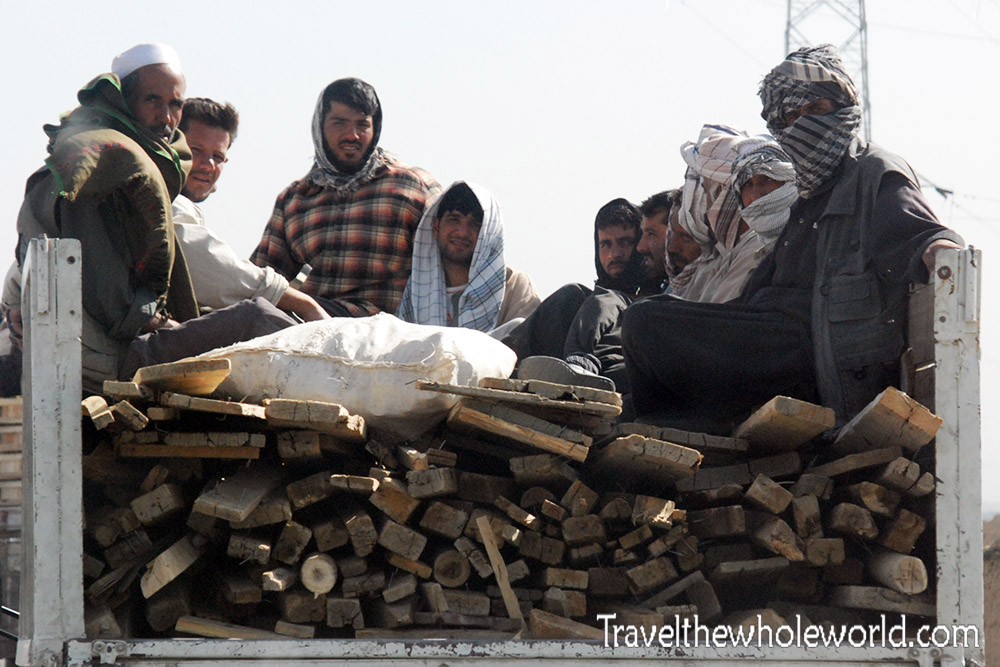 On the road trip from Kabul to Mazar I didn’t see much traffic so I suppose it wasn’t a big surprise that the city wasn’t nearly as big as Kabul. Above are some Afghans riding in the back of a truck going on their own road trip. I took their picture and waved and most of them actually waved back and smiled. 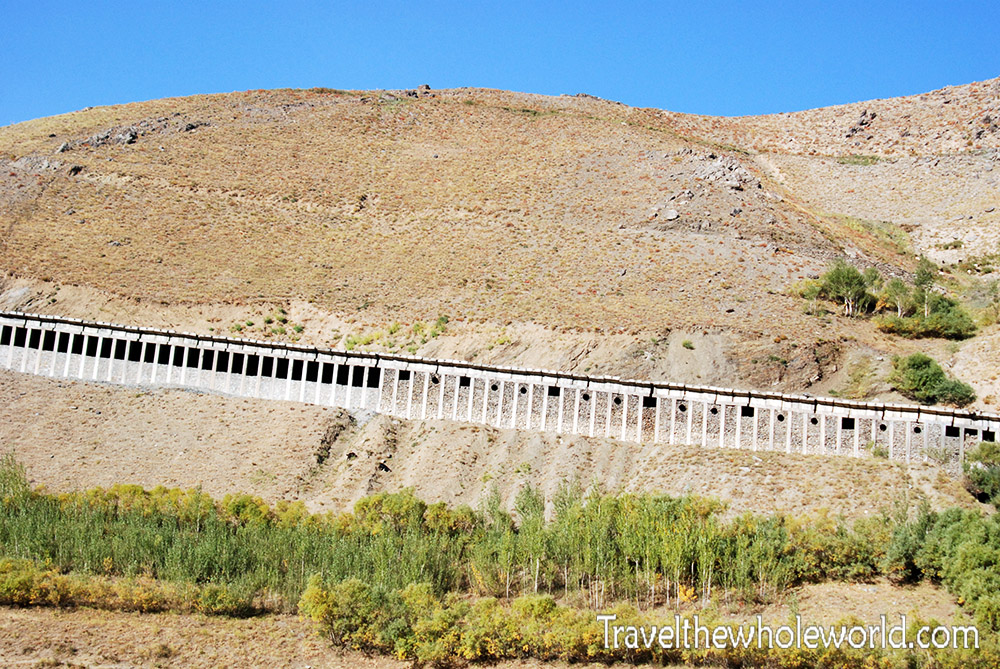 Part of the trip took us through some tunnels, such as the one above that hugged the mountain so that rock slides would pass over them. Below is one of the more serious tunnels we went through that cut inside one of the large mountains. The tunnel was a gift from the Soviet Union, but after so much war the tunnels have been neglected and the insides are badly damaged. Even with your lights on, with nothing to reflect the headlights the inside of the tunnel is nearly pitch black. Large puddles of water from leaks also make it an interesting ride! 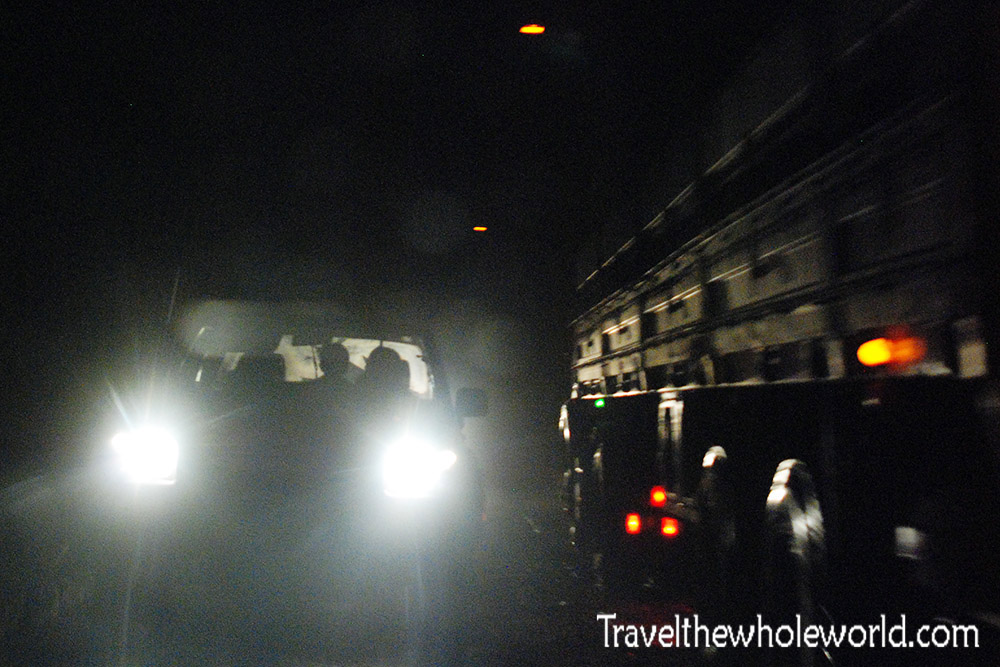 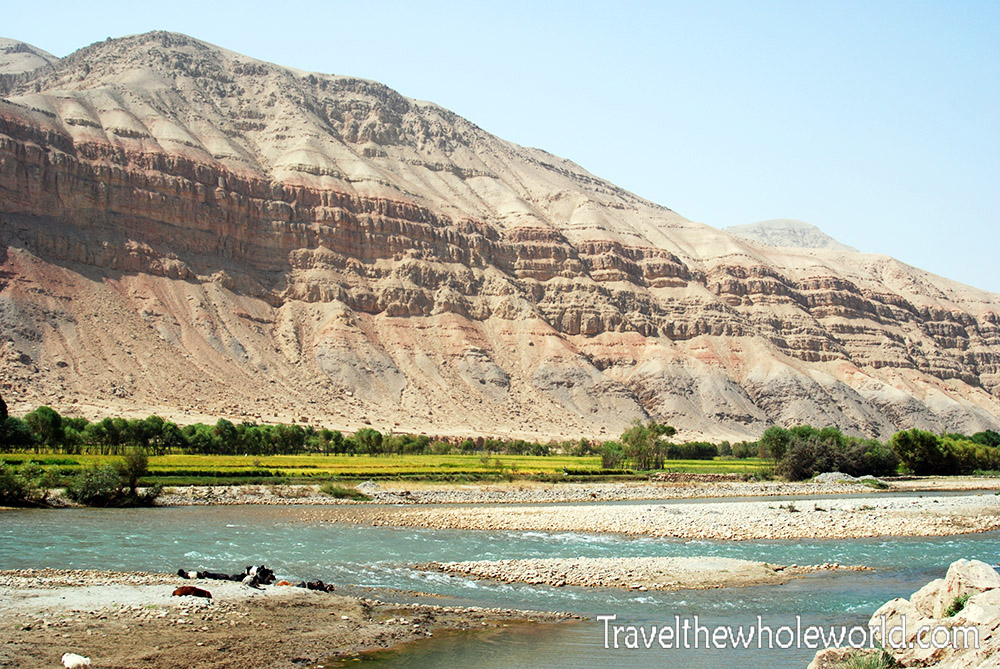 Initially I saw nothing but steep dry terrain on our road trip. After passing through some tunnels and descending down a large mountain the terrain flattened out and we found ourselves surrounded by dry land and occasional farms. By the end of the trip, the land was completely flat where we sometimes were able to casually cruise as high as 90mph. After leaving the mountains, most of the trip went parallel to a fast flowing river that allows villages to survive in this otherwise dry land. The water in the photo below looked so clear I was almost tempted to drink it. 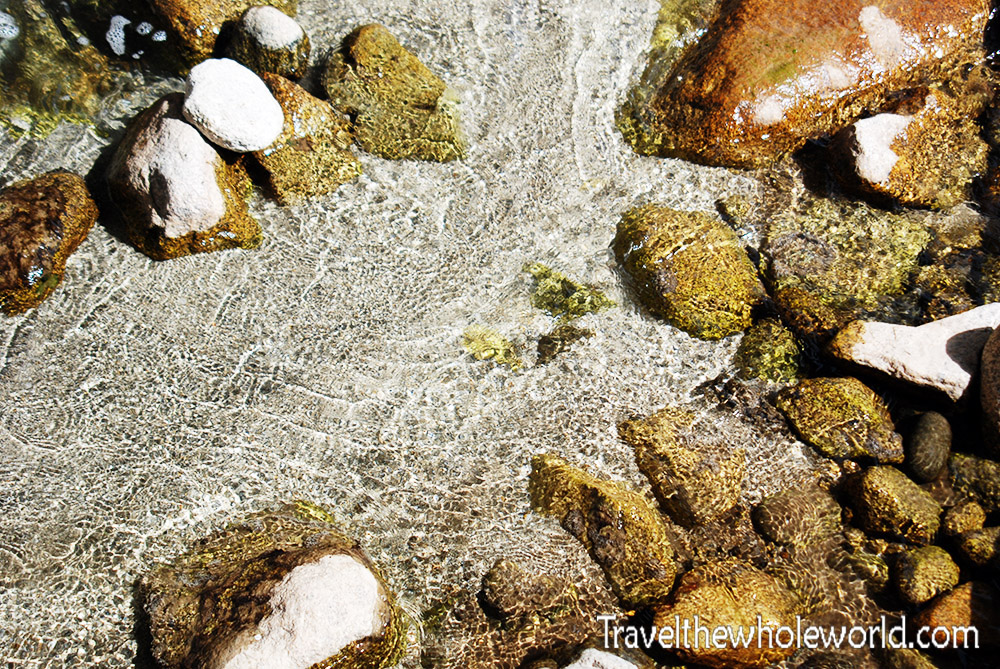 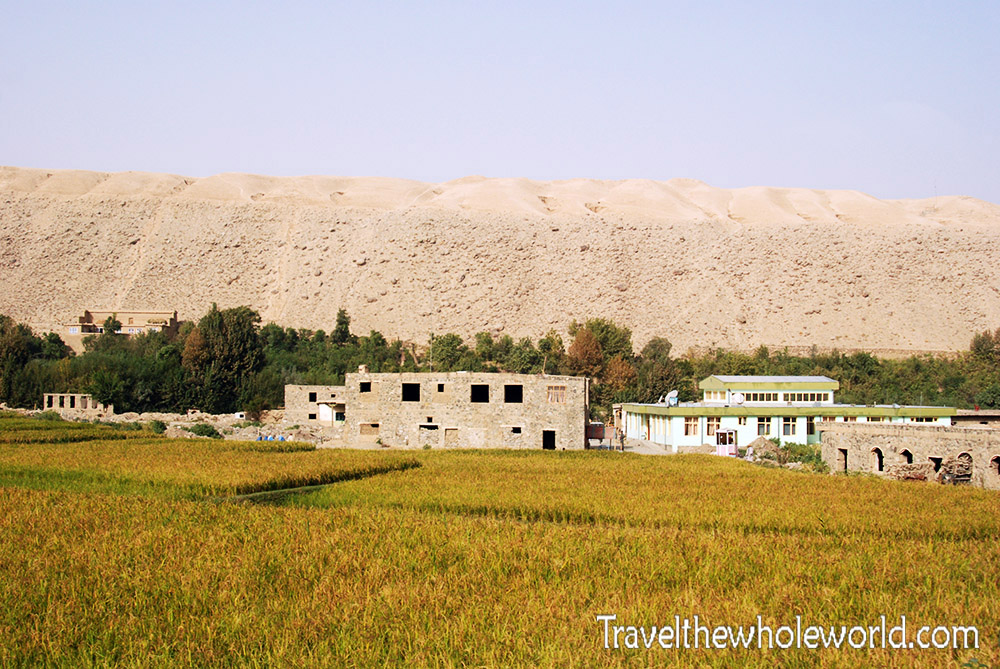 <palign=”justify”>This shows one of the simple farming villages in the north. These guys seemed to be harvesting rice, but I saw many other crops as we drove north. Even corn was being farmed here! 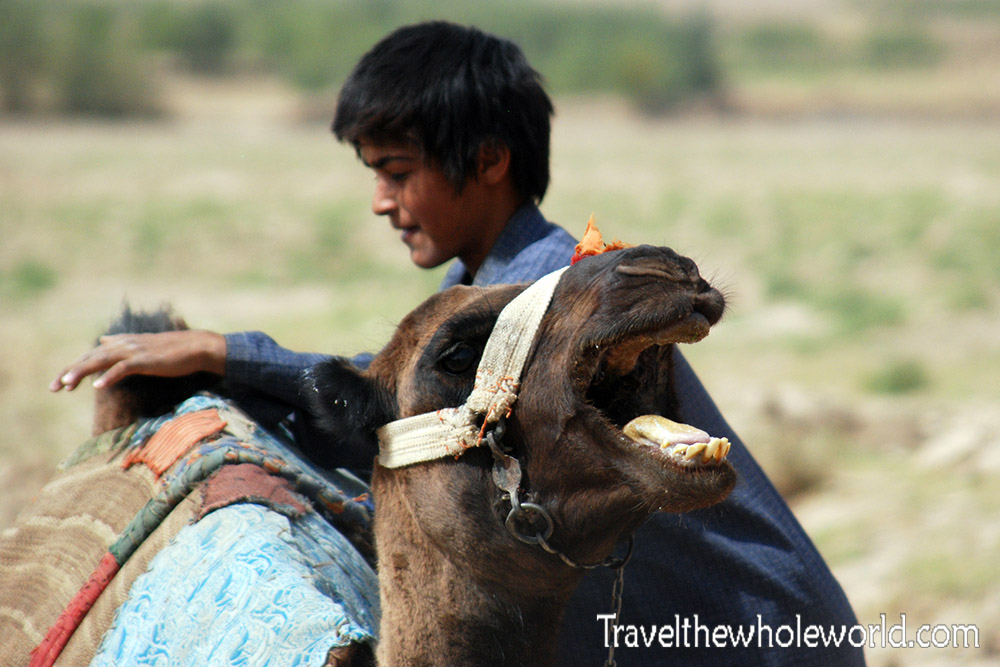 One of the places that I stopped by had some domesticated camels who were grazing in the fields. I went up to take some photos and the kids that take care of the camels decided to try to show off by jumping on them. The camels had been happily eating and started screaming after they were interrupted. I seriously thought the kids were about to be attacked but they ended up winning the battle. Above is a very angry camel, and below is one that conquered. 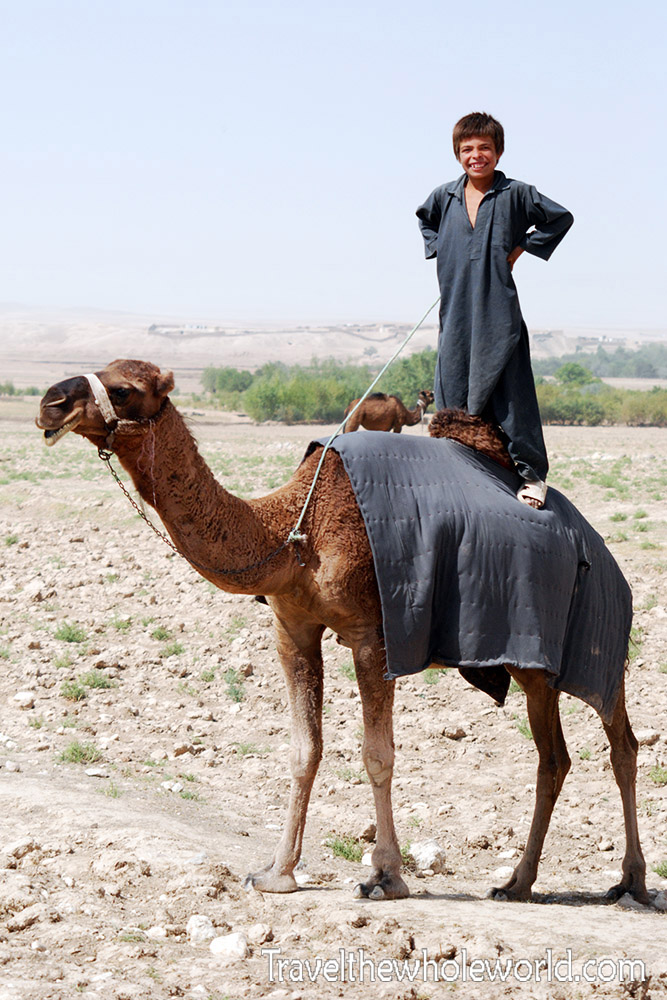 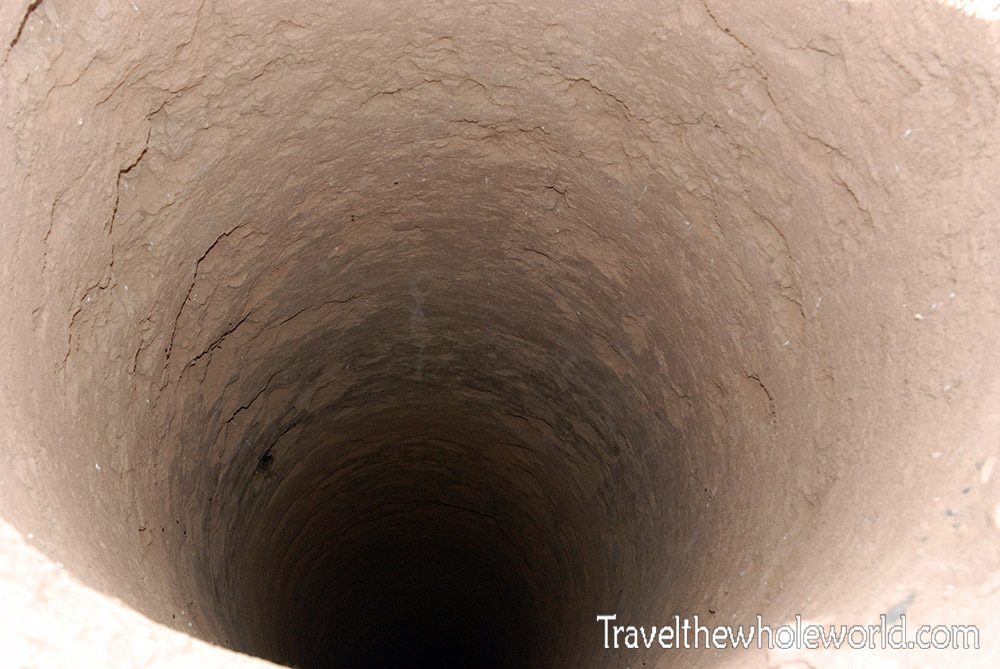 Some of the other villages seemed long abandoned and only walls and wells remained. This was a place where it seemed that little has changed over the past few centuries. If it wasn’t for the highway passing by I would wonder how often people here would see foreigners or even Afghans from other cities. 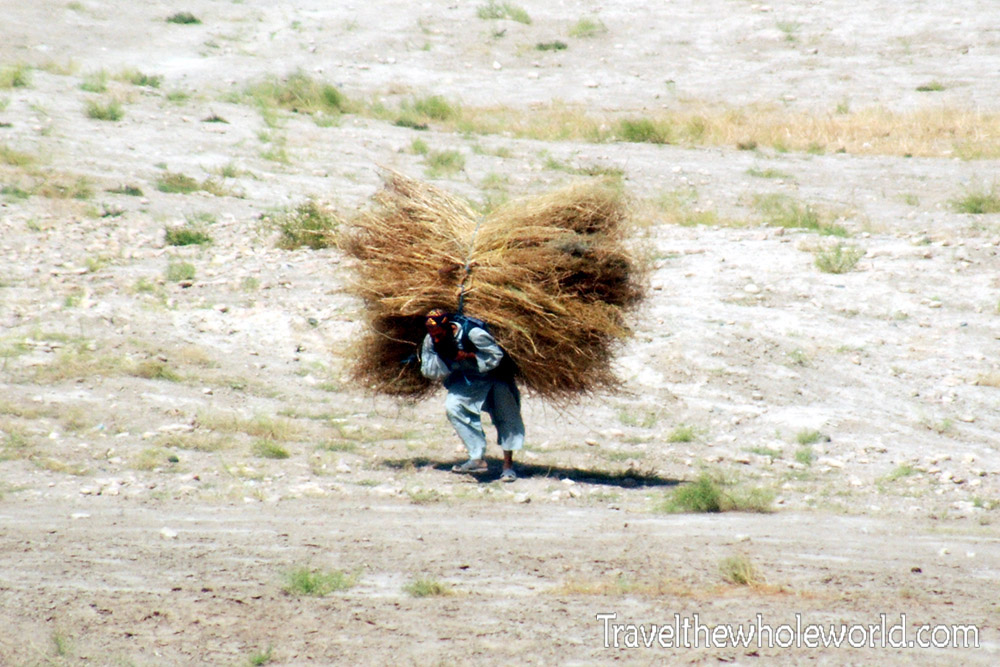 This man was in a village and can be seen carrying an enormous amount of hay. I’d normally expect a farm animal to deal with this kind of work! I suppose after a life time of this work he is probably incredibly strong and used to it. He would no doubt be prepared to climb Denali. 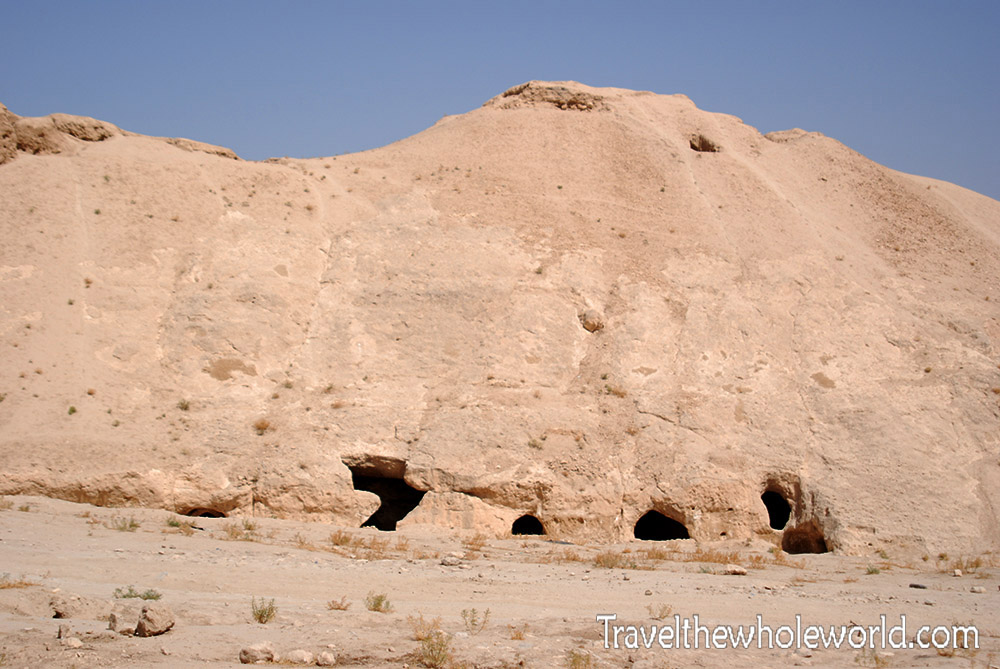 One place on the way north worth stopping at is the Takht caves. These caves were built in the 4th century by Buddhists when it was Afghanistan’s main religion. Rooms were carved out of the mountain that are connected by hallways with small holes in the top to allow sunlight. No one is sure how it was decorated or what artifacts were found once here. Most who study Buddhists in this region believe that small statues or other items were temporarily placed in these caves and moved from site to site rather than having them kept permanently here. 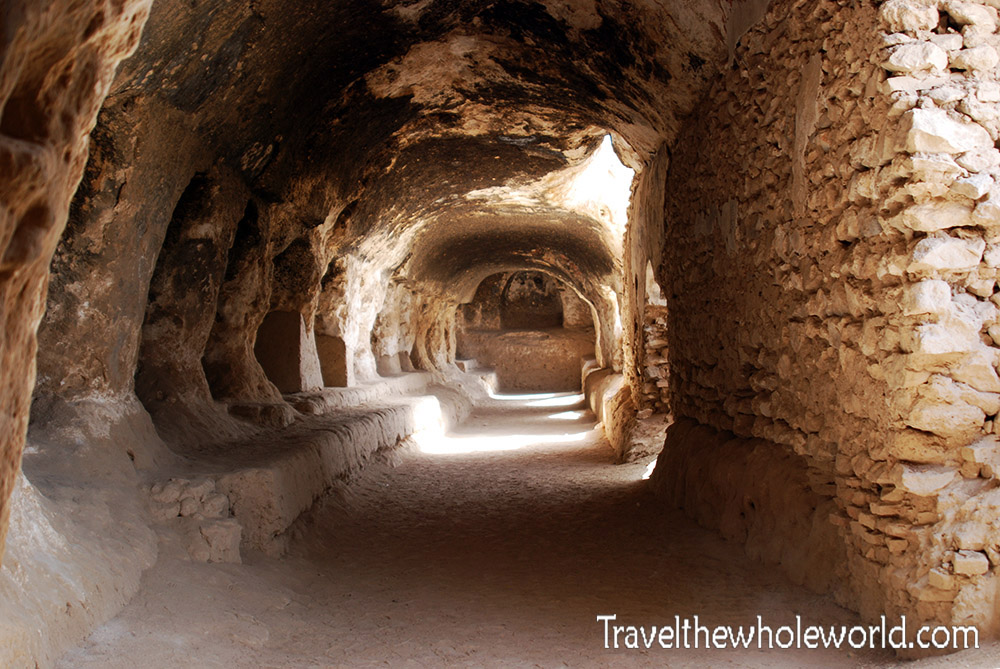 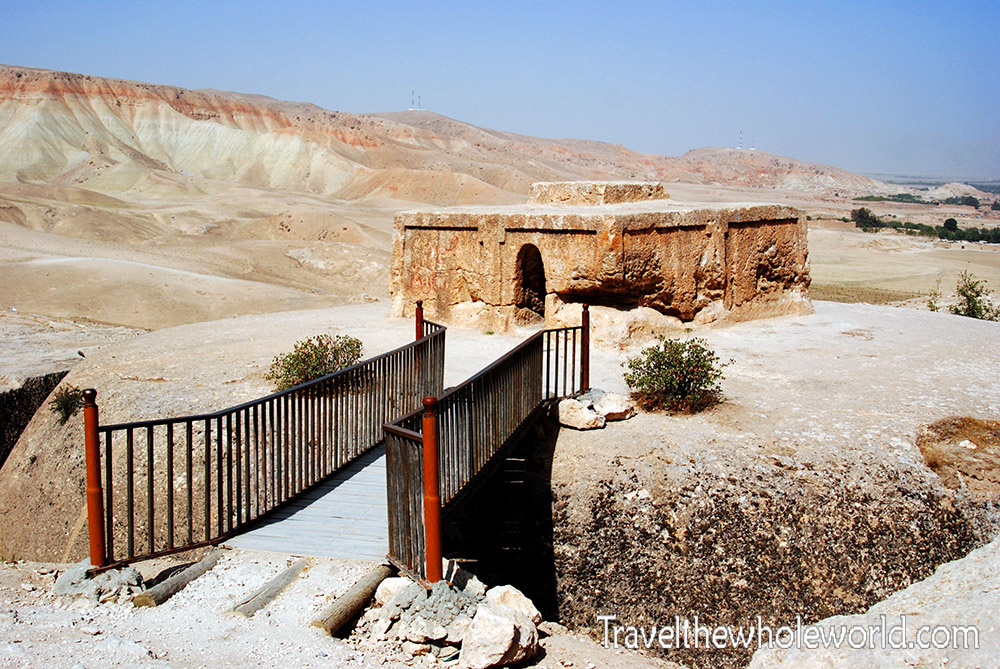 Above was my favorite Buddhist structure that was built outside of the Takht caves. So much has changed over the centuries that it’s hard to imagine traveling in Afghanistan over 1,000 years ago and find nothing but Buddhists. Known as Takht-i Rustam, it was built over 1,500 years ago and is considered to be Afghanistan’s best preserved Buddhist site. This is of course because the Taliban destroyed the giant Buddhist statues of Bamiyan. The Takht-i Rustam stupa is unique because it was entirely carved out of the mountain instead of being built upwards. Many ancient artifacts here were believed to have been long looted, but it still remains a beautiful building and definitely worth visiting.