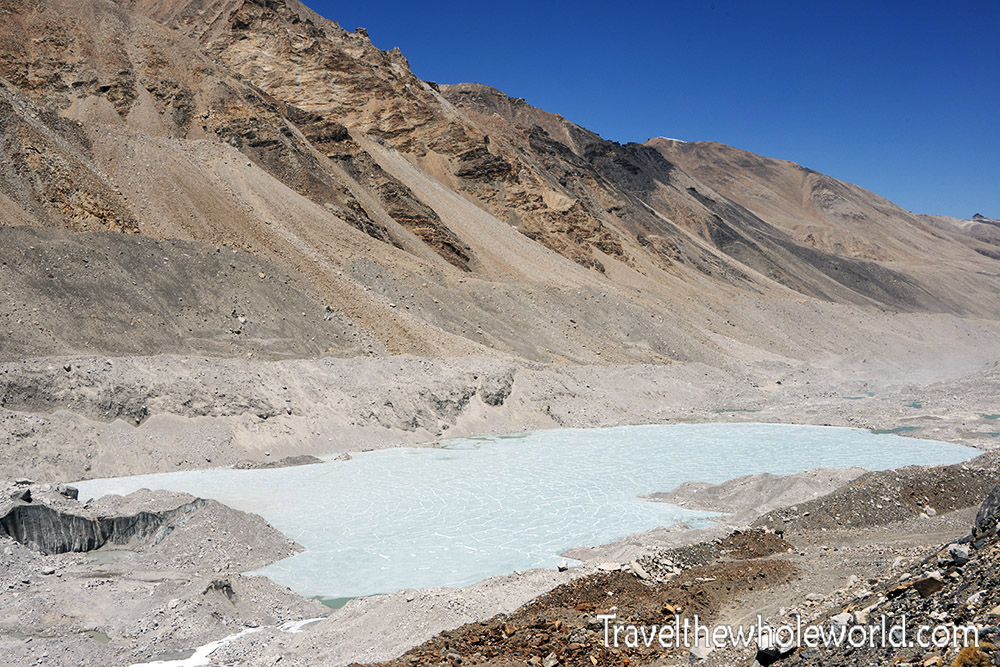 The trek from Everest Base Camp to Advanced Base Camp is 15 miles (24 km) and typically takes two to three days. Most climbers and hikers can easily reach Interim Base Camp, or IBC in about five hours. Since IBC is located at 19,000 feet (5,800 meters), many spend two nights here to help acclimatize on the first visit. The trek to IBC from Base Camp starts off through a gentle valley that heads directly towards Mt. Everest. Along the way, I got a beautiful view of this frozen lake photographed above. 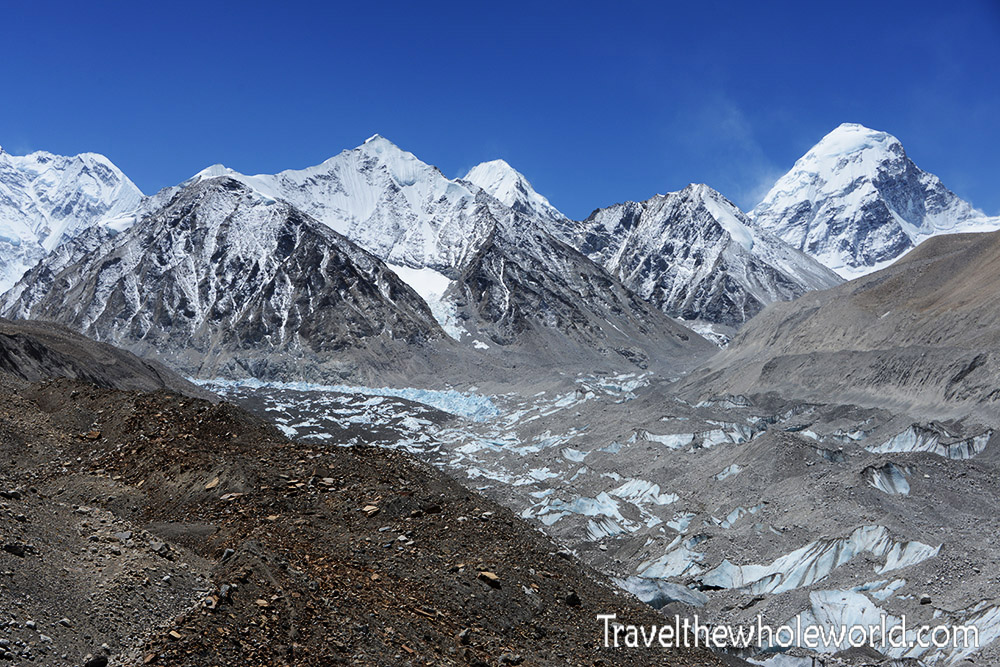 The first valley takes about 90 minutes to hike to the end of it. As you get closer your view of Everest will disappear, but you’ll see other famous mountains such as Pumori which is on the right side of the photo. Pumori is right next to Nepal’s Everest Base Camp, and is close enough that we actually had hiked up Pumori a bit last year to acclimatize when I attempted the mountain from the south. Just over the ridge and in front of Pumori is the largest mountain base camp in the world! I had met people last year who had returned to the Nepal side, which meant some of my friends were just out of view. 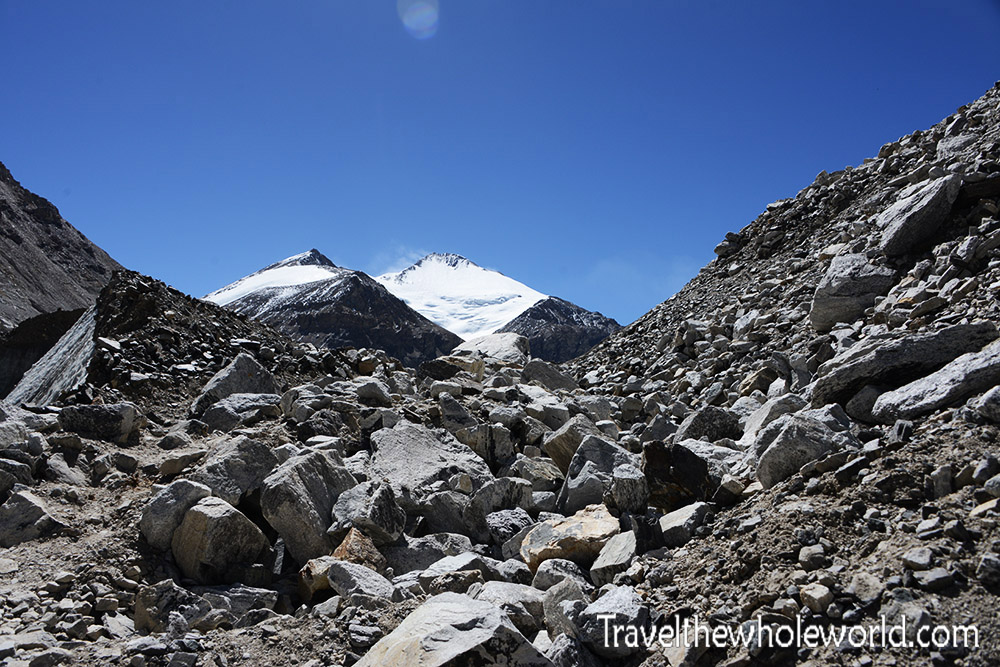 Once you end the first valley, you’ll approach a mountain called Changtse. Mt. Changtse sits directly in front of Everest and so you’ll have to spend two days circumnavigating it to get to the true base of Everest. Making a left into the second valley puts you in a steeper valley that follows a frozen river. The trail also becomes more scree like and a bit more annoying to hike on. 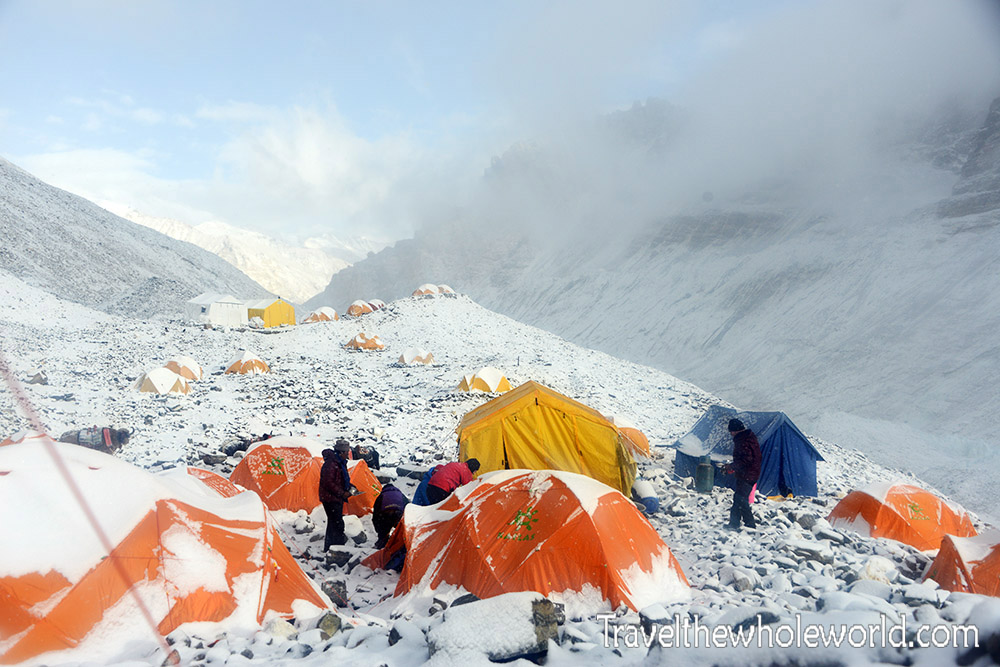 There are some small ice cliffs that you pass by that I didn’t photograph, otherwise the terrain isn’t too different except for the frozen river. After about five hours of hiking you’ll arrive to Interim Base Camp. Excluding the obvious problems from some of the high altitude camps, IBC is by far the worst camp on the mountain in my opinion. Like its name, it’s simply an interim camp between Base Camp and ABC. Some skip IBC on the way up after acclimatizing, and almost no one stays at IBC on the way down. The camp is fine weather wise, but it’s covered in trash and yak shit. There’s no good source of water here, so it’s easy to get sick. The water that you do treat and boil, seriously tastes like yak and hay. On the first night we arrived, we had a bit of snow which certainly changed the feeling, but regardless this isn’t a place you want to stay long. 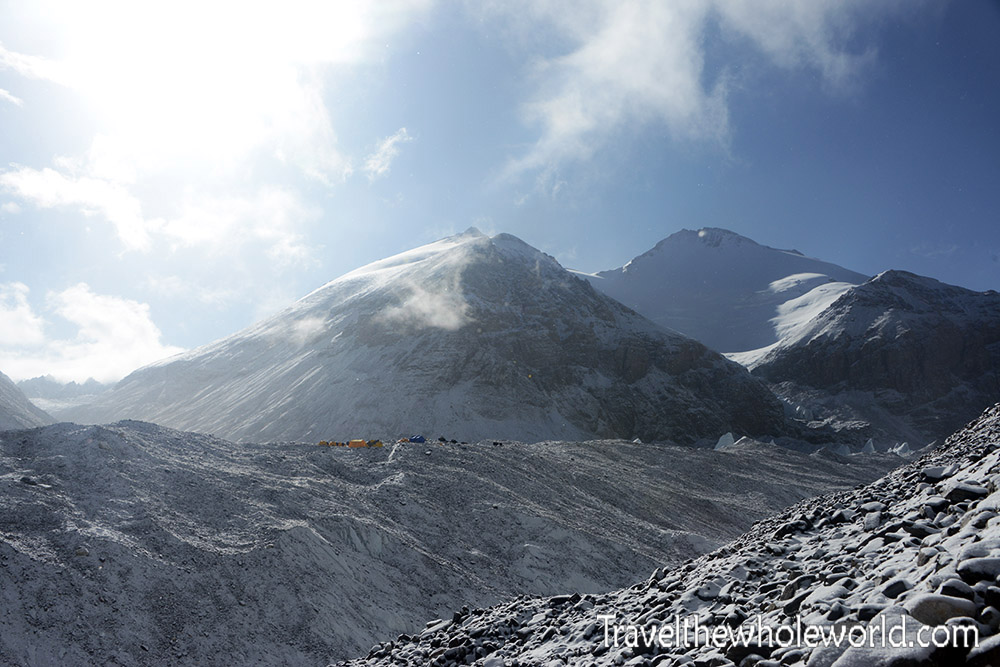 There is a large rift between IBC, and there are camps on either side. Ours was on the first side, which meant in the morning we had a large hill to descend followed by an extremely painful uphill climb. The hill doesn’t look so bad in the photo, but it was by far steeper than anything we had encountered so far from Base Camp! 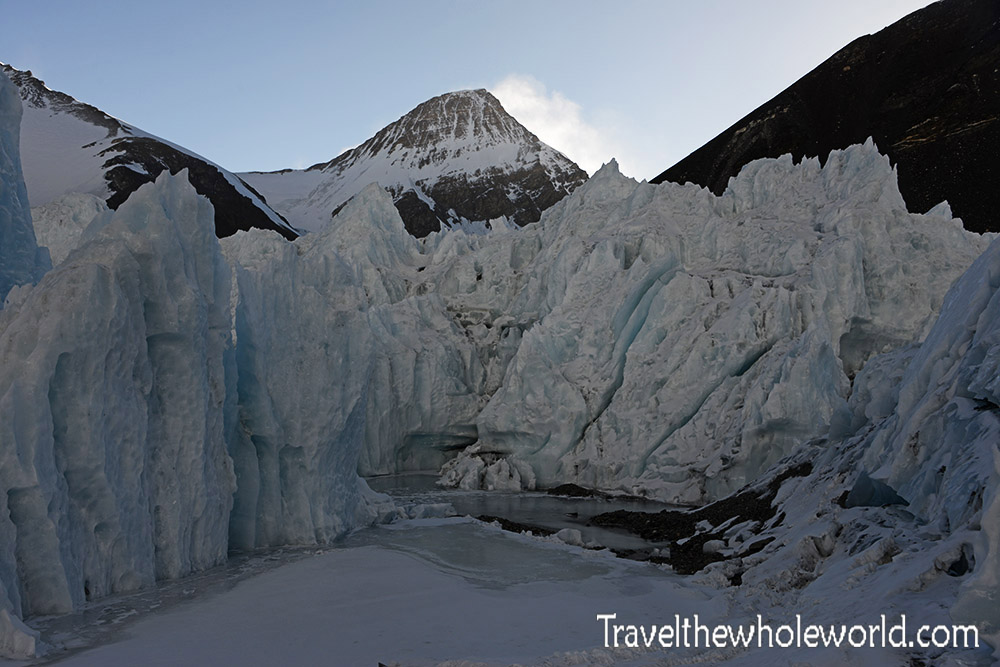 The trek from IBC to Advanced Base Camp is much more scenic. Along side you get some amazing ice formations like in this photograph above. Below is a photo of a phenomenon known as penitentes. These unique ice formations exist at high altitudes, and usually point towards the sun. The first time I ever saw them was in the Andes when I climbed Aconcagua. I don’t recall seeing them very often in other mountains, but regardless these were by far the biggest I had ever seen. The Penitentes continued up the valley as far as the ice could see. Some of these easily reached 35 feet (10 meters) in height. 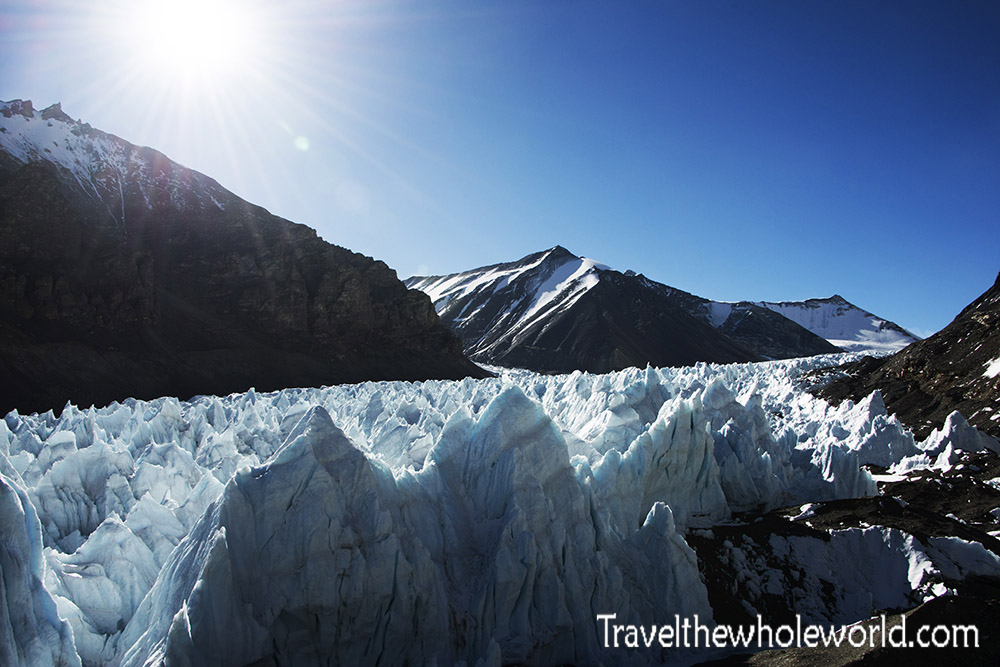 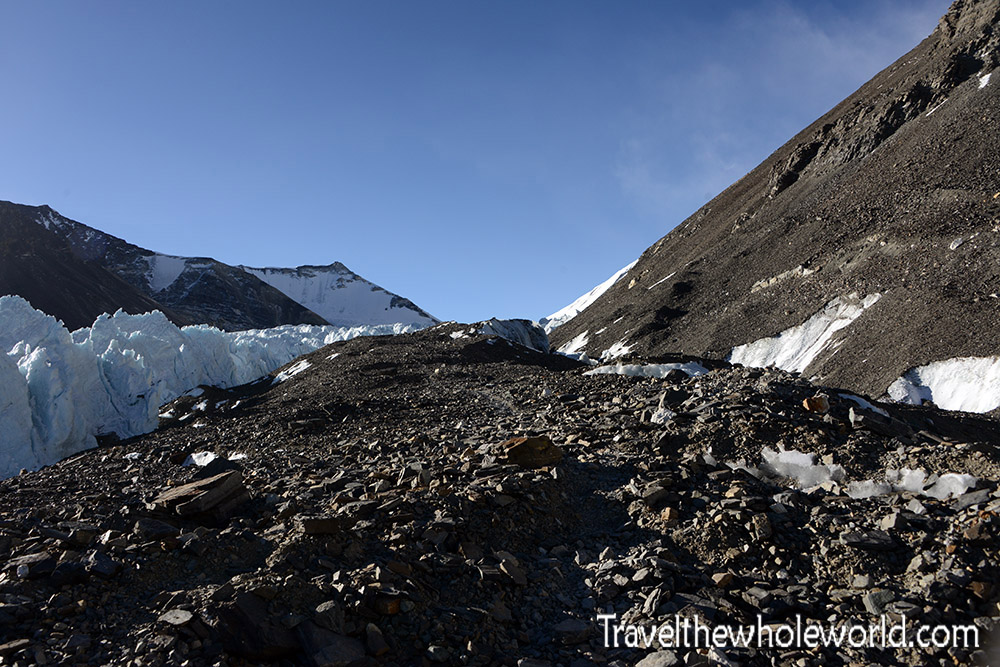 The trail to Advanced Base Camp, or ABC continued on loose rock and scree. The worst part of the trail is what I called Pyramid Ridge. Pyramid Ridge looks like a ridge made out of a string of small pyramids over a long distance. The narrow ridge had lots of annoying ups and downs. None of the ups or downs were serious, but at 20,000 feet (6,000 meters), every steep section required a lot of strength. 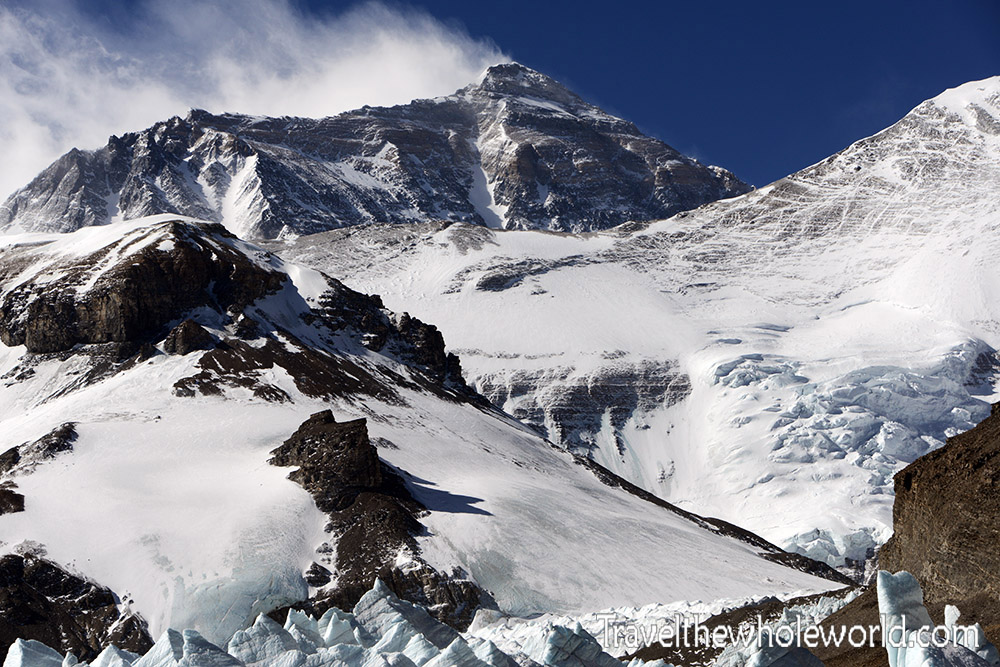 The only saving grace to Pyramid Ridge is that it gave perhaps the best close up view of Mt. Everest that I had ever seen. Parts of Changtse and other ridges were still in front of Everest, but from here you could easily see the final ridge going towards the top of the world. It was a much better view of the mountain from the Nepal side, and so far on this trip the closest and most personal view of the summit yet! 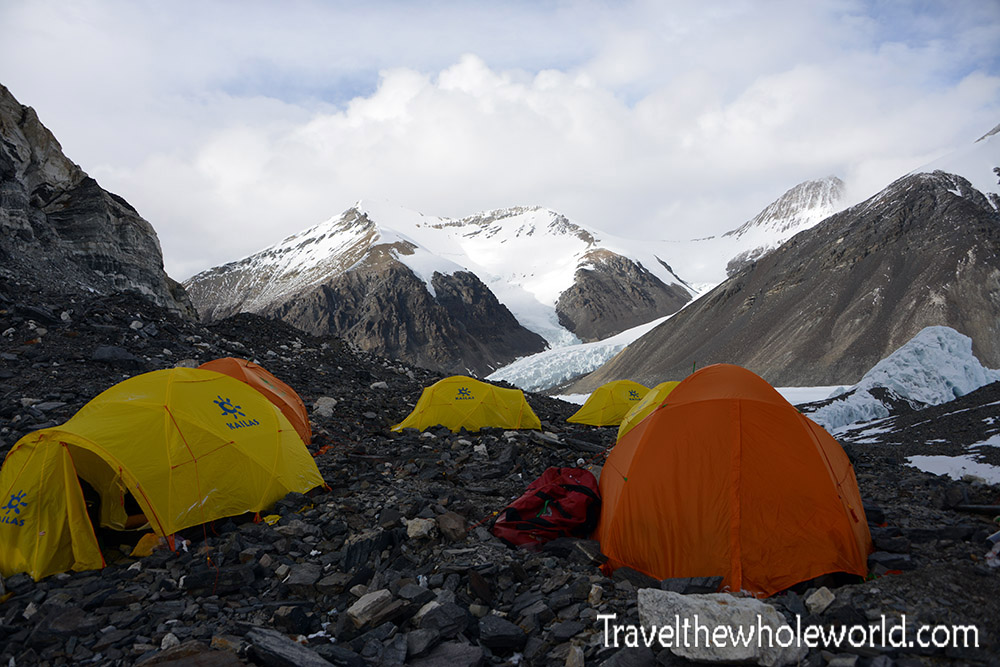 The trek from IBC to ABC takes about seven hours on average. The entire time its a scree trail that you can’t really get lost on. For acclimatization purposes we had to do this trek three times, the first time I felt it easy until the last hour. The last two of course did not feel very challenging but I was always happy to have arrived. Above are some tents from my expedition in ABC. 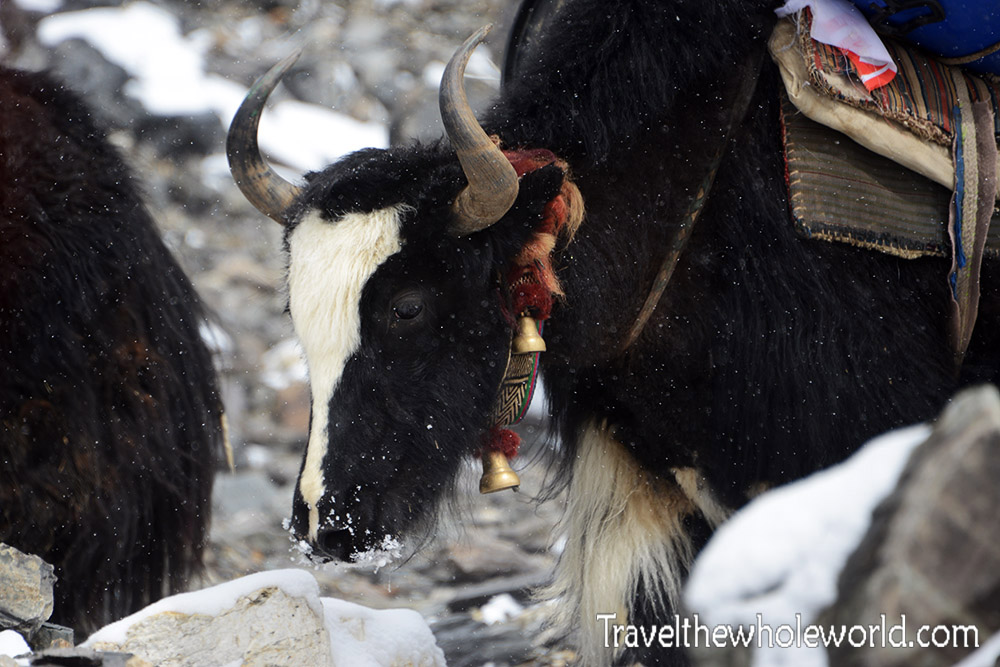 Advanced Base Camp is much more enjoyable than Nepal’s ABC. The problem with the Nepal side is that everything must be hand carried through the dangerous Khumbu Icefall. On the Tibet side, yaks can actually make it all the way up to ABC and can carry much better quality food and supplies. Above and below are some shots of yaks I took in ABC. One of the days we were in ABC, a young yak herder somehow got the yaks between our tents. One of the yaks ripped off an anchor point from my tent and my friend got a horn that punched through his! 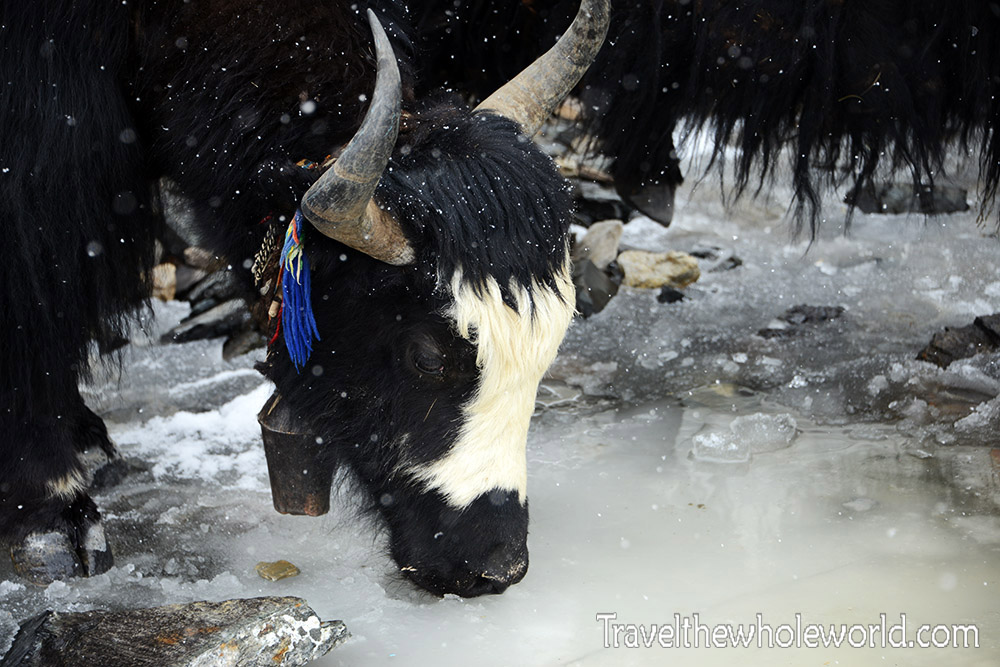 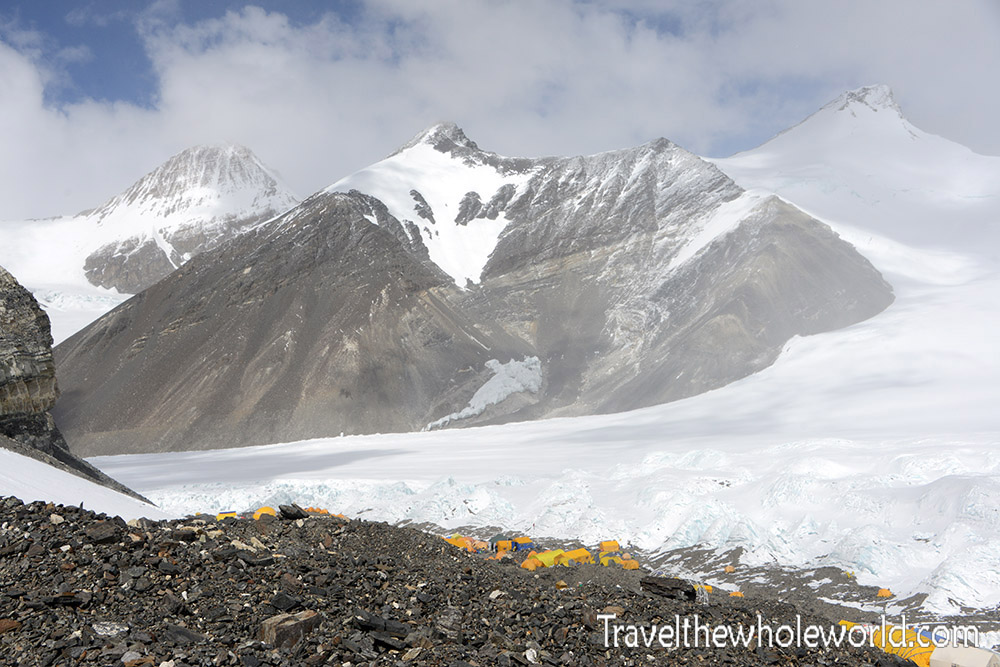 It’s most definitely colder in ABC versus Base Camp since you’re so much higher but easily manageable. When I first arrived to ABC at 21,000 feet (6,400 meters) I felt pretty terrible. I definitely had a headache, although not a pounding one, among other issues. I was sneezing a bit of blood and felt like I had no energy. I just felt overall sick and wanted to go home honestly. I found this pretty alarming since I didn’t have any altitude problems last year. Most altitude problems can be fixed by going to a lower altitude or taking it easy and letting your body catch up. After a few days in ABC I completely recovered and felt normal again. 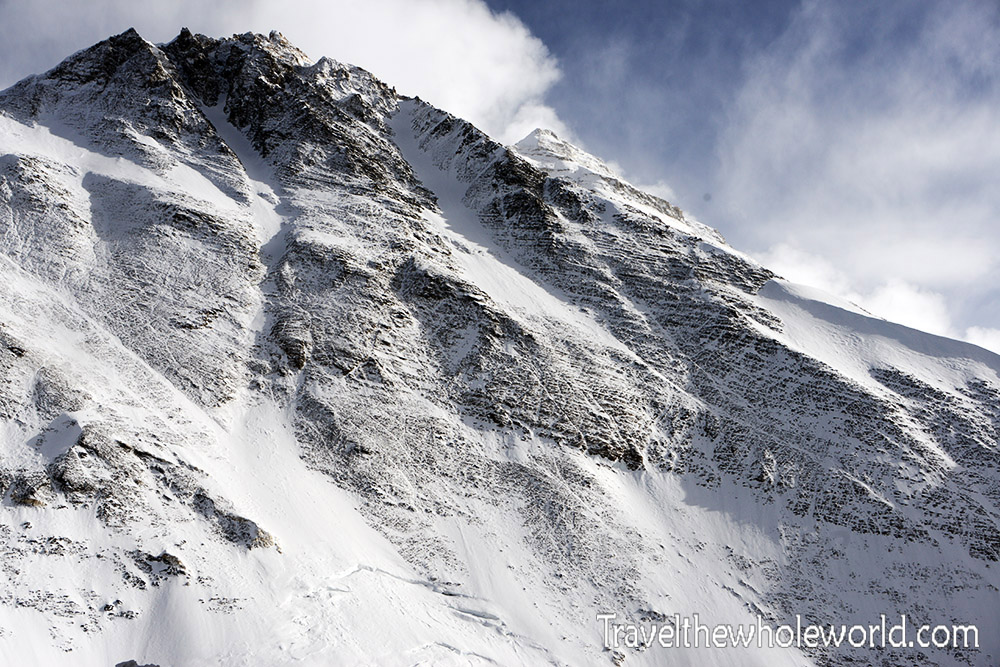 If you’re curious about the view from ABC of Mt. Everest, it’s not too impressive. The northwest ridge that comes down from the summit dominates the view. The top of the world from this vantage point appears as an insignificant peak hiding behind the ridge. Luckily I had my DSLR camera and was able to take a shot at full zoom. Below you can see the top of the world as viewed from ABC! 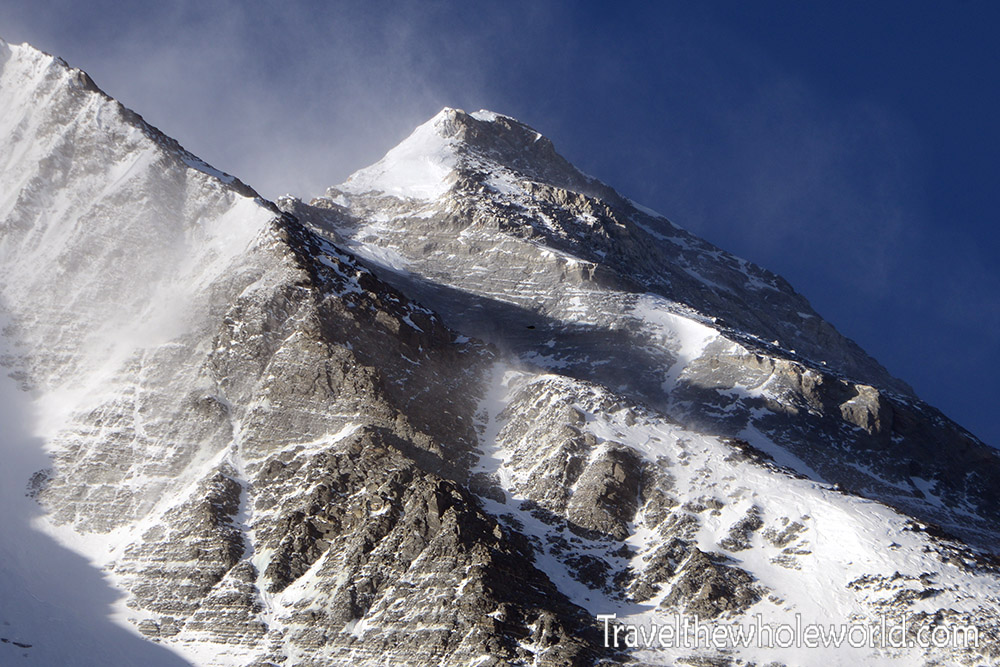 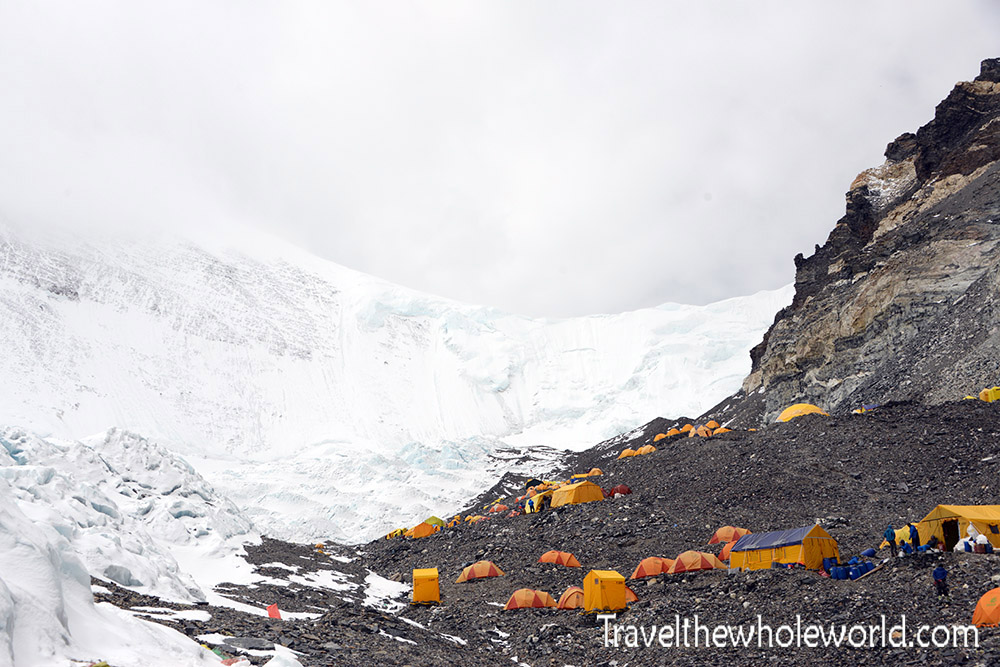 Lastly after nearly a week in ABC, the next challenge awaits. From Advanced Base Camp, you finally take your first foot steps on Mt. Everest as you climb up to the North Col. The North Col exists as a narrow ridge between Mt. Everest and Changtse. Getting there requires all your mountain climbing gear and is the cross over point from hiking to actual climbing. The photo above shows tents in Advanced Base Camp with the North Col in the background.