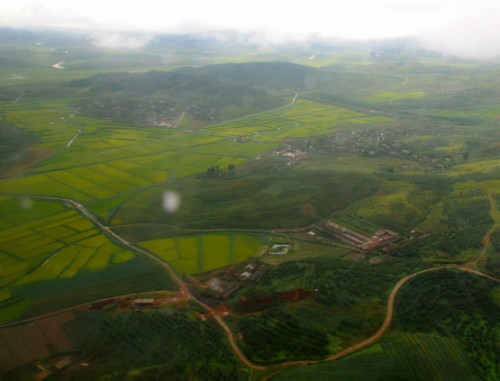 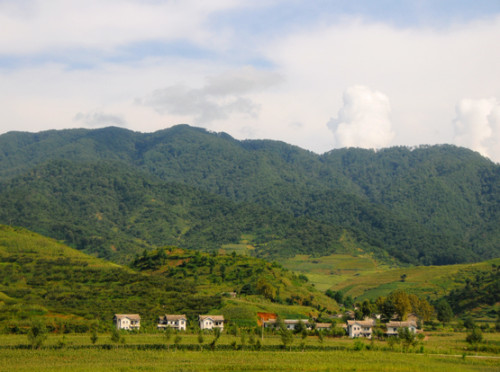 Outside Pyongyang are many farms and rural communities. The first photo on the left was actually taken from the plane as we pulled into the country, my first impressions were bright green farms and mountains, and surprisingly the first country that came to mind was New Zealand. 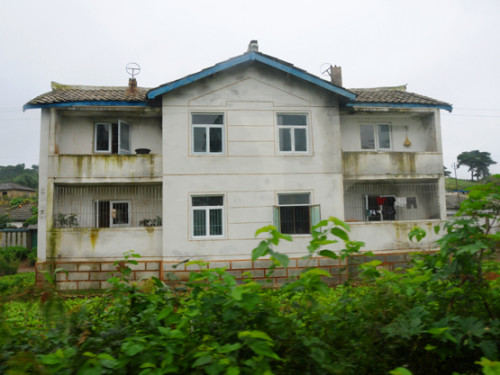 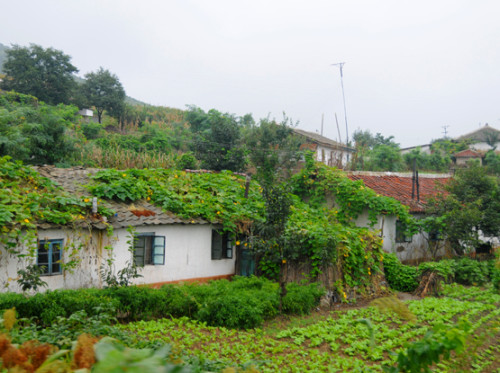 On the west coast, not too far from Pyongyang is the city of Nampho. This place started as a small fishing village but because of its location, it is now a major port for the North Korean government. Most of their exports and imports come through here, and there is also ship building that takes place here. The area is surrounded by farms as well, with a photo of an apartment building on the left and a house on the right. 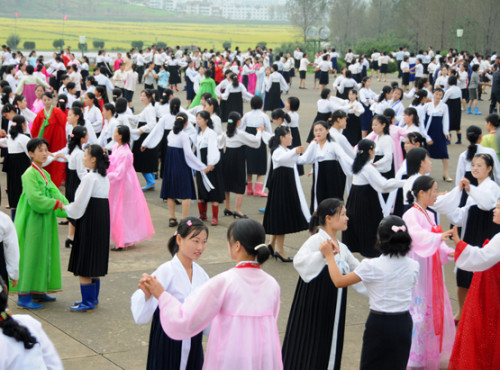 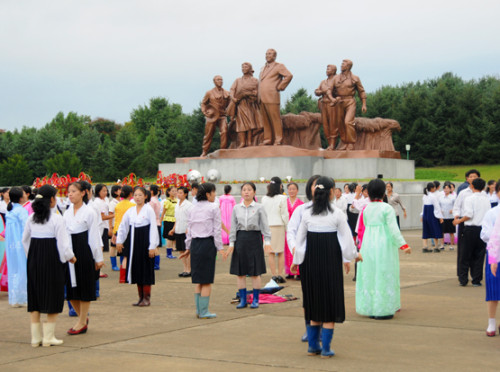 September 9th 1948 is the official date of the creation of the North Korea, or the Democratic Peoples Republic of Korea. I was traveling here during this time, and though I wasn’t allowed to see most of the festivals taking place, I was able to see this huge dance going on near the city of Nampo. This was made up of about 80% women it seemed, and had a line of North Korean soldiers on all four sides of the square. 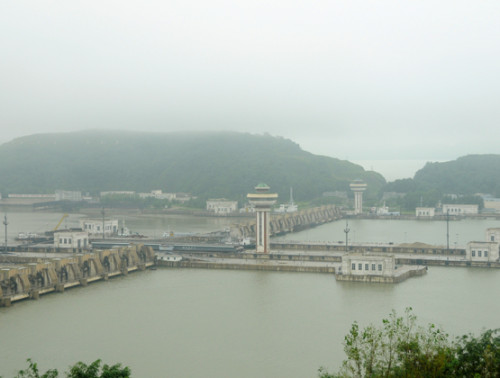 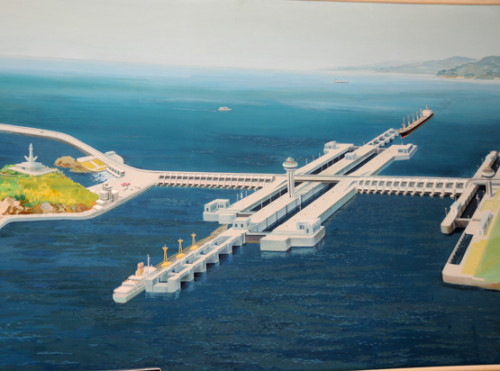 Located in Nampho, is North Korea’s most prized architectural achievement, the West Sea Barrage. Built to solve problems of the rising sea water into the Taedong River, which created brackish water unsuitable for farming, the country got to work to begin this massive project in 1981. The dam spans nearly 5 miles across the water and separates the sea water from the river, and has several sluices that allow the passage of ships. To western nations, this might seem like a simple project, but to North Koreans it is one of their greatest accomplishments and could only be done under the leadership of Kim Il Sung. The day I visited this place, there was hardly any visibility because of the stormy weather, so in addition to a real photo I took on the left, I took a photo of a drawing they had inside an office to better show the barrage. 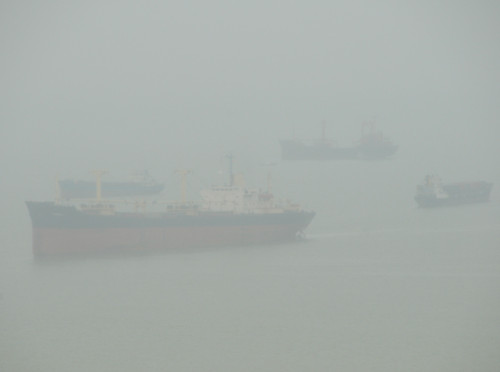 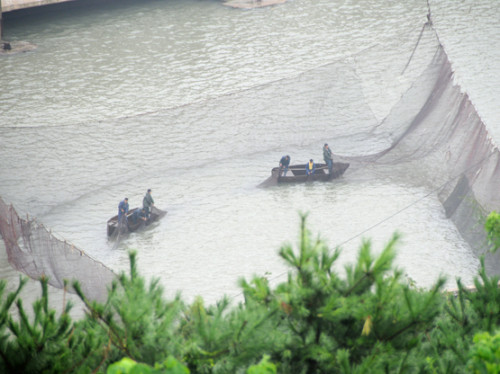 The upper left photo shows a large ship about to enter the locks of the West Sea Barrage. I had to leave before it actually entered so I wasn’t able to see the process, but was told it only takes about 5 minutes. I’ve no idea what the guys on the upper right hand photo are scooping up. 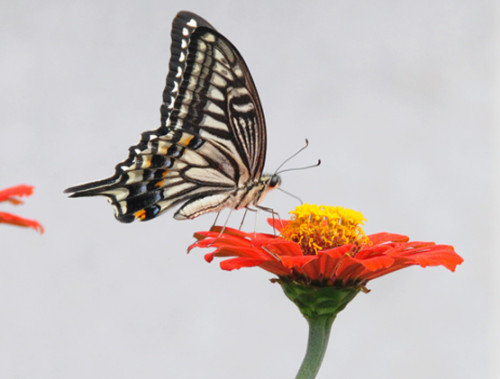 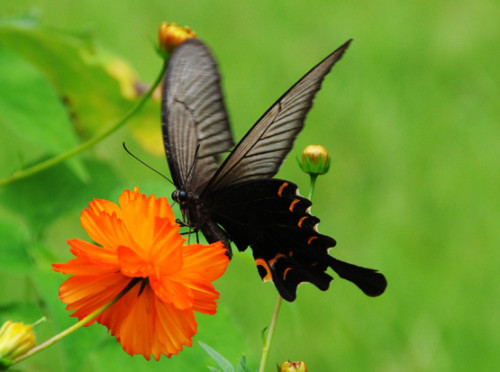 I’ve only four wildlife photos to share with you from North Korea. I saw the upper left butterfly several times throughout the country, but the one on the upper right looked much more exotic because of its strange tail. I’ve no idea what type of species they are, but they were pretty much all I captured with my camera. Very late in the evening, I did come across some trees in Nampo that was filled with dozens of white cranes. I’ve never seen that many cranes together, but unfortunately it was way too dark to get any type of photo of them. 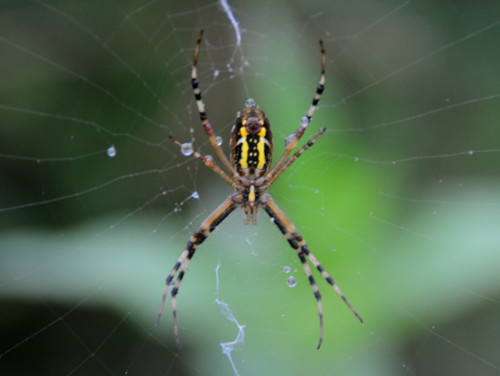 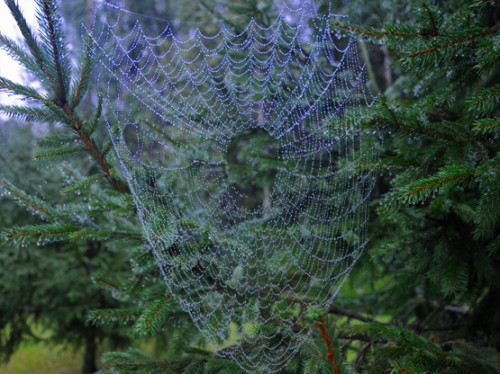 After some light rain in the night, there were hundreds of spider webs one morning in Nampo covered with rain drops. Out of all the spider webs I saw, the guy on the right was the only spider that appeared to be home. If I return to North Korea again, my new priorities will be to visit some natural areas along the east coast, and the country’s highest mountain which is called Paektu-san located on the border of China. This mountain has a lake filled crater on its summit, and is scene in posters and paintings all over North Korea. I think it’d be an excellent place to view some real wildlife, and probably would provide some great hiking and camping if such activities are allowed here.