After visiting more than 50 countries, I believe West Papua is easily one of the most remote and unique places I have ever been to. Just getting to Carstensz Pyramid is a serious adventure by itself, and such a trip is nearly impossible to organize on your own.
Attempting to independently obtain a permit may take over a year, and even then your permit might turn out to be false after your arrival! I’ve heard plenty of horror stories of people paying up to $5,000 (which would be cheap by the way) for a climbing permit and then begin their trek to the mountain – only to be turned around by authorities due to invalid permits. This is best left to an Indonesian who has experience, ties to the government and most importantly a good reputation. This is what worked for me, and by doing so I had the burden taken off my shoulders and all I had to do was show up in West Papua. Showing up in West Papua wasn’t all that easy though, I had to bounce around more islands than you can image on my way there! 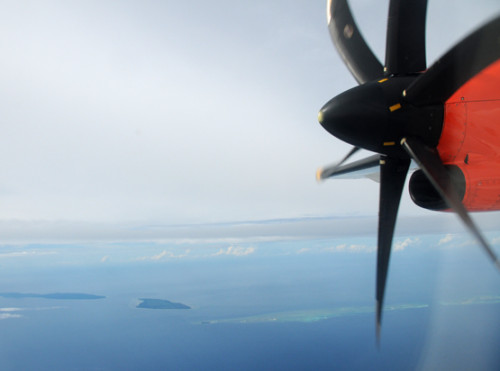 My travels began with a flight from Virginia to New York, to Vancouver, then Hong Kong, to Jakarta, to Makasar, then Ambon to Sorong and finally landed in the port city of Nabire on a prop plane! 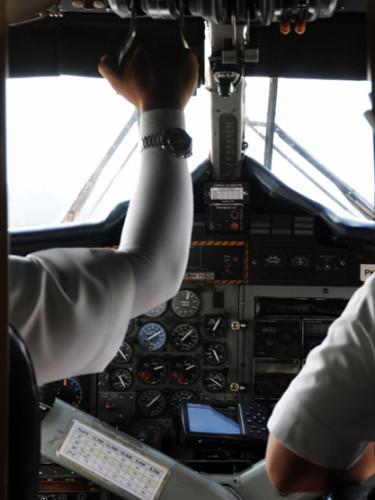 The flying definitely took a toll, and even from Nabire I needed a final flight on a charted aircraft to the center of West Papua. Our destination there was a small village known as Sugapa. My original plan on this trip was to fly to Tamika instead of Nabire, and from there take a chartered flight to a village called Illaga. Tribal and political violence created fuel shortages in Tamika, so it wasn’t possible to land there. I was aware of the protests and military lock down in Illaga, and I worried about a similar problem happening in Nabire. 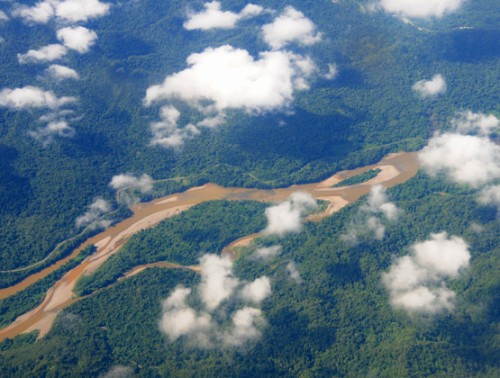 Fortunately when I arrived to Nabire everything seemed perfectly normal. My only issue in Nabire was after checking into the airport. We were told we had to pay $50 just to wait at our gate! We declined this generous offer and instead went to a restaurant to pass the time and returned right as the plane was ready for take off. We flew over an untamed and remote rain forest that stretched as far as I could see. Above and below are some photographs from the flight. 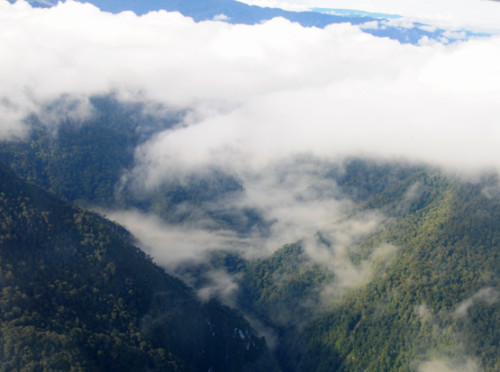 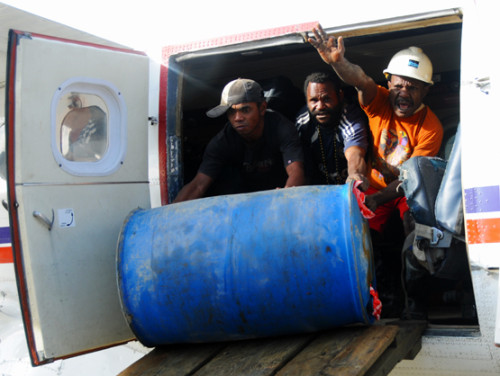 Since Sugapa is isolated by the rain forest and mountains, planes are the only connection to the rest of the world. Almost every flight that comes in brings supplies for the villages as well. Motor bikes and your own two feet are about the only means of transportation once you arrive. 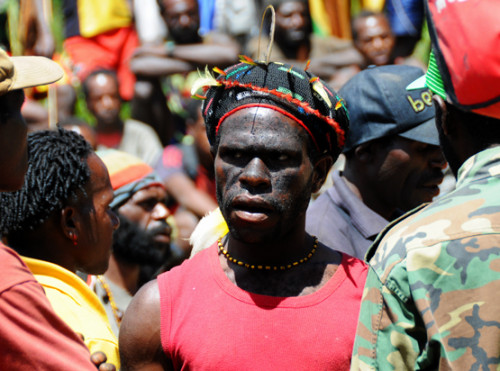 You can see an obvious difference in the appearance of the local people compared to the Indonesians living in Nabire. My understanding is that around 60 or 70 thousand years ago, Aborigines from Australia crossed over into the island of New Guinea. Some of these guys looked intimidating but many were quite nice once you tried to talk to them. They also were very short in height; it seemed the average male was around 5’5 (165cm). 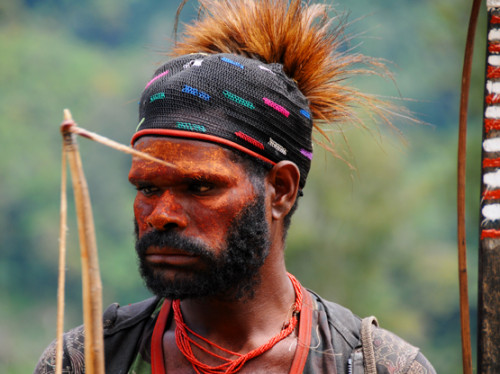 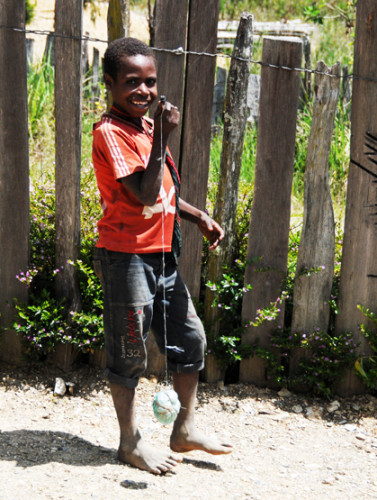 The children living in the villages were probably the poorest I’ve ever seen. The kids have come up with some creative ways to have fun, such as the ball of trash turned into a toy by rolling it up and tying a string to it. I also saw several different children who had taken some vines and rolled them together to form a wheel, which they would chase down steep hills. 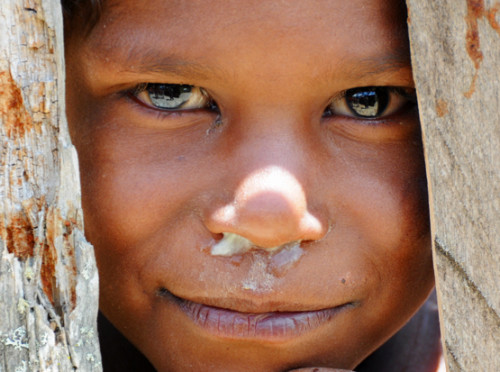 The picture on the right is sadly common on almost every kid’s face. I’m not sure what the cause is of their sickness or congestion, but I saw dozens of kids with runny noses while the adults didn’t seem to have this problem. I realize you can’t help your nose running, but it drove me crazy that they allowed it to run down their face all day without wiping it off. Some children allowed it to stay on their face long enough until it froze into a bright green stalactite. 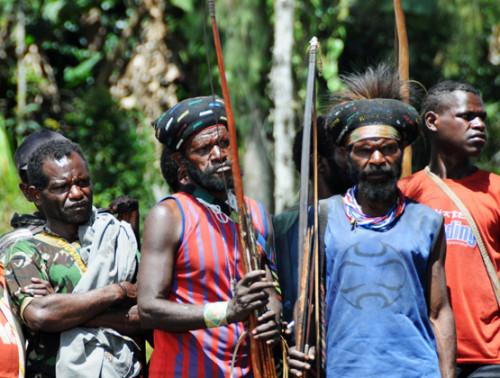 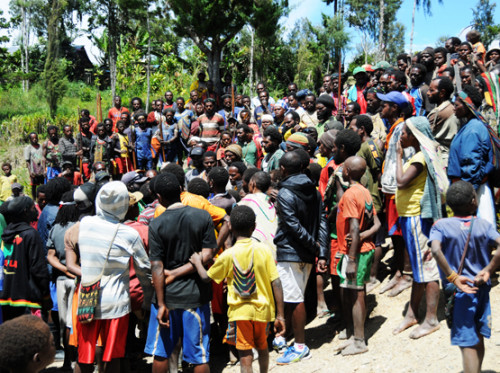 These people rarely come into contact with Westerners. Pretty much the only foreigners passing through here are either for Carstensz or missionaries. These occasions do not happen often, so our arrival to Sugapa was a big deal to the locals. It wasn’t until later that I realized this huge village gathering right outside my hut was for us. Despite being isolated from the rest of the world, the local tribes in West Papua know that when foreigners pass through your land there is a price to be paid. The only way to pass through the villages is to hire some of the people as porters. The right photo shows one of the leaders deciding the group of people to be our porters for the journey to Carstensz Pyramid. There was a rumor that the porters were paid hundreds of dollars each to join the expedition. You can imagine that in a land were most people make less than a $1 a day, how incredible it must be to make a few hundred bucks in just two weeks. 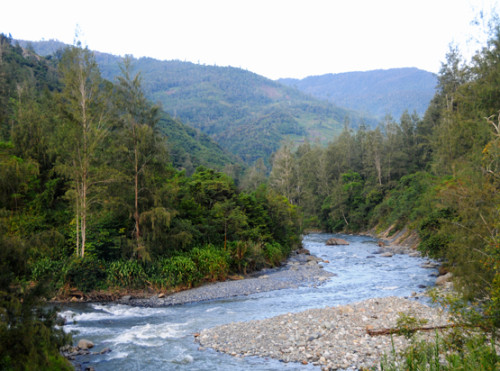 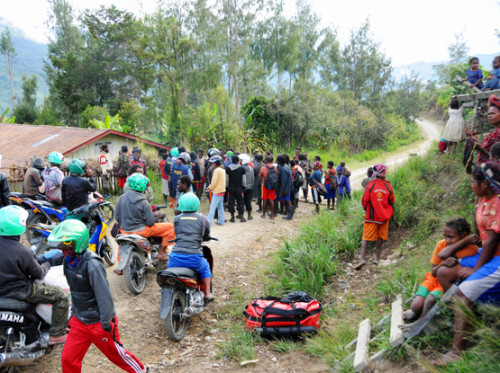 After the villagers seemed to have finished their debate, we were all taken down on motorcycles to be dropped off at the starting point of our long trek. The ride was fast and dangerous but refreshing with the strong winds in the hot dry day.
Members of my team also riding on motorcycles had left before me, so I was surprised when I was dropped off by a river all alone. From the second I was dropped off, I was nervous about something that might have gone wrong. I passed the next 30 minutes by thinking of a wide range of problems that could have possibly happened. They ranged from someone falling off a motorcycle to perhaps me being dropped off at the wrong point, and the expedition departing without me. I attempted to ask the locals around me for information but no one spoke English.

When I approached the bridge over the river, men with machetes and bows and arrows motioned me to go away and to sit down. Not only did I not know what was going on I was unable to leave. After another long wait, a motorcycle finally came to pick me up and took me back to our hut. There we were told the local people were arguing about money again and had refused to let us pass through the village. The debate continued until darkness came and a full day was wasted. We had no choice but to spend the night in Sugapa, which was never part of the plan. The next morning we repeated the process. After only five minutes of riding on the motorcycle, we saw a small roadblock. I saw one of our Indonesian guides hand over some cash and then we proceeded to a much larger roadblock as seen in the upper right photo. 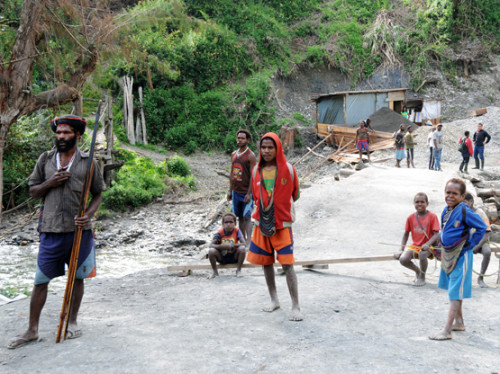 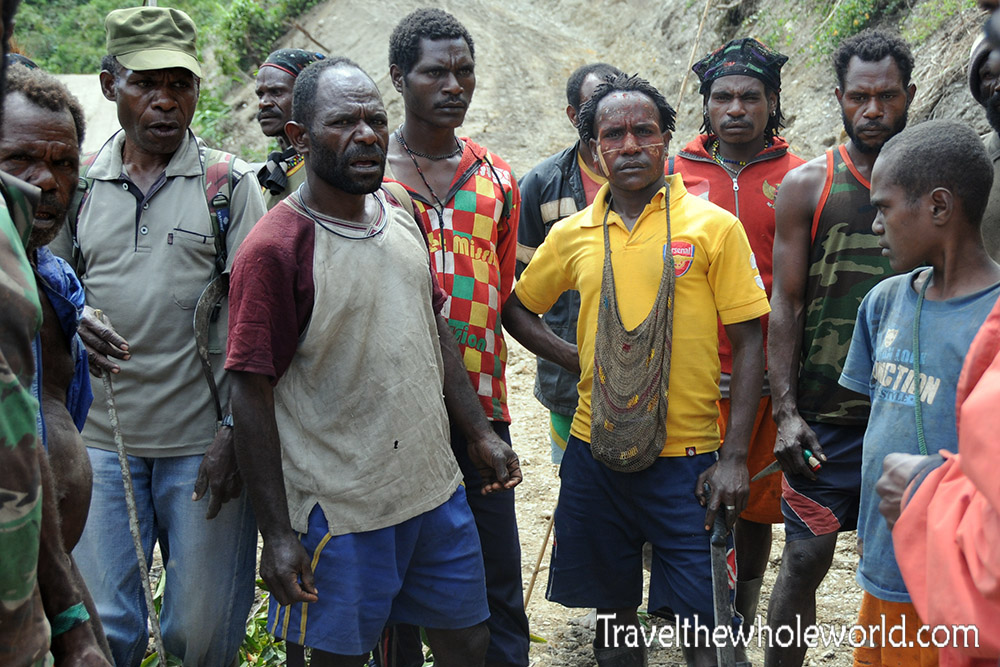 The second roadblock took some serious negotiating; we spent probably over an hour waiting while people argued back and forth. This included loud shouting at times. The photo on the upper left is right by the river where I was dropped off the day before, and the site of our third road block of the day.From the bridge we hiked the rest of the way to Carstensz Pyramid. The village of Sugapa is close to 7,000 feet in altitude, but the motorcycles dropped us off at 5,000 feet or about 1,500 meters. Despite being off the main road, the roadblocks continued to appear throughout the day and delay our progress. The photo on the right is not the fourth or fifth, but is actually the sixth roadblock we went into. I can’t explain how frustrating it was to sit anywhere between a few minutes to hours waiting to see if we would be allowed to pass. A lot of us wondered if we would be forced to lose another day, or even worse, not be able to attempt the mountain because of some type of escalation. 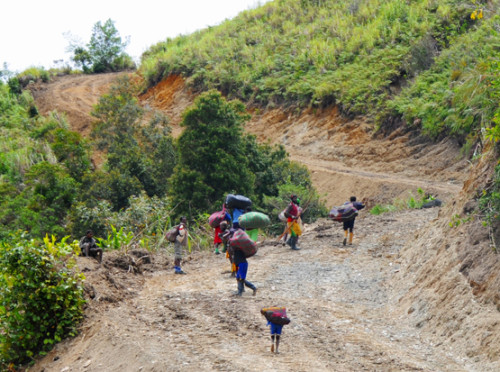 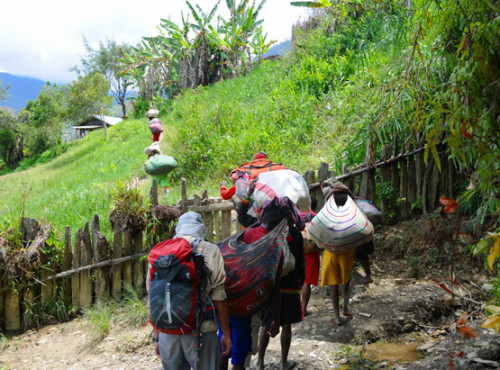 The road on the upper left was still being built which heads to our goal of Suanggama village. The top of the hill was as far as it had progressed. It seemed that each roadblock had a different method of defense or theme. One roadblock had logs on the trail, bows and arrows guarded another, and one roadblock simply had a defiant man take a leafy branch and stick it into the dirt. One of our roadblocks took place right by a bulldozer. I was actually disappointed when a native didn’t start it up and attempt to use it against us.

Once we got off this main road we made it all the way to Suanggama village without any other issues. Because of our wasted day yesterday today’s plan was to hike to Suanggama early in the morning and continue directly to Camp I located in the rainforest. The roadblocks turned what was supposed to be a two hour hike into an eight-hour journey. It impossible for us to make it to Camp I today.

Of course the question was in all of our minds; what would have happened if we would have refused to stop at the roadblocks? We were told we would be chopped by machetes if we ignored their protests. Two weeks after my trip here locals in Sugapa took a team hostage, and one was held in captivity for almost two weeks, so these guys are not all talk. The above photo shows some of the fences we had to cross once in the outskirts of the village. On the left photo are some of our porters carrying our gear. 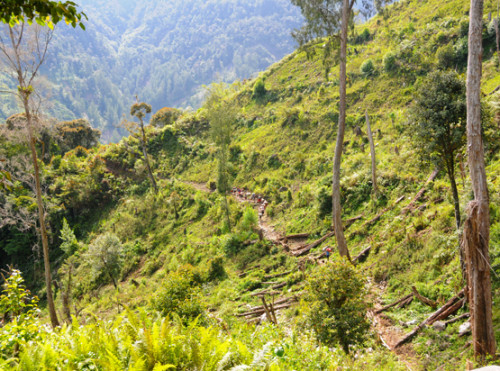 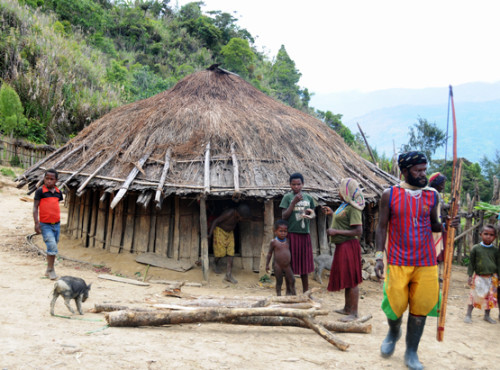 Staying in the village was an interesting cultural experience minus the sleeping. During the evening we saw the villagers preparing meals and playing with their kids. We usually had a huge crowd watching us curiously. I wondered if the locals here thought the six of us on this trip were out of our minds for wanting to hike through the rainforest and climb a mountain. They must have thought there were much more interesting things to be done in life.I was aware of a lot of tribal fighting on this island of New Guinea, but the village and tribe here seemed peaceful enough. My biggest fear was sleeping at night in the hut. Loud noises and nasty creatures came into the hut during the night, and a few of them touched me. There were smooth things, furry things and clicking things. At one point in the night, I had extended my arm to the right felt something soft which slowly walked away. Maybe since I was half conscious I immediately took my hand out of the sleeping bag and tried to feel in the area where my hand had just been, but whatever was there was gone. Needless to say, I was excited that I would be sleeping in a tent the next night!

The Adventure Continues! From the villages to the rainforest!