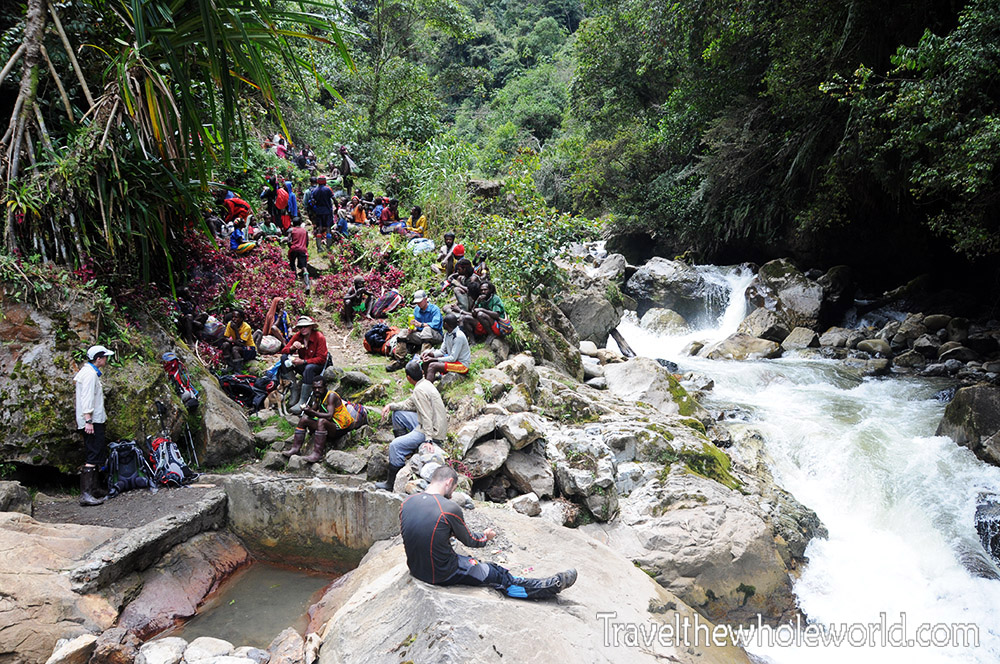 >On day 3 we left Suanggama to head into the bush where our trek officially began. After a few hours I definitely felt like I was in the jungle and was happy to finally be on my way towards Carstensz Pyramid. I was surprised by how many people we had picked up for this expedition. We had nearly 30 porters, just to support six climbers! Above is our entire expedition taking a break by a river. You can see why this is such a big deal to the locals to have a climbing team coming through. I doubted we needed half that much support, and most probably negotiated their way into a job. As a matter of fact, earlier when they hadn’t let us cross into the jungle we had internally debated about why we couldn’t skip porters and carry all our own gear, which of course the locals would have never allowed. If the porters are each paid a few hundred bucks for their two week journey it becomes obvious why this trip is so expensive. 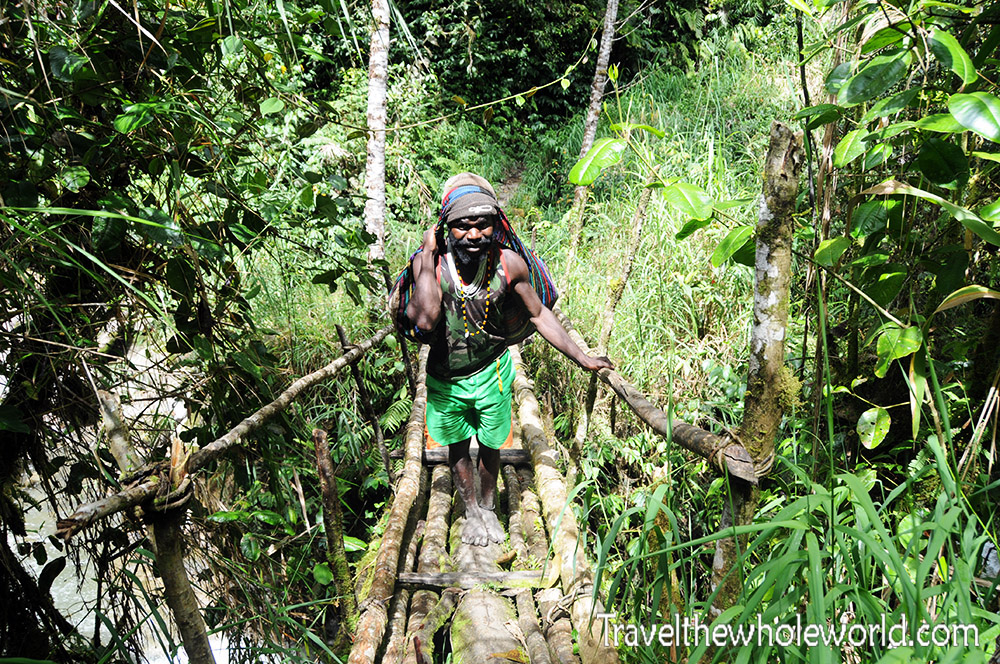 Once in the jungle we had lots of streams and rivers to cross, but all of them had bridges created by the local people. Above you can see one of our barefoot porters carrying supplies across a bridge. 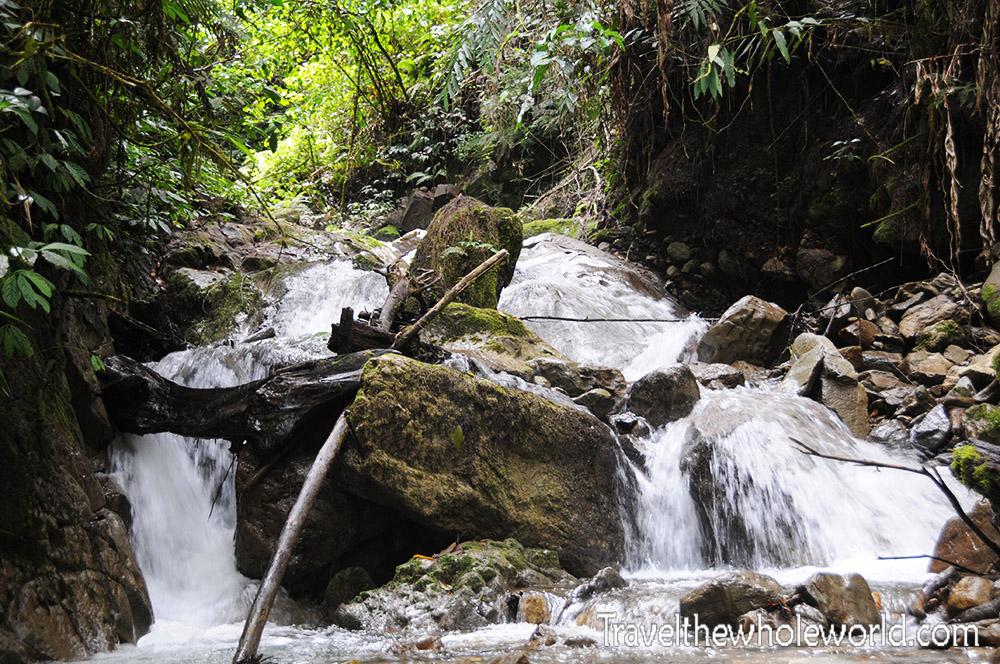 Here’s a shot of one of the fast flowing creeks I crossed. Without the native bridges these would be extremely difficult obstacles. We’d probably spend hours trying to figure out how to cross every single one of these. The porters forcing themselves into our expedition was actually fair since we had to navigate through their their land and footbridges. 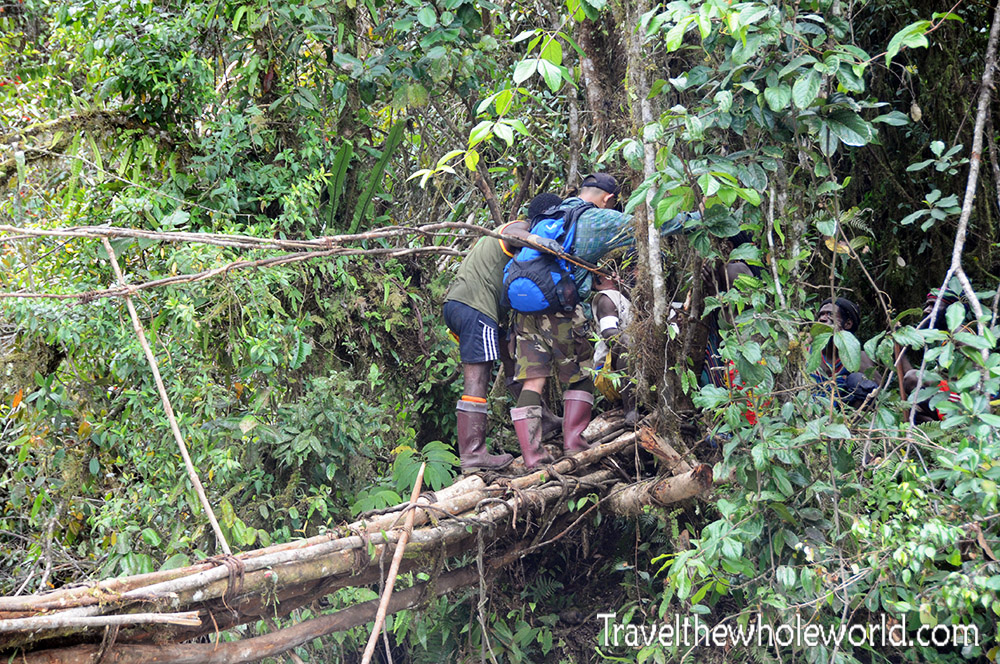 The road blocks we had experienced in the town were one of the most aggravating experiences I ever had. I assumed once we were in the jungle all that had come to an end. I was really disappointed to have another road block by some natives guarding one of the bridges. One of our Indonesian guides above attempted to negotiate while we had to wait around for a few hours. I had no idea if there were ten more roadblocks after this, but luckily this was our last one one! 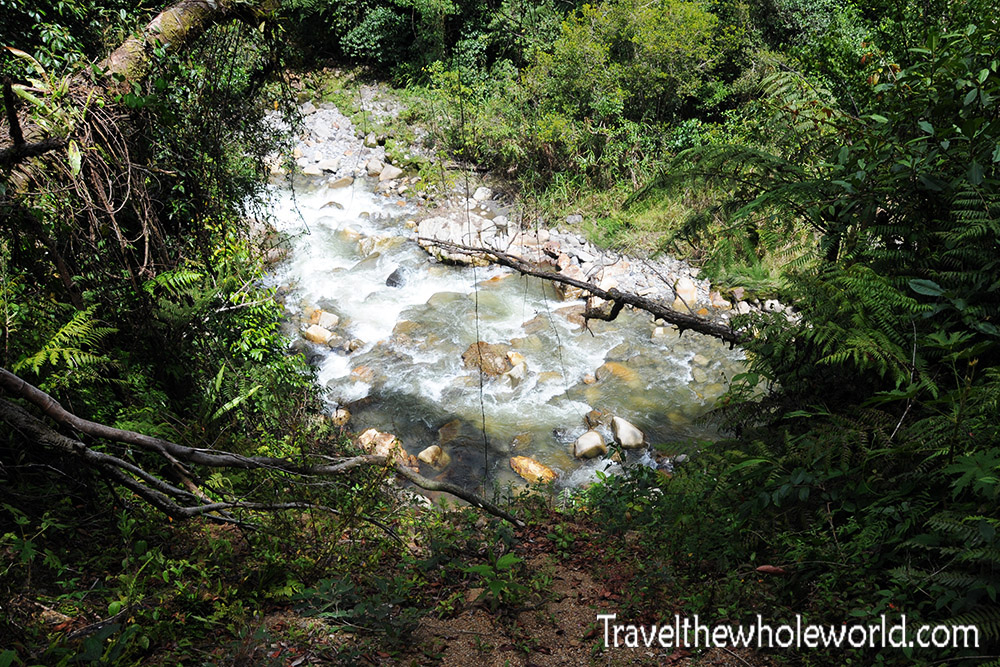 Aside from the annoying road blocks we had early in the day, the terrain was difficult and came with plenty of dangers. In this photo there was an exposed slope you had pass by with a drop of over 25 feet (8 meters). The terrain was also slippery so if you were to have a fall here you probably wouldn’t die, but you might break some bones and certainly wouldn’t be able to stay on the expedition. 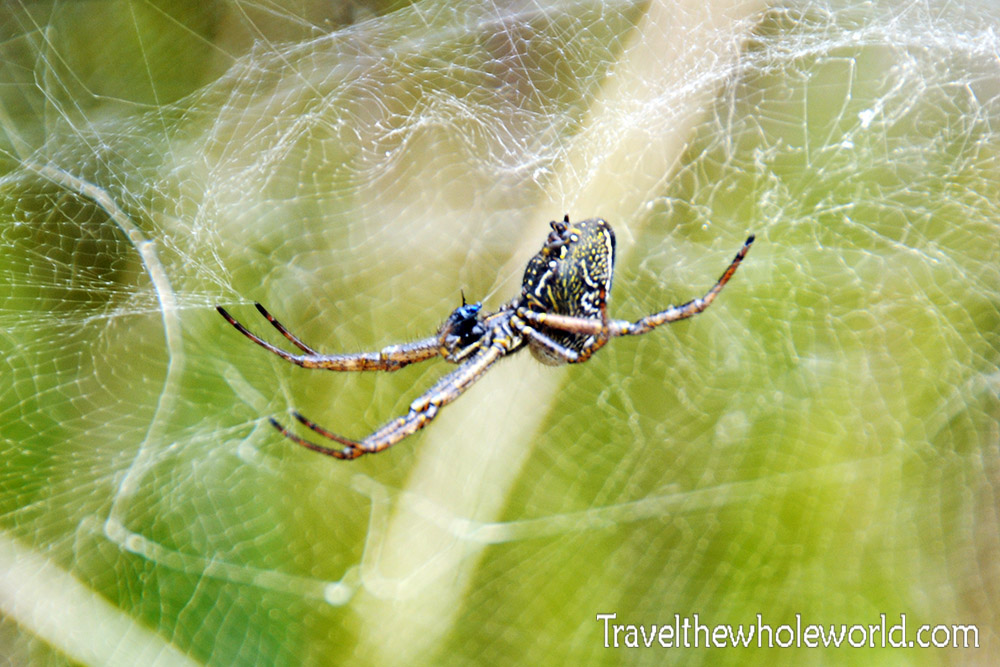 The plants and insects were another problem; I had touched a few sharp plants on accident for support or fell into them only to get tiny cuts. I continued my trek hoping that none of them contained undiscovered poisons that would cause excruciating pain and/or sudden death. This spider was in a field we came across that suddenly opened up in the rainforest. The trail on both sides was lined with some of the thickest spider webs I’ve ever seen. The massive makers of the webs were sitting right in center like the guy on the upper right photo. I have no idea if this one is poisonous or deadly. 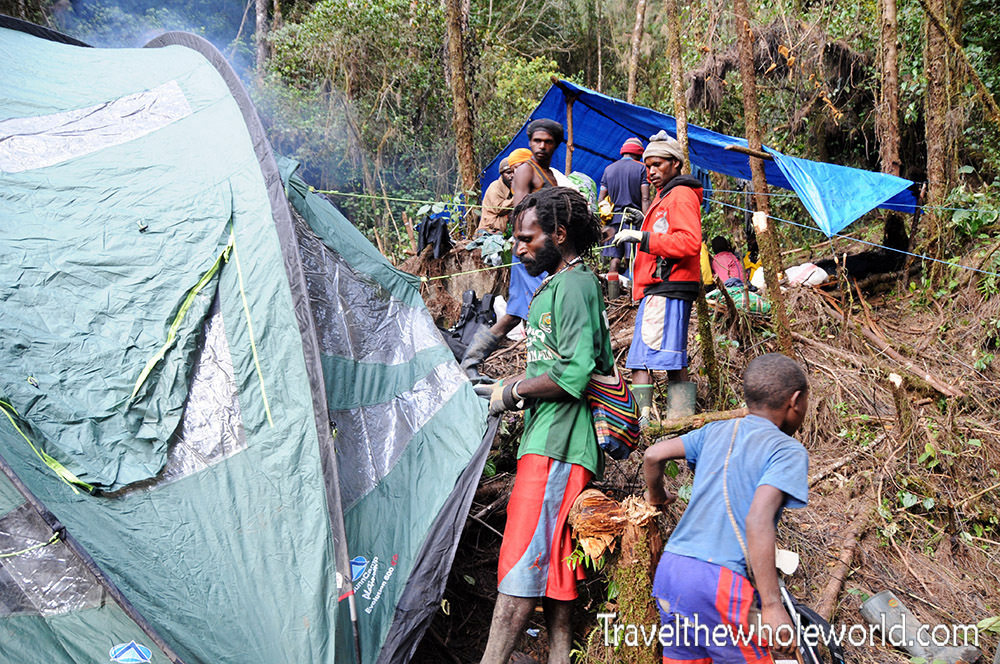 After a long day we reached Camp I which was nothing more than a hill with vegetation cleared away to make room for our tents. The thick overgrown rainforest surrounded us, and there was hardly any space. We were forced to place our tents in less than ideal areas. Some of them were set up in little pits that looked like they would flood with water if it rained. Above are some of the porters setting up the cook tent. 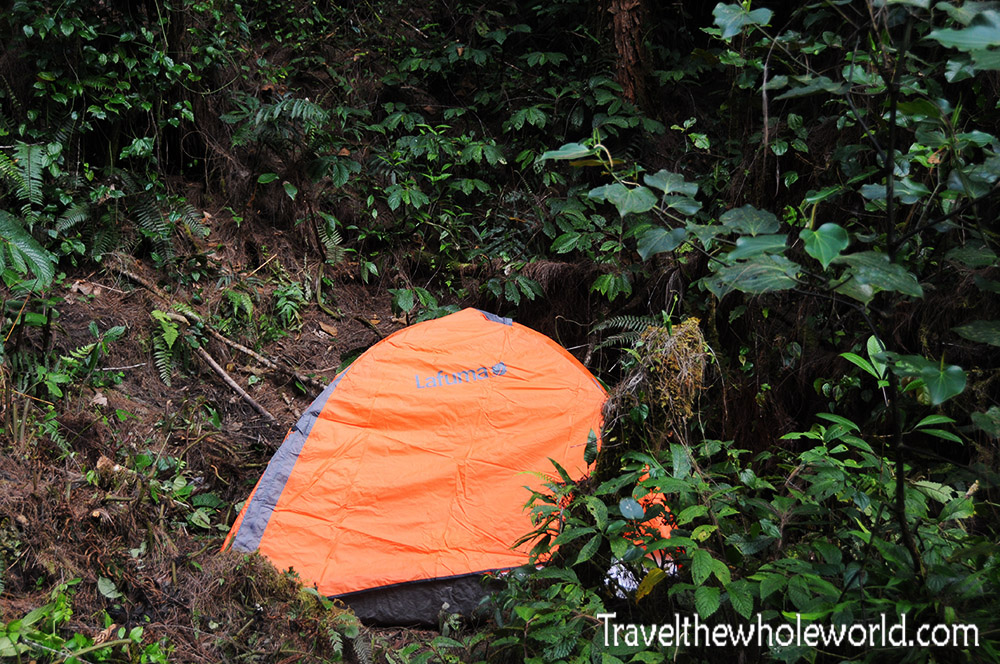 The hiking today was a serious challenge because we had so many up and downs with the terrain. The altitude gain was almost 2,000 feet from where we were dropped off by the motorbikes, but we had probably truly gained 4,000 feet if you added all the steep hills we had gone over. All we had essentially accomplished in the past two days was return to 7,000 feet or the same elevation we had been in Sugapa. This was discouraging, but at least tomorrow we would be reaching new altitude. The hike today was exhausting, but luckily there had been no rain. I got into my tent dry and comfortable, and it was warm enough to sleep with only a t-shirt and shorts on. At night I was visited by a curious frog that walked between my rain canopy and the tent itself. 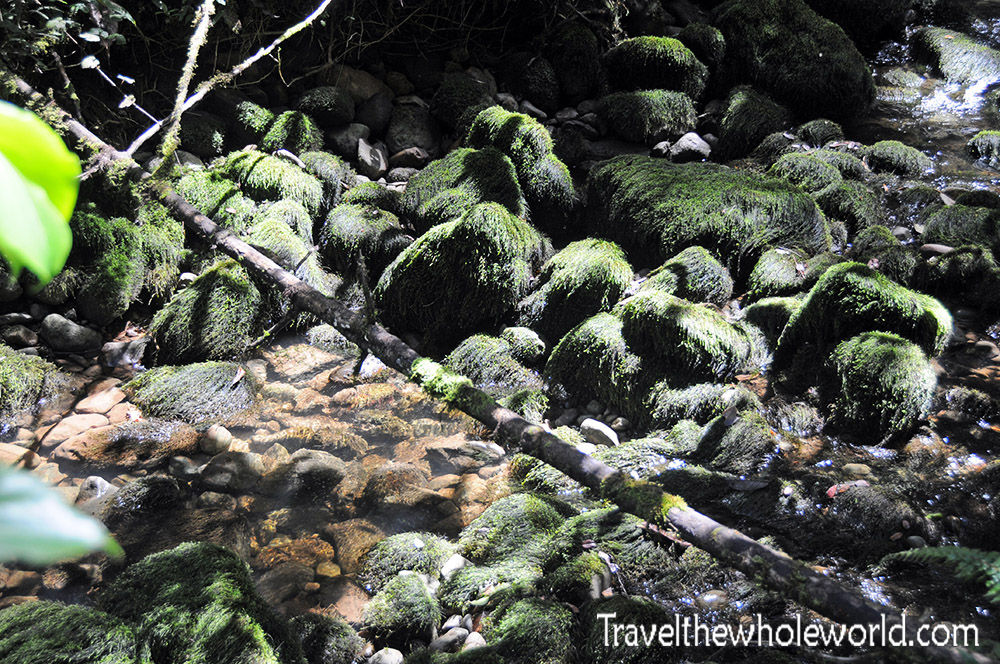 The next day the rainforest brought even more difficult terrain. There were more streams to cross, and mud was becoming a serious problem. We weren’t following a real trail like you would in a national park or other popular areas. Instead we were simply following footprints in the mud and climbing over fallen trees.

Sometimes the roots of trees would create a huge entanglement rising several feet high and you’d have to use your hands and knees to climb them getting cold, wet mud all over yourself. By now we were over 8,000 feet, so it was extremely tiring having to pull yourself out of the mud using both your hands and legs every few steps.The best analogy I can give is try to imagine how difficult an obstacle course can be. They are usually only few hundred feet long, so imagine doing that at 8,000 to 10,000 feet but for several miles.

Above is a photo of a mossy creek we crossed. Below is a slippery log that formed part of our trail and was actually several feet above the ground. In addition to everything being so slippery and wet, sometimes vines would even act like trip wires and catch around your boots. It seemed each step we took in the rainforest there was a chance to sprain an ankle or even something more serious. I had a real concern about slipping off a log or some injury that would cut my trip short. Later another expedition to the mountain who I kept in touch with reported sprains, broken ribs and other serious injuries. These worries weren’t unfounded! 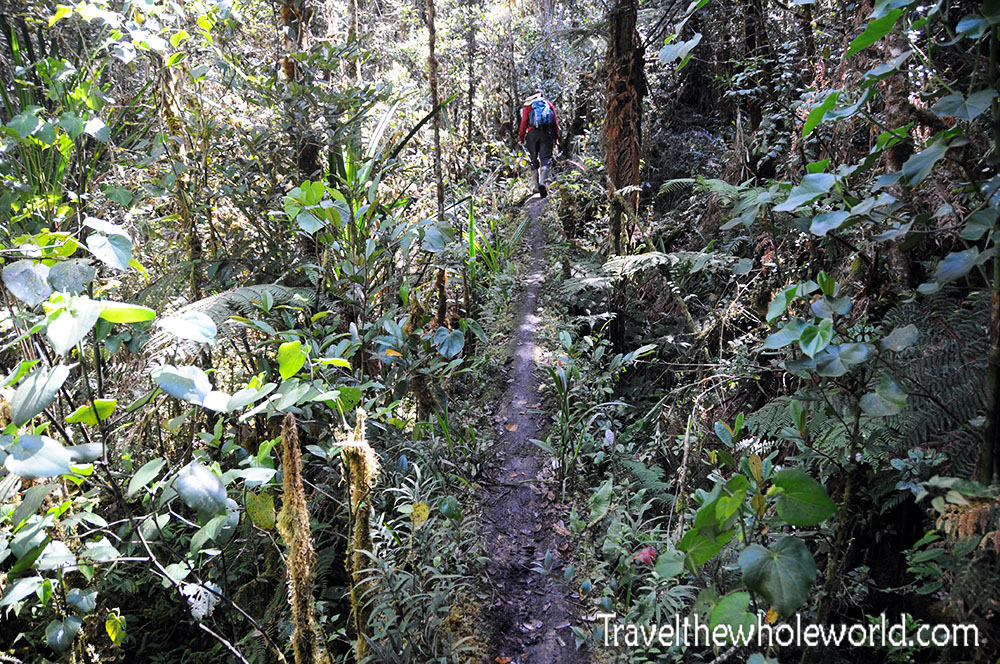 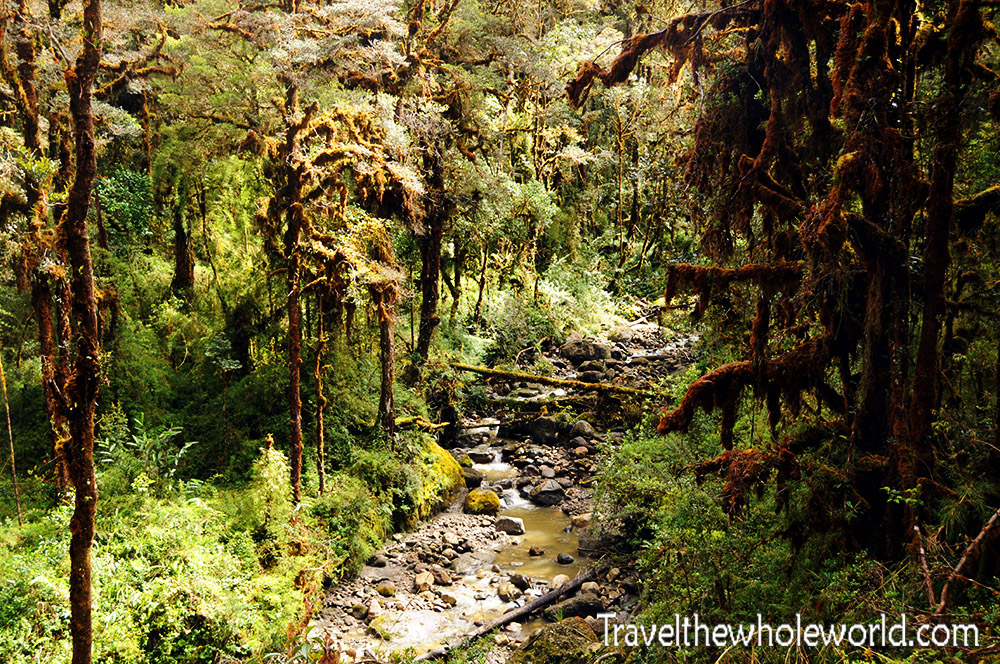 That photo I posted earlier of the mossy rocks in the creek was the first moss I came across. As we went higher into the rainforest, the moss began to take over certain species of trees as well. 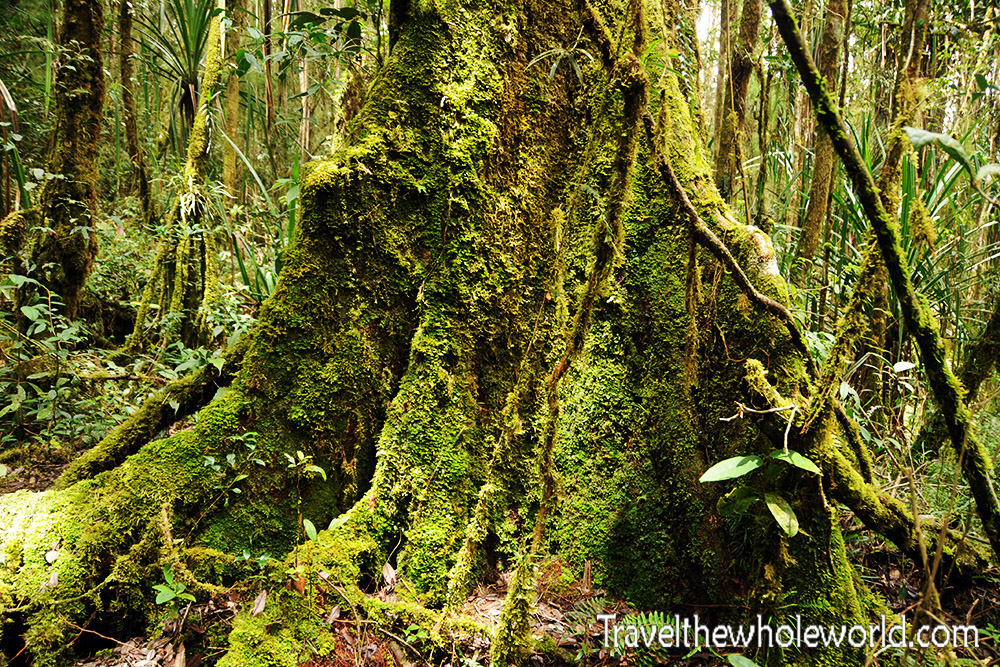 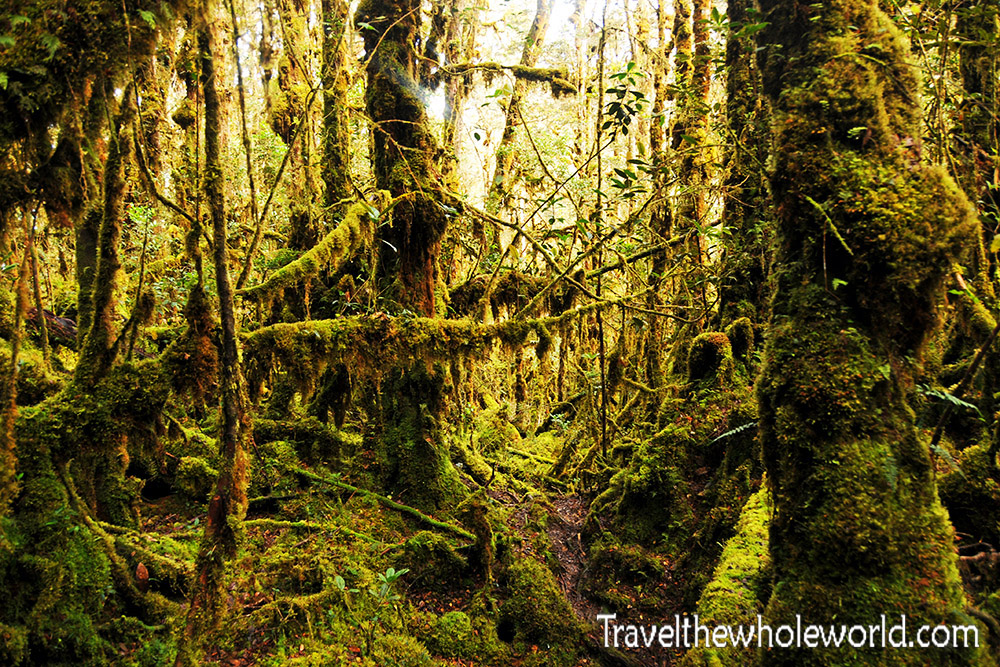 The higher we climbed the more the moss took over the forest until it practically covered everything in site. Nothing here can escape the moss except for the giant pools of sludge. 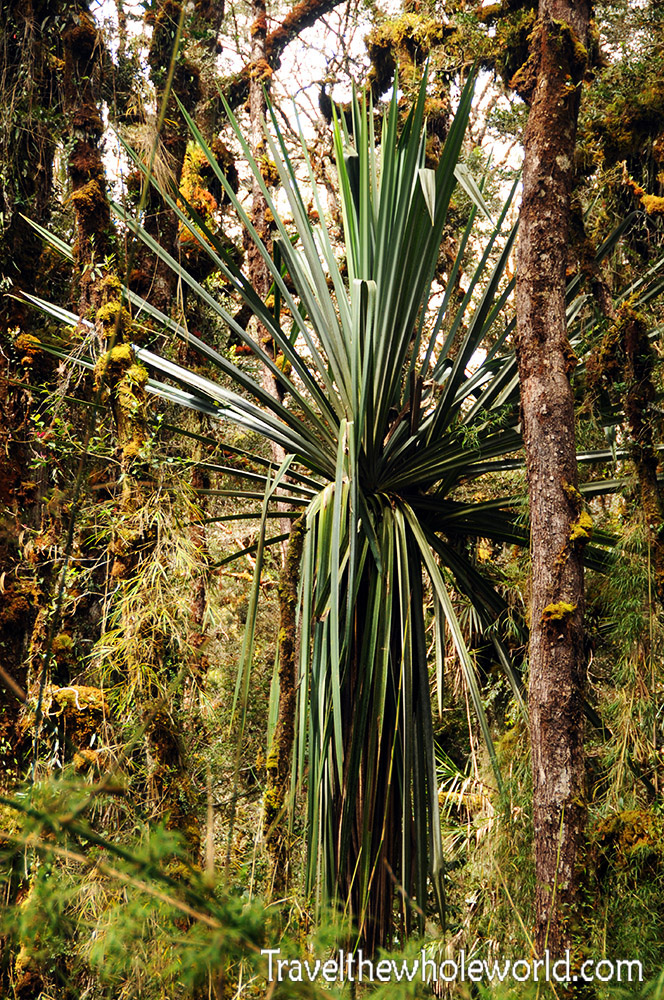 Seeing this palm like tree in the photo below was amazing for some reason. The moss seemed like a curse on the forest. The fact that one tree was able to survive felt like a glimmer of hope! Even though the terrain was changing it was not any easier in the mosslands of Carstensz. 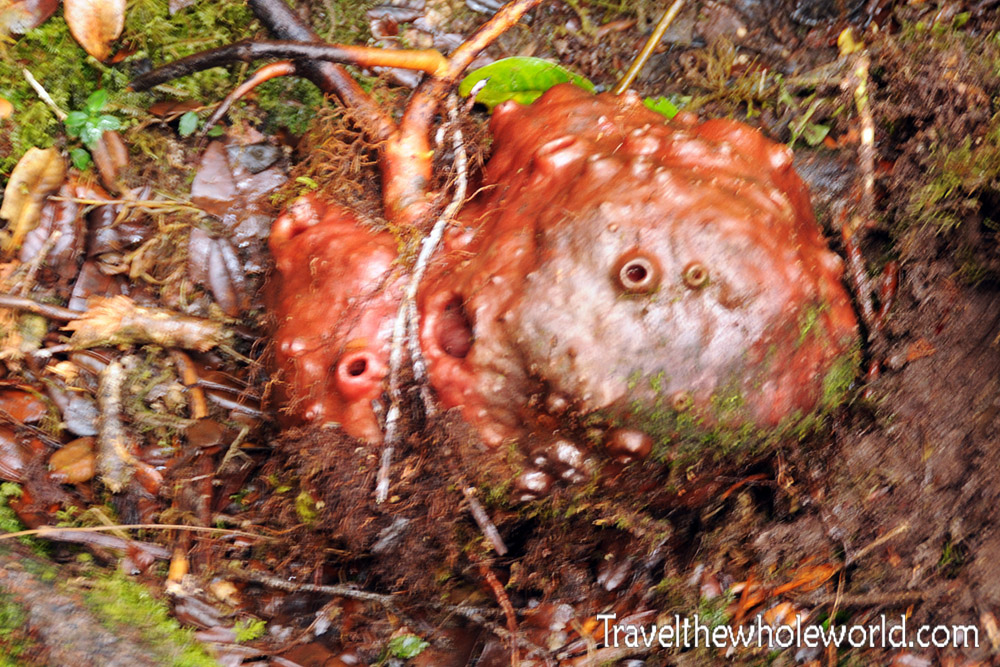 There was never a shortage of mud or weird plants in the mosslands. I had long heard the horror stories of hiking in these lands. I found the moss and mud to be interesting and exciting when I first encountered it. It didn’t take me long to hate it, and just when I thought I couldn’t take it anymore it began to rain hard. I can’t emphasize how difficult negotiating the terrain is here, I’d much rather traverse a glacier at 17,000 feet (5,000 meters) than fight the dirty elements and trip wires here at 10,000 feet (3,000 meters). 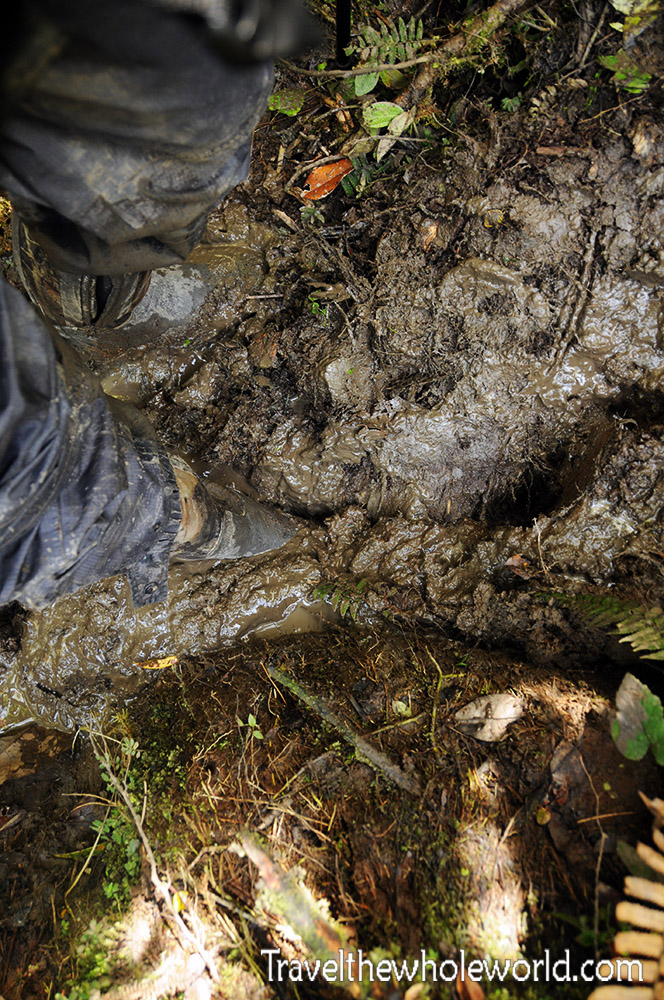 This mud above was only about 6 inches deep. I had occasionally stepped in mud that was as much as 16 inches deep, nearly three times worse than that photo! The final part of the rainforest was extremely steep terrain which felt like I was climbing a muddy ladder. Sometimes I was using my hands and knees to climb upwards. Occasionally I would grab a plant or root to have it rip off in my hand and nearly send me tumbling backwards. 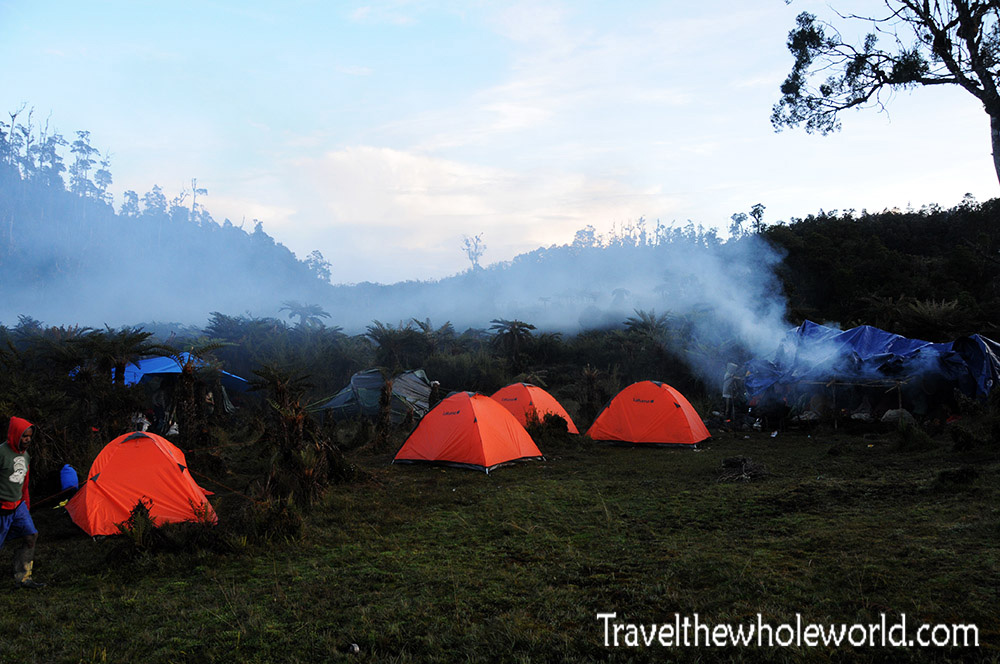 Another issue we faced was the distance between where you were and where your next step was. Sometimes this was almost two feet higher than your previous step. So you’d have to put your foot as high as you could and take giant steps which really killed my thigh muscles. The rain was really annoying too. It almost seemed like I was climbing a muddy waterfall at some points. Nothing lasts forever though. After an entire day of torture the rainforest opened up to a gloomy sky, and I stumbled upon Camp II. 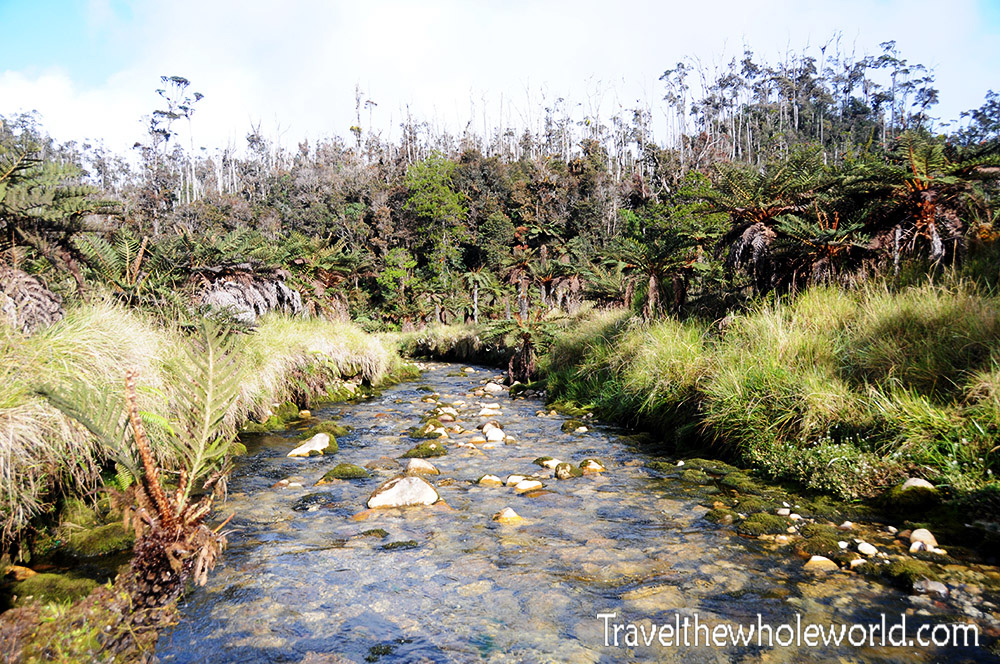 Camp II was around 10,000 feet (3,000 meters). Right by camp was a nice stream for cleaning and drinking, so I was able to walk in and get some much needed water. I also washed all the mud off of my pants, which seriously went up to my waist. 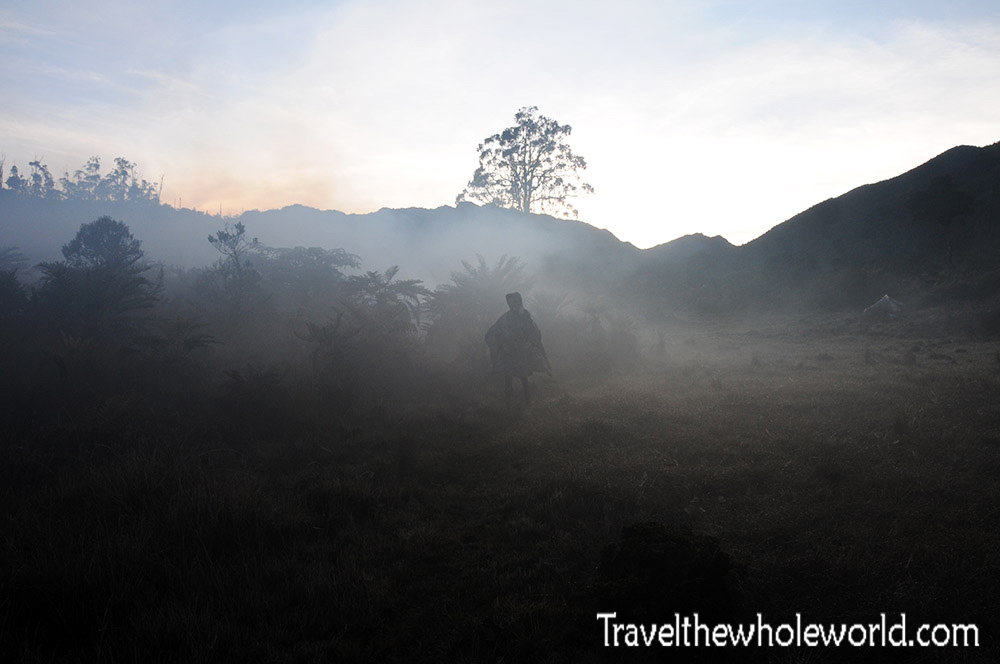 We had seen a confusing map of the area in Sugapa that showed the camps and direction through the rain forest to Carstensz Pyramid. While there seemed to be many contradictions, we had been told it was a five day trek to the mountain including the trek to Suanggama village. While in camp we endured fog and later some light rain and it was now starting to get cold. We had a deeply disturbing argument about how far we actually were from the mountain. This was especially concerning since we were already beginning to feel the effects of the expedition. Our understanding was that we had two more days until reaching base camp. The expedition leader came to tell us that this was in fact wrong and we had three more days. This was incredibly depressing, and maybe something as simple as a single extra day can show how horrible the conditions are here. Later after some more internal talks with the locals he came back and said he had made a mistake. We only had two more days left until we arrived to Carstensz Pyramid! 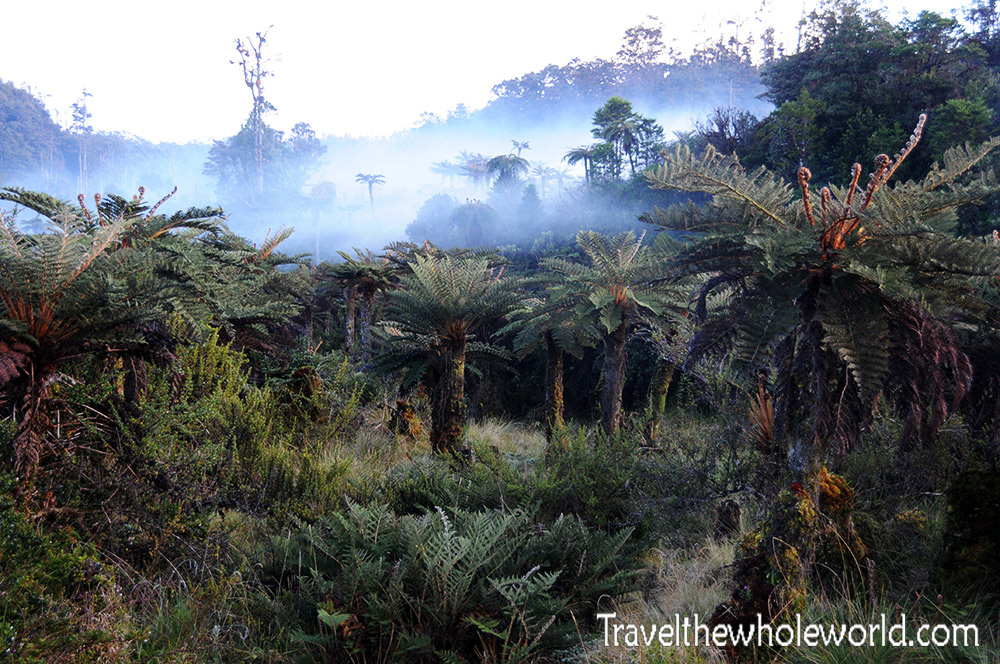 By morning the rain stopped but everything was just as muddy. Because of the altitude gain the cold was enough that I couldn’t get away with a single layer on top anymore. Above is a shot of Camp II in the morning. 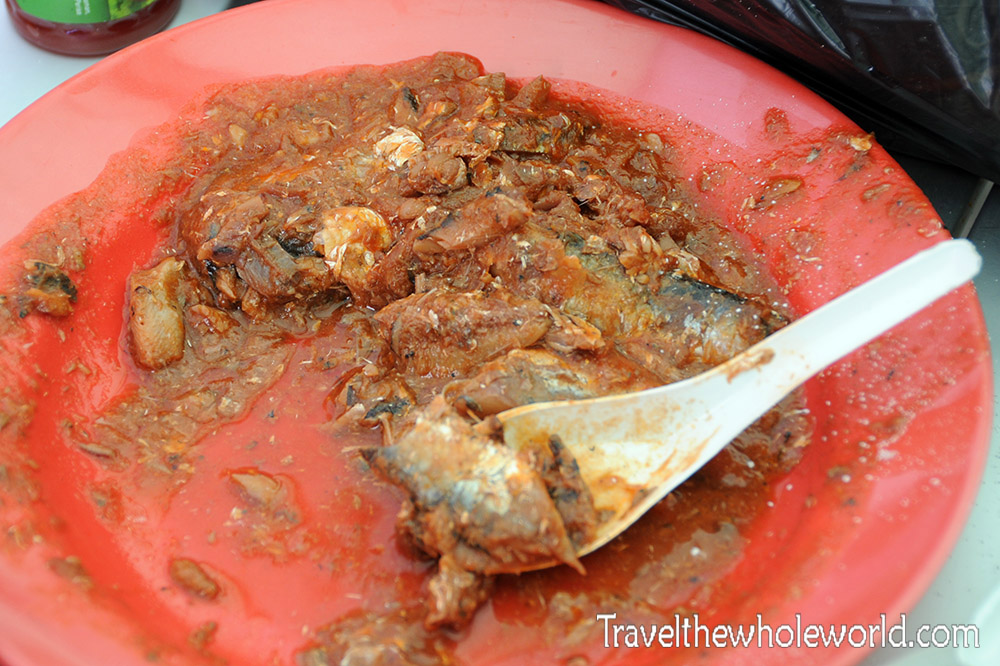 I realized that after a day in the jungle and two days in the rainforest I had developed some nasty blisters on both of my heels. They were bad enough that they made it painful to put my boots on and to walk. I now had the added challenge of forcing food down and walking in pain to the next camp. I was worried about my blisters getting progressively worse as the trip continued, and what the combination of cold, wet mud and unidentified germs, thriving inside my boots, might do to me. And the food by the way wasn’t quite my taste. I found it extremely difficult to eat because it was just straight up nasty.

The Adventure Continues! From the rainforests to the highlands!